Too wet to whoosh! 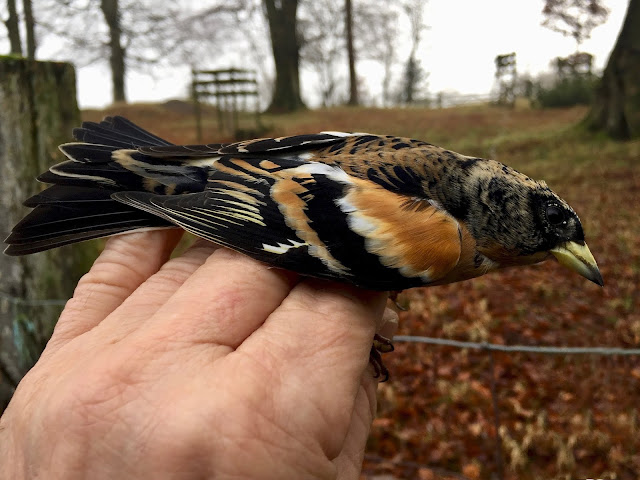 
Over the past few weeks we have been having great success targeting a large invasion of Bramblings. These attractive finches are irregular visitors in large numbers to the area's many beech woods when beech-mast crops are high. Two sites we operated on the last big invasion in 2013/14 (catching just over 400 birds) once again saw good numbers present as has a new site. These three sites combined have so far yielded over 1,000 new birds ringed and 4 controls - 2 from Norway, 1 from Belgium and 1 same season movement within Wales. 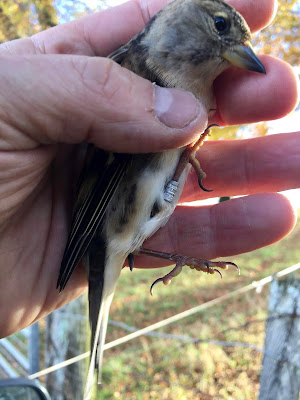 Most birds have been whoosh-netted but unfortunately dry conditions are essential for whoosh netting and we haven't been getting a lot of those recently. This morning I sat and watched for over half an hour whilst literally hundreds of Bramblings helped themselves to the free hand-outs on the whoosh-net site. A new bird-food order was placed this afternoon!


The weather in a couple of days time is looking dry so watch this space!
Posted by Tony Cross at 14:00 2 comments:

Despite being a relatively common species in the UK, we rarely get to catch Common Crossbills. We have a couple of sites where we try most years to trap them, but given that their number fluctuate greatly and that we have to rely on a number of other factors to be able to catch them: no wind, not too much surface water, their drinking ponds to have water in them and most importantly the birds have to be present.
Today was one of those days where everything fell together. As we were setting up the first net, I could hear Crossbills nearby. As we arrived at the second net site I could see some already coming down to drink (I was actually a bit annoyed that we hadn't set that net up first). Unfortunately they flew away as we started to set up the net. I was hopeful that they would return. To my amazement, just after we finished setting up the second net we walked past the first net (just 5 minutes after setting it up) only to find 9 birds in there already - all of them were Crossbills!! I was hoping we might catch one - as I always am when we come here, but to catch 9 was just incredible.
To show just how good this catch was, we have been coming to this site several times a year for the past 8 or 9 years, and in that time have only ever trapped 19 Crossbills in total (4 in 2010 and 15 in 2011)! Hopefully it won't be another 7 years until we catch some again. It definitely makes up for all those occasions when we didn't catch any. 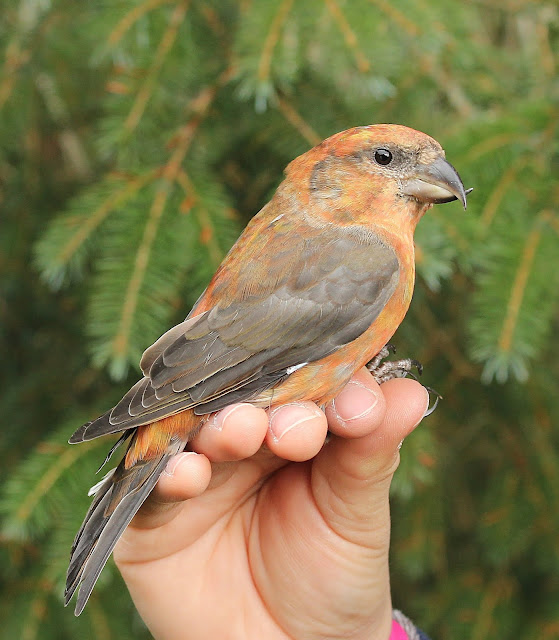 Other birds trapped during the 1 hour that we were there were: 5 Siskin, 3 Goldcrest, 2 Coal Tit and 1 Dunnock.
Posted by Paul Leafe at 16:06 1 comment: 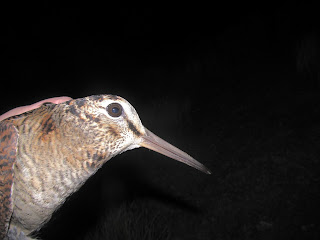 Posted by owen williams at 20:55 No comments: 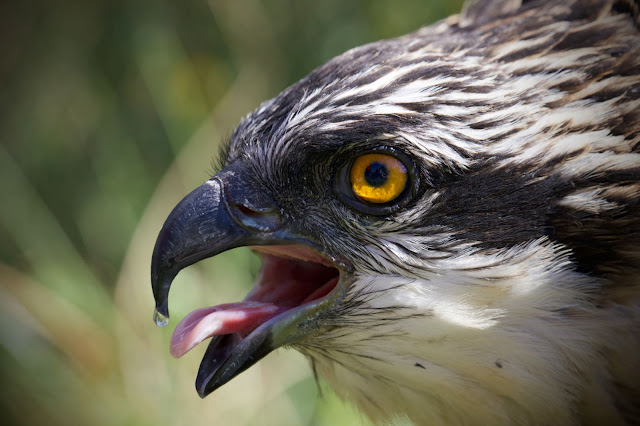 
Apologies for lack of postings recently, the fine weather has meant there has been very little downtime so far this year!!

Below is a link to 3 videos of the ringing of three of the five known Welsh Osprey nests this year. One additional nest is known to have failed and the remains one will hopefully be ringed by other ringers soon, giving, as far as we are aware, complete coverage of all Osprey chicks reared in Wales in 2018.

And, just for fun, there is a link to the Dyfi Osprey Project chick naming ceremony! 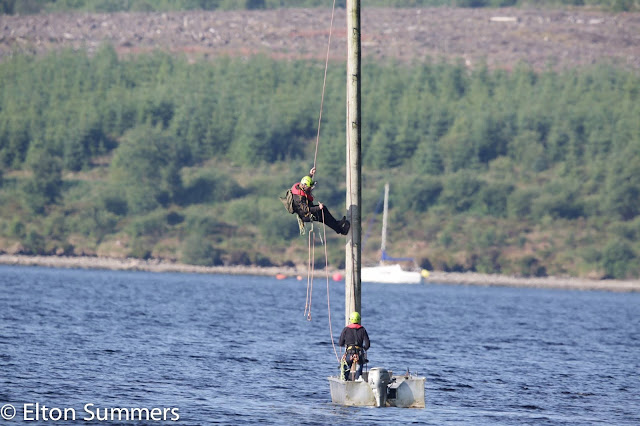 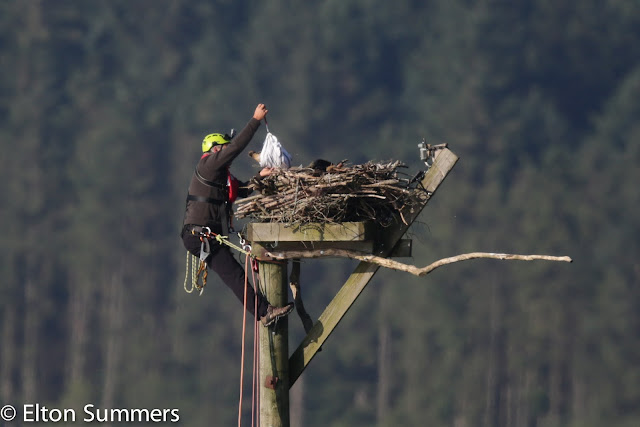 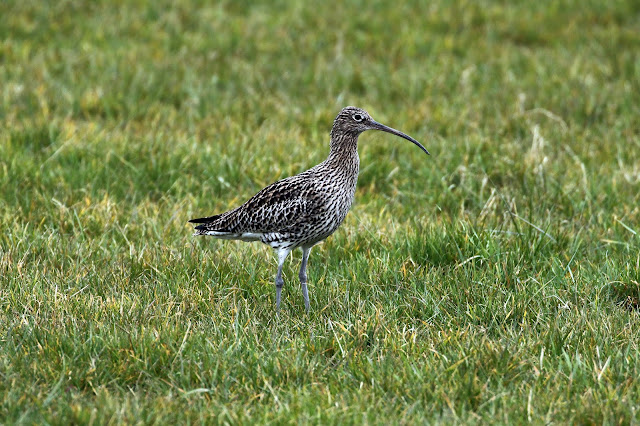 Curlew nest monitoring and protection is in full swing at the moment with several nests fenced and 50 eggs safely installed in incubators - fingers crossed for a good hatch.

Here is a link to our current Curlew Cam nest in a silage field in South Shropshire, enjoy it while you can!

From Russia with mixed emotions!! 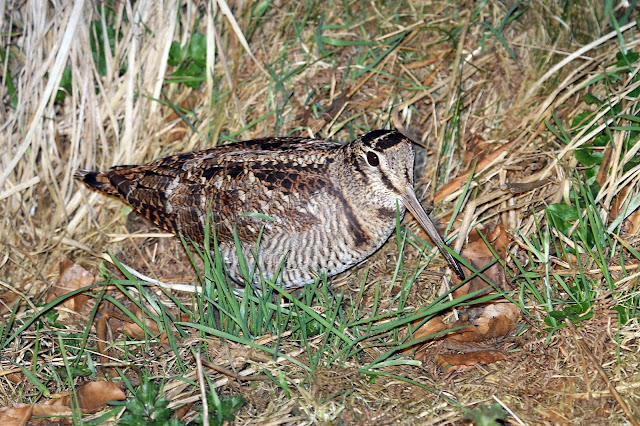 The Woodcock that winter in Wales are mostly winter visitors from the continent and we have had many recoveries from our targeted ringing of this species over the past few years to show where exactly they come from. This May though has seen an exceptional rash of Russian recoveries, eight in total, including what is probably the furthest reported movement ever for a BTO-ringed Woodcock at 6,267kms. This massive movement was made by a bird ringed on the University Farm at Trawscoed near Aberystwyth on 4th January 2017 and recovered on 13th May 2018 50km north of Krasnoyarsk, Russian Federation. As can be seen from the map below that is north of Mongolia and about halfway through China!!

These recoveries are received with mixed emotions, on one hand they yield important data on Woodcock movements and hunting pressures but on the other they are all shot birds so will not be making any return journeys! Should you be a shooter reading this, next time you raise your barrel at a flushed Woodcock just take a couple of seconds to wonder (in both senses of the word) how far it has flown to be in your sights, hopefully a couple of seconds should be just long enough!! 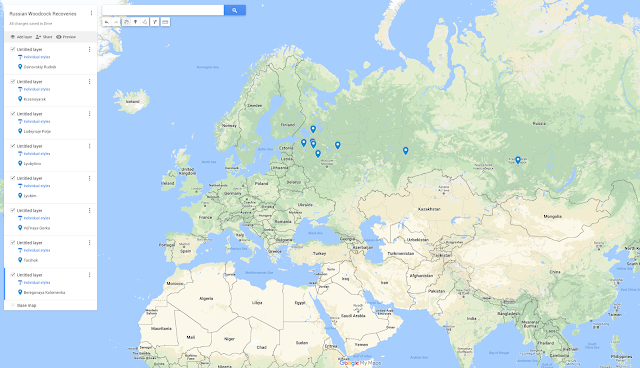 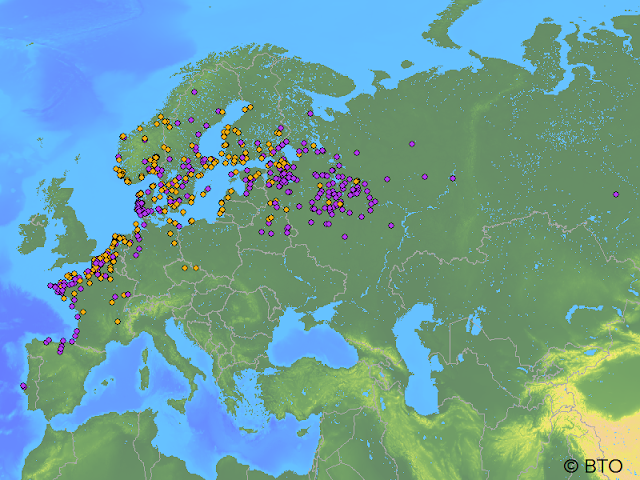 This time last year we were caught-up in a veritable Waxwing fest. A flock of up to 100 birds graced the local town of Newbridge-on-Wye for nearly 4 months. During their stay they were tempted down to strategically placed apples and all bar a few were caught and fitted with unique colour-ring combinations courtesy of Raymond Duncan of Grampian Ringing Group. During the process several colour-ringed birds were identified that had been ringed elsewhere including four from Scotland and one from Norway. Unfortunately, because the local apple supply was so good, few of the birds left us to wander further south where they might have been snapped by eager photographers as happened a few years back when they last invaded Mid Wales. Most stayed local until mid April and then presumably just headed straight back without being re-sighted or photographed on the way.

This winter sadly has been Waxwing-less - in Wales anyway. Despite this there has been some Waxwing action though as I have been batting poor quality photographs backwards and forwards with birdwatchers in Northern Norway and Northern Sweden in an attempt to identify colour-ringed individuals intent on hiding their identity. It seems not even the Beast from the East could tempt these birds to leave their usual Northern haunts this winter as we received not one but two reports of ex Mid Wales birds over 2,000km north of where they had spent last March in temperatures as low as -22 degrees C! Colour-ring sightings from this far north are almost unheard of, especially in mid-winter!

First to be reported was an adult female ringed by me at Newtown College on 4th February 2017 that was photographed on 30th January 2018 in Hammerfest, Finnmark, Norway by Bodil Brox some 2,431 kms NE 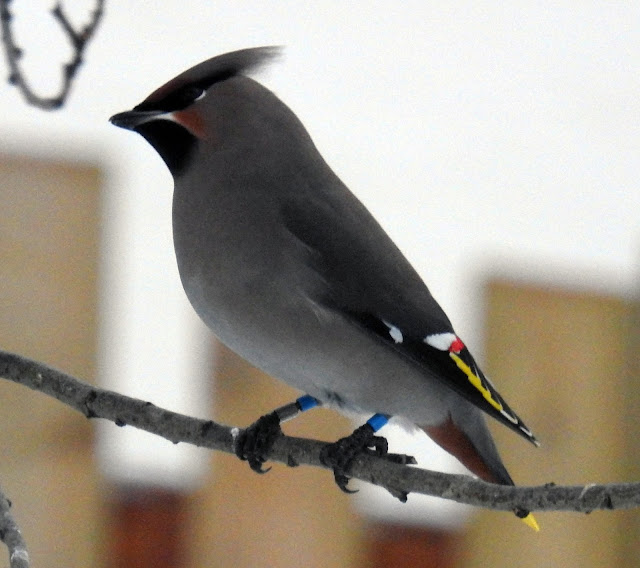 Then, amazingly, another adult female originally ringed in Ballater on 18th December 2016 by Grampian Ringing Group (but next photographed by me in Newbridge on 8th January 2017 - 539kms S) was reported on 25th February 2018 at Pitea, northern Sweden (2,025 km NE) by Sture Sandberg. 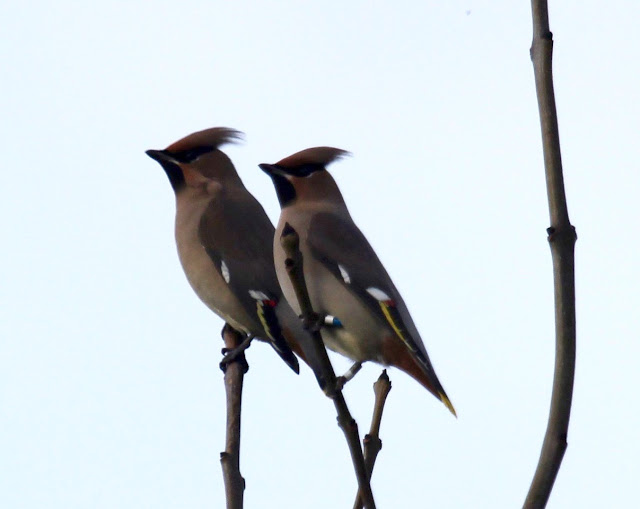 Adult female, ringed in Scotland, re-sighted in Wales
and then re-sighted again in Northern Sweden 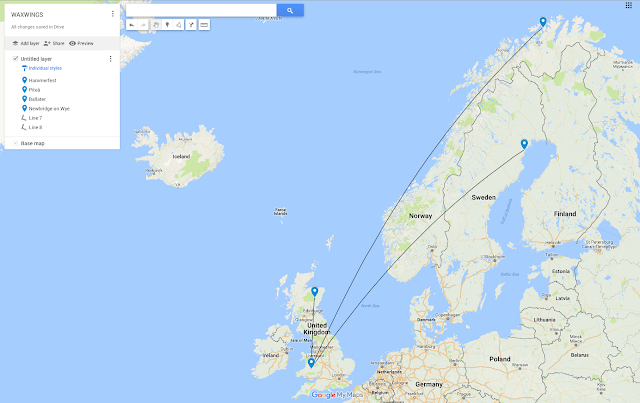 These sighting, so far north and in mid-winter, are exceptional and well worth all the effort spent catching and colour-marking these beauties last winter.

All out for Choughs!

Well the field season is really kicking off now!! Amy and I went down to Devon at the end of last month with Claire Mucklow (RSPB) and Peter Burgess (Devon Wildlife Trust) to help install some Chough nest boxes on National Trust property in the hope of encouraging them to spread from Cornwall or South Wales. 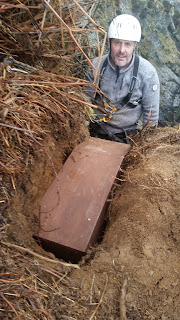 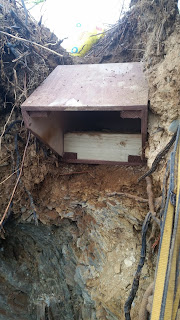 I then went straight to North Wales for a brilliant week with my Welsh Chough Project colleague Adrienne Stratford and old mate Tony Fox (Aahaus University) and his Danish colleague Henning Heldbjerg (Dansk Ornitologisk Forening) to GPS tag some inland-breeding Choughs. Using the 20 odd tags they have kindly lent us we are hoping, over the next few months, to trial a project to identify important feeding sites and investigate their foraging behaviour to try and determine why the inland Welsh population is in steep decline. Catching adult Choughs in snowy weather proved a challenge but we managed to catch seven and fitted tags to 6 known breeding adults. 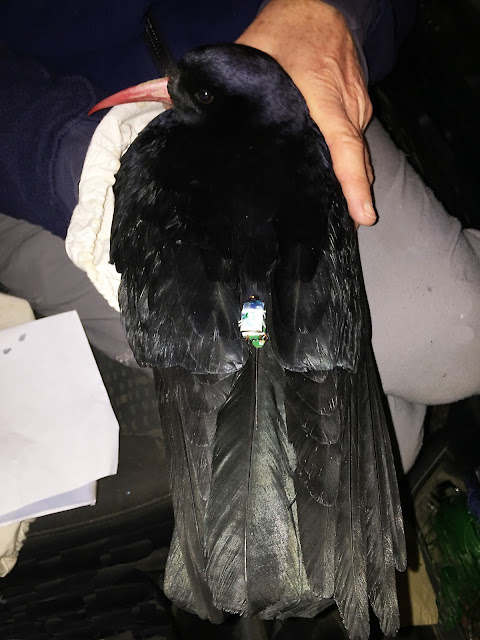 Four of the birds were previously ringed by us as chicks and ranged from 8 to 18 years old this summer! Was great to meet up with some old friends both feathered and unfeathered!!
Posted by Tony Cross at 16:08 No comments: