With strong winds and rain forecast over night, Silvia and I once again headed to a couple of our winter dazzling sites. As with Ophelia, Brian had seemingly 'forced' a lot of the birds to stay in more sheltered areas. Thankfully tho there were still a few birds to have a go at catching. The Golden Plovers were nicely spread out in the fields, and this made catching them 'easier'. I had just caught one of the Golden Plovers when I looked up and saw a different wader in the beam. I couldn't believe it, it was a Ruff (I know it's not the rarest of waders, but it's not something I've seen before while out wader dazzling in mid Wales). After giving me a little run around, I eventually managed to trap the bird. Although it appeared to be thin, it wasn't under weight so we ringed it and took some measurements before releasing it back into the sheep field. 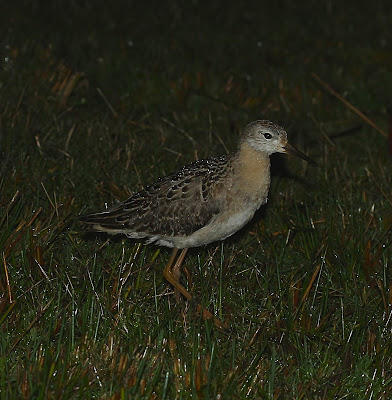 Last night Silvia and I headed out on to the hills of mid Wales, to a couple of our regular 'winter wader dazzling' sites to see what Storm Ophelia would help us catch. As predicted, the winds were very strong. This had clearly effected the number of birds that were feeding out in the open in the fields. Thankfully there were still some birds to have a go at catching! One of our target birds for the night was Lapwing as the group had recently received permission to start colour ringing them, and the colour rings themselves had just turned up in the post! Despite seeing up to 7 Lapwings at the first site, I couldn't seem to get near enough to catch them so I was beginning to think that we would have to wait to kick start the groups new project. Thankfully at our second site there were a few more Lapwings to try and catch. I altered my approach to the birds, and bingo within the space of a few minutes I had trapped 2 Lapwings. 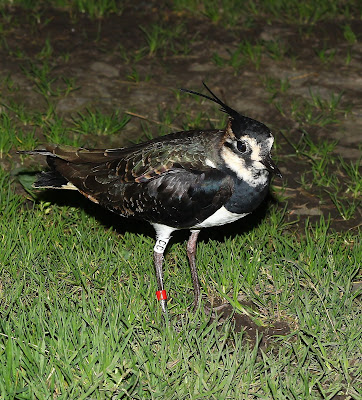 CA and CC became the first two Lapwing to have our colour rings put on.

All of the Lapwings we catch from now on will have a red plastic ring above the metal BTO ring on the right tarsus, and a white darvic on the right tibia with (for now) 2 letters in black writing. Since 2010 the group has ringed over 200 Lapwings without receiving a single recovery. With our coloring ringing projects on Golden Plover, Curlew, Whimbrel and Dunlin already giving us some fantastic recoveries, we're hoping that putting colour rings on Lapwings will increase our chances of recoveries, and hopefully help us identify where our birds are coming from, and why they are declining as a breeding species in this area!