Following a week or more of bright moonlit nights and an additional few nights of seasonal festivities I finally managed to get out again for a couple more lamping sessions. On a very wet and windy Boxing Day evening on the Ceri Ridgeway I had a very welcome double hat-trick with 2 Woodcock, 2 Snipe and 2 Jack Snipe along with 1 Fieldfare, 1 Skylark and a Golden Plover. This takes our annual total of Jack Snipe ringed to an impressive and nicely rounded 30. Then last night, Jane and I caught 12 more Woodcock (plus a re-trap) near Aberystwyth including  9 in one field! 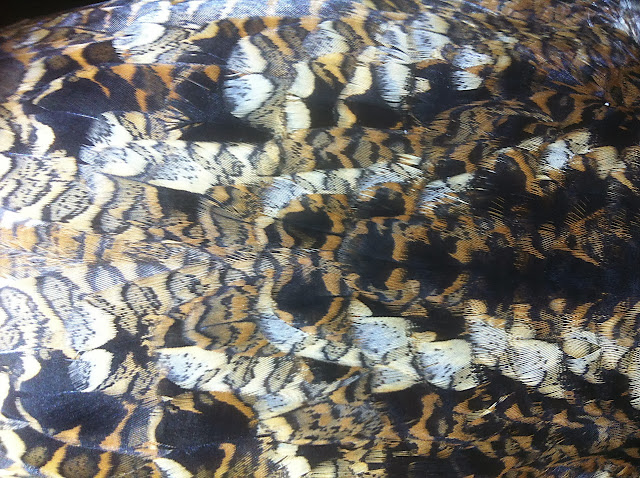 13 Woodcock in the hand last night - worth a few in the bush!
Posted by Tony Cross at 17:08 No comments:

A nice pair of hooters...

After Tony found a pair of Tawny Owls roosting in a barn a couple of months ago, we finally got round to have a go at catching them today. Our luck was in as both of them flew straight into a well placed mist net.

As you can see from the photo below, one of them was extremely grey in colour. It'll be interesting to see what colour the chicks will be next year if they stay and breed. 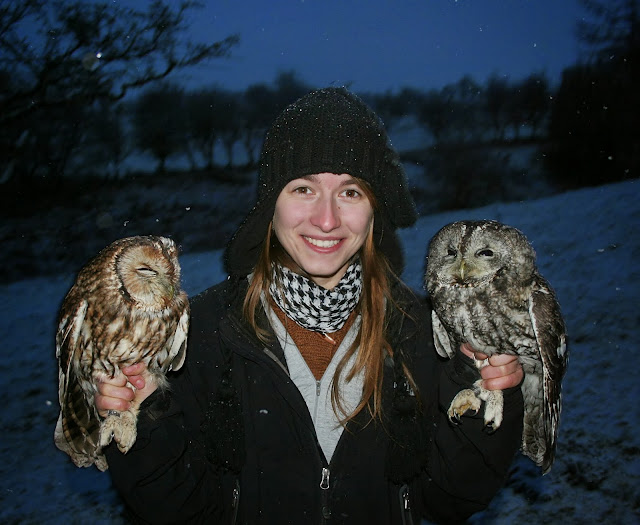 (one very happy Silvia getting the up-close encounter with owls I'd promised her)
Posted by Paul Leafe at 21:01 2 comments:

The weather finally turned wintery today, with snow falling at one of our Brambling sites. With the wind still blowing we opted for the woosh net instead of mist nets. This proved to be a good plan, as we managed to catch 35 (our highest daily total so far) new Brambling, taking our total catch in recent weeks to 91. 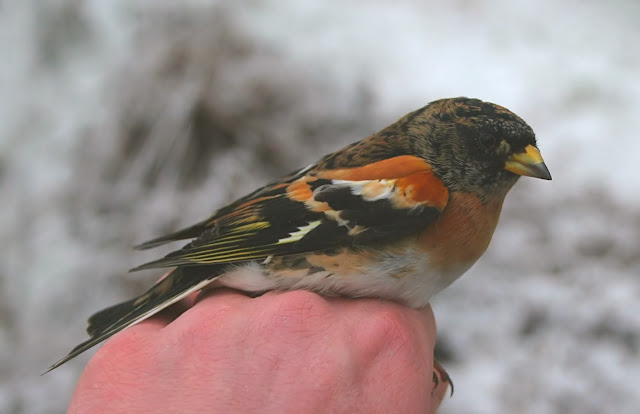 I doubt there have been many occasions where four Jacks have been trapped and ringed at the same time, but today was one of those days. After seeing several Jack Snipe while out lamping/dazzling on one of our ringing sites, myself and Silvia decided to have a go at mist netting them as they came in to roost yesterday morning. Despite seeing a couple of them, only one Common Snipe was caught. Time for plan C! So this afternoon we headed up there again, this time with Tony and his drag net. This proved to be a great plan C, as we caught three on the first attempt, and another on the second (narrowly missing a fifth too!!). A total of seven birds were seen, but I dare say there were more. We had also caught two more by lamping earlier in the week, so who knows how many birds are using this roost? 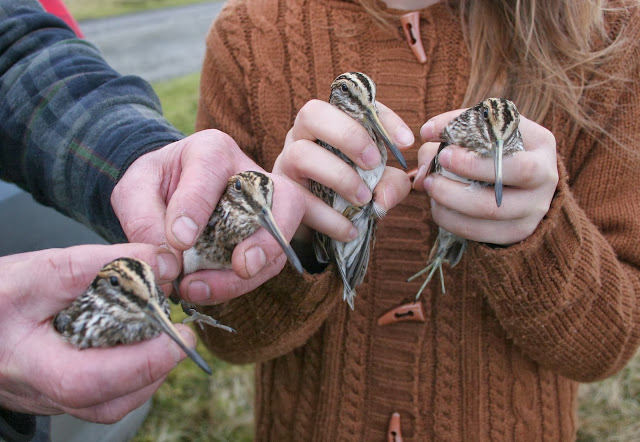 Of the four caught today, three were new birds and the other was a re-trap from last December. Despite catching 15-20 Jack Snipe each year, this was our first different year re-trap! And caught in the same field too. So maybe they are site faithful like the Woodcock that also winter in the UK?


The most reliable way of ageing Jack Snipe is on the under tail coverts. Large dark streaks on the adult (right) and much thinner streaks on the juvenile (left). 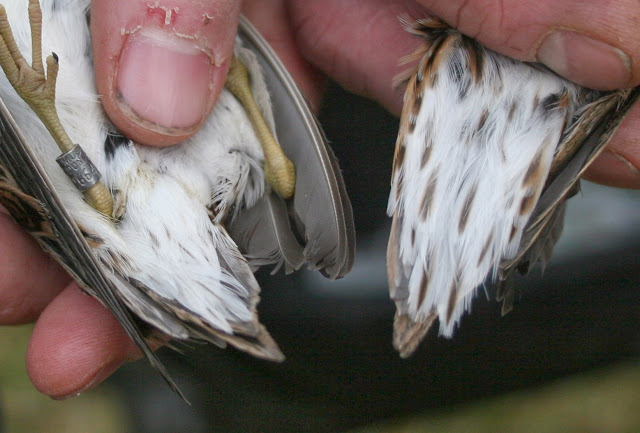 I have just had four days over in Ireland with Wicklow ringers Damian Clarke and Ann Fitzpatrick. Having been introduced to Dipper ringing on his trips over to Wales, Damian is keen to start a RAS project for Dippers in Wicklow but at present only has a specific A permit for raptors and Raven. I said I'd pop over and provide a bit of training for roost catching Dippers and also for lamping Woodcock to give them a bit more to do in the long winter months! Unfortunately the timing of these activities clashed somewhat with another favourite Irish pass-time although we did manage a couple!

Ireland has four distinct subspecies and whilst I was over we managed to catch three out of the four. Dipper is one, with the Irish race showing less chestnut on the breast and resembling a half-way stage between our dipper and the Black-bellied Dipper found on the continent. 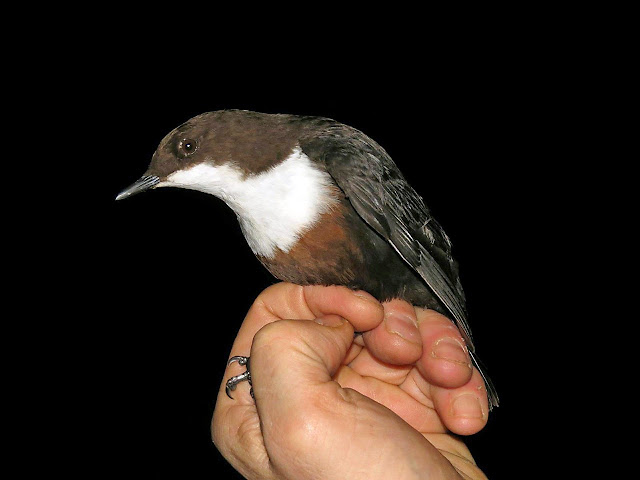 Irish sub-species of Dipper, with less chestnut on the chest and also slightly larger I thought. The largest one of the 55 we caught was 103 mm and the heaviest weighed 78 grams.

Irish Coal Tit shows much yellower cheeks than ours. 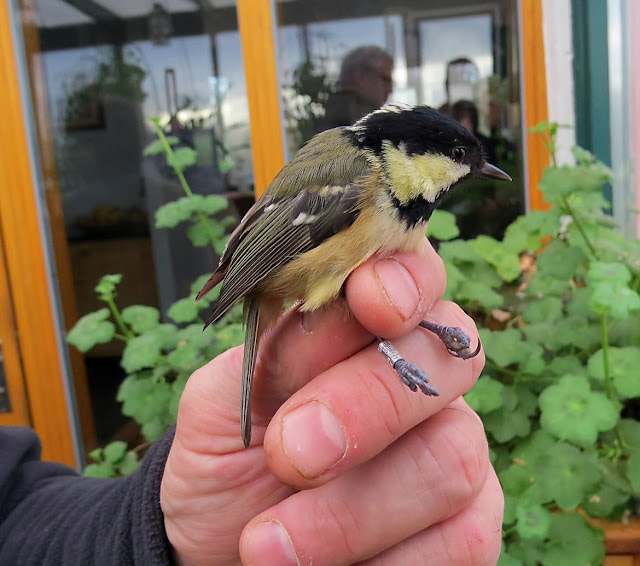 and not sure what the distinct difference is here as I've not handled enough British ones! Less famous perhaps! 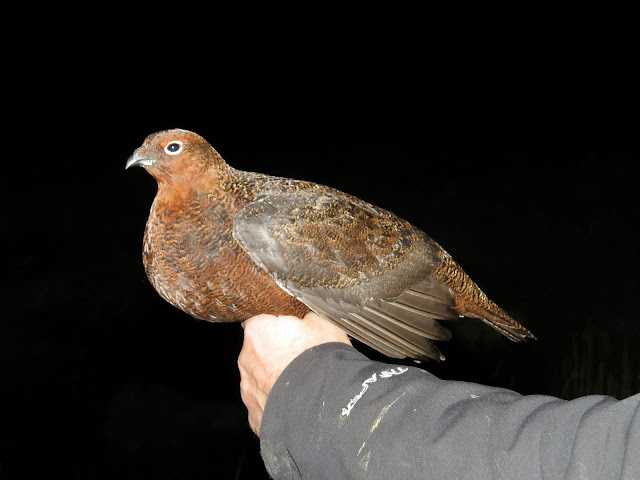 The fourth (elusive) subspecies is Jay. Didn't see any of them. 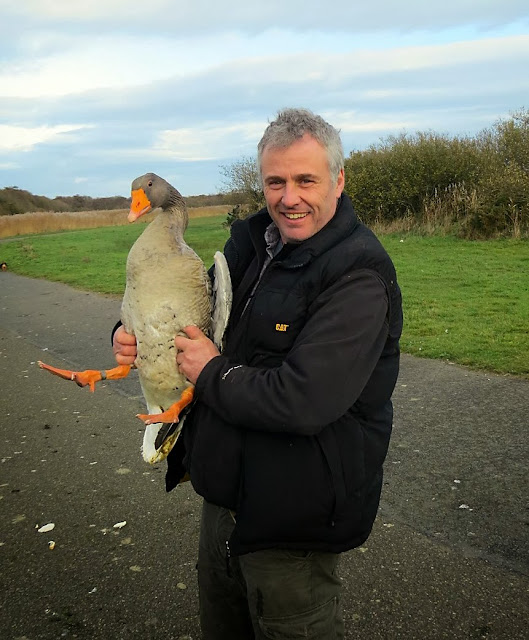 Greylag Gosse. We have these in Wales too but it was a first for me so all good training. Unfortunately I doubt it was one of those that come down from Iceland for the winter though!
Posted by Tony Cross at 21:51 No comments:

Back of the net!

Meandering back to Wales.

After a long wait I now have a map made up from the data from one of the woodcock geo-locators that I recovered on my ringing site last winter.


The red track shows the spring migration and the yellow the autumn migration.

What is fascinating is the fact that this bird spent the summer in two locations in Russia. It is quite possible that the location where it stayed between early May and late June was it's breeding location and then it re-located further south for a post-nuptual moult from July to early October.

We always consider that woodcock return to their wintering grounds in October or November however EX42351 took it's time to come back to Wales only arriving back in Llanilar on January 20th. This fits an emerging picture that most of the woodcock I see early in the winter are juveniles and that more adults appear in December and January. Counts conducted by the bird observatories on our east coast often show a significant arrival of woodcock if the weather gets cold on the continent.

It would make sense for an adult woodcock not to migrate further west than it needs to. Apart from avoiding the risky business of flying such a long way, there must be significant advantages of being back on the breeding grounds in Russia in a fitter state than birds that have had to travel further to get back

Could it be that many adults use their experience to decide when to migrate further west, whereas juveniles only have their innate instinct and so head west when the autumn triggers for migration such as temperature and daylight length occur?

Today at a private garden near Newtown I managed to catch 5 out of about 150 Bramblings present. I had hoped it would be more but the birds were feeding on natural food at numerous spots over a wide area. This year there is a very good Beech mast crop, something that spells good times for lots of our seed eating birds (this was evidenced by the hordes of Blue Tits and Coal Tits I also caught!). I've now started baiting a good netting site so hopefully the next trip will be slightly more successful in terms of the number of Bramblings ringed - I hope so,  sunflower hearts aren't cheap!.  Tomorrow morning I'm off to try and catch a few at a site further west were there is currently a flock of well over 1,200!! 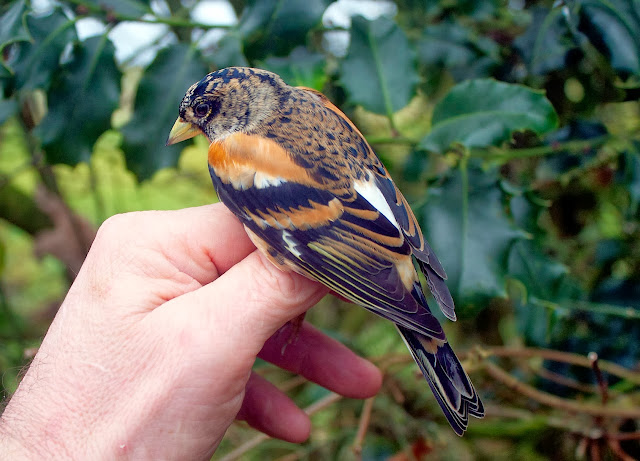 It has been a good while since I managed to ring any number of these stunning finches but I've got a feeling this winter is going to be exceptional. Here is an adult male, note the lack of any contrast in the greater coverts, the black primary coverts and the rounded tail feathers.
Posted by Tony Cross at 19:15 2 comments: