Last night myself and Silvia headed to a place near home where we had seen a couple of thousand Redwings coming into roost a few weeks back. Unfortunately the numbers had dropped to only a couple of hundred, but with the lure playing we managed to attract a few birds in to the net. We managed to catch 9 in total, and saw several others 'bounce' out. It wasn't the massive catch we were hoping for, but it was nice to catch some. We did try to catch them in the morning as they left the roost, but unfortunately the wind had picked up over night and catching was very difficult! Only 2 more Redwings were added to the catch, but it was nice to get to see them in daylight! 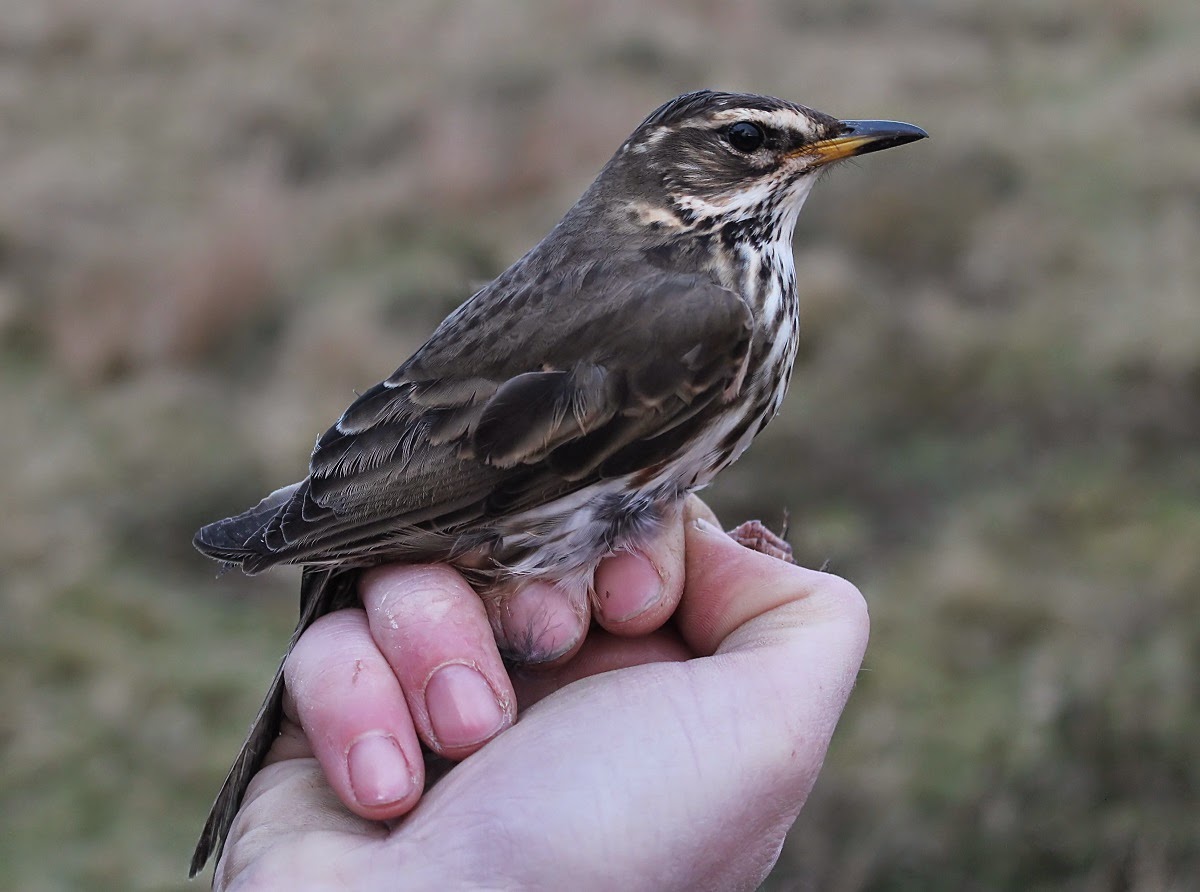 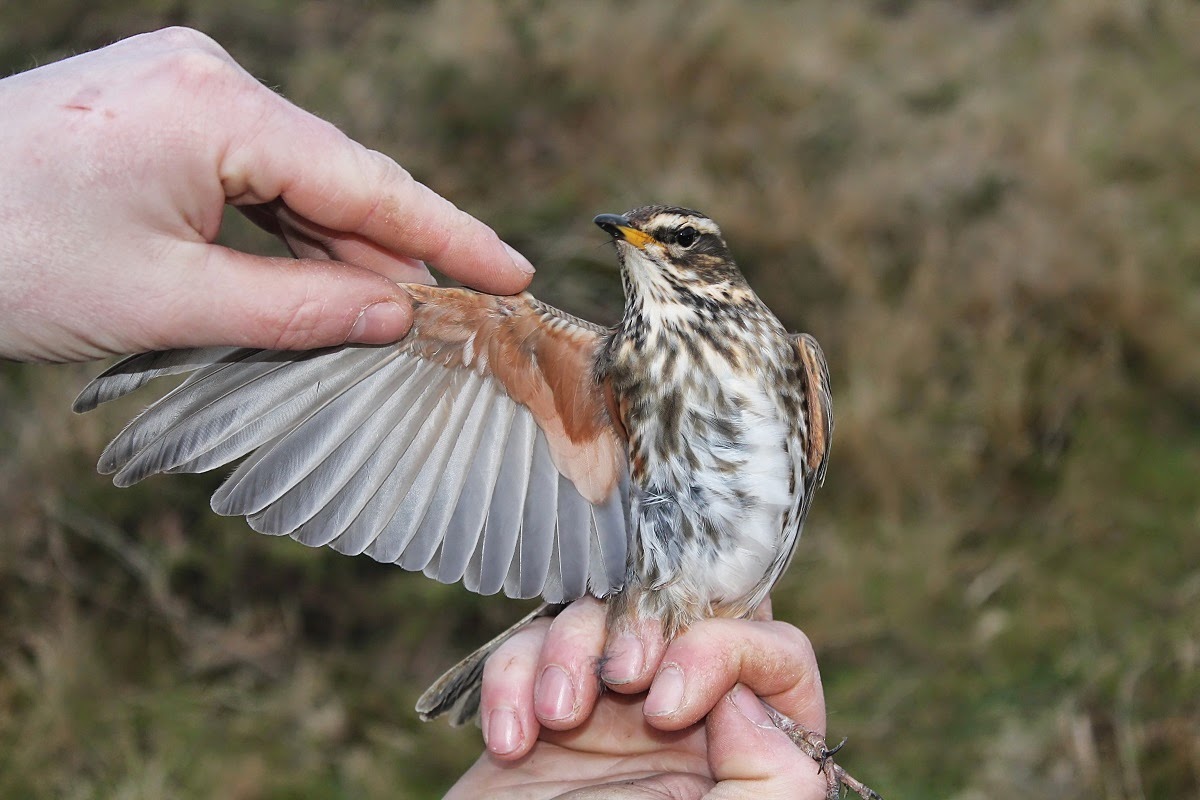 While the light was fading yesterday evening and we were thinking of packing up, a few Tawny Owls started to call very near to where we had set the nets up! A quick change of call on the iPod and we soon had a male and female Tawny Owl in the net!! This definitely made the trip worth while!! 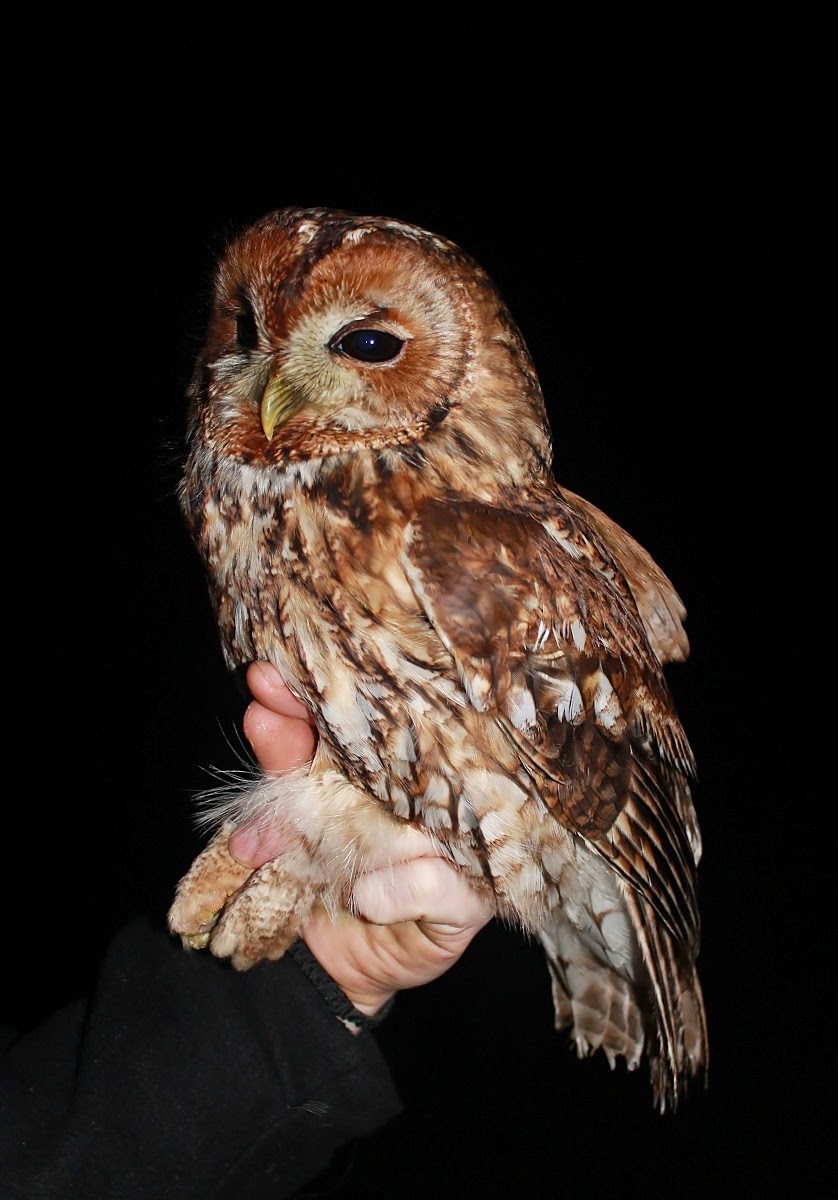 Day-time ringing opportunities at this time of the year in Mid-Wales are a bit limited but at the beginning of December I started feeding the garden again after the summer break. Almost immediately this attracted the attention of a sizeable flock (or 'charm') of Goldfinches. 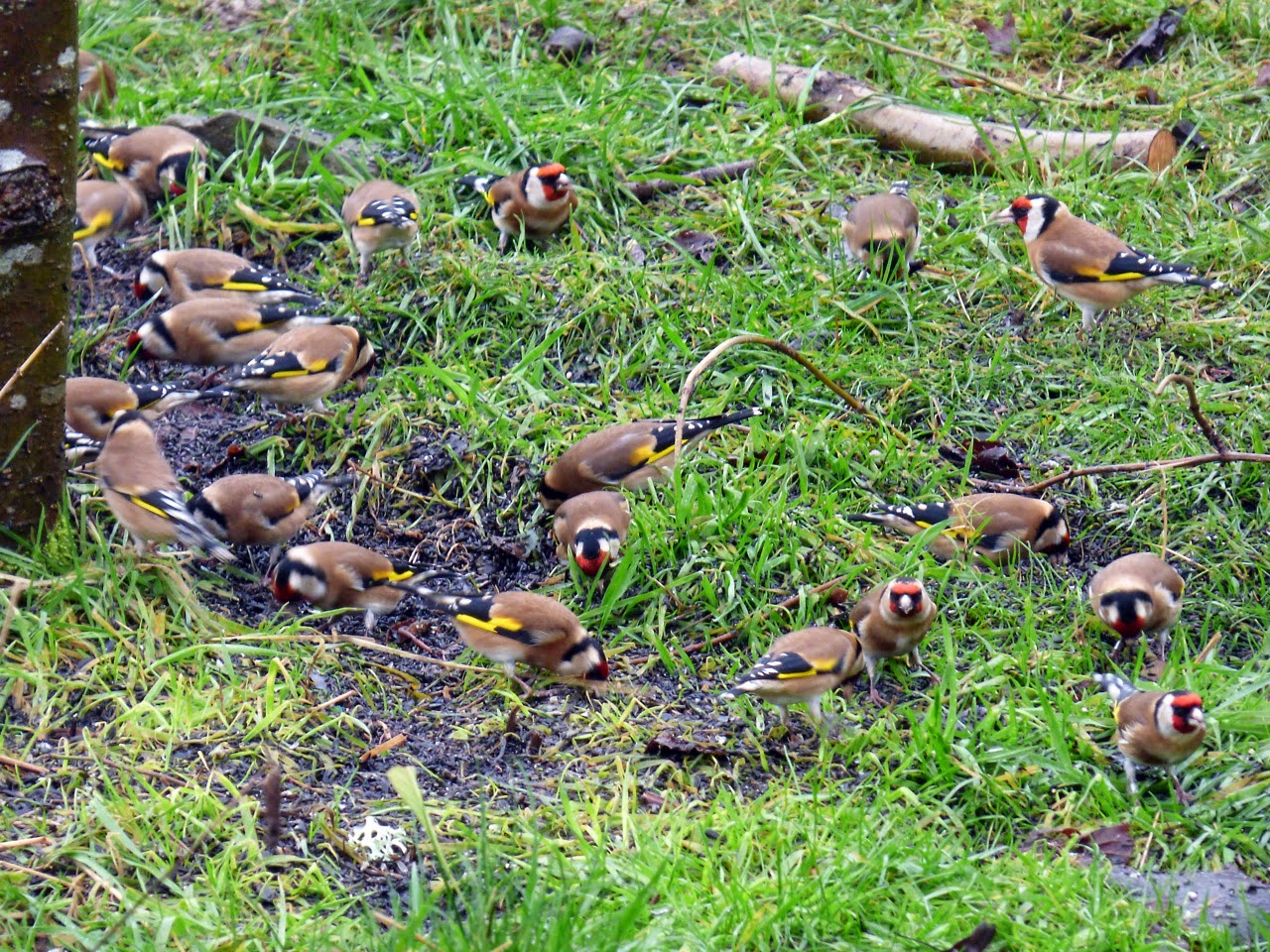 Not the best of photos but it does show just how busy it can be under the feeders. Not sure why they seem to prefer to throw it all out on the floor rather than eat at the feeders but the dog seems to enjoy helping himself to most of what they spill!!


At times there can be nearly 50 Goldfinches on, under or around the 6 nijer seed feeders and keeping them all topped up is costing me a small fortune. Well worth it though as this month alone I have caught nearly 100 different Goldfinches in the garden including 86 new birds and a control. 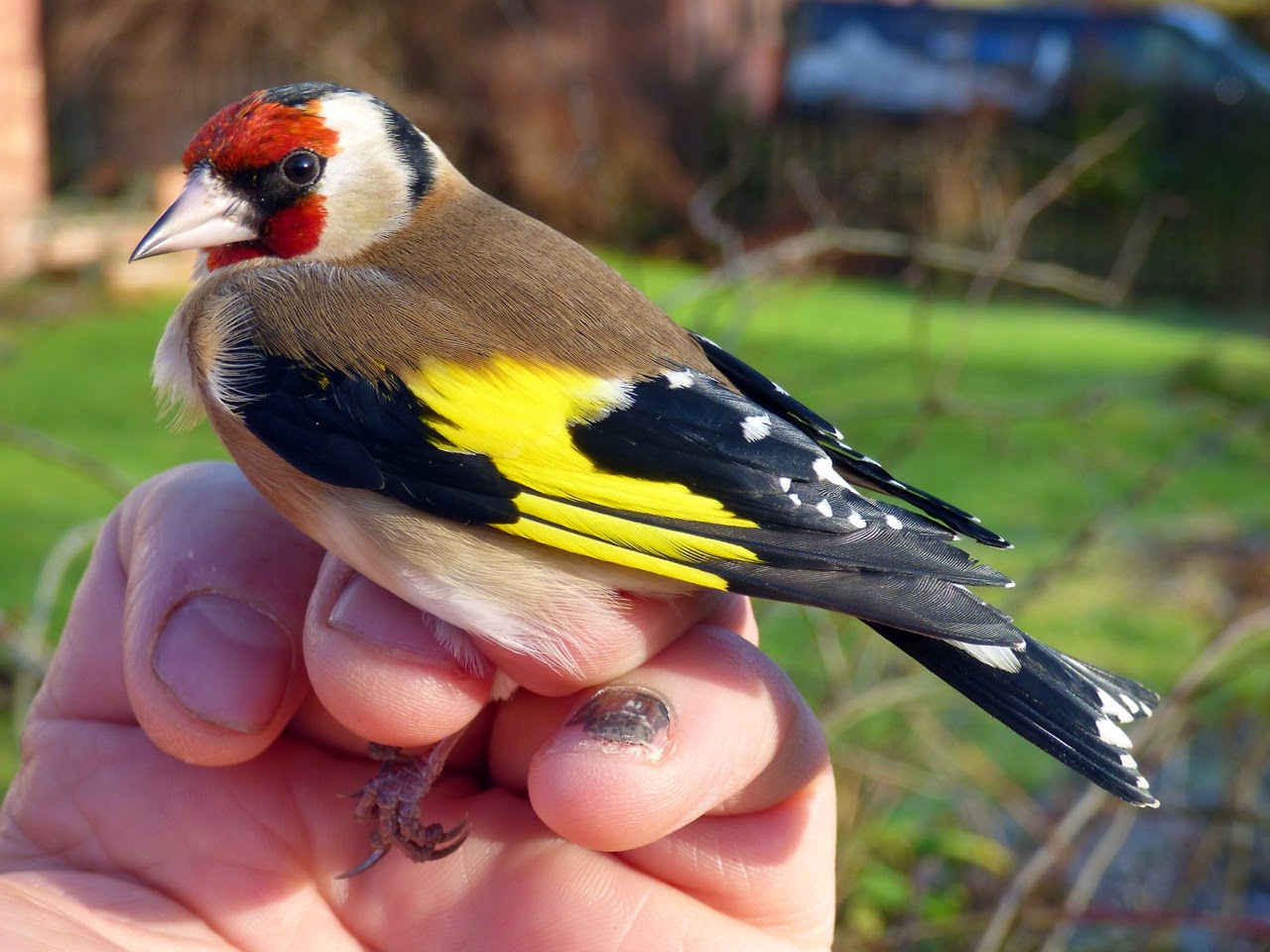 This bird caused a bit of confusion. It is obviously an adult based on the even colour of the primaries and tertials and the shape of the tail feathers. With a wing of 82 mm, red well behind the eye and predominantly black lesser coverts I sexed it as a male but the photo clearly shows it has very white nasal bristles, a feature supposedly found on females? 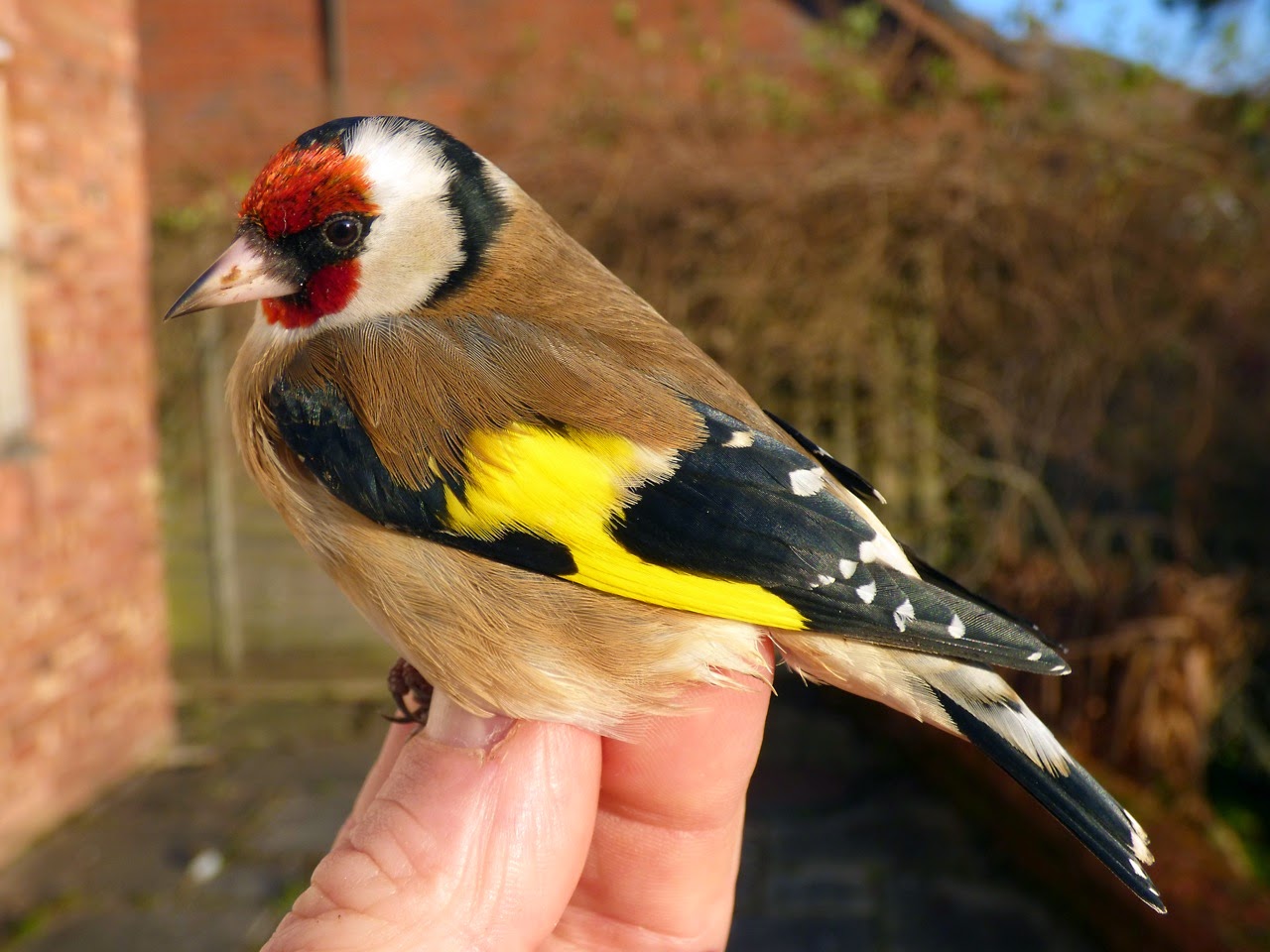 A more typical male showing black nasal bristles. Whatever colour the bristles they are a stunning little bird and it is great to see them here in such good numbers.

It won't be that long now until they are joined by the returning Siskins and Redpolls and then the wallet really will take a hammering!
Posted by Tony Cross at 02:54 No comments:

Following Tony's recent post on Woodcock this winter, I have more information on the 2014 breeding season. I have been in touch with Francois Gossmann who is the French Woodcock expert and his view is that although juvenile numbers are down this winter this does not represent a significant breeding failure and is part of the yearly fluctuation that happens due to the variation in weather conditions in Russia over the breeding season. This summer conditions in much of the area in Russia where Woodcock breed was dry, this impacted on the avialability of worms that are so vital for feeding broods.
I have also been in touch with Vadim Vitovsky a Russian biologist who studies Woodcock in the St Petersburg area. Each autumn they catch and ring Woodcock and have found that body mass this year was about 10% lower than normal reflecting poor feeding conditions, however Vadim also said that this was not an unusual occurrence.

Looking at the data on adult/ juvenile ratios from a selection of our ringers working in areas where there are few breeding Woodcock we can get a reasonable picture of what is happening with migrant woodcock for the past 4 years.

Now that the Woodcock Network has a way of monitoring yearly breeding success we can keep shooter informed and urge them to use restraint on years when there has been lower breeding success. I have written a piece on this which will be published in 'Shooting Times' this week.

This is all possible due to the dedication of our Woodcock ringers who venture out on cold wet and windy winter nights to ring and gather this valuable information. People often question the need for ringing, but ringing Woodcock demonstrates the value of gathering biometric data across the country which can be used to the benefit of the species.

Since the Woodcock Network started ringing in 2008 we have learned that Woodcock are much more abundant than previously thought with our ringers seeing high numbers on sites throughout the country. What has also emerged is that migrant Woodcock are highly loyal to their wintering haunts. Since starting to ring Woodcock on my site in West Wales I have seen my re-trap level of birds ringed over previous winters grow each year.

We are keen to get more ringers working on Woodcock so that we can improve our understanding of this secretive species. If you need advice on catching techniques please give me a call on 01974 272654. 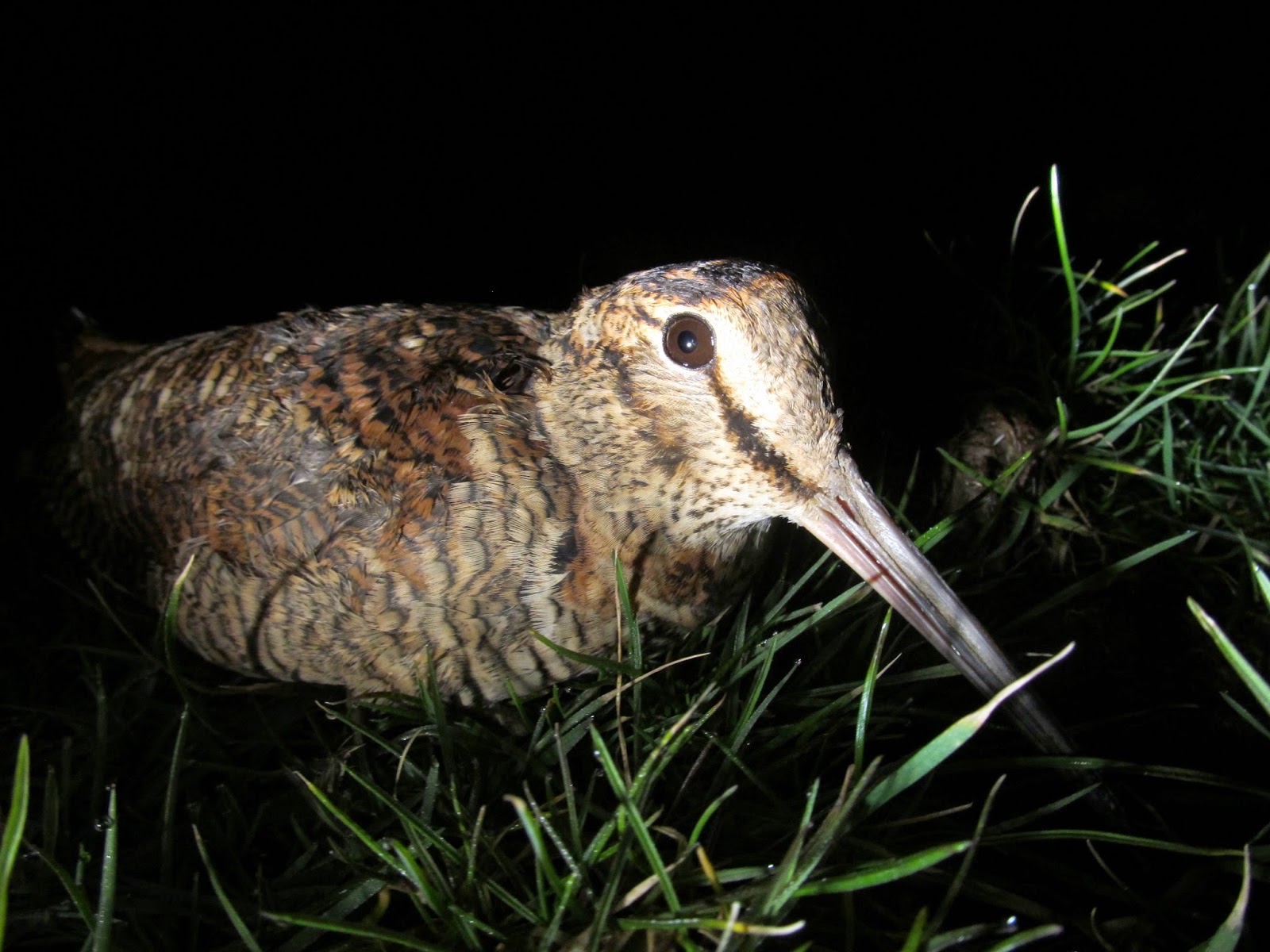 Posted by owen williams at 08:22 No comments:

What a load of old Scolopax!

After a slow start it looks as if the Woodcock have finally arrived in Wales en masse. I caught my first one of the winter on the 28th October, a pretty usual date for seeing the first few returning birds, but although there have been reasonable numbers present since there hasn't been anything spectacular. The last two nights though have been very different! In the early hours of Sunday morning, after catching a few Snipe and Jack Snipe at Ynyslas with Matt Potter, I ventured out to one of our regular sites just inland of Aberystwyth and had a catch of 16 new Woodcock. Then last night I made the first visit of the winter to a regular site in Carmarthenshire and caught an amazing 27 Woodcock (25 new birds, 1 retrap from Feb 2011 and another from Jan 2012). That's 41 new Woodcock ringed in less than 24 hours!

Francios Gossman from the French equivalent of the Game Conservancy had recently contacted Owen to request information of the ratio of adult to young birds we were getting as there is some early suggestion that it may have been a poor breeding season for Woodcock in Russia this year as it has been so dry. The 43 birds I've just caught comprised 18 adults and 25 juveniles or 42% adults which is actually higher than the mean of around 30% observed over the past few years so perhaps there is something in it. Hopefully Owen will be able to post a more comprehensive assessment later when he has gathered comparable counts from other Woodcock ringers. 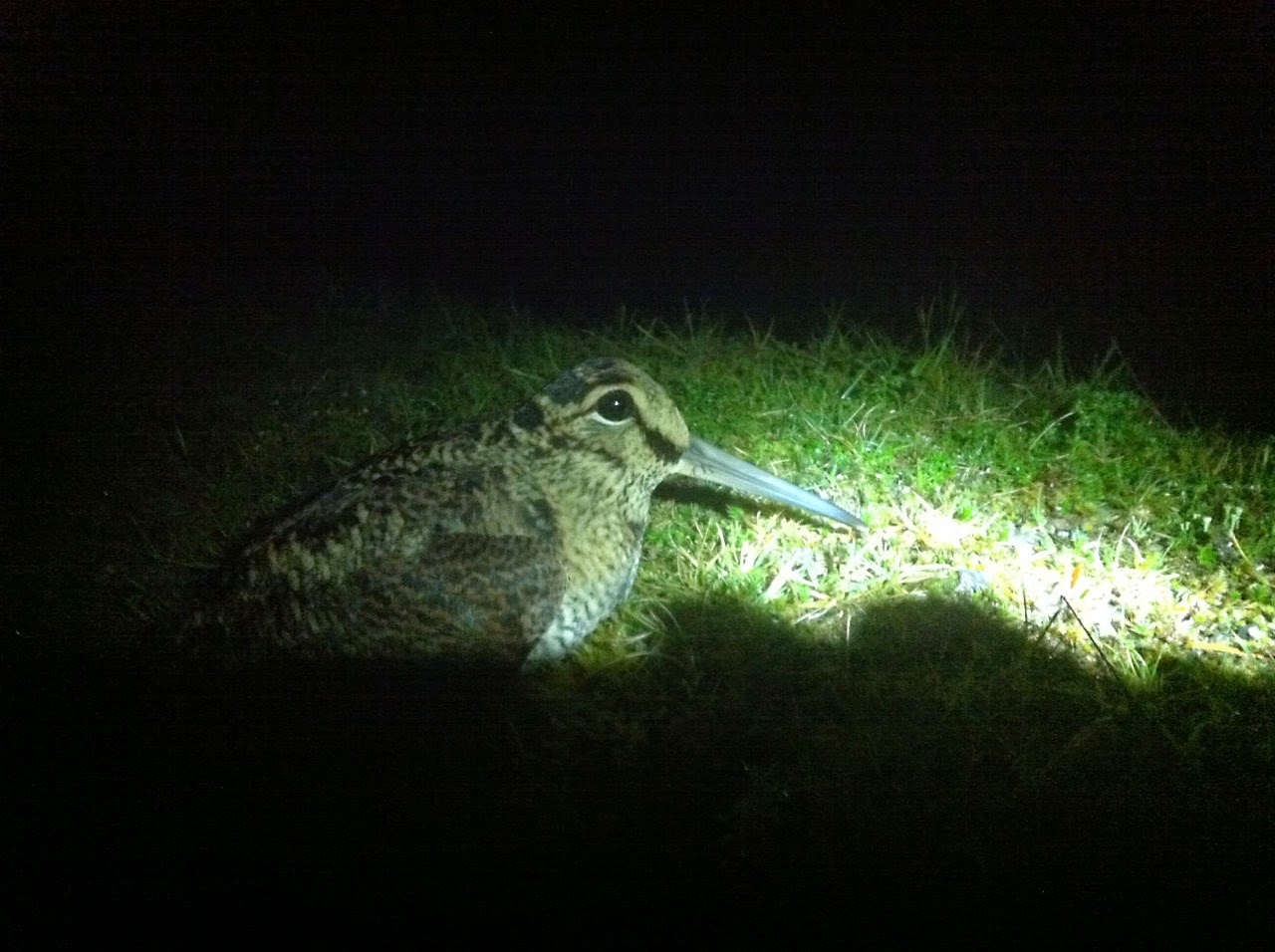 In the spotlight - if, through adult:juvenile ratios at trapping, Woodcock can be shown to have had a poor breeding season then the shooting community can be asked to exercise restraint so that numbers are allowed to recover.

With the moon high in the sky and bright until 4 am the only chance to get a bit of dazzling in at the moment is to get up early - very early! Yesterday I met Sarah in Aberystwyth at 2:45 having set off an hour earlier. The sky was cloudless and the moon still very bright so we killed a bit of time catching a few Dippers at one of the local roost bridges. Four birds were present and we managed to catch 3 of them (2 new and 1 2013 retrap). Afterwards we headed down to a regular dazzling site on the coast. Despite the perfectly still conditions and heavy frost we eventually managed to catch 2 Golden Plover, 2 Lapwing, 2 Woodcock and a Skylark but it was hard going as the birds were clearly using other locations for feeding now that the small puddles had frozen. In particular we didn't see a single Jack Snipe despite the fact that Brendan and I caught 3 (and flushed almost double figures) in the same fields just 24 hours earlier. 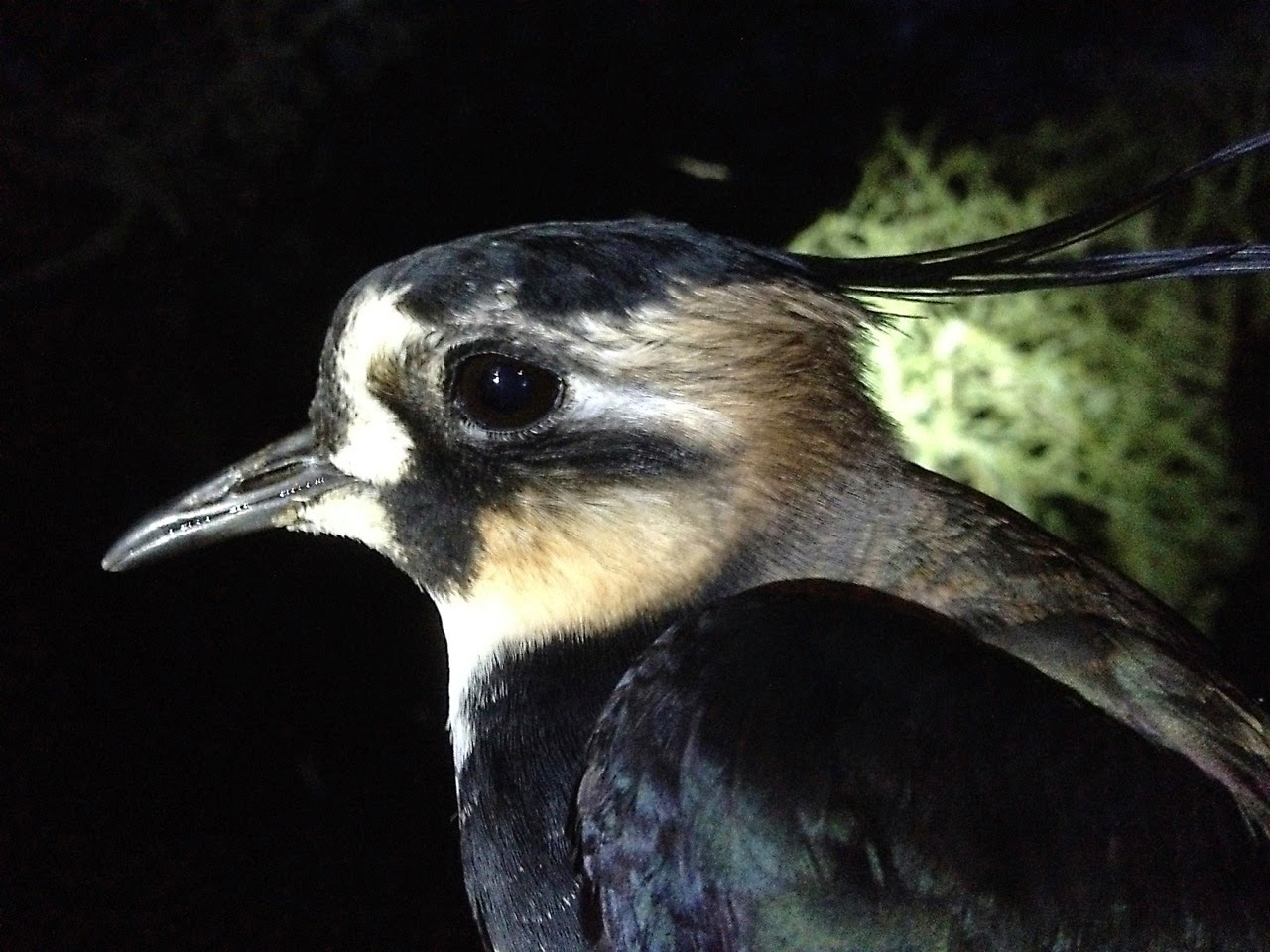 At 8am Sarah headed off to work and I met up with Brendan and we went looking for daytime ringing opportunities on the coast. Mid Wales can be pretty lifeless for small birds in the winter but we eventually found a turnip field absolutely heaving with Meadow and, bizarrely, Rock Pipits. There must have been well over 50 of each species present along with a similar number of Skylarks. Tracking down the farmer took a while but he was more than happy for us to try catching a few so we set two nets in a V shape and left a mixed pipit tape running. The pipits could clearly see the net (the Rock Pipits more so than the Meadow Pipits unfortunately) but we did eventually catch 22 Meadow Pipits and 3 Rock Pipits. As the frost melted so the birds moved out of the turnip field and headed out to the pasture fields nearby. A quick look at the thrush roost in the late afternoon showed that the large number of birds present just a few weeks ago had already moved off or found somewhere better.

Despite the relatively small number of birds caught, during the course of the day we ringed our 500th Dipper, 400th Meadow Pipit, 300th Woodcock and 200th Golden Plover of the year. Scientifically I suppose these figures are barely separable from 499, 399, 299 and 199 respectively but hey, that's just one of the small joys of being human!
Posted by Tony Cross at 12:38 2 comments: