Just how many swallows does it take?

June is always our busiest month for ringing nestlings, and this year has been no exception as can be judged from the lack of blogging!! Actually for the last month I have not only been trying to be both diurnal and nocturnal but amphibious as well! Despite the abundant presence of Swallows locally summer has yet to arrive and waterproofs and thermals are still the order of the day!!


The month started well with helping to catch Cuckoos for the BTO satellite tracking project and finishing off colour-ringing the last few Chough broods in North Wales. Pied Flycatcher nestlings then became priority for a brief while before wing-tagging Red Kite chicks and radio-tagging Nightjars took over. Throw in a few Little Egrets, some Barn Owl and Kestrel broods ringed and some largely abortive searches for successful Merlin and Peregrine nests and that pretty much sums up June 2012 - a month to forget on the whole!! Here are some highlights 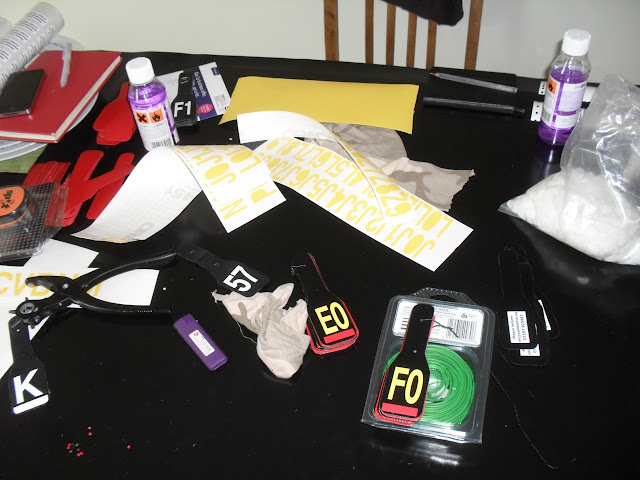 And you thought wing-tags came ready made!! All those episodes of Blue Peter and sticky-back plastic weren't a waste of time after all!! 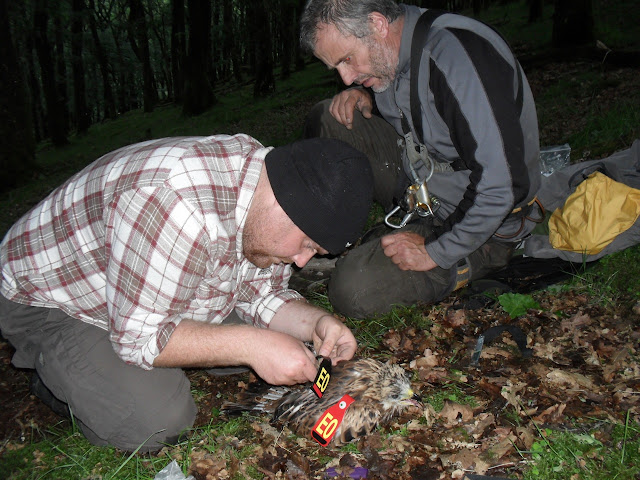 Adam McClure, the RSPB's Northern Ireland Red Kite Project Officer joined us for a week in early June for a bit of training in how to fit wing-tags 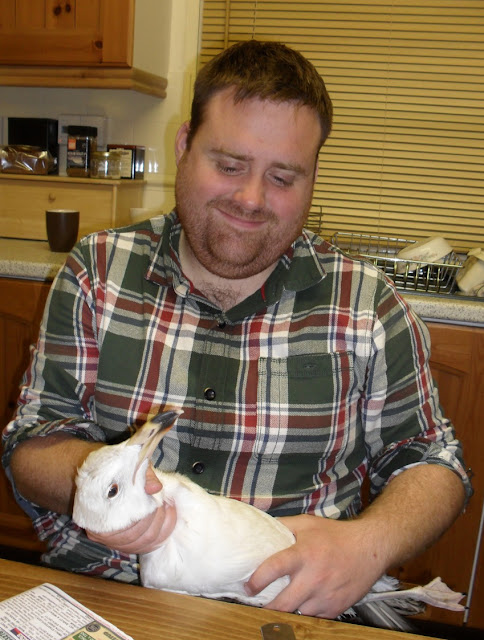 with a bit of Great Black-backed Gull strangling thrown in for good measure - it''s the safest way to hold them! 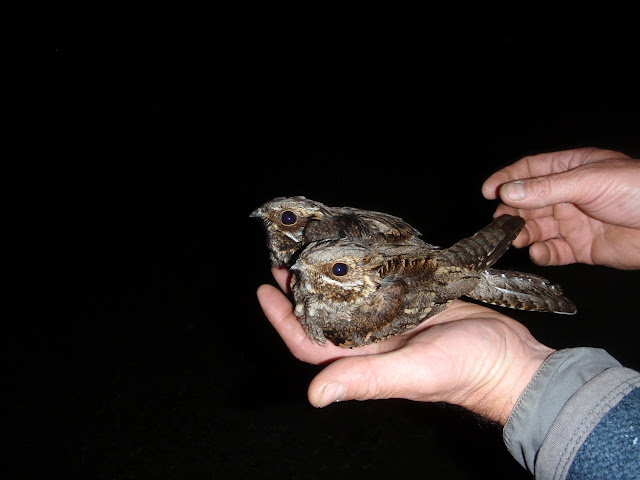 That's worth four in the bush!! 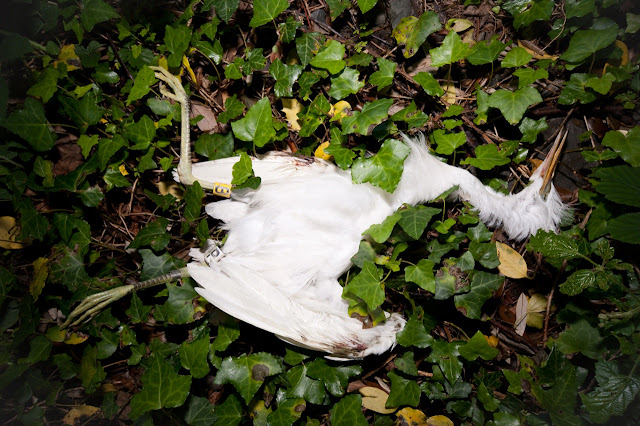 Although 55 more Little Egrets were colour-ringed during the month not all of them fledged successfully, including this poor bird which got itself stuck halfway down one of the big spruce trees the nests are in. 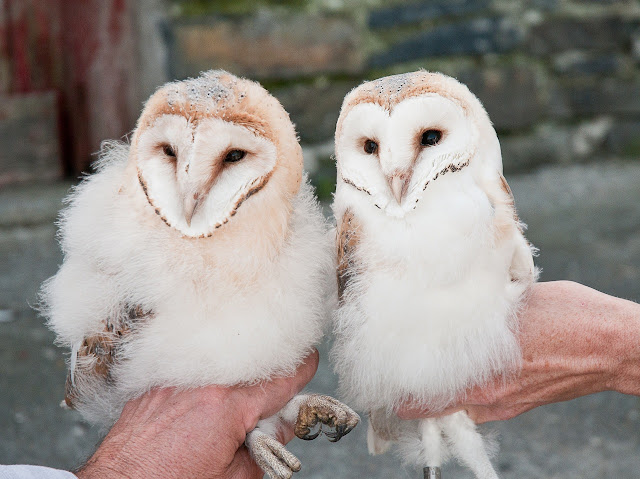 2 of this year's Barn Owl crop. A female on the left (note the buff breast and darker face) and a male on the right. The number of pairs has increased again following the mild winter and some pairs were very early but brood sizes are generally rather poor with lots of twos. 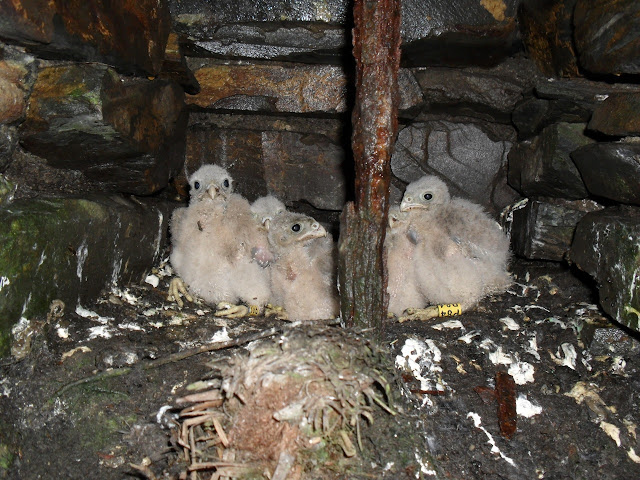 Kestrels on the other hand seem to be doing quite well, at least those in nest boxes and buildings are! The four broods colour-ringed so far were of 6, 5, 5 and 4. 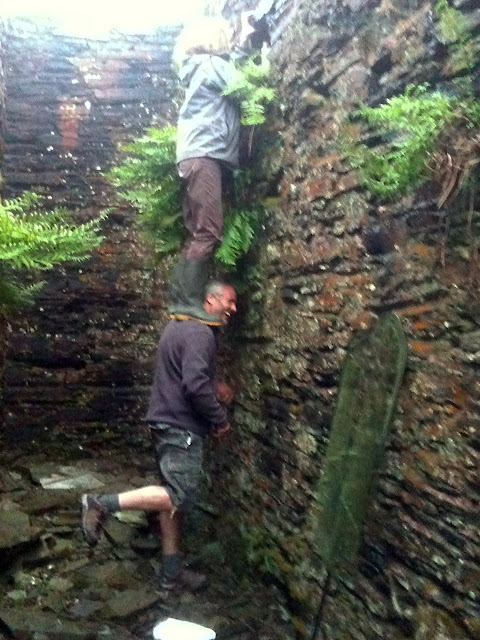 The view from outside the above kestrel nest - who needs ladders? Safe, perfectly safe!! 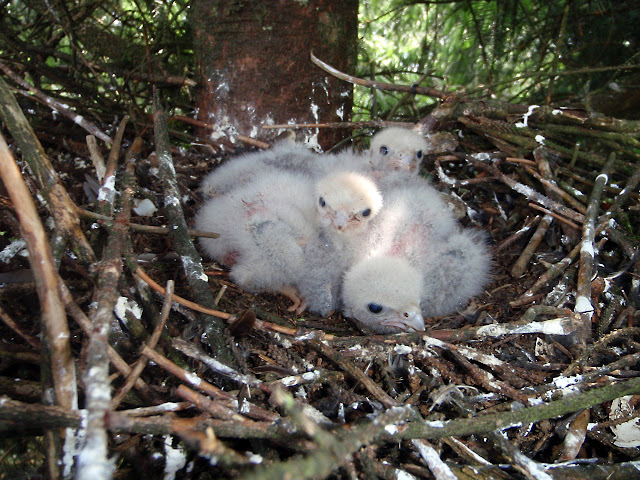 and some hardy Merlins to return to in early July.
Posted by Tony Cross at 22:36 No comments:

On Tuesday Adrienne Stratford, Kelvin Jones, Rob Sandham,  Hamza and I headed into a heronry near Bangor to colour-ring Little Egrets. We have been colour-ringing at the site for the past four years and with the 37 ringed on the day have now marked nearly 200 chicks in total. Sightings have been received from far and wide including Scotland, Northern Ireland, Republic of Ireland and even one to Tenerife in the Canary Islands! 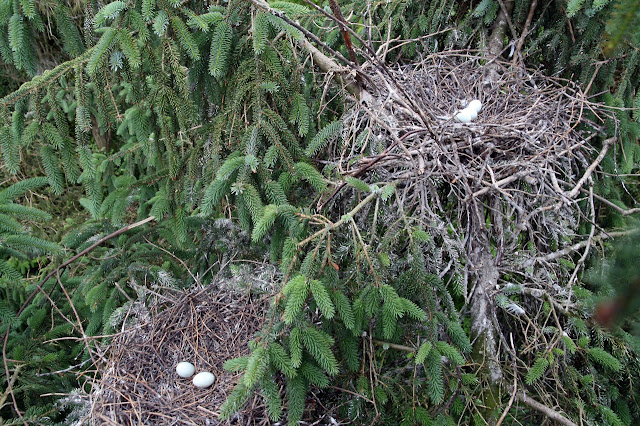 Last year the productivity was pretty poor with many nests predated by a pair of Ravens. The colony has split this year with the majority of nests in a new location and the number of young present seemed good, although not as good as in 2010 when the trees were alive with little Little Egrets. Several nests still contained eggs though so another visit is on the cards for the end of June. 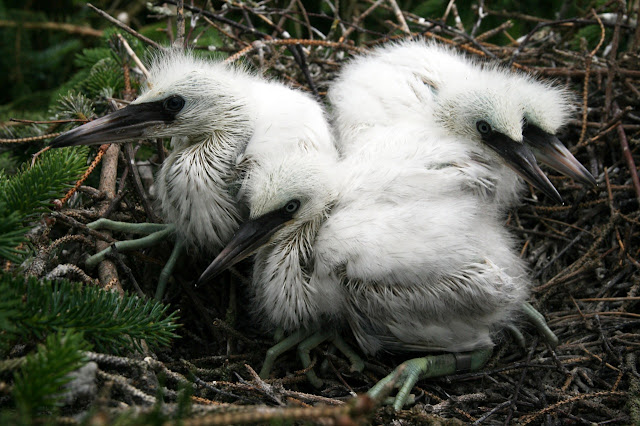 Spot on the optimum age for ringing. Much bigger and its like trying to ring monkeys! 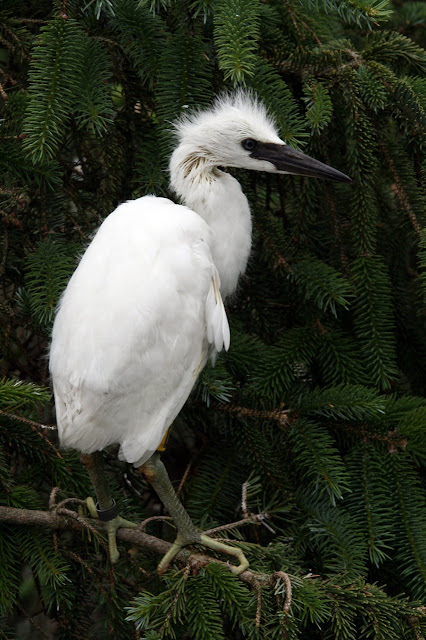 The aforementioned monkey! Playing chase with an incredibly agile Egret in the top of a 50ft Christmas tree has to be done extremely carefully and loud outbursts of frustration are not unusual! 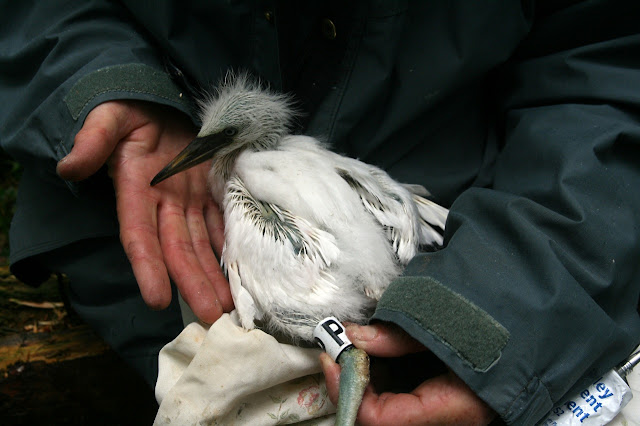 I'll have a P please Rob! 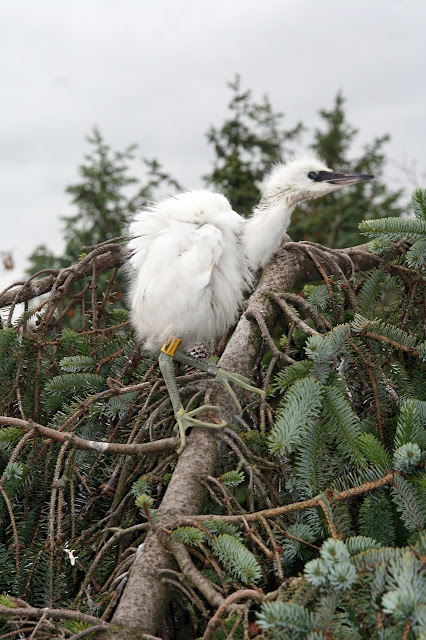 Over the past month followers of the Game and Wildlife Conservation Trust's woodcockwatch website www.woodcockwatch.com have been amazed at the impressive distance travelled by one of the 12 woodcock satellite tagged in the UK last winter. 'Monkey' tagged in Cornwall on March 21st finally arrived at his breeding destination north of Krasnoyarsk on May 15th.

This location in Russia is at the same latitude as western Mongolia and 6200 km from his wintering ground in Cornwall.
This might have been thought of as an aboration as all the other woodcock have only travelled a couple of thousand kilometers. However last week The Woodcock Network received news from Tony Cross of a very exciting woodcock ring recovery which suggests that some of our woodcock do travel similar distances. 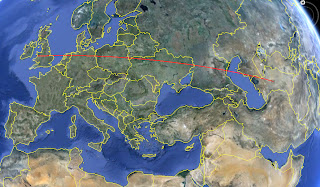 The woodcock ringed by Terence Lambert near Clywedog, Powys on March 9th 2011 was shot in Pervomayskiy Turkmenistan on April 26th 2012. This represents a journey of 4989 km, what is astonishing is that this is an area of desert to the north east of Tehran and east of the Caspian Sea, quite what this woodcock was doing there is anyones guess.

Posted by owen williams at 13:54 No comments:

In April I open my bill!

In May I get fitted with a satellite tag!!

I spent a couple of very enjoyable days near Tregaron this past week with BTO researchers Chris Hewson and Phil Atkinson and their Welsh Development Officer, Kelvin Jones, catching Cuckoos for their continuing research on the migration of this amazing bird. More can be read on the BTO Cymru website and hopefully the birds will be going live on the BTO website soon so you can follow their movements and migrations almost as they happen. 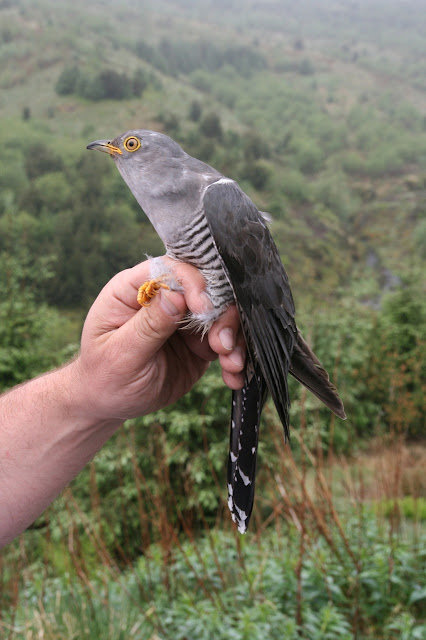 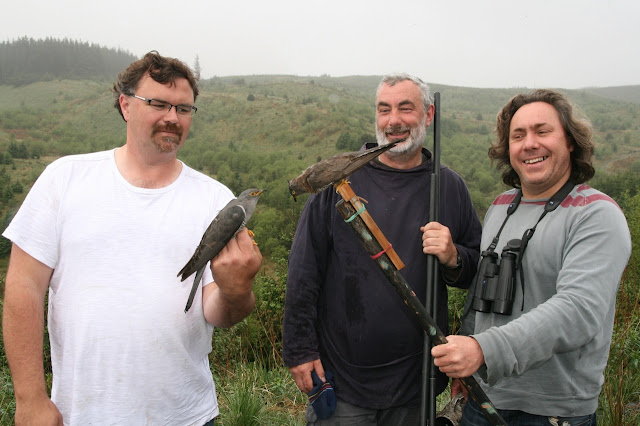 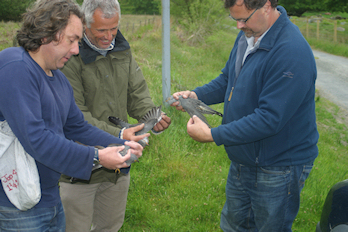 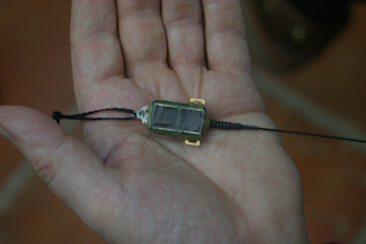 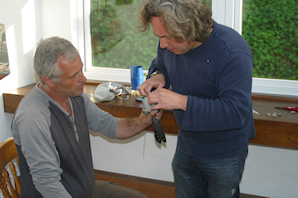 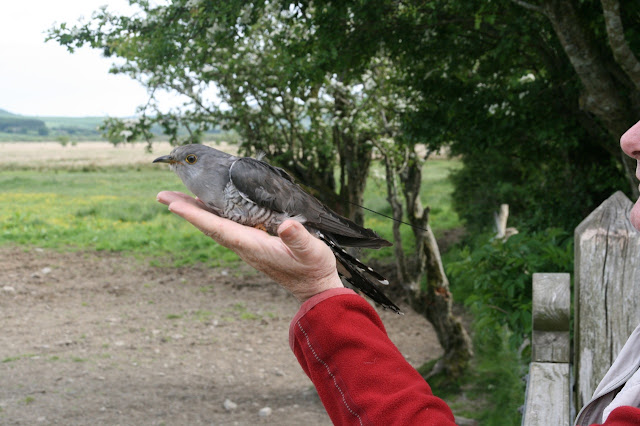 This morning, myself and Tony met at 06:00 in an attempt to kick start our raptor ringing of 2012.  Despite the Peregrine chick below being the only raptor ringed today, it was't all bad news. 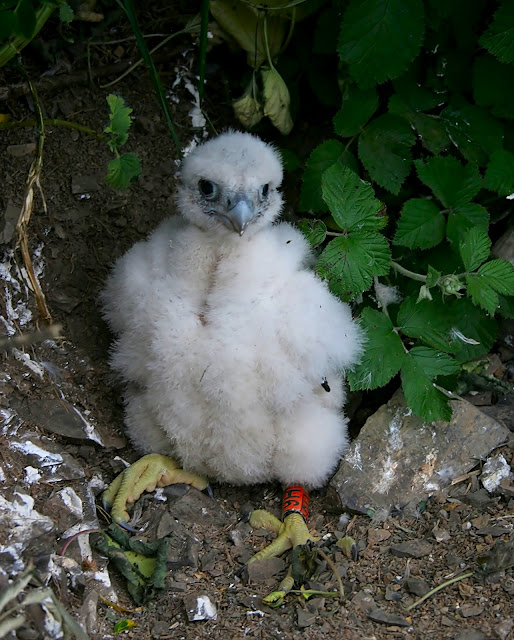 Firstly because this was a 'new' Peregrine site for us, and secondly because we managed to find 2 active Kestrel nests and a Hobby kicking a Crow out of it's nest!

Other birds ringed today included a brood of 3 Crows, and a brood of Wheatears.  A Chiffchaff nest was also found, but the chicks were too small to ring. 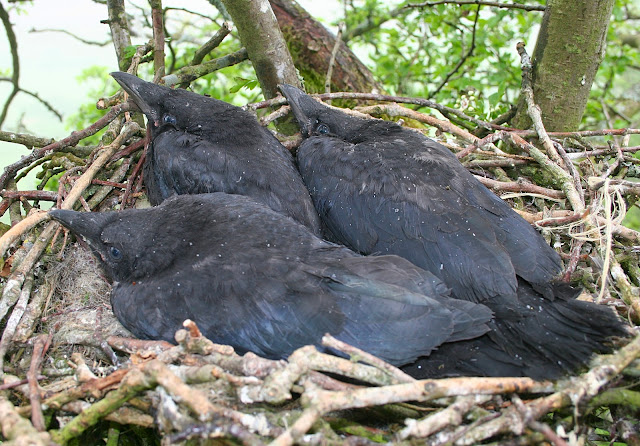