Early this morning myself and Jane headed off to a church in south Wales (which will remain confidential for reasons later apparent). No we hadn't suddenly seen the light just a very good ringing opportunity! Driving past the other morning I had noticed about 50 swifts circling the church and flying up under the eaves. A quick note was made of the vicar's contact details and a couple of attempted phone calls later permissions were in place. An early visit this morning saw the church sandwiched between two 60 ft super fine nets causing much intrigue to those visiting their departed loved ones. Catching was very slow but eventually a few adults and one juvenile swift dropped into the nets. 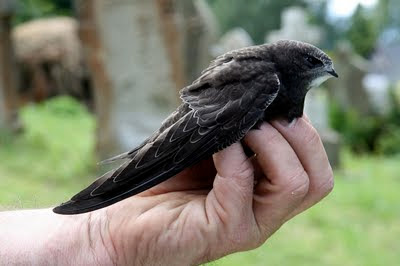 Thinking that it might also be possible to access some of the nests under the eaves for ringing pulli, which it was, I managed to blag the loan of a long ladder off the caretaker. The sight that greeted me on getting to the top was horrifying! Some years previous, and under the auspices of a different vicar, a handy-man had been tasked with trying to prevent the swifts gaining access to the church. His solution was to cram the eaves full of wire-netting! Unfortunately the mesh was big enough to allow the swifts to squeeze through (but only just) and many had become trapped on trying to get out again. In total over 20 corpses were caught up in the wire. A few sharp words were exchanged with the caretaker and within 20 minutes I'd pulled it all out and left it in a heap on the floor!! Hopefully our continuing interest, and the opportunity to see the swifts close-up will prevent any future attempts to discourage them from nesting. 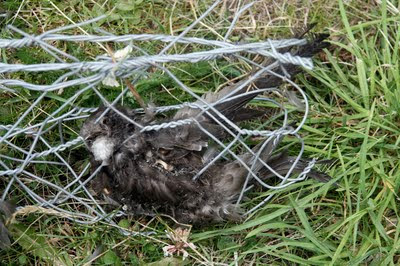 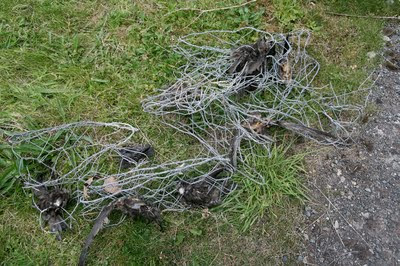 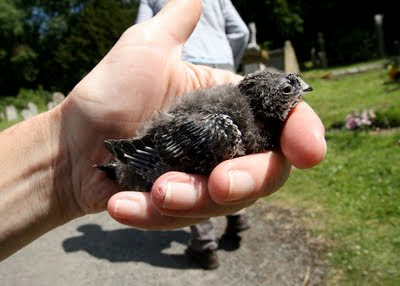