Whilst out catching Dippers tonight I caught something a little unexpected! 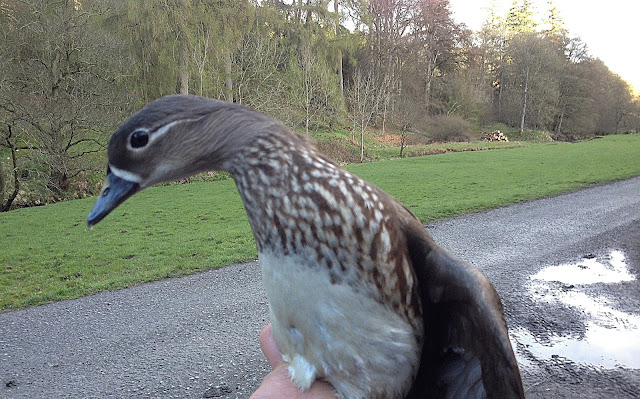 Mandarin Ducks are quite common on many of the rivers we ring Dippers on nowadays but examining this bird carefully the shape of the spectacle around the eye, the generally darker plumage and the shorter legs all indicated that this wasn't a female Mandarin but a female Wood Duck. Its a very tricky identification problem separating the two but the clincher for me was the male that got out of the net as I was running over to it ( I hope he could tell the difference!)

Whilst I know we can ring Mandarins I wasn't sure of the rules regarding Wood Duck so this one went off without a ring. Will have to check now in case I catch another.
Posted by Tony Cross at 22:26 3 comments: 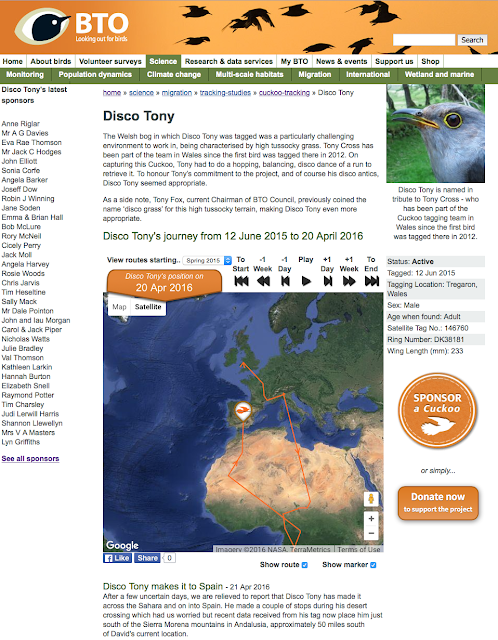 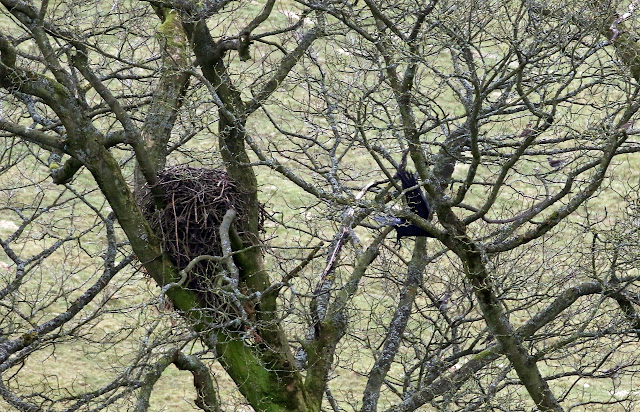 Not a brilliant photo but it served its purpose. When zoomed in this snap of a female Raven leaving her nest on the side of the Long Mynd in Shropshire (taken on 21st March 2016) clearly shows an unringed bird whilst a telescope view shortly after confirmed the male was unringed too. This is hardly unusual but at this same nest-site last year there were two colour-ringed adults, the two sole survivors of over 800 nestlings I'd colour-ringed during the 1990s in a project involving the Shropshire Raven Study Group.

The male had been ringed just a few kilometres away on 16th April 1998 and the female slightly further away near Kempton on 15th April 1999. When last seen alive by Leo Smith on 14th March 2015 he was 17 years and 332 days old and she was 16 years and 333 days old.  The BTO longevity record for a British-ringed Raven is 17 years 11 months and 15 days held by a Raven ringed in Cumbria in 1982 and found dead near Keswick on 23rd April 2000. If the male at the Long Mynd nest had survived another season he might have taken the title. This is undoubtedly the oldest pair of wild Ravens ever recorded in Britain and that is some achievement in a sheep-rearing area with so much ill feeling towards them!!

It is not impossible that one or other of these birds could still be alive, having been widowed and then ousted from its territory by a bonded pair - fingers crossed!

The Shropshire study found over 50 colour-ringed nestlings at their subsequent nest-sites and followed them all through to their replacement by un-ringed birds. With these last two colour-ringed adults now presumed dead it is time to put pen to paper and write it all up! 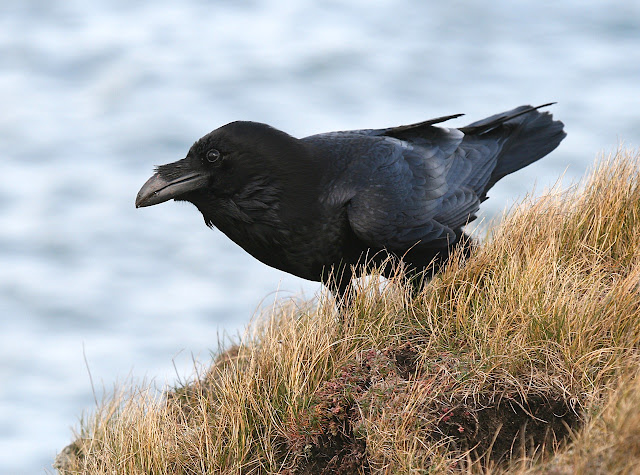 P.S. Just last week, whilst checking some Chough nests, I resighted a female Chough that was coming up to 20 years old and a male approaching 18. It is very pleasing to record such long life histories, but also extremely sad when they come to an end.
Posted by Tony Cross at 22:53 4 comments:

In 1985 I ringed my first ever Red Kite with Mr. Kite himself, Peter Davis. I was a student at Aberystwyth University and a keen C ringer.  The following year I obtained my first ever employment,  a contract with the Nature Conservany Council to monitor breeding Ravens and to be field assistant to Peter on his kite monitoring contract (I reckon he had witnessed my tree-climbing prowess the year before and was keen to keep me local!). For the next 8 years I had the great pleasure of helping Peter ring and tag the vast majority of young Red Kites fledged in Wales. In 1993 Peter decided to retire from kite ringing and I took over, ringing the first Red Kite on my own rings on 14th June 1994. Since that date I have ringed a grand total of 2,704 Red Kites, most of which have been either colour-ringed or wing-tagged too.  As a result, not much relating to the movements of our local kites surprises me anymore.  Last Sunday I was alerted to a definite 'first' though by Pete Stevens of the Southern England Kite Group. He sent me an email with photos attached of a wing-tagged Rode Wouw taken in Den Oever, Noord Holland!! 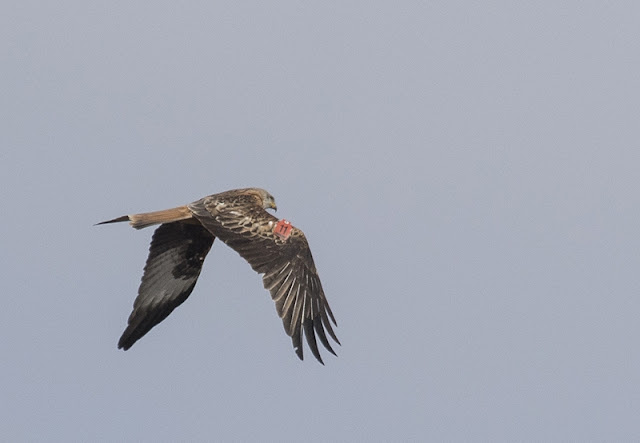 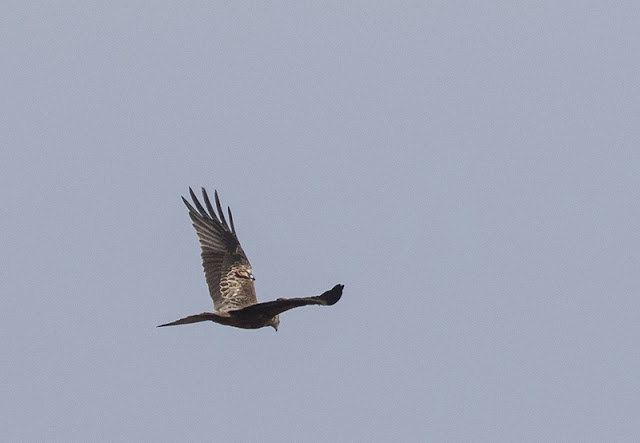 The tags shown are without question those I had fitted to a chick ringed in a nest monitored by Dave Pearce near Church Stretton, Shropshire on 17th June 2014 (about 475 km west of its current location) - photo taken at the time by Leo Smith shown below.  It transpires that the same bird had been seen and photographed several times between the 15th - 19th March about 135kms south of Den Oever in an area just south of Rotterdam 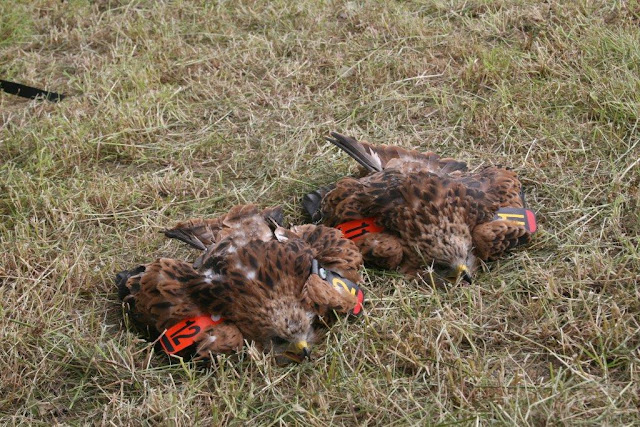 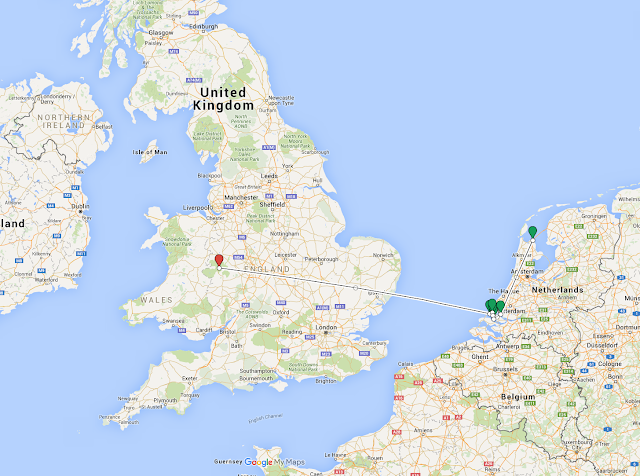 We have previously had movements of Welsh-bred kites to Scotland, Ireland and even one on a gas rig out in the North Sea but have never had a sighting on the Continent before. Welsh Red Kites are essentially sedentary but the English and Scottish re-introduction schemes sourced birds from different populations, some of which (Swedish and German) were migratory.  There is clearly a bit of mixing going on now and this genetic blending has been the subject of a PhD study by Ilze Skujina at IBERS in Aberystwyth that we have been collaborating on. The results from that study had already indicated that Shropshire was an area where the different populations were merging, and this movement seems to back that up.

For now though, this particular Kite seems to have had enough of the UK and is presumably heading back to its ancestral roots!
Posted by Tony Cross at 15:59 2 comments: