The latest locations for the two satellite-tagged Curlews suggest one might be a local breeder, as hoped, but the other is definitely heading north! But how far north will it go? Northern England, Scotland, Finland? Watch this space! 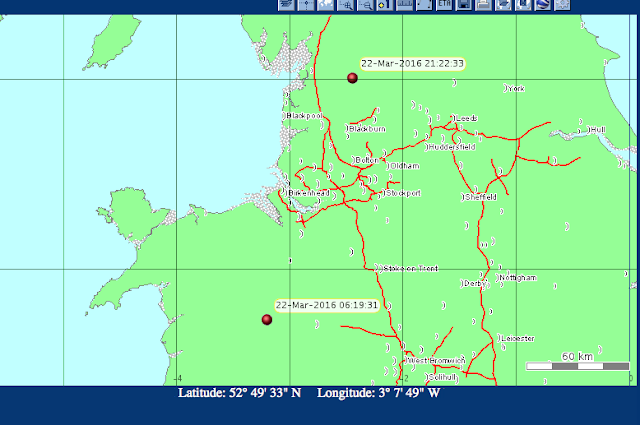 On Monday, Amanda Perkins, David Tompkins (our new field assistant) and I had a quick tour around our Shropshire study area. It was very pleasing to see a load of birds back on their breeding sites and even better to find two more colour-ringed adults on territory. 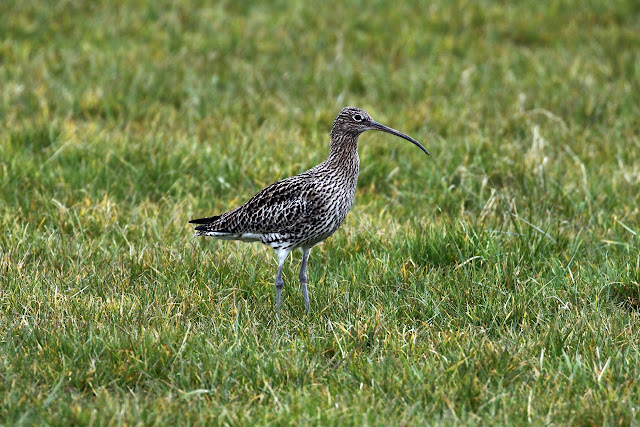 On 8th March Paul Roughley and I paid a return visit to the Montgomeryshire Wildlife Trust's Dolydd Hafren Reserve on the River Severn between Newtown and Welshpool. MWT have kindly agreed to allow us to catch birds at this important staging area and numbers since our previous visit, just 12 days earlier, had almost doubled to around 80 birds.  Eleven more birds were caught and colour-ringed and at least 3 other colour-ringed birds were present and identified. A total of 62 Curlews have now been individually colour-ringed here since March 2015 with two birds identified at local nesting sites in 2015 and two others re-sighted at distant wintering locations in Devon and Cornwall. 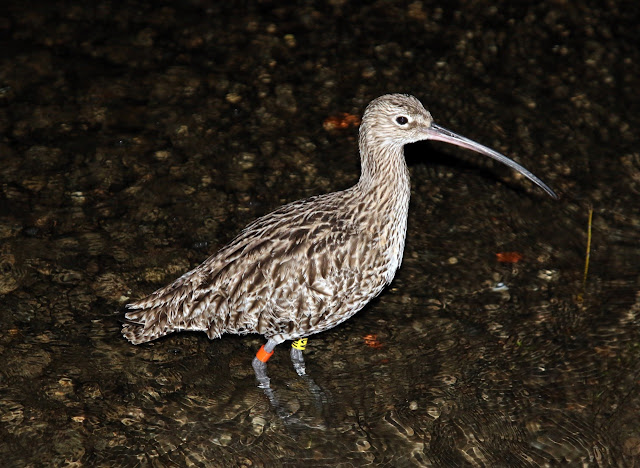 For the past 2 seasons I have, thanks to funding from the Ecology Matters Trust, had two satellite-tags (supplied by Microwave Telemetry) ready to be deployed on local breeding Curlews in order to investigate foraging range and habitat use around nest sites. Because of strict rules and guidance from the BTO on what percentage of a bird's body-weight it can safely carry, these tags' use has been specifically restricted to larger birds weighing over 800 grams (in effect meaning that they had to be fitted to large females). Sod's Law being as it is the only two birds I'd managed to catch at nest-sites were both males. I have been reluctant to fit them to birds caught at winter roosts on the coast as many of the Curlews here are probably continental migrants. Given that the tags won't last for ever, and as much of my time is now spent in Shropshire working on a Curlew project for the Stiperstones and Corndon Hill Country Landscape Partnership Scheme, I decided not to delay any further and to deploy them on the two largest birds caught on that night and just hope that they were both local breeders within our study area! 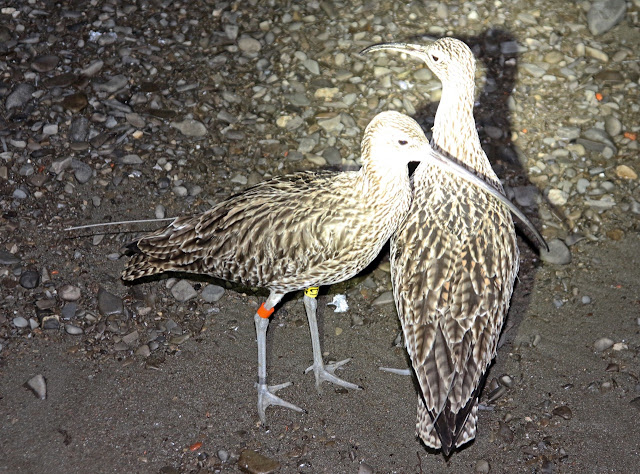 Two of Mother Nature's natural wonders and nearly £7,000 of man-made technological excellence combined! A pair of satellite-tagged female Curlews immediately after their release. Yes, the one on the right is tagged as well!

The first location received, a day or two later, was surprising to say the least and doesn't bode all that favourably! The first female had already moved over 50km due west and was enjoying the facilities at another of MWT's reserves at Cors Dyfi at the head of the Dyfi Estuary! I'm hoping she has just taken temporary umbrage and will soon return to the Severn Valley to nest - but who knows! The other female is presently just north of Welshpool. It will be extremely interesting to follow their progress over the next couple of months and I'm currently trying to work out how to make regular updates on the movements of these two birds freely available to a wider audience - watch this space!

Here is a map of the last transmitted location for both of these larger than average ladies! 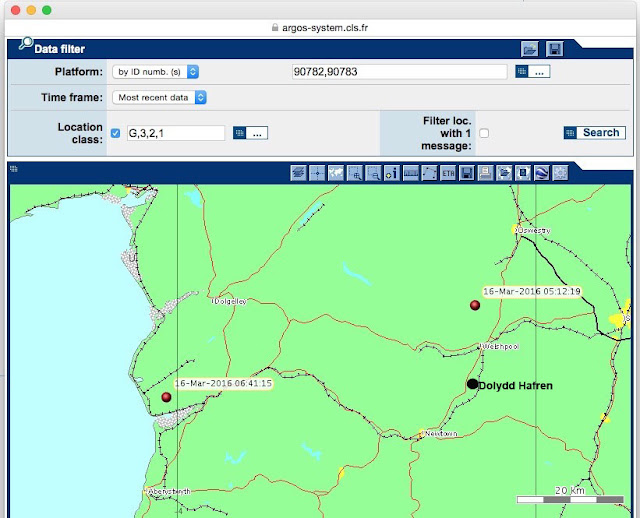 Last night parental duties prevented me from making the utmost of some absolutely perfect lamping conditions but I did manage to sneak out to a site just down the road for an hour or two!

The catch was small, one new and two re-trap Woodcock but I did also catch a ringed Golden Plover. At first glance in the beam it looked VERY interesting as the ring was clearly aluminium and there were no colour-rings. A foreigner?? Luckily it sat tight otherwise I'd have been cursing for weeks! Whilst not as interesting as I'd hoped it did prove to be our oldest recorded Golden Plover to-date. I had ringed it originally with an old D ring back on 14th November 2009 at the exact same location to within 50m! 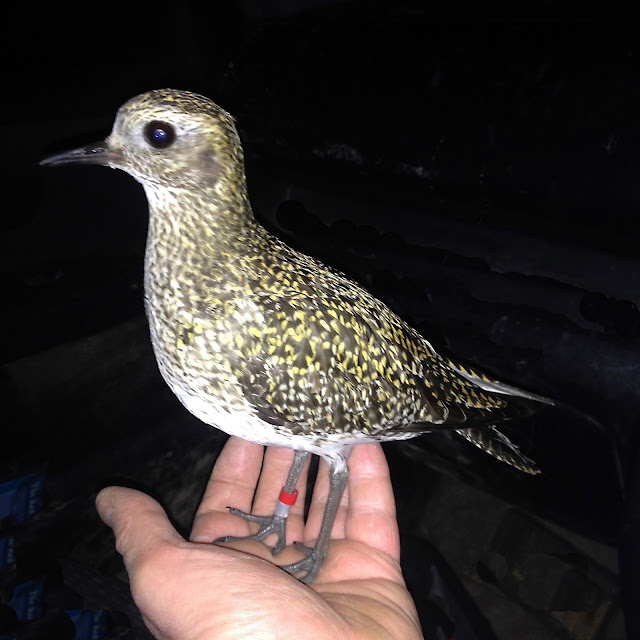 Now sporting colour rings! Hopefully our paths might cross again in another 6 years when it will be the oldest Golden Plover recorded under the BTO ringing scheme!

When originally caught this bird was aged as an adult i.e. at least a year and a half old so although officially only 6 years, 3 months and 18 days have elapsed it is at least 7 years and 9 months old. The current longevity record for a British-ringed Golden Plover stands at 12 years and 29 days so still a way to go yet! Waders as a group are generally long-lived and compared to some other species of comparable size this figure is fairly low. The current record for Oystercatcher stands at 40 years, 1 month and 2 days, for Grey Plover it is 25 years, 1 month and 18 days, for Lapwing 21 years 1 month and 15 days and for Knot 27 years, 3 months and 29 days. Even Dunlin stands at 19 years 3 months and 26 days! Given all the problems they face with habitat destruction, climate change and illegal hunting etc I am constantly in awe that such small creatures can stay out of trouble for so long!

This link to the BTO's longevity pages may be of interest and may provide a few surprises!
http://app.bto.org/ring/countyrec/results2014/longevity.htm 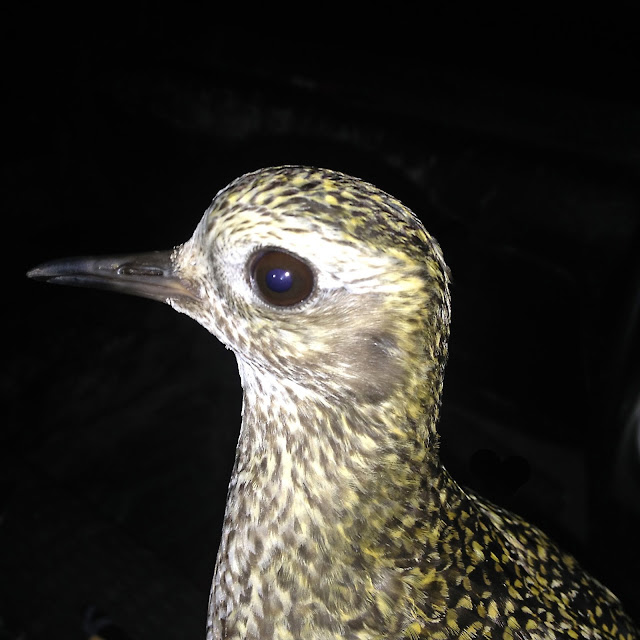 I suppose with such big eyes it isn't that difficult to watch out for yourself!