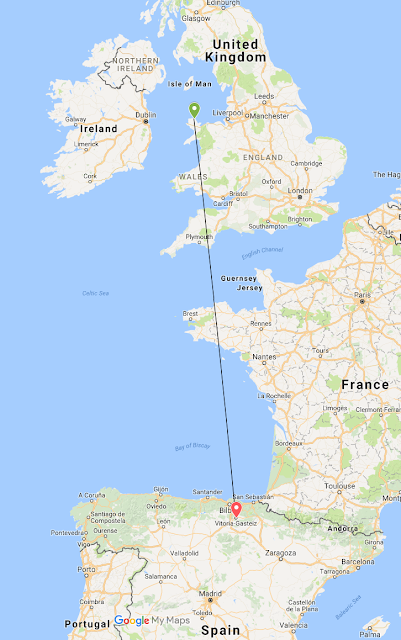 Ever wondered where all the Kestrels are when you are trying to find one for your New Year's Day Bird list? Surprisingly a good number of our British breeding birds move south for winter. We have just been notified of a bird that I ringed as a chick in June 2015 in North Anglesey, that was recaught by ringers at Vitoria-Gasteiz, Aberasturi, Spain on 16th October 2016. Whilst there have been 181 British-ringed Kestrels found in France this is only the 21st to be recovered in Spain. There have even been 4 recovered in Morocco. If a sizeable proportion of our breeding birds are moving south into France and Spain for the winter then the wide scale use of rodenticide poison to control vole plagues in these countries could be one of the reasons we are seeing a decline in our breeding population.

Happily this bird was released alive and well - we will be keeping a keen eye open for it to see if it returns next spring.

For the last few months I've been working away in Yorkshire, which on one hand has been great for bird watching but also very frustrating that I am so far away from any of our ringing sites. So when there has been any opportunity to go back to Wales, I've gone. Last night was one of those opportunities, so when I had finished work I headed home stopping at some of our winter wader ringing sites en route. With the moon not up until 23:45 I knew I had plenty of time to search the fields. The main species I was searching for was Jack Snipe (so Silvia and myself can continue our study on them), although as usual I'm happy to see/catch most species. I was not disappointed, after searching four of our sites I must have seen at least 30 Jack Snipe quite evenly distributed between the sites. Many of the birds we mixed in with Snipe 'flocks' making them hard to get near, but I did manage to find 10 or so on their own of which I caught 6! All 6 birds were new, which I was a bit surprised by, given that over the past 3 winters we've probably ringed 150+ individuals between the 4 sites. Maybe it's a sign that it's going to be a bumper year for them, fingers crossed. 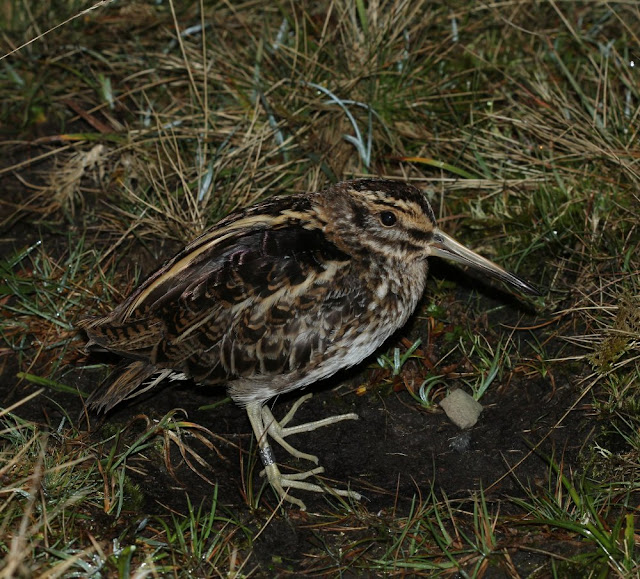 Anyone who has been on a big dazzling catch at Ynyslas with me will know that I can be just a bit disparaging about Dunlin (or Sea Dunnocks as I've been known to call them). The BTO have just emailed me a couple of recoveries that put me right on this matter and confirm that, far from being boring, these common and unassuming little waders do put themselves about a bit!

The Dunlin that we caught on 22nd July 2016 with a San Sebastian ring had been ringed on 13th August 2015 at Parque National Marismas del Odiel, Huelva, Spain (1,707 kms due S). Interestingly we have just had a colour-ringed Sandwich Tern recorded from the same place  that was originally ringed at Ynyslas. 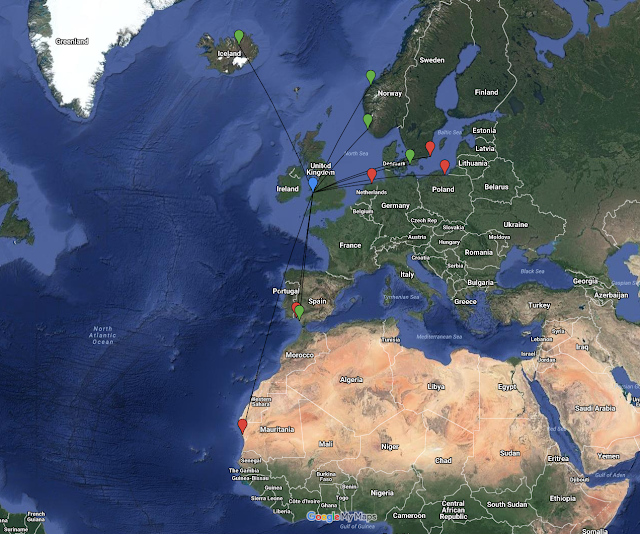 The map is starting to show the great importance of the Dyfi as a migratory stop-off point for birds moving between their northern breeding sites and southerly winter quarters. Our new colour-ringing project will hopefully increase the number of movements we can chart and make far more of the Dunlin we ring 'interesting'.
Posted by Tony Cross at 15:55 1 comment:

Last night was the first in the next good set of tides for ringing waders at Ynyslas so I headed down just before high tide. There were a good number of birds present, including at least two Dunlin colour-ringed on the last high tides over a week ago indicating that some birds will hang around a while to fatten-up before presumably moving on. Another colour-ringed bird has already been recorded further south in Cornwall and a Dunlin ringed earlier in the autumn before we started colour-ringing has just been controlled in North Wales.

Last night I managed to colour-ring another 59 Dunlin and had what is probably a record catch for the site of 17 Knot, including a juvenile bird ringed elsewhere. There was added interest in the shape of a Bar-tailed Godwit and a Grey Plover, neither of which are ringed in any number by the group.

I wasn't the only one out catching waders there last night though. Towards the end of the tide a shadowy figure floated low over my head and landed on the sand just in front of me. Two stealthy approaches later (it flew off on the first and landed again a bit further away) and I had yet another Short-eared Owl for the site safely under the net. 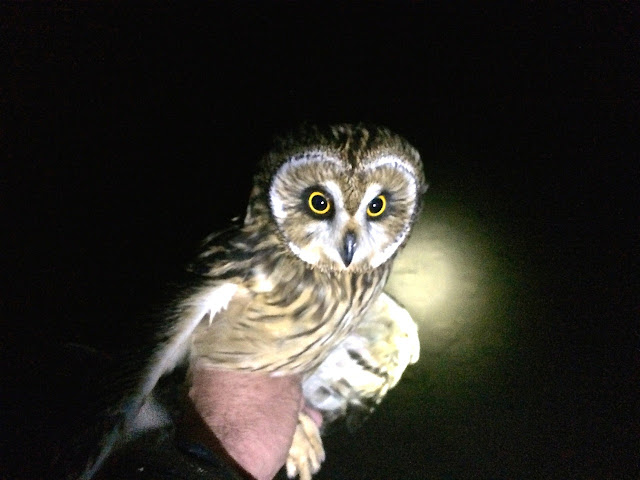 The bird was an adult female in wing moult, so almost certainly a local(ish) breeding bird rather than a migrant, but clearly from her weight she was at least as successful at catching waders as me!