Details for the Portuguese Sanderling seen at Ynyslas on 4th August are as follows:- 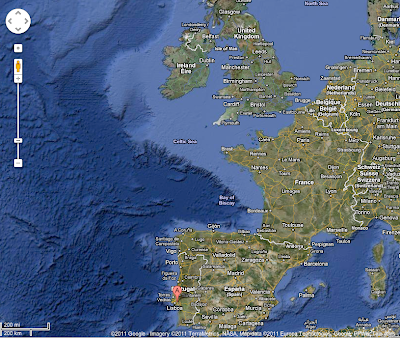 The Rub of the Green

Took my two daughters, Amy and Hannah, down to Glasbury last night to have one final go at netting the Sand Martin colony there. Most of the birds have now finished their breeding activity for 2011 but there were a few still around and we managed to catch 12 bringing the total to well over 300 (and one French control) in just 4 trips. There were also about a dozen Yellow Wagtails and 50 linnets on the shingle but although I did managed to catch a dozen Linnets the Yellow Wags were not having any of it. As dusk approached the calls of a Green Sandpiper brought visions of better things. I quickly set a 60ft North Ron Super Fine across the old ox-bow and went off in search of the sandpiper. A couple of minutes later we were slowly moving no less than 4 Green Sandpipers towards the net! Amazingly (as anyone who has ever tried to catch Green Sands before will know) two of them complied fully and headed straight for the bottom shelf hotly pursued by one very happy ringer. Dad, we didn't know you could run that fast!!

Not a single Green Sandpipers was caught in Wales during 2010! 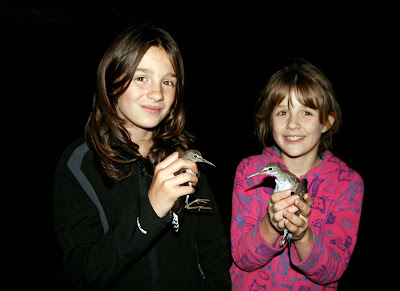 Our first ever RAS submission!

Have just completed and sent in my first ever RAS (re-trapping adults for survival) submission, for Hawfinches in North Wales! All pretty painless I have to say! This year, after thinking about it for quite a few, I registered three schemes with the BTO. One on Hawfinches, one on Dippers and one (jointly with Adrienne Stratford) on Choughs. It is particularly important nowadays that as well as enjoying the process we should all strive to maximize the conservation benefit of the ringing we do. 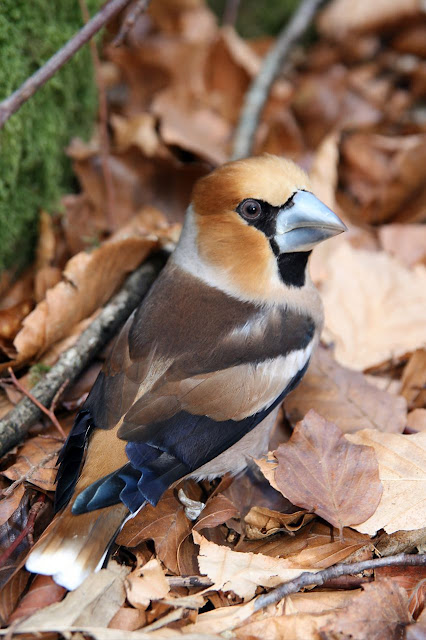 I was absolutely staggered to discover that in the first season we made 194 captures of Hawfinches at our site in North Wales including 128 new birds and 1 Norwegian control, which had originally been ringed as an adult male in Mandal, Norway on 15th April 2010 (925km NE). 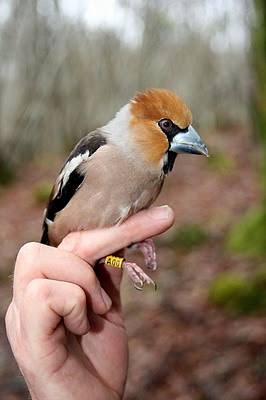 Massive thanks to Dave Smith for making it all possible, to Jerry Lewis for showing the way, and to the many ringers who came along to help! Fingers have almost recovered enough for next season!

Long-eared Owl? - well getting there!

Following a tip-off from Red Liford I high-tailed it up to my old home village of Cwmystwyth last night to see if I could catch two young Long-eared Owls that he had heard calling near to his house. Sure enough, both chicks were sat out on fence-posts on the edge of a small plantation and were soon caught with a torch and landing-net. The length of the "ears" and the down on the head confirmed that they had only recently fledged, much later than would be considered normal. 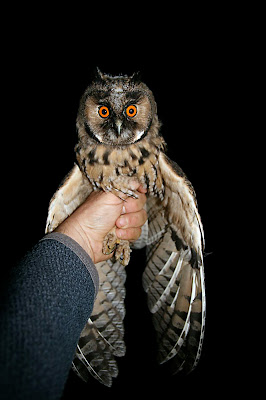 This isn't just a Hobby

Just back from a very wet 10 day camper-van holiday in Scotland with Caroline and the kids. Whilst we were away I was notified that Michelle Frater had located a new Hobby nest with large young aaargghhhh!!!! That very nearly brought the holiday to a premature end!  Almost as soon as we got back I was heading off just over the border into Shropshire to meet Michelle and Leo Smith to see if it was still possible to ring them.  The three chicks were quite large but extremely well-behaved! 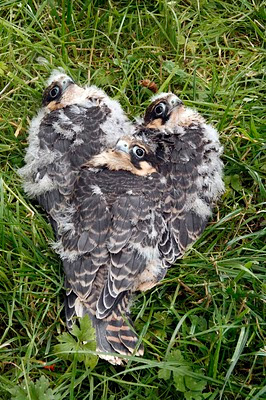 Following this success myself and Leo joined up with his girlfriend Josie to try and locate another nest at a site where he had recently heard adults alarm calling. Sure enough we soon managed to located the nest in a streamside alder tree. Finding the landowner was equally simple and it turned out he had already given us permission at another nest nearby! It was great to see that he was genuinely pleased to have Hobbys nesting on his farm and as amazed as we were when it turned out to be two pairs with a total of five young between them!

Following the successes of last year, with one young Hobby recovered on its southwards migration in the French Pyrennes and another identified by its colour-rings recently at Minsmere, both myself and Paul made big efforts to increase the number of Hobby nests that we ring at. So far this year the total is an amazing 21 chicks and 4 adults including the female shown below with the unusual head arrangement! 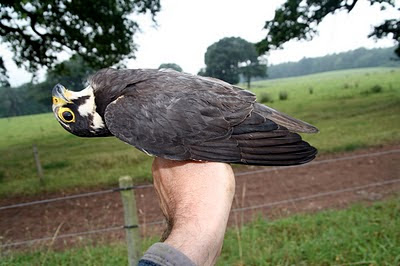 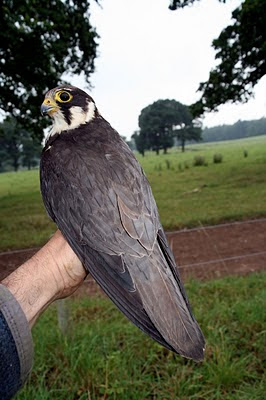 ah,  that's better, only temporary thankfully!
Posted by Tony Cross at 19:30 No comments:

Foreigners on the beach

A quick visit to the high tide at Ynyslas this morning proved very rewarding. Amongst a group of 15 Sanderlings was a colour-ringed bird originally ringed in Portugal (bottom right in photo). Several ringed Sandwich Terns, including one with a Dutch ring (centre), and a Black-headed Gull were also present.  I managed to read all but one of the numbers on the Dutch tern and two of the BTO-ringed ones. Hopefully ringing details will follow shortly.

The World's most expensive Sandwiches?

With a maximum count of nearly 200 Sandwich Terns in the Dyfi Estuary recently it was time to head to the point with some wader nets and see what the tide would bring.  On 2nd August myself and Jane set 3 60 ft nets on the shingle, a time-consuming operation as the nets have to be secured to mountains of piled boulders so that the guys don't pull out once the sand gets wet. Satisfied that the nets were grand we sat back to listen to the restful sound of Sandwich Tern played very loudly through my sound system. As the hight tide (and 500 oystercatchers) approached expectation built! Thankfully all but a few of the oystercatchers departed leaving the nets to their intended targets. As the water surged under the net, in near perfect weather conditions, we started to catch the first few terns and by the end of the evening had caught 7 new Sandwich Terns.  A major downside to the evening was the premature end to catching caused by the submergence of one very expensive sound system into the Irish Sea! The sounds of my disapproval could be clearly heard in Aberystwyth! I must send a note to the ringers forum letting everyone know not to drop iPhones into salt water (or any water for that matter!!).

Never to be deterred a repeat visit the following night was more productive with another 9 new and two control Sandwich Terns, 2 Sanderling and 2 Oystercatchers and thankfully my already replaced, brand new iPhone stayed remarkably dry! 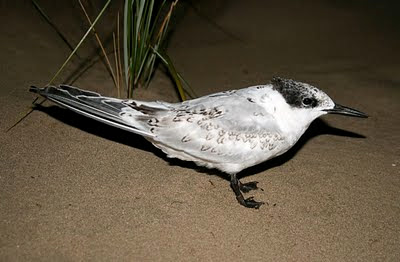 Juv Sandwich Tern having a quick shake before the off!