Just had notification of another exciting record of an ex Newtown Waxwing scoffing cotoneaster berries in Bovey Tracey, Devon. This bird, a first year male, was ringed on 16th December and was one of the last few caught before they all moved on. Many thanks to Alan Edmondson for the record and photograph 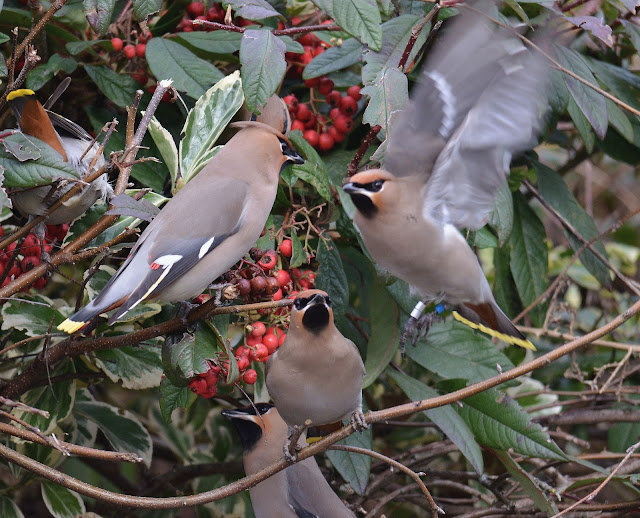 At the end of last year, in a rare and exciting opportunity, we managed to catch exactly 100 Waxwings in Mid-Wales and, thanks to Raymond Duncan of Grampian Ringing Group, we were able to individually colour-ring almost all of them. So far we have been informed of 11 long-distance re-sightings of these birds from various locations in England and Wales as widely separated as Cardiff, Lewes in  East Sussex and Northumberland. Most of the sightings have been accompanied by excellent digital photos confirming the colour-rings present so we can be 100% sure of the accuracy of these resightings. We would like to thank all the birdwatcher and photographers who have taken the time to report their sightings and helped us to show the onward movements of the Newtown "flock".  It is amazing that these highly gregarious birds obviously do not move around as a cohesive group but must continually disband and rejoin other flocks as they disperse.

Some shots of the movers! 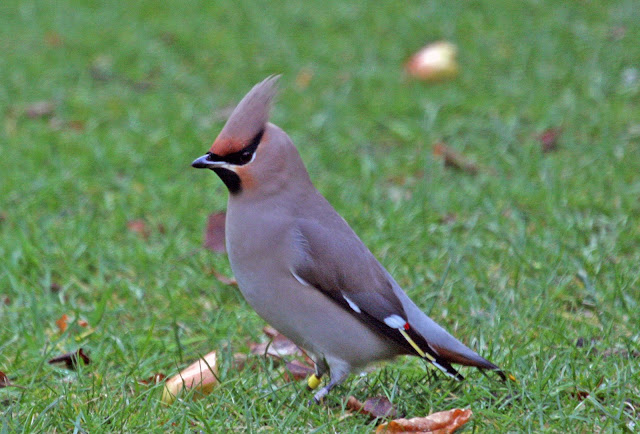 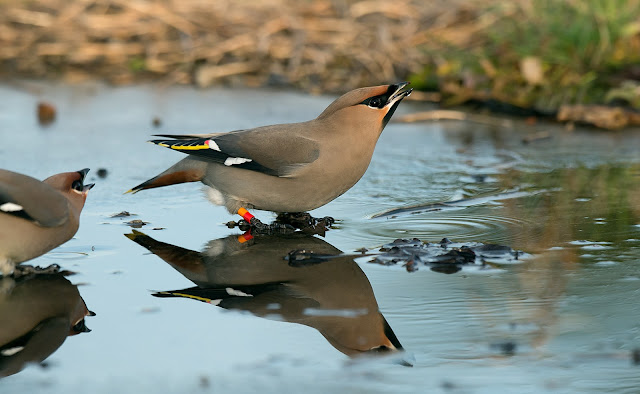 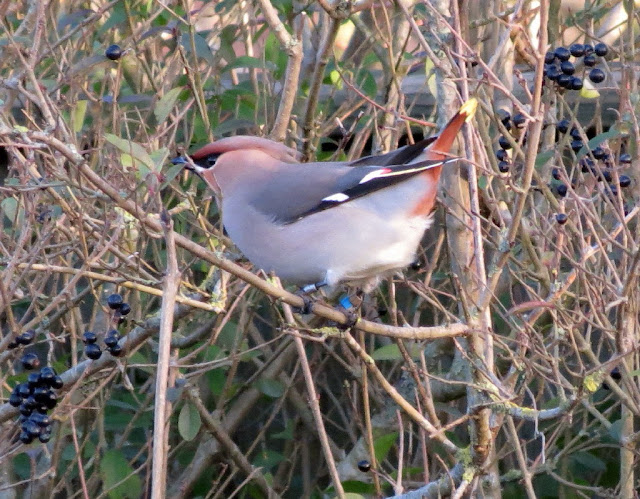 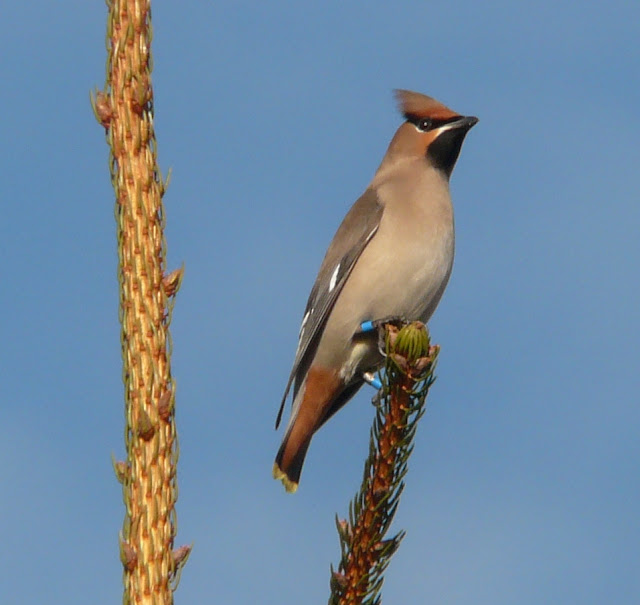 Hopefully all the above birds are still alive and well and already residing in new locations waiting to be rediscovered.

In a recent batch of recoveries from BTO headquarters we learnt the fate of two additional birds that weren't so lucky. One was found trapped in Harris fencing in Stafford and the other was killed by a cat in Bray, Co. Wicklow. A sad end to an amazing movement and a bloody good illustration of why, if you like birds, you should think twice about owning a cat! 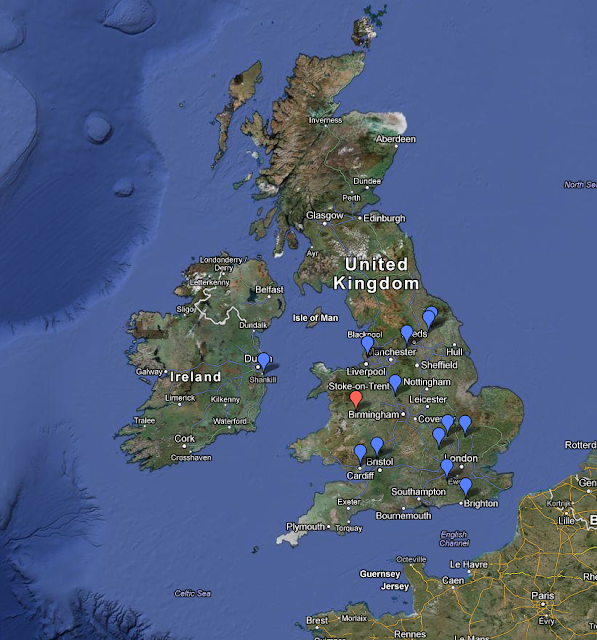 All movements reported to date of Waxwings ringed at Newtown College, Powys in Nov - Dec 2012
Posted by Tony Cross at 22:23 No comments:

Over the past few days finch numbers have been building in the garden, so I decided to put the traps back under the bird feeder. It turned out to be a very good idea, because in the last 4 days (usually just an hour or so in the morning) I've already trapped and ringed 28 Goldfinches, 7 Lesser Redpolls and 2 Siskins. 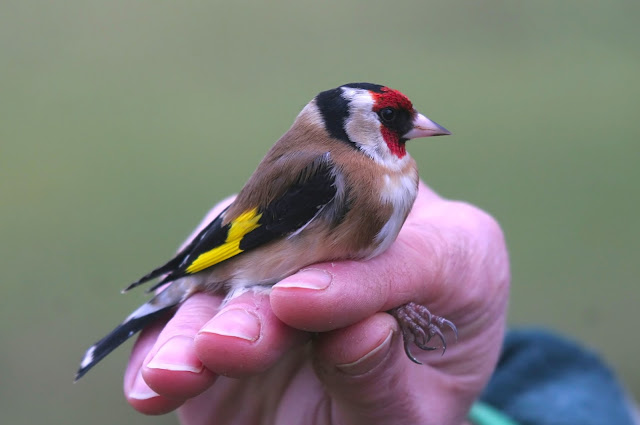 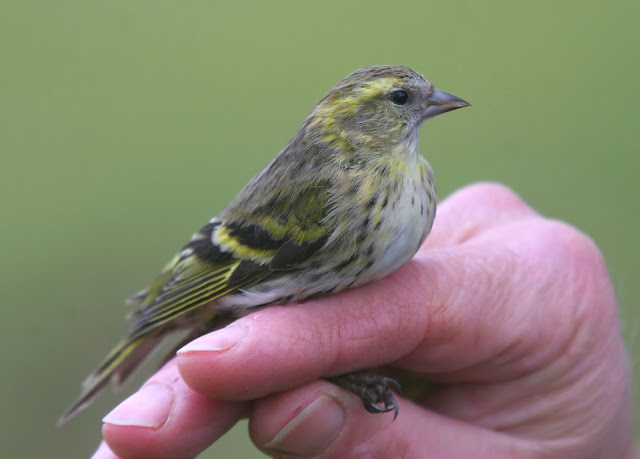 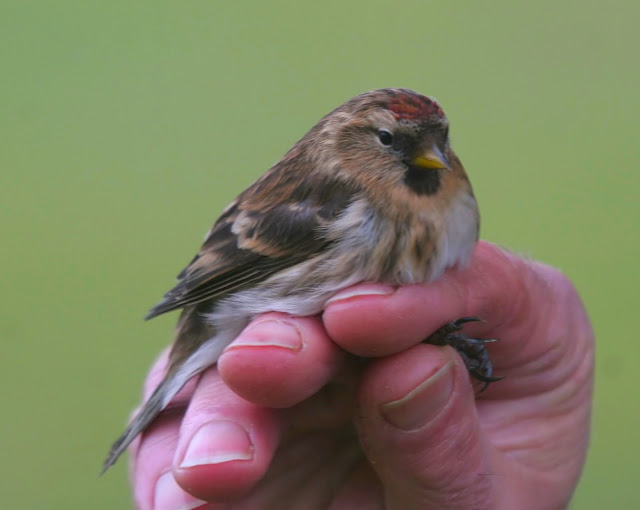 While out checking Dipper boxes, and putting up a few new ones with Tony today, he noticed this tree with a huge hole in it and said 'that looks good far a Barn Owl'. After a bit of inventive climbing, I found this cheeky chappy roosting in there. 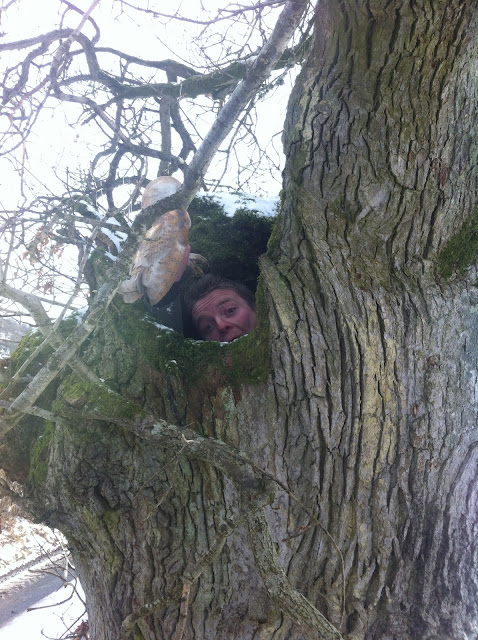 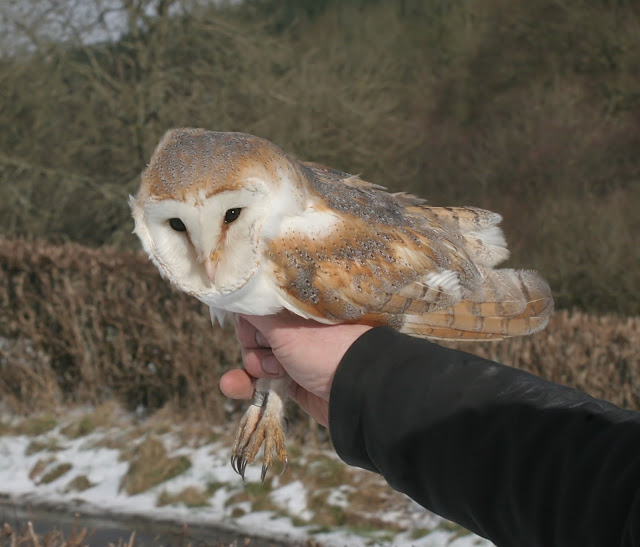 Thursday was the meeting of the UK Red Kite Co-ordination Group, this year hosted by the Welsh Kite Trust and held in Rhayader. Several of the delegates, namely Ian Carter (Natural England),  Adam McClure (RSPB Northern Ireland) and Marc Ruddock (Golden Eagle Trust) were keen to stay on after wards and try a bit of lamping. Following the recent snows the number of birds at our regular inland sites has been quite low so I decided to head for Ynyslas in the hope of meeting up with a few of the thousands of Woodcock, Golden Plover and Lapwing that had been pushed westwards. As it turns out there just weren't that many birds to be had at the coast either but we did manage to catch 3 Woodcock, a Snipe, a Fieldfare and a Redshank which seemed to be enough to demonstrate the technique. 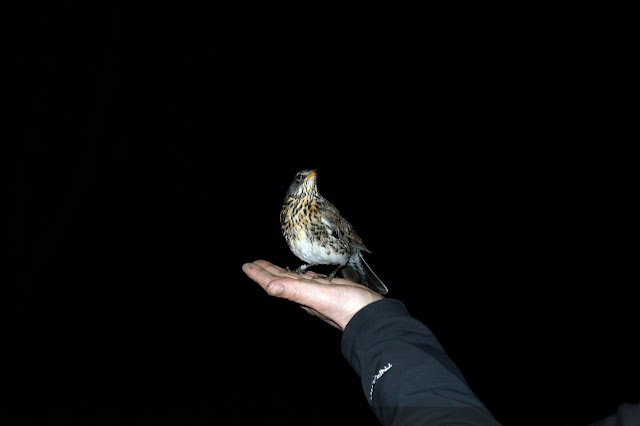 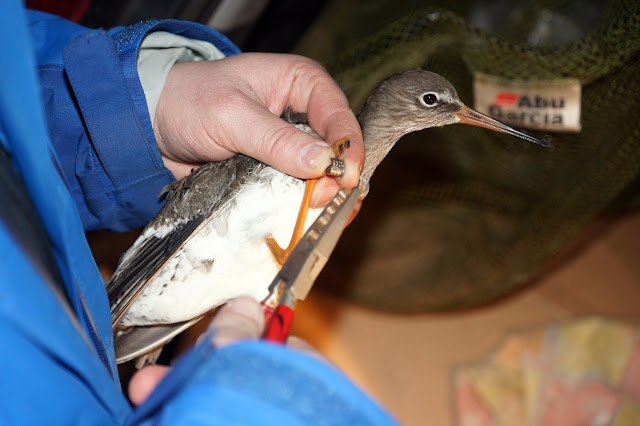 The following day Ian and Marc headed home but Adam's ferry wasn't sailing until the evening so we spent the day checking owl boxes around Tregaron Bog. In all 9 Barn Owl boxes were checked and cleaned out. Worryingly only one Barn Owl was seen (and we missed catching it). Several of the boxes had recent pellets but no owls - hope they didn't all perish in the snow! One box held two roosting Tawny Owls of which we managed to catch the female who had been ringed originally in a neighbouring box this time last year. 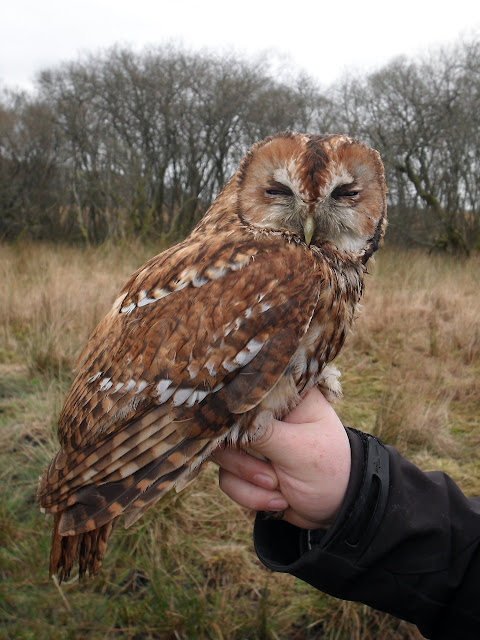 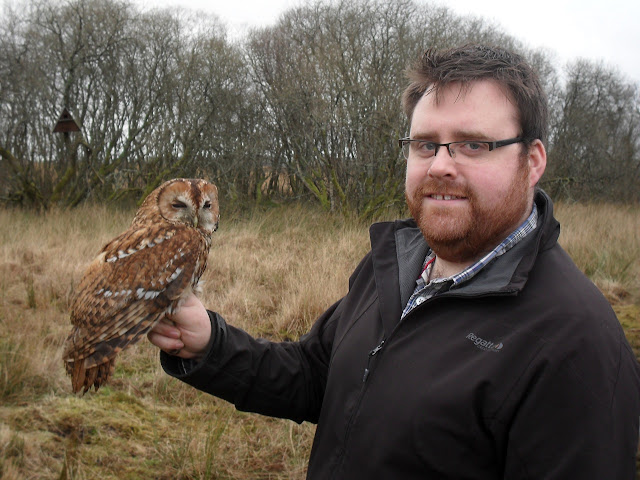 Tawny Owls are always a bit of a treat for our Irish colleagues - they don't have any!

Also installed a few more Dipper boxes, including one under a low bridge where I misjudged the water level and managed to get a bit wet! 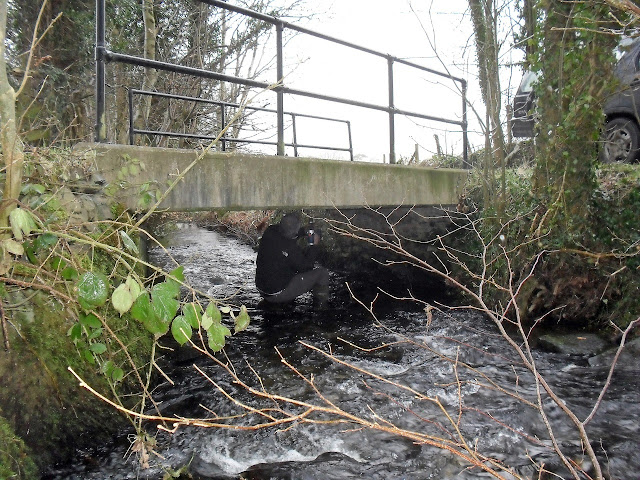 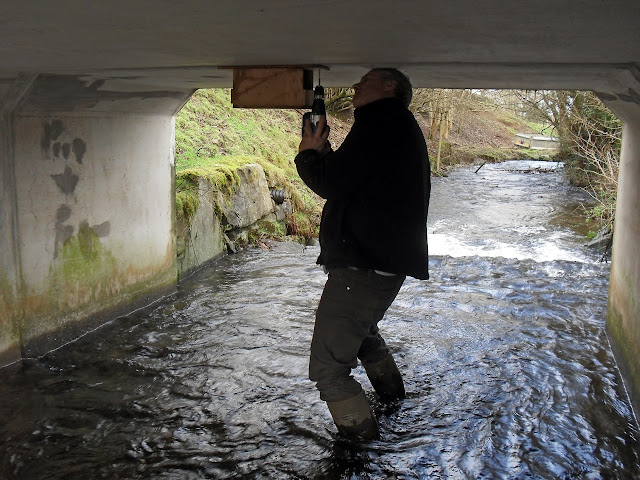 I wonder what the incidence of short billed woodcock is in the overall population, out of the past 170 birds caught I have had three with bills between 45 and 50 mm. The normal length is between 70 and 80 mm tip to feather. These birds were all of good weight and so clearly it's not as much of a disadvantage as one might think.
Posted by owen williams at 08:14 No comments: