Ringing the entire population output of England in a day!

There can't be that many species where you can say that! On Wednesday night I drove down to Cornwall for my annual Cornish Chough ringing trip. Every year for the past 13 years (since Choughs recolonised England naturally from Ireland) the RSPB have monitored the population and mounted nest-watches using an army of dedicated volunteers. Even though most of the nests cannot be viewed directly the observations of adult behaviour the volunteers make give an accurate assessment of how old the chicks are at each nest and allow me to time my ringing visit to best effect. This year there were five nests still going and luckily there was only about a fortnight between the earliest and latest which meant we could ring them all on one day. 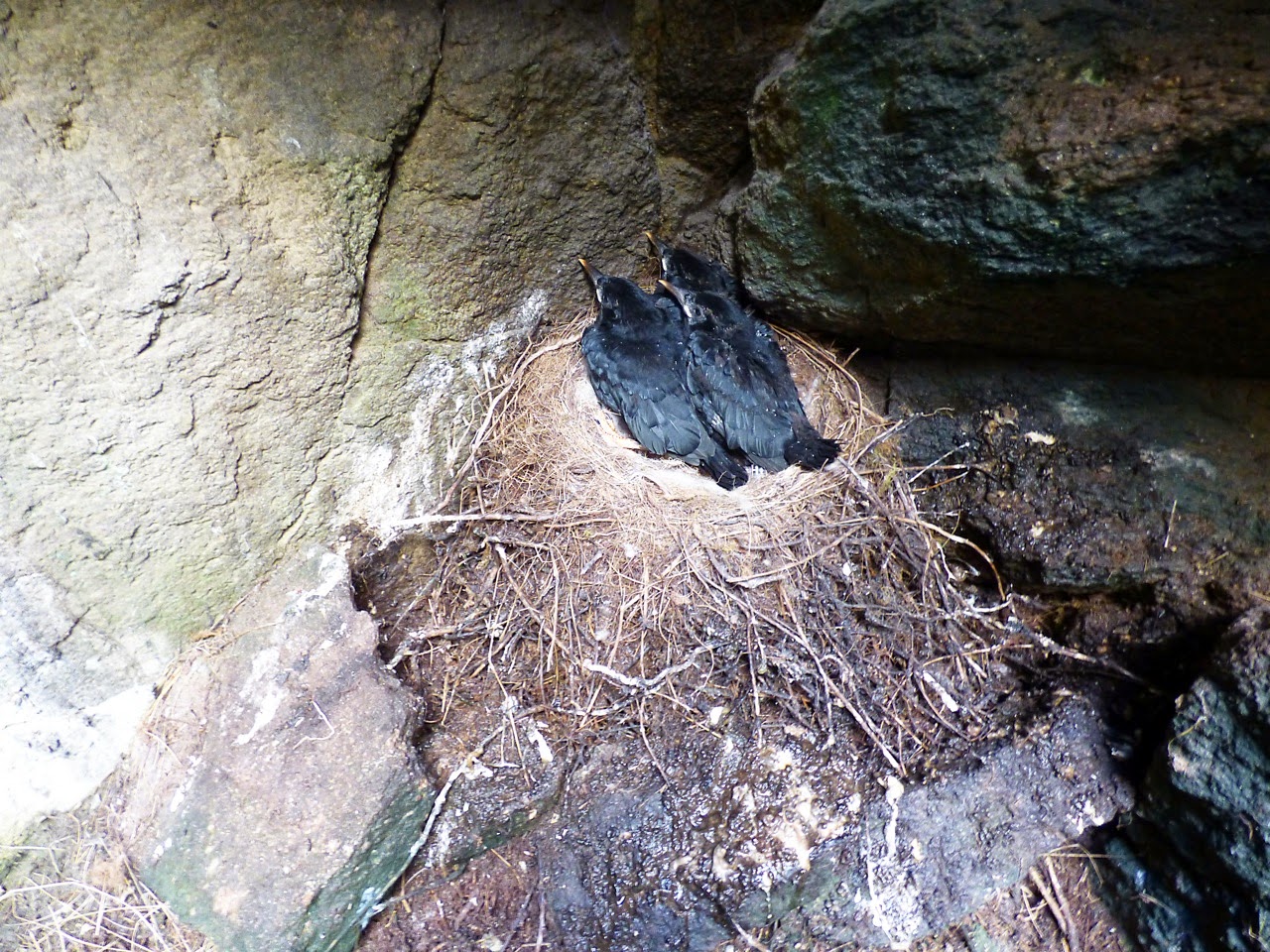 Three Chough chicks safely returned to their nest on a ledge 30ft down a Cornish Tin Mine. Great care is needed taking the chicks out of the nest and returning them as there is still a long way to go to the bottom!! See below 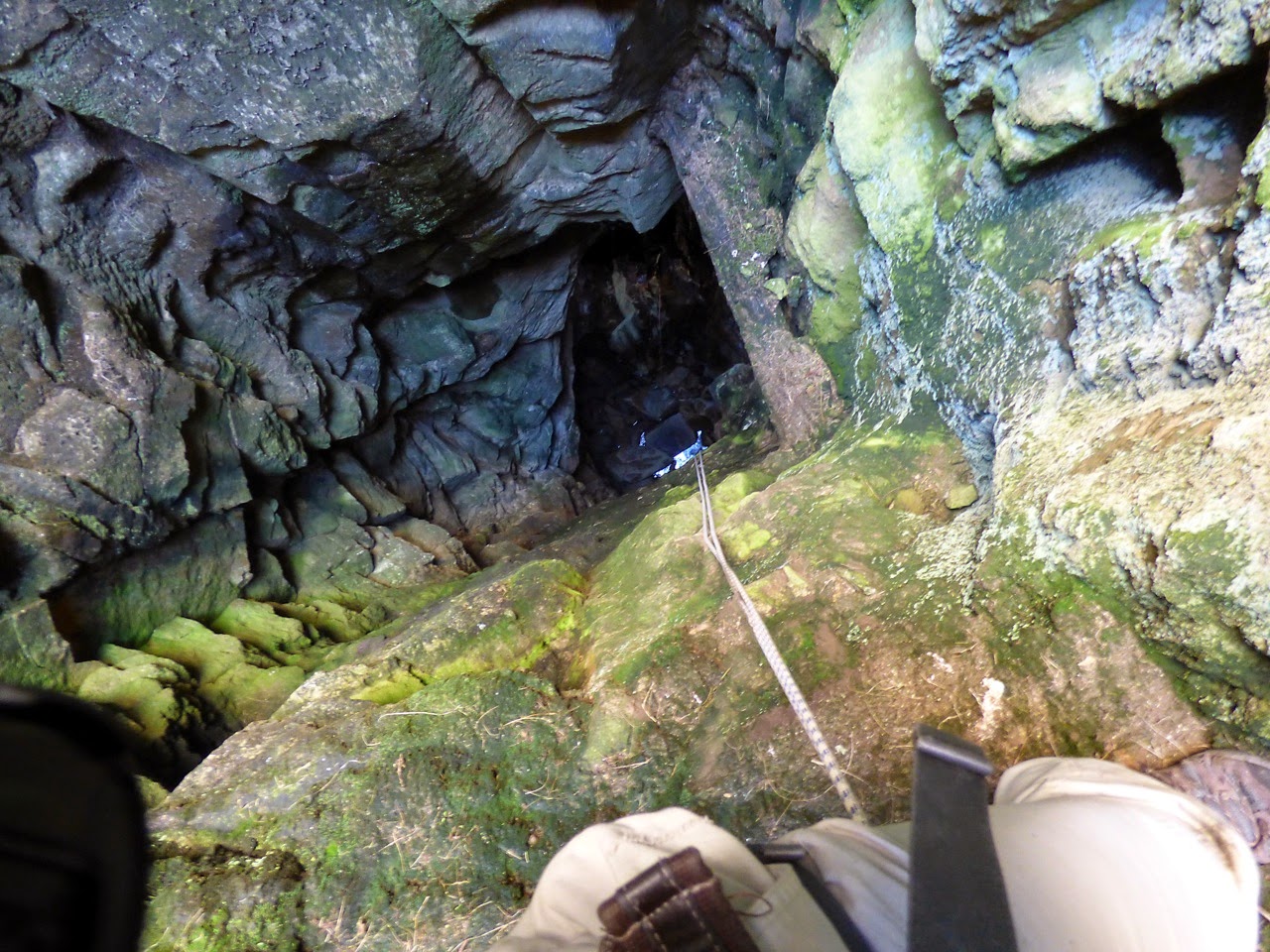 The nests are in a variety of sites comprising three sea caves and two mineshafts. Access is not easy and involves using ropes or ladders so by the time we finished the last nest at 8 pm I was pretty shattered and faced a six-hour drive home!

Seventeen chicks were ringed in all - one brood of two, two broods of three, one brood of four and one of five. By chance there was a serious sex imbalance in the early years of recolonisation, with far more males produced and surviving than females. Happily the estimates of the sex on the 17 chicks ringed yesterday was 9 males and 8 females. 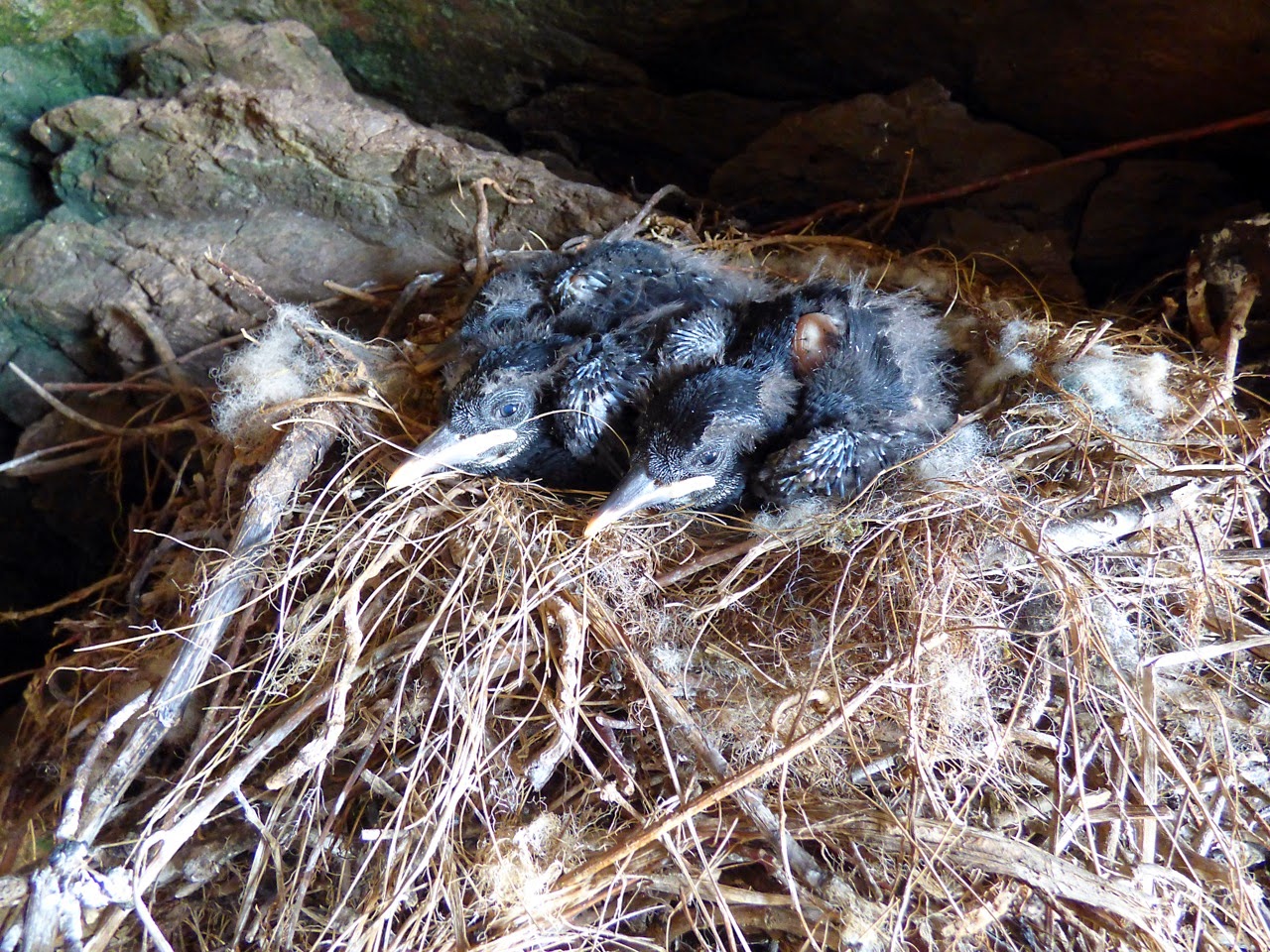 The original Lizard nest is still active and contained three chicks but this year two new adults have replaced the original pioneering pair that has nested there for the past 12 years.

Many thanks to Claire Mucklow of RSPB South West for arranging everything including access permissions and to Nicola, Cat and Keith for their invaluable assistance. Many thanks too to the National Trust on whose land most of the nests are located. More info on the Cornish Chough Project can be seen on their website at http://www.cornishchoughs.org 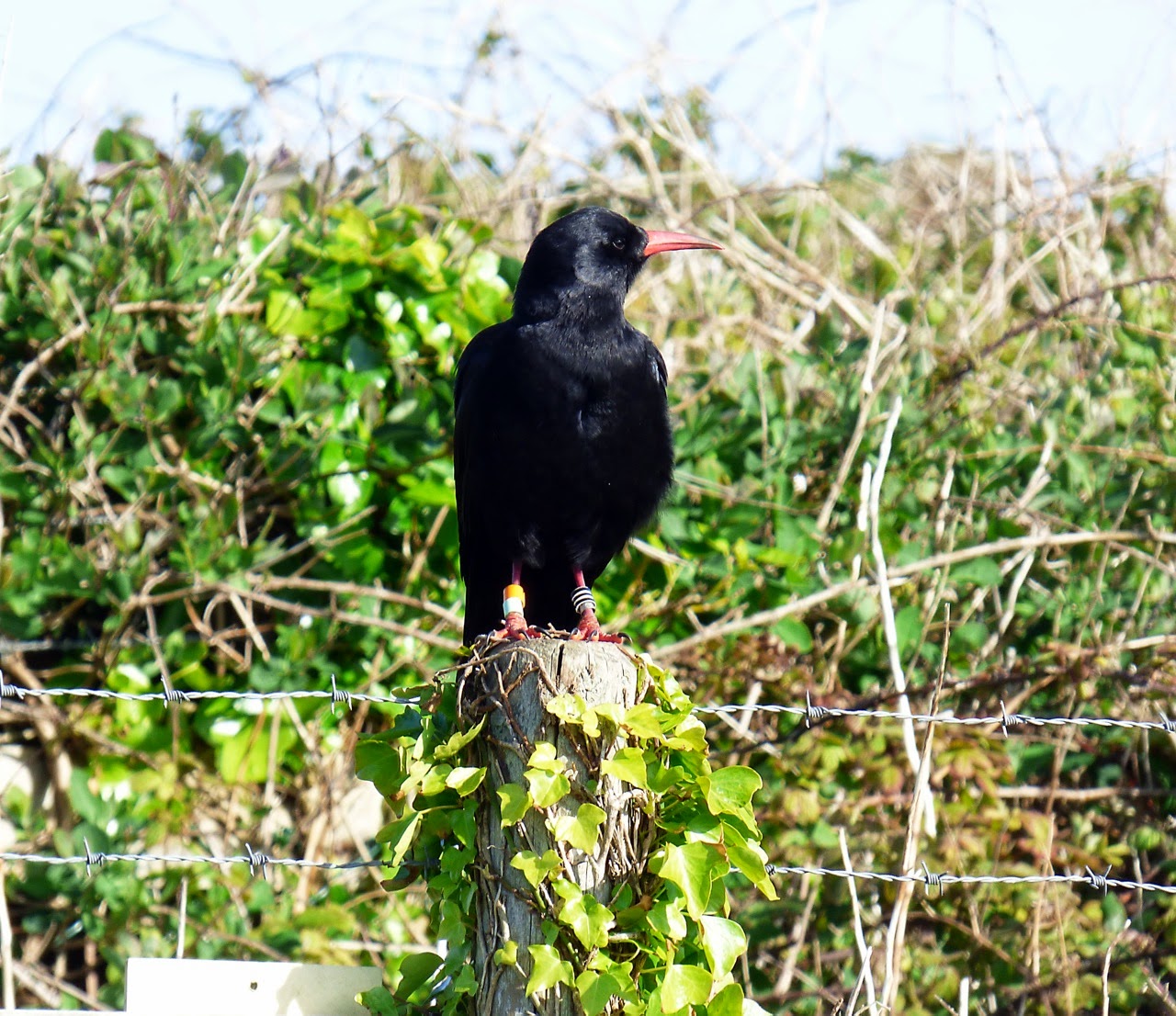 Virtually all of the Choughs present in Cornwall are colour-ringed which has allowed valuable and detailed records to be gathered on the growth and spread of a natural recolonisation.
Posted by Tony Cross at 19:56 1 comment:

Yesterday I went along with Adrienne Stratford (and Kelvin Jones) to help her ring her first brood of Choughs of the year in a mineshaft in the Snowdonia National Park. Along for the ride (appropriately licensed by Natural Resources Wales of course!) was TV celebrity and survival expert Ray Mears and his film crew. The ringing will feature in Ray's new series of Wild Britain to be broadcast this autumn and will hopefully show why ringing is such an important tool in understanding much more about bird populations than just migration. No more details here, you'll have to watch the programme. I'll spoil the ending though - we all survived! 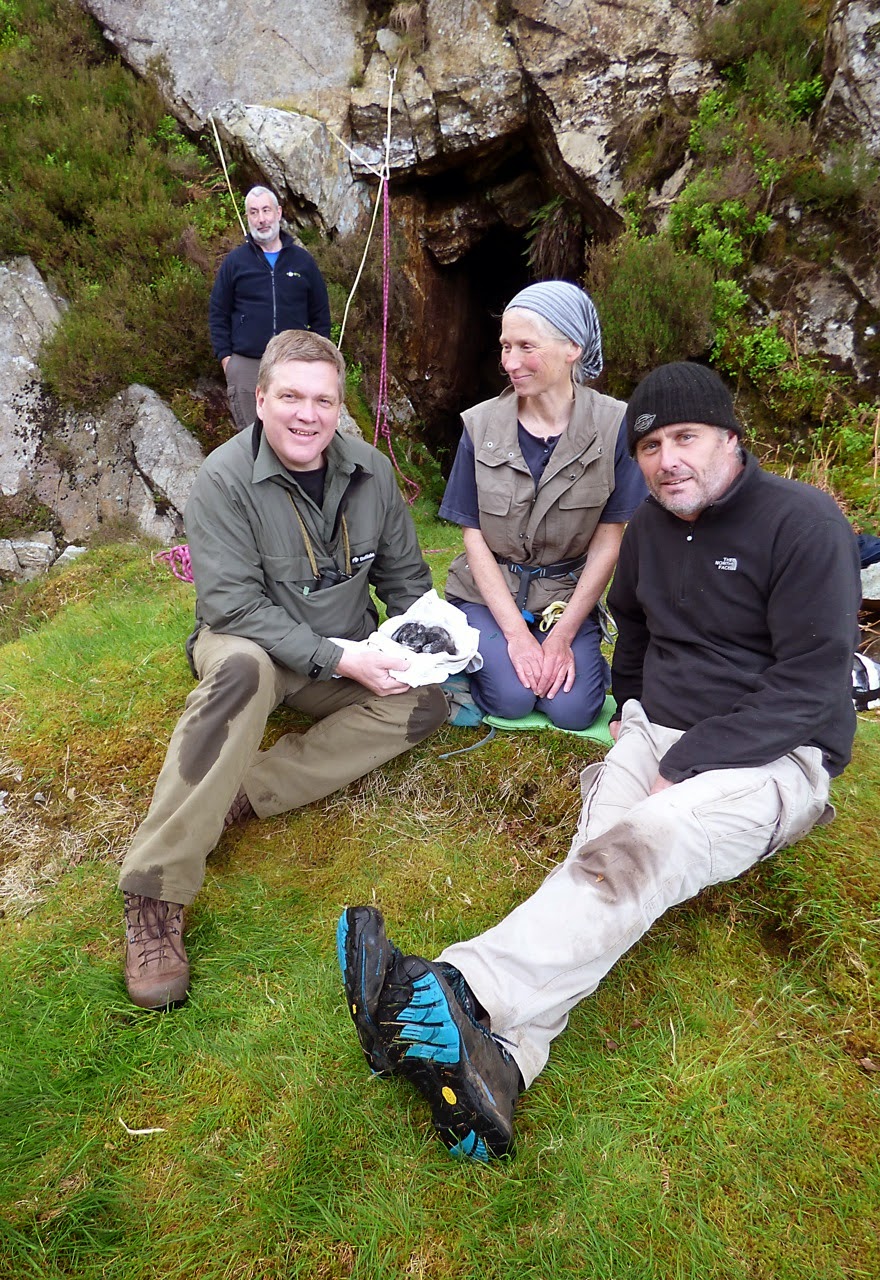 When we started our Whimbrel colour-ringing project four years ago, one of the main questions we wanted to answer was to what extent birds used the same staging sites in West Wales in subsequent springs. So far we have had little evidence to support the idea that they do but last night Brendan, Hannah and I caught 11 more Whimbrel including A77 which was originally ringed at the same location on 13th May 2012 - our first ever record of a returning bird. 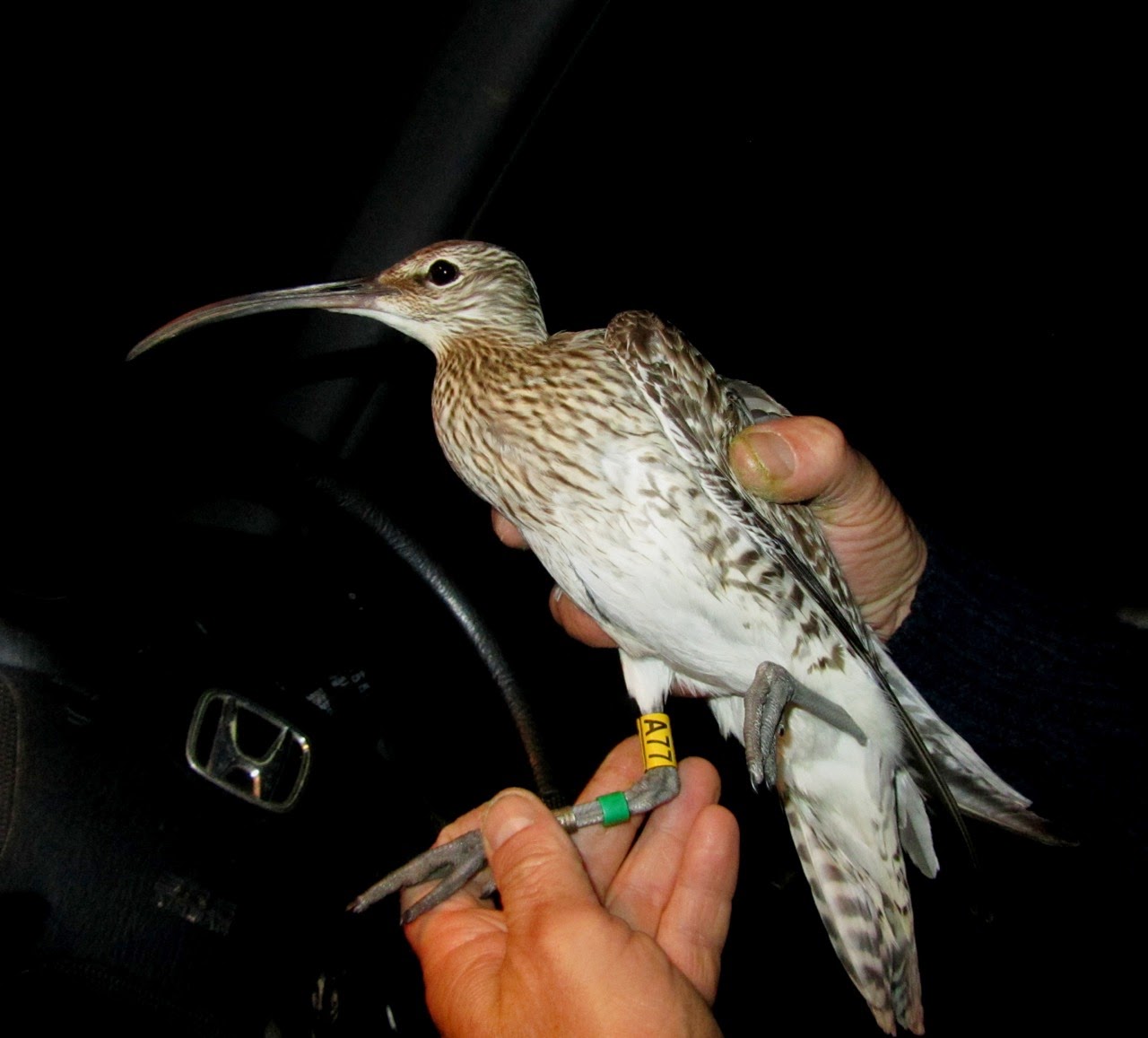 Also caught last night was a Dutch-ringed Bar-tailed Godwit, which, judging by the amount of wear on the metal ring, has been kicking about for a few years. As the bird was also colour-ringed it will be interesting to find out where else that has been seen. 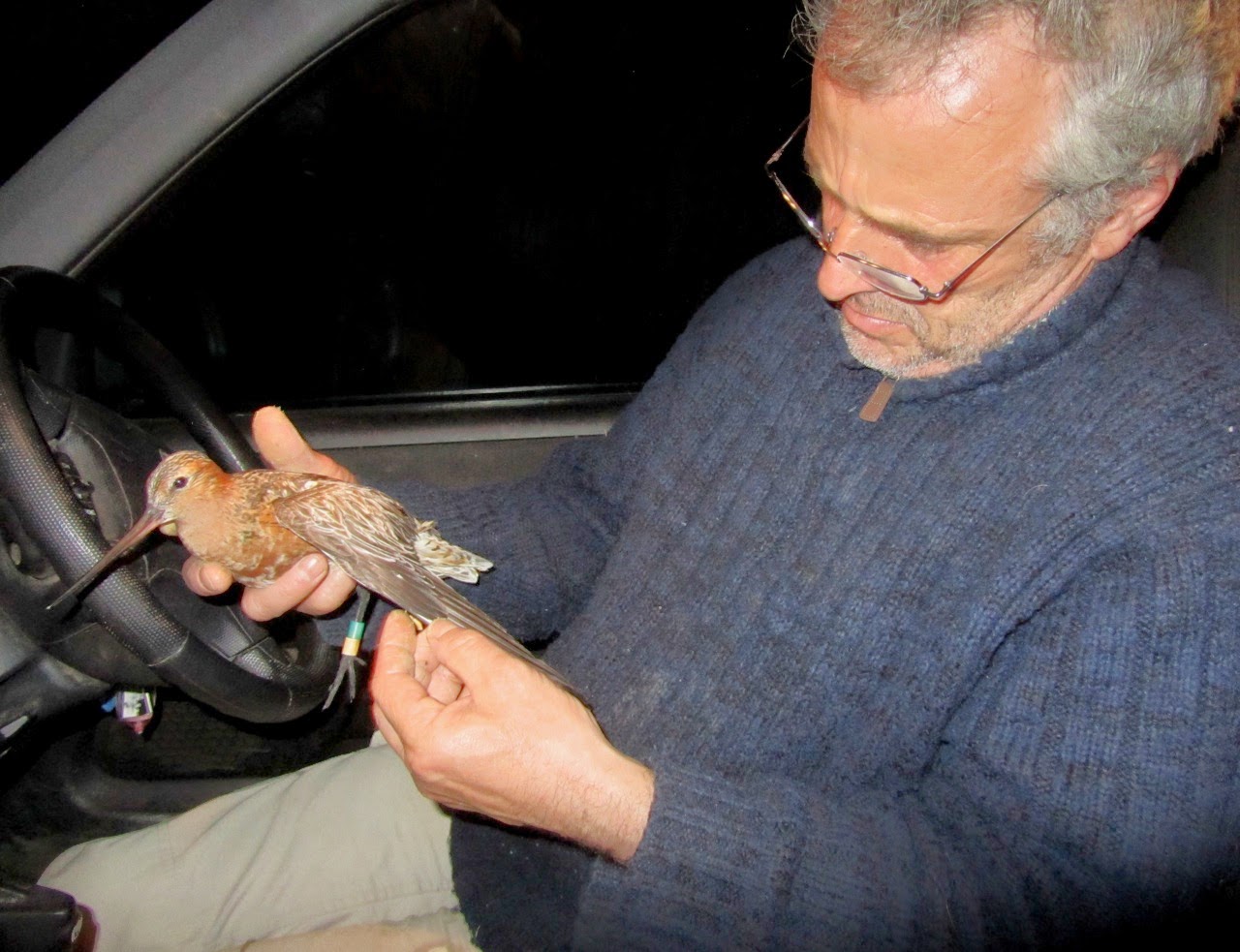 What a Great Spot

Yesterday was the first round of checking most of my nest boxes around Tregaron and Strata Florida - in all nearly 200 boxes. I've been doing some of these boxes for nearly 30 years and yesterday I had a species in them I've never had before!

Whilst going around the one wood it was apparent that a Great Spotted Woodpecker had been wreaking havoc, attacking a lot of the boxes and opening the sides, despite most having metal plates. On getting to one 'damaged' box I opened the lid and inside was a Great Spot, instinctively I reached in and grabbed it before it had chance to make its escape. Amazingly, and completely unexpected, underneath her were two eggs! 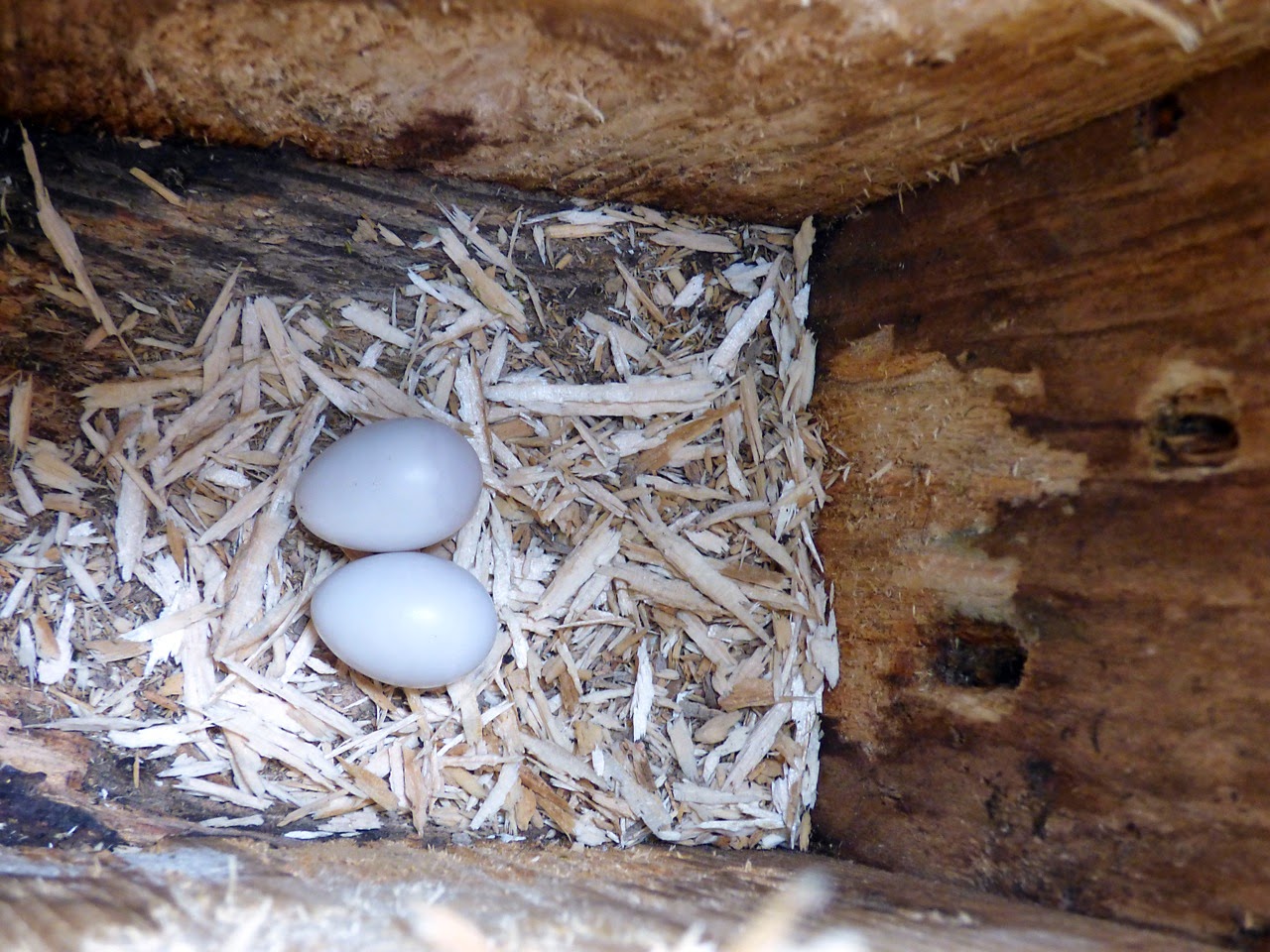 Whilst examining the bird it soon became apparent that she had a dead left leg (see top photo). She was otherwise in good shape so I decided to ring her anyway. I'm not sure if her dead leg was part of the reason she had opted for the easy option of using an existing hole in a nest box rather than excavating one but it may have been. Interestingly the stiff tail feathers, used as props when on a tree trunk, were all slightly skewed to the left presumably as a result of not sitting on the tree straight. 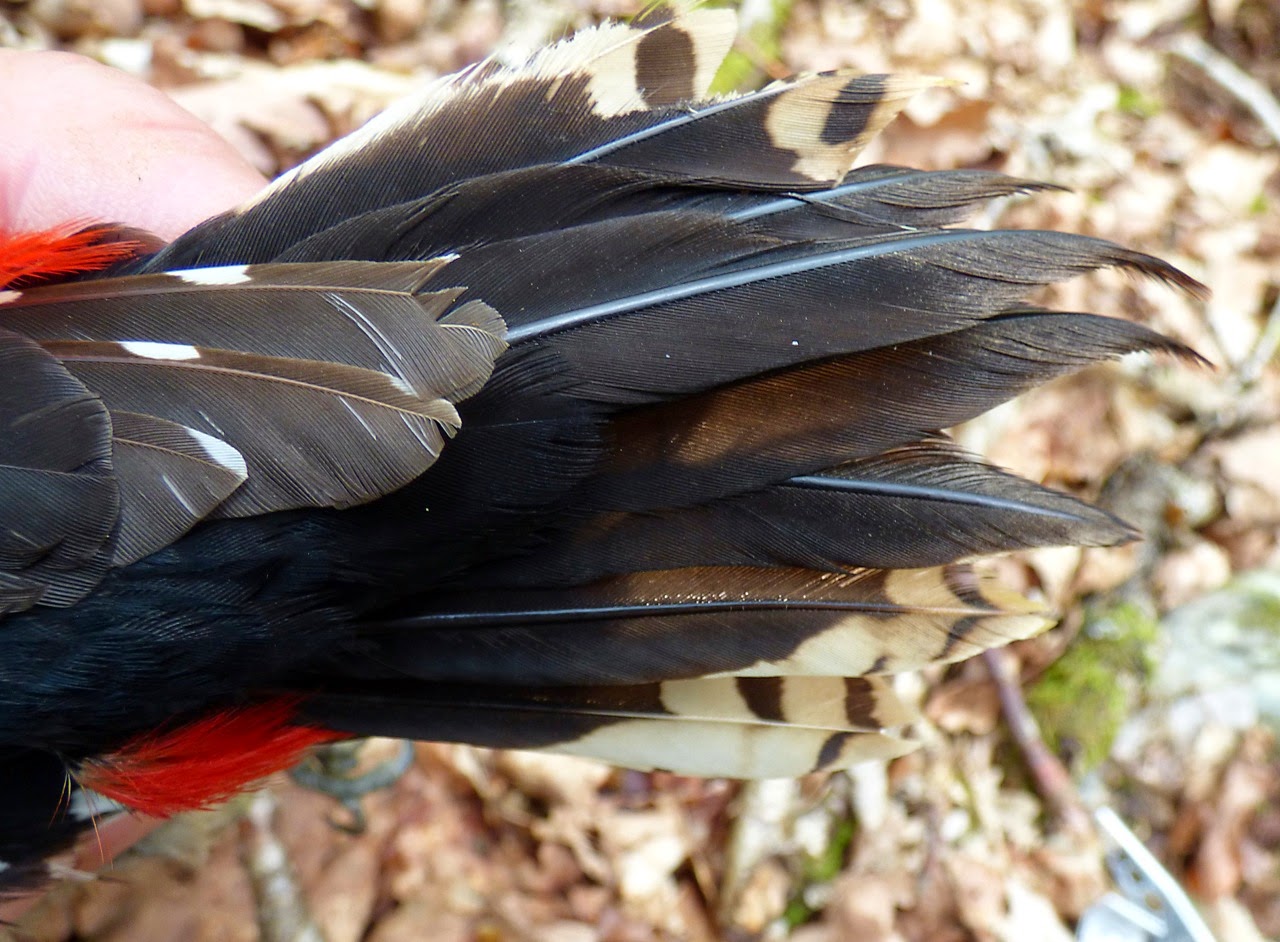 On release she flew to a nearby tree and proceeded to hop up it near normally, infact, if I hadn't just handled her I would never have noticed the difference. Will be great to see if the eggs hatch and they produce the first brood of Great Spotted Woodpeckers I'll have ever ringed.

Other nests included at least 27 Pied Flycatcher,  5 Redstart, 3 Nuthatch and a load of tits! 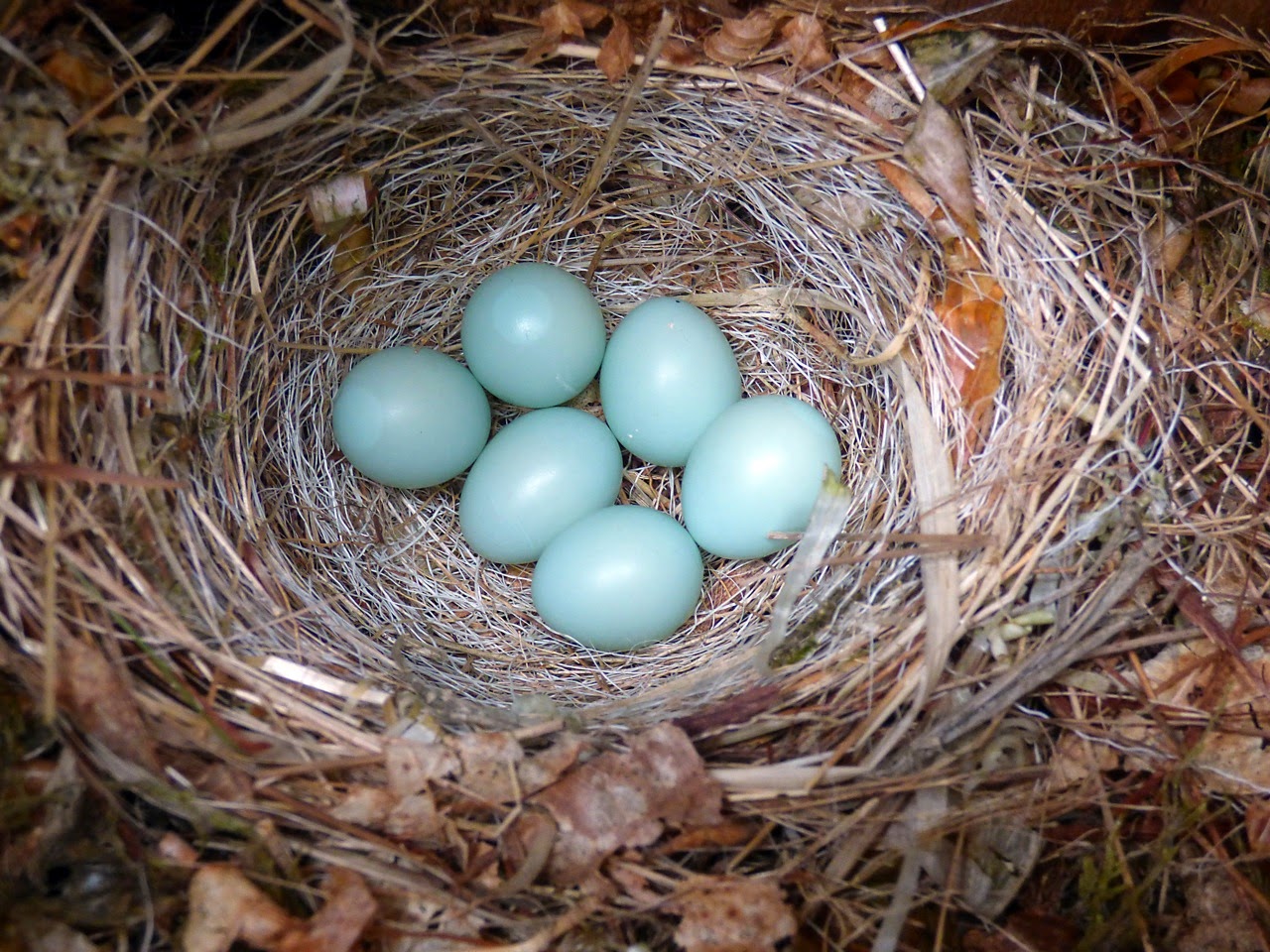 Some of the Pied Flycatchers and Redsatrts had started incubation but most were still clutching-up
Posted by Tony Cross at 14:11 No comments:

This afternoon I had one last go at ringing some first brood Dippers and catching  a few extra adults for our RAS project. Whilst sitting in the car watching a 20ft net I had over the stream (trying to catch an adult Dipper wearing a BTO ring only) a small bird flew into it. For the next 10 minutes or so, without a pair of bins to hand, I pondered the identity of the small bird with a white head, lying upside down in the net. I did get it right but you can see why I was having difficulty. 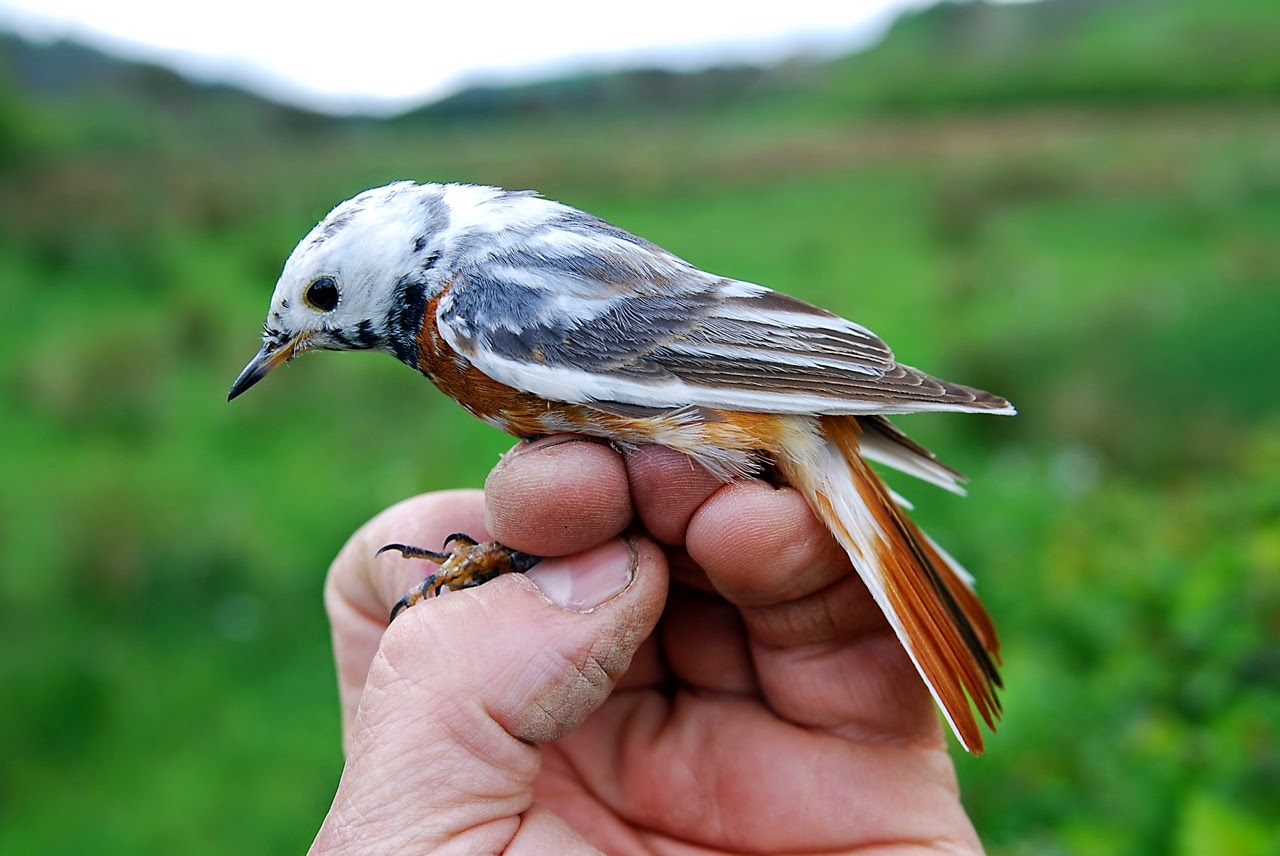 One of the benefits of working on the National Chough survey at the moment is that I get to spend a bit more time than usual in North Wales where there seem to be lots more Cuckoos than there are in Mid-Wales.

Dave and I have had a quick go at catching some over the last couple of mornings with my newly acquired stuffed Cuckoo from a nic-nac shop in Clun (a very fortunate find). We have caught three so far but hope to increase that number in the near future. 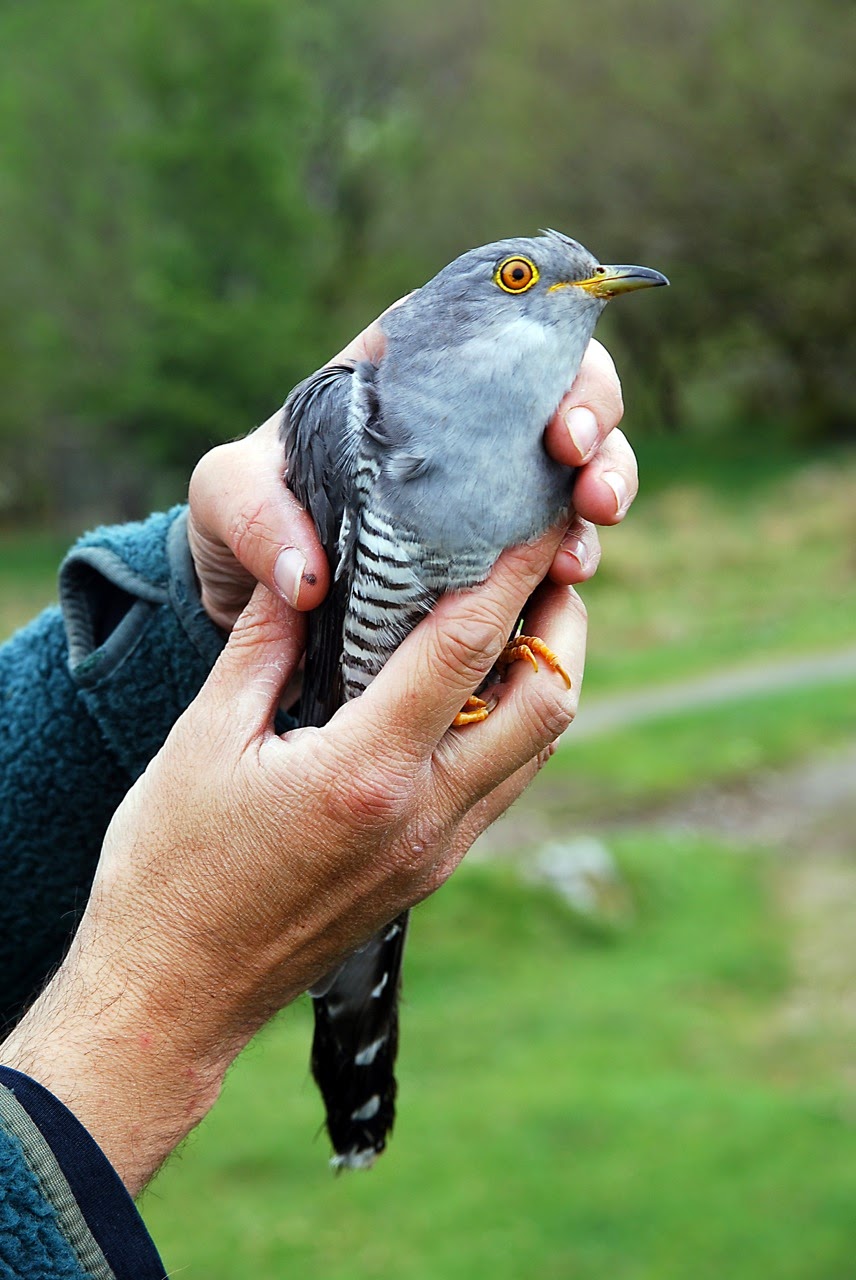 One of the three male Cuckoos caught so far this year. It has no name, just a number!

On the way to one of the sites, in the very early hours, we spotted a Long-eared Owl coming out of a small clump of trees on the side of the road. Closer inspection on the way back (having successfully ringed two Cuckoos) revealed an old Magpie nest full to the brim with 6 Long-eared Owlets and an infertile egg. 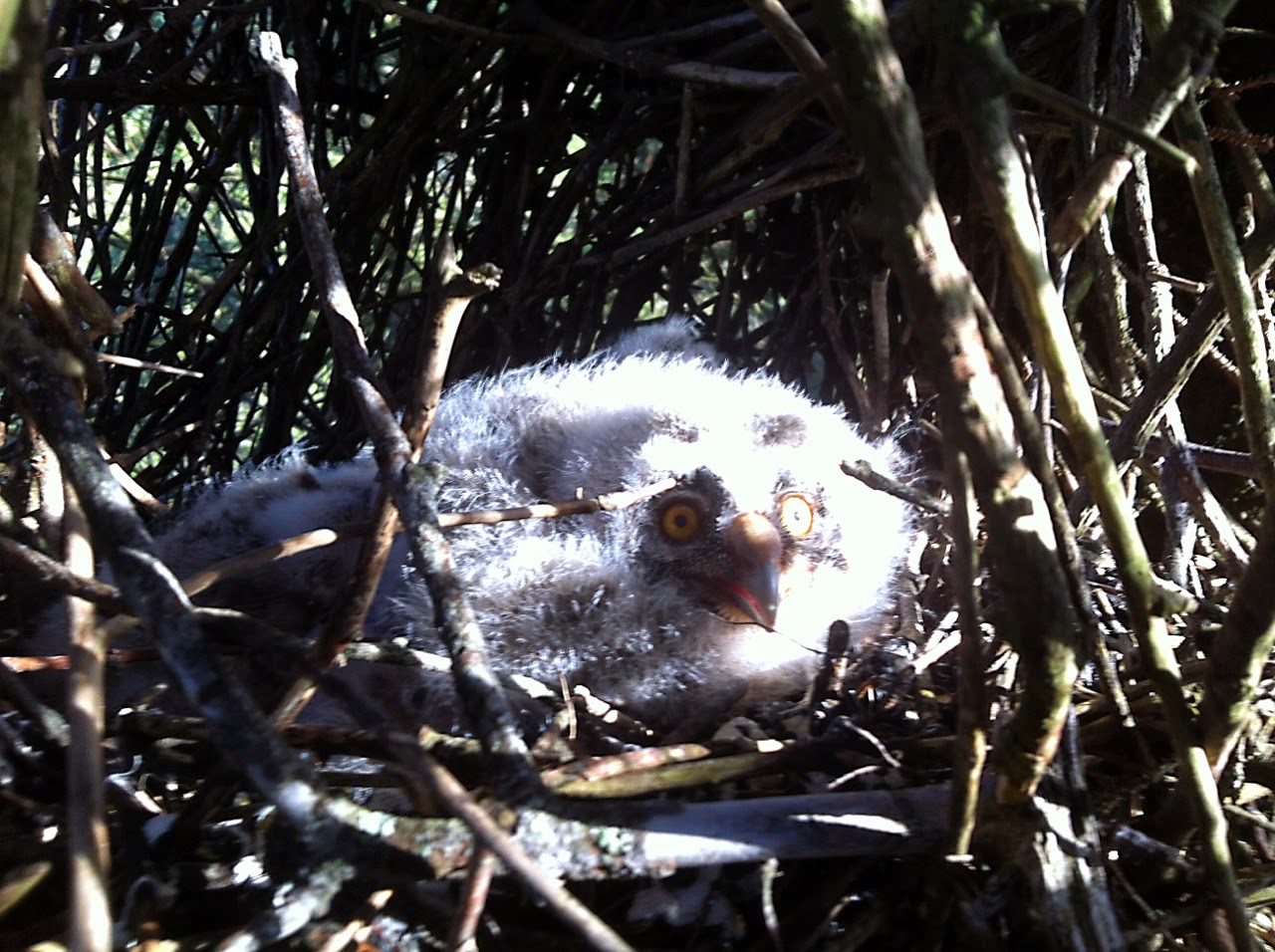 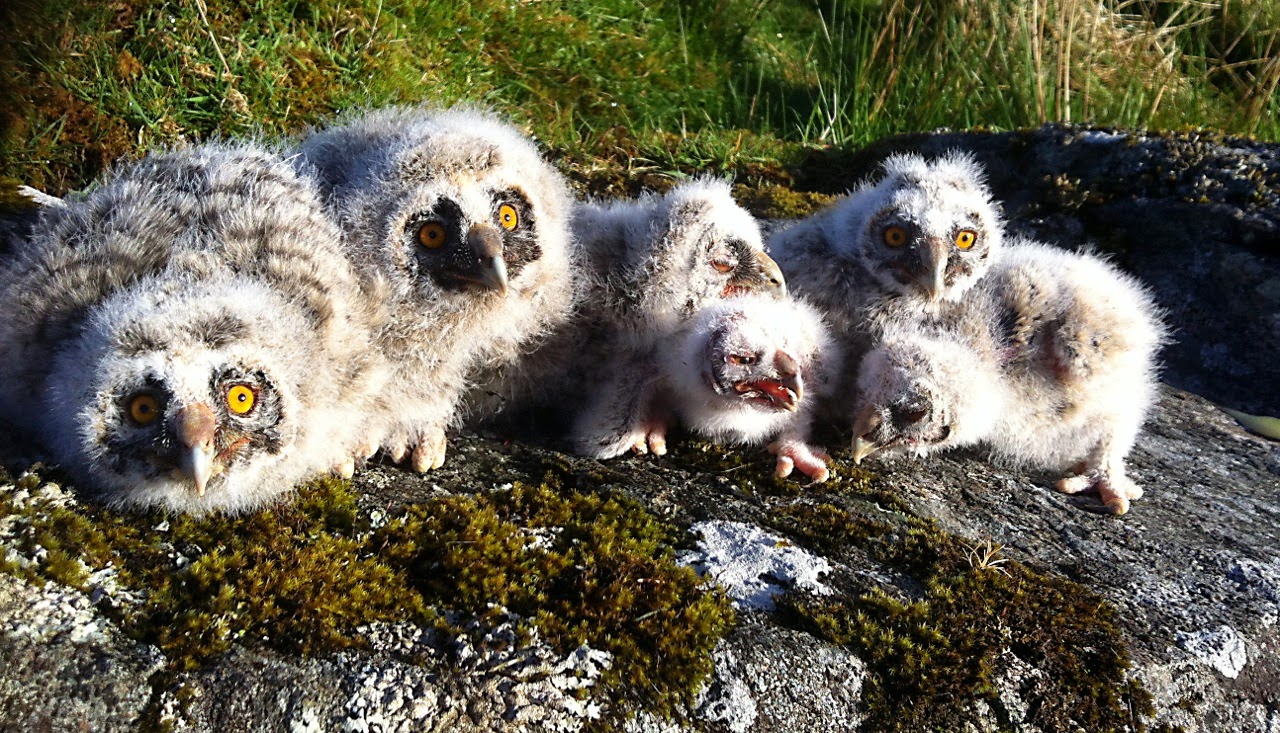 Amazingly, given the size range within the brood, all 6 chicks, were ringable. Now why don't days like this happen more often?
Posted by Tony Cross at 10:54 No comments:

Big brother in the Hawfinch wood 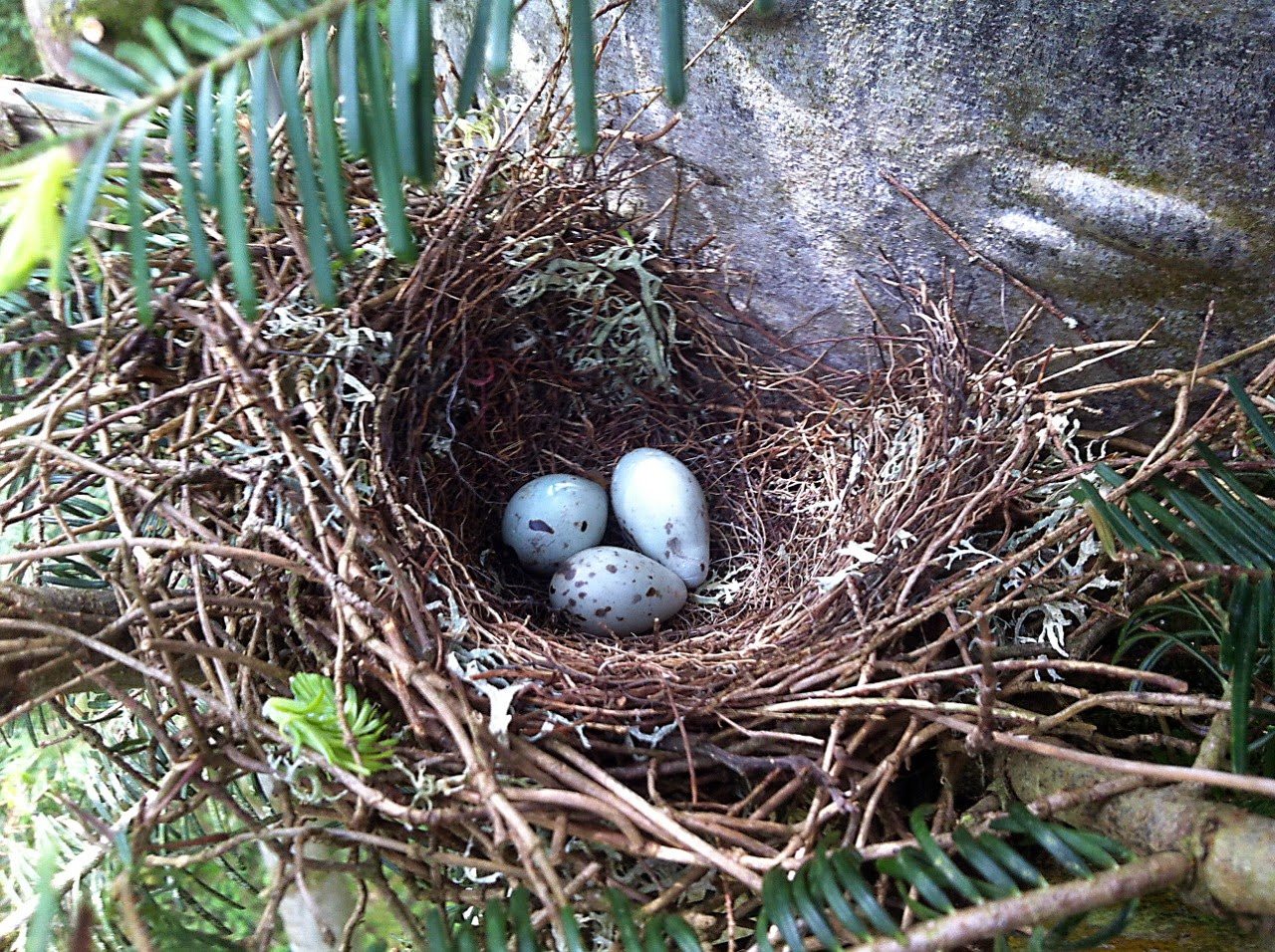 Note the weirdly shaped egg on the right.

This year's Hawfinch nesting season is well underway and we are once again attempting to install nest cameras to assist with an RSPB research project. So far Dave has managed to locate seven Hawfinch nests and I've installed cameras on three of them. We are hoping to do one of the others but the remaining two are just too high and the branches too thin for a heavyweight like myself! 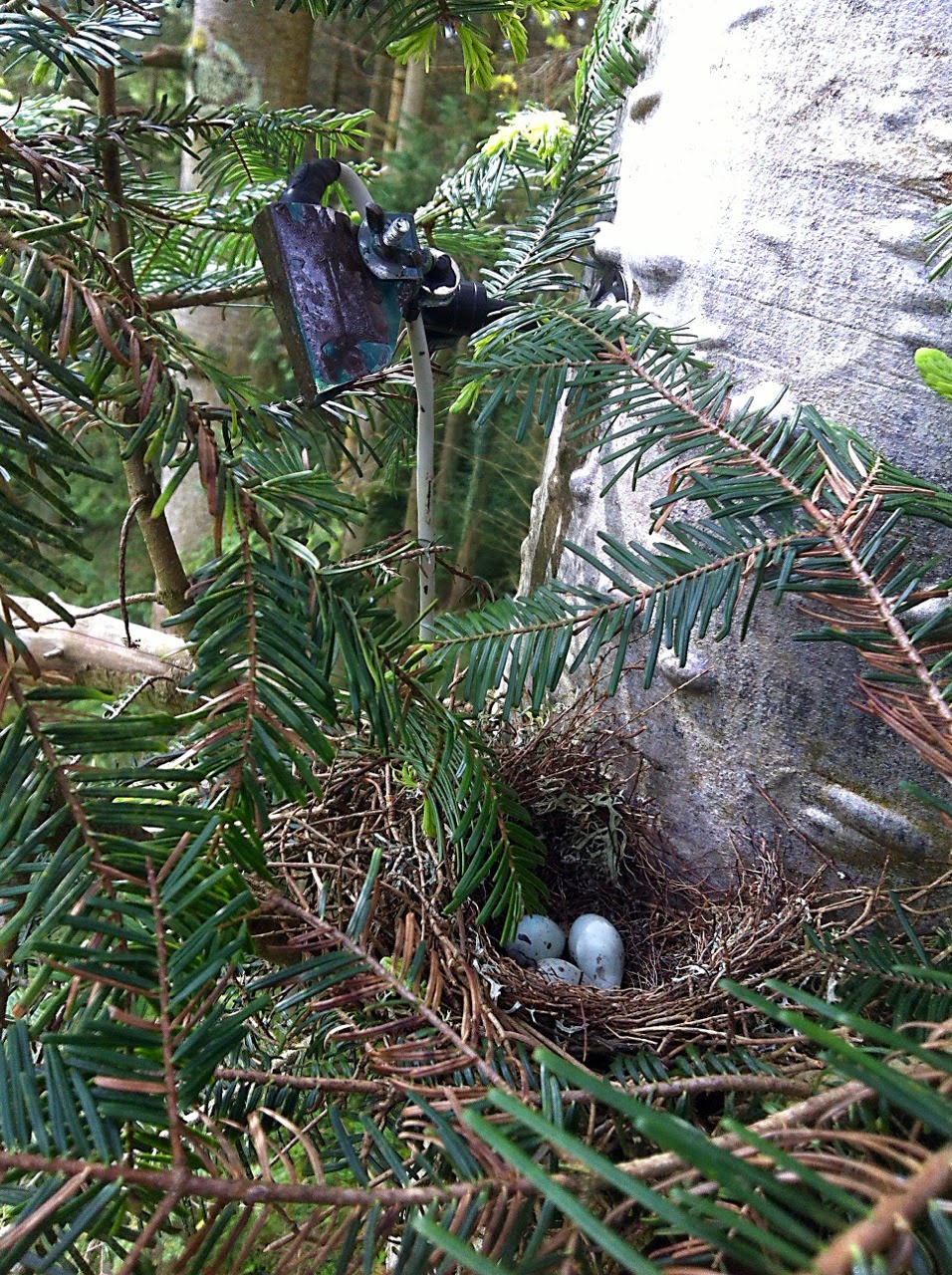 Managed to throw my iPhone 60ft out of the top of the tree just after taking this photo. It twanged alarmingly off the ladder below and shot off into the undergrowth where it took a while to find but amazingly no damage is apparent! That has to be some sort of a recommendation  (cheques payable to A. V. Cross please Apple!)

The search continues and we may yet get to use all of the nine cameras available but with every day the leaf cover increases and nest finding gets that bit trickier.

First impressions are of a very early season and I got a bit of a shock when the first nest I climbed to this morning had 4 recently hatched chicks and an egg!!
Posted by Tony Cross at 10:20 No comments:

In 2010 we started a colour-ringing project on Whimbrel passing through West Wales in the spring to try and find out more about where they were coming from, where they were going to, and if it was the same birds using the same staging post each spring.

To date we have colour-ringed over 150 Whimbrel and up until recently had received just three local resightings and a dead bird recovered in North Africa (albeit the first African Whimbrel recovery North of the Sahara). In the last few days we have received a significant boost to our results. Firstly on 21st April, John Kemp photographed a Whimbrel on South Uist in the Outer Hebrides which had been ringed on spring passage in 2013. 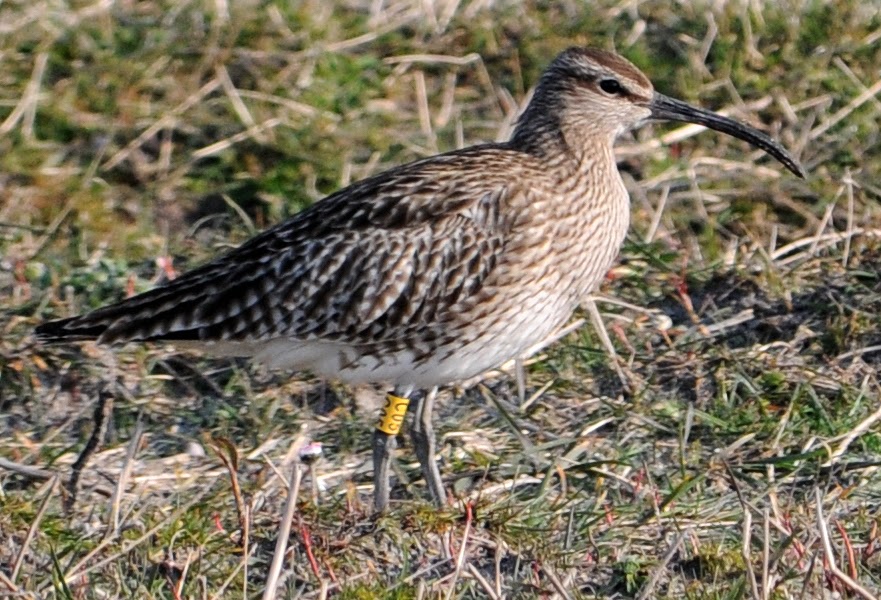 Then on 29th April, Marc Rapilliant photographed one at Pleubian, Brittany that had originally been caught on spring passage in May 2010. Whimbrel are long-lived birds so we hope that this is just the dribble before the gush! 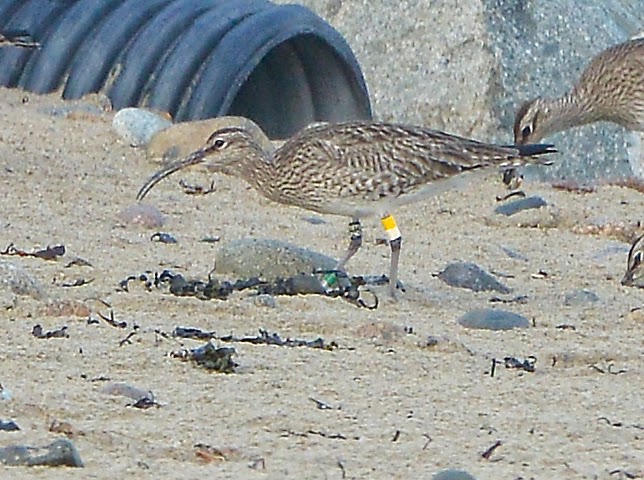 This year's spring passage has only just got underway, and signs are it may be fast and furious. I had a flock of over 100 whilst surveying Chough sites in North Wales just a couple of days ago. So far we have caught just five new birds but one of our best sites has been destroyed following repairs to the recent gale damage and another is strangely devoid of birds this year, again possible due to the effect of the storms. Hopefully things will improve over the next two weeks, our peak passage period.

Our sum total of knowledge on West Wales Whimbrel to date.
Green marker is ringing location, Blue Markers are sightings and Red marker is a dead bird recovered.