Spent the morning catching up on a bit of much-needed paperwork today but was being constantly distracted by a family party of at least six Green Woodpeckers in the field behind the house. Not able to resist the temptation for long I quickly set a net in the garden and played the Green Woodpecker tape. Within a few minutes I had caught three of the 4+ juveniles and an adult had got out of the net too. Not bad in this part of the world where Green Woodpeckers are a bit thin on the ground. 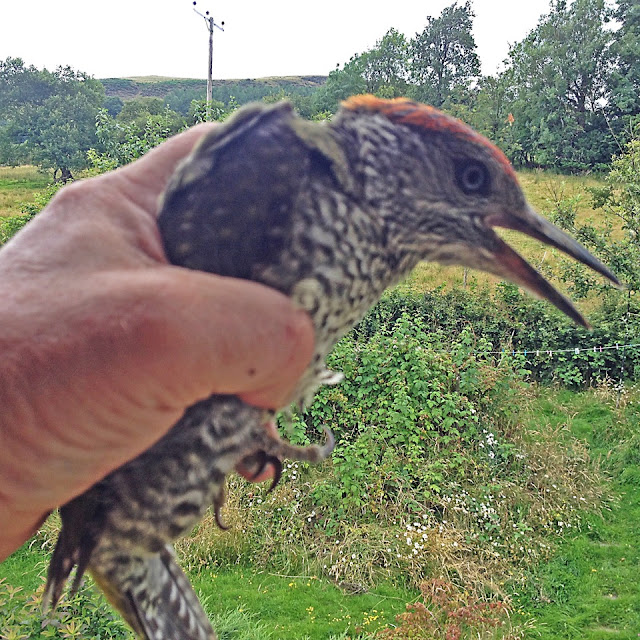 Desperately need to upgrade my iPhone, the camera on this one isn't the best!! Any special offers Apple? A juvenile Green Woodpecker, one of three caught in the garden this morning! 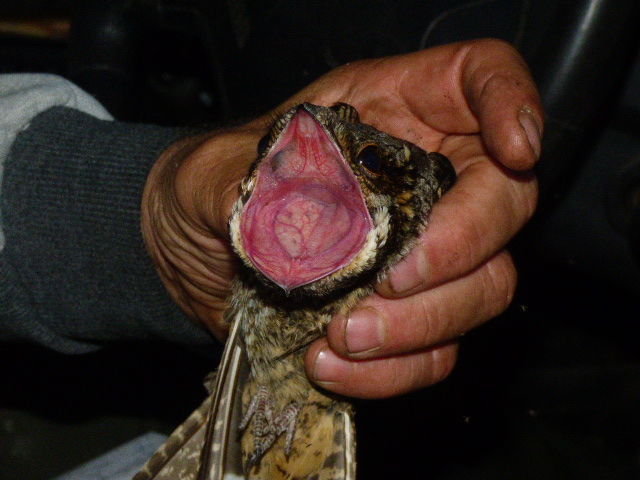 Last night after struggling with weeks of far from ideal Nightjarring weather the heat was finally turned up and what a difference it made. Lucky mascot Dan Carrington (who has not yet been on an unsuccessful Nightjar session) and I caught an amazing SEVEN different adult birds comprising 6 males and a female.  We also checked on a nest with a point of fledge chick that will hopefully get ringed later today by Mike Shewring. Five of the birds were fitted with radio-tags for subsequent tracking and they were also mouth-swabbed as part of a BTO investigation into Nightjar DNA. As you can see there's not much difficulty in persuading a Nightjar to open its mouth for swabbing. 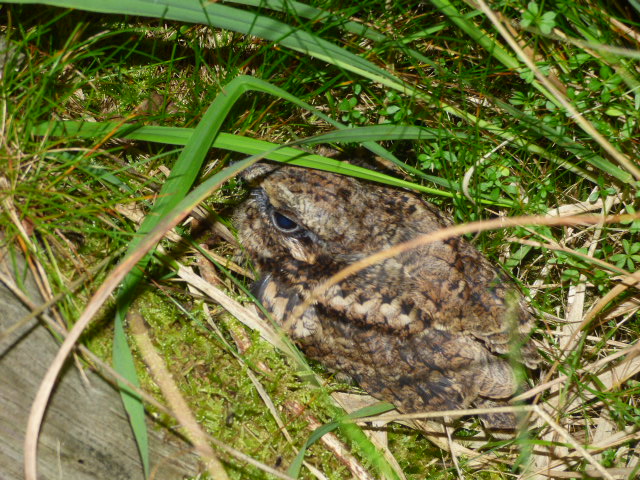 The only downside to the whole evening was that I somehow managed to let go of  the  first male we caught just after taking him out of the net so he didn't get ringed!  That  is  the  first and last time that's going to happen and a bloody good job it wasn't a trainee that did it.......!!
Posted by Tony Cross at 15:10 No comments:

I recently received an email with the photos below attached of Whimbrel D74 feeding in pasture fields at Dokkedal in Denmark on 11th July 2016. This is a great sighting and according to the BTO's online ringing reports it is only the fourth record of a BTO ringed Whimbrel in Denmark. It was originally ringed on spring passage on 30th April 2016 at Llanon, Ceredigion 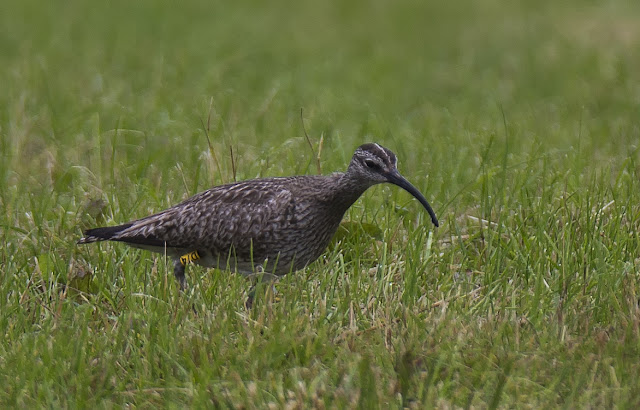 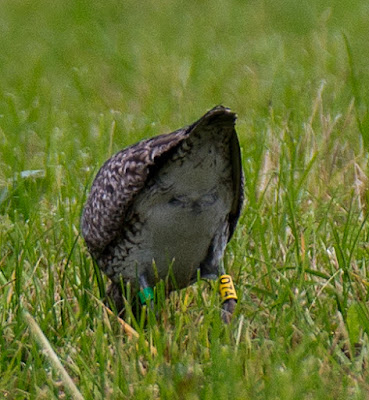 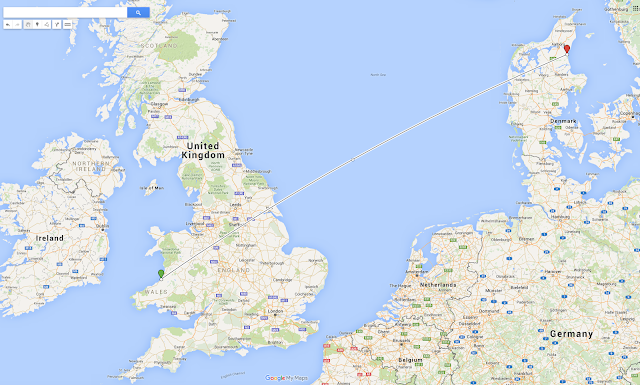 Additionally, Dolly, one of the two Curlews we satellite-tagged at Dolydd Hafren, that was confirmed nesting on the Forest of Bowland in Lancashire (map shown in the last blog post), has now crossed the Irish Sea and is hanging around the Barrow Estuary near Waterford in Southern Ireland. Sadly Fran, the other bird, has not been heard of since Mid April and I'm afraid the tag has either failed or she is no longer with us. 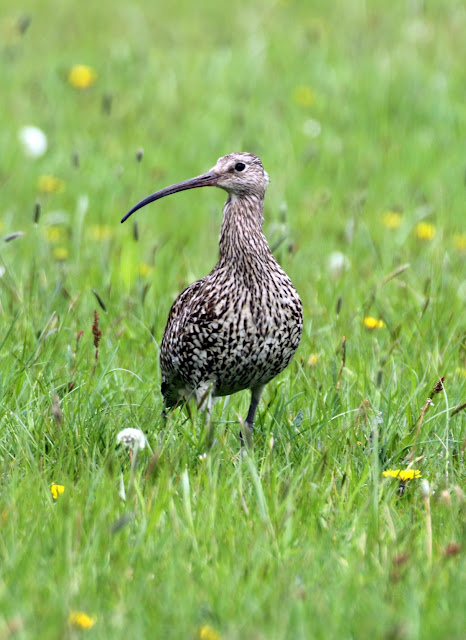 During the spring Amanda Perkins, David Tompkins and I have been out talking to farmers and scouring the hills and fields of the Shropshire/Powys border looking for breeding Curlews as part of a 3 year HLF funded project run by the Stiperstones and Corndon Hill Landscape Partnership Scheme.

Building on last year and assisted by an army of volunteer Curlew surveyors from the local Community Wildlife Groups, co-ordinated by Leo Smith, we managed to locate approximately 40 pairs of territorial Curlews. This information then helped guide us to find a total of 21 nests, almost twice as many as in 2015. 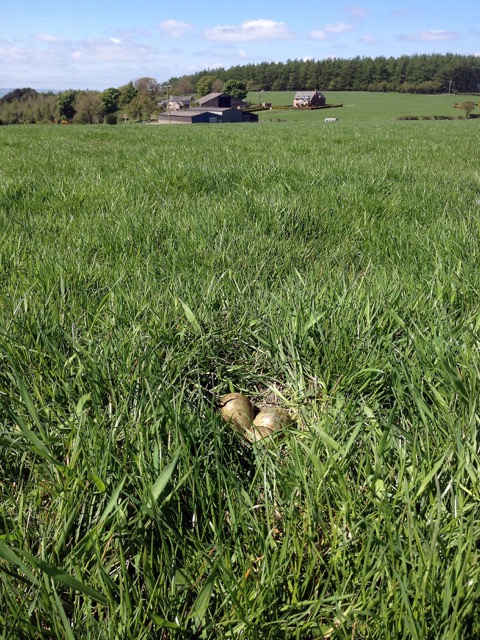 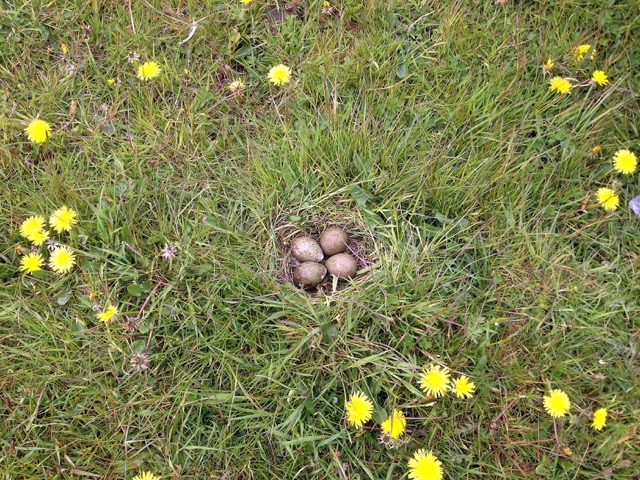 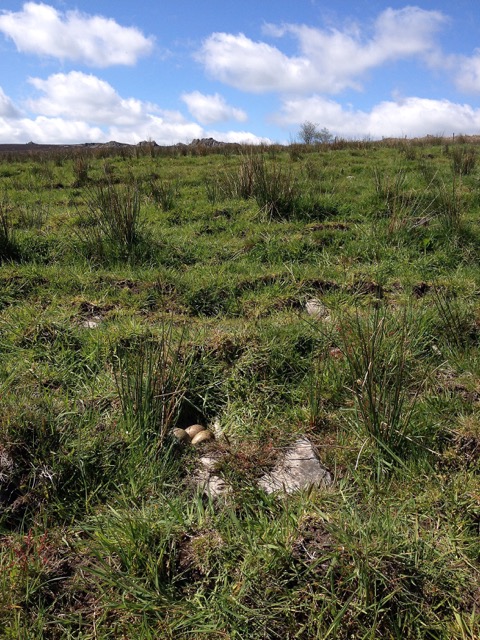 Most of these nests had surveillance cameras installed in an attempt to find out what was causing the nests to fail. Of the 21 nests located just three hatched a total of seven chicks and all seven chicks were known (or assumed) to be dead after less than a week. All seven chicks were fitted with small radio-tags whilst still in the nest. Two tags were recovered from under obvious perches indicating avian predation, one was recovered from under a hedge along with the metal leg-ring suggesting mammalian predation and one was the unfortunate victim of agricultural activity. Of the 18 failures at egg stage at least eight were due to foxes and at least three were due to badgers. One nest was trampled by sheep, another was trampled by cows and one nest was deserted, possible due to low and prolonged helicopter activity. The cause of failure at the remaining nests was not ascertained.

It is telling that at all three of the nests that hatched chicks we had installed electric fences, one from early on and two in the second half of incubation. It is our intention to fence far more nests next year in an attempt to increase the number of nests that progress to hatching. 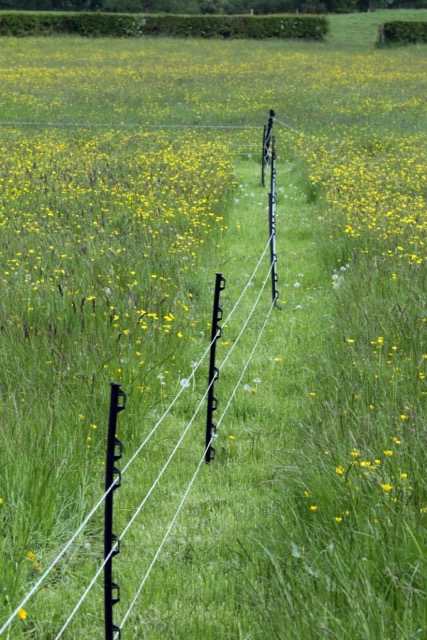 It was a real ray of light in an otherwise frustrating and gloomy season that the farmers involved were so willing to engage with us in our attempts to monitor nests and to do what they could to help the Curlews succeed and our sincere thanks go to all of them. 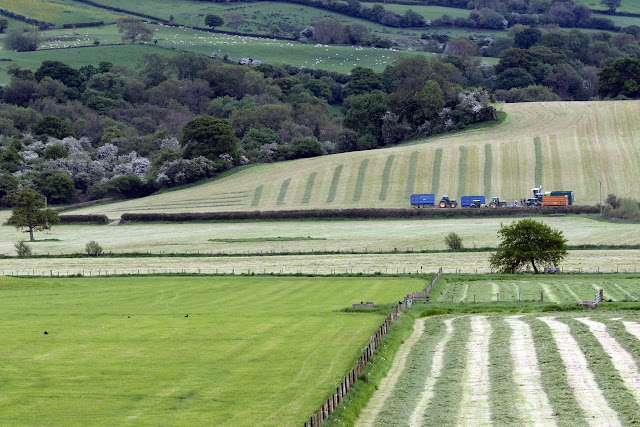 Thanks to the agreement of the farmer the small area of un-cut grass in the middle of the field below the tractors held a Curlew nest that successfully hatched two chicks, although unfortunately both were subsequently predated.

To end on a slightly more positive note. During the spring another 40 odd Curlews were colour-ringed at the Montgomeryshire Wildlife Trust's Dolydd Hafren reserve. This brings the total ringed there in the last two years to 62. No fewer than eight of these birds were identified at local breeding sites, a brilliant result and something we hope to improve on in coming years. Two other Curlews, satellite tagged at Dolydd Hafren in March, were also tracked to breeding sites, one near Hay-on-Wye and the other on the Forest of Bowland! 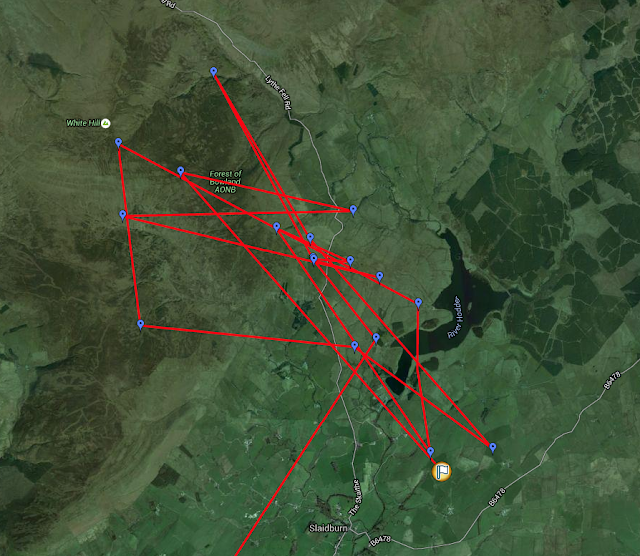 It is very pleasing that we still have a Curlew population locally, albeit very reduced, but if these breeding results are widespread, and there is absolutely no reason to suggest otherwise, then we may not have them for much longer. Curlews, being so long-lived, naturally have a low reproductive rate but they still need to get some young away each year!!

If you'd like to help please click here to donate to our Curlew appeal
Posted by Tony Cross at 15:44 4 comments: 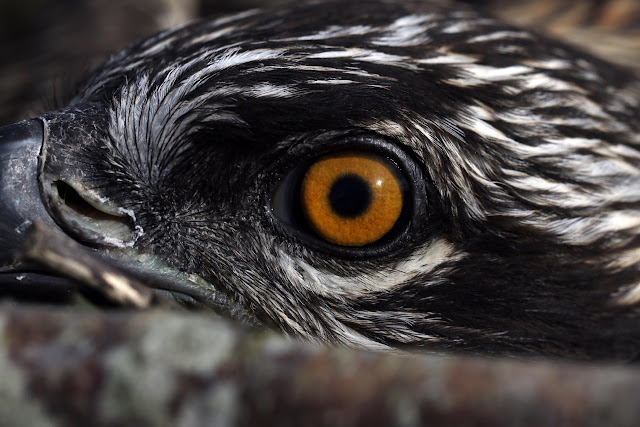 Well we have just seen the end of Flaming June, or flaming June as I'd prefer to call it! Generally the weather has been dire and not very helpful at all. None-the-less a great deal of ringing has been going on over the past two months and when we get a minute we will update you with a few blog posts. In the meantime here is one that has been expertly crafted by Emyr at the Dyfi Osprey Project to show one of our last ringing events of June, no similar hanging around by those guys!