Myself and Char (a first time dazzling for her) took a trip up to the Ridge-Way this evening to see what birds were about feeding in the fields. On arriving I wondered if we had made the wrong choice as the mist was very thick and the wind was very strong (at times Char was struggling to stand up!!). But in true fashion we soldiered on! It was a very steady start only catching 1 snipe and 1 lapwing in the first hour! But then we struck a bit of luck, with some of the birds finally deciding to sit! We managed to finished off with a total of 9 birds - 3 (+1) golden plovers, 3 lapwing, 1 snipe and the last bird to be caught (another!!) jack snipe!!

Not bad for a first catch!! 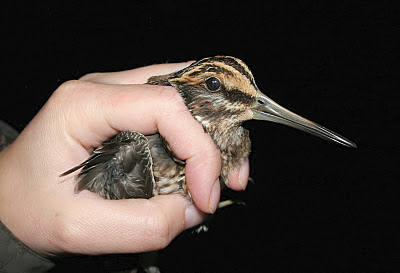 Last night myself and Tony met up on the Ceri Ridgeway to make the most of the dark evening. Another good catch was had with the highlight being 2 Jack Snipe! Other birds caught included 10 Golden Plovers, 1 Lapwing, 1 Snipe, 1 Fieldfare and another Stock Dove!! 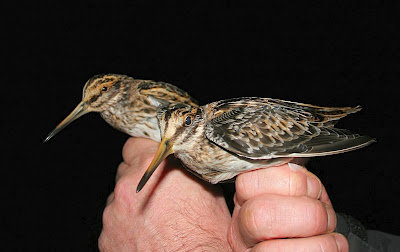 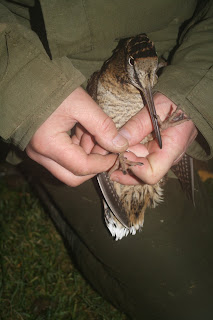 Last night Terence Lambert took an hour to walk a local hillside neat Llanbrynmar to see if there were a few woodcock to ring. This is an unusual woodcock site being pretty steep faced rather than the normal hill top location. The first bird he caught was already ringed (EP94287) This woodcock was ringed by myself whilst being trained by Tony Cross on his Crychan site near Llanwrtyd Wells on 9/3/08. It was an adult bird when ringed making it at least 5 years old, our longest lived retrap so far!
Posted by owen williams at 08:25 1 comment: Andrew Hoodless and I spent a few hours woodcock ringing near to Lledrod on 18th Nov. the second of the 5 birds we caught that night was already ringed. It was with great excitement that I discovered that was not one of my rings. On making a few phone calls the next morning I discovered that it had been ringed by Arfon Williams near to Llanrhystud three nights earlier and that he retrapped it the following night on the same field. It seem that this juv having arrived on the coast took fright at the Irish Sea and decided to have a think about it on dry land. The route from Llanrhystud to Lledrod takes in the Wyre Valley, perfect habitat for daytime roosting and night time feeding.
Posted by owen williams at 08:38 No comments: 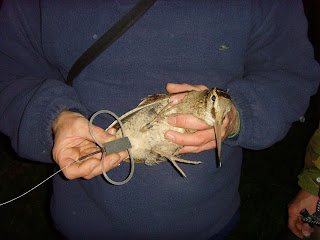 Last Thursday Dr Andrew Hoodless, the UK woodcock expert came to Llanilar to train members of the Woodcock Network on how to fit geolocators. Paddy Jenks, Wendy James, Richard Dobbins and Mike Sherman, came up for the night to see how it was done. It was amazing how we all use different nets, I was amazed that Richard and Wendy have managed so well using just a 2 mtr pole....respect!!!!
The night was a great success with 11 woodcock caught and everyone had a good chance to try fitting a radio tag, a substitute for the geolocator as we are waiting for the geolocators to come from the manufacturers. The design of these, a leg loop harness, are the same as for the geolocators so it was good practice for removing then too.
Posted by owen williams at 08:22 No comments:

Email ThisBlogThis!Share to TwitterShare to FacebookShare to Pinterest
Labels: Woodcock Geolocators and Ringing

More Woodcock and a Nightjar control!!

Having finally sorted computer problems and caught up a bit on overdue jobs I actually managed to get out and do a bit of ringing again this weekend (first time in over a fortnight, almost unheard of!!).  Four Woodcock caught at Crychan on Friday night and another seven tonight near Bwlch-y-Sarnau. As Owen posted earlier most of them were first-year birds so it looks like they had a good breeding season on the continent.

Latest batch of recoveries from BTO included a Bangor Little Egret ringed on 5th June and sighted on Hilbre Island on 17th September.

....and the first ever control by another ringer of one of our Nightjars. A juvenile ringed on 26th July 2010 near Resolven, Neath was controlled as an adult female by Alan Lowe on 29th June 2011 at Ynyshir, Rhondda Cynon Taff,  25 km from where it was reared.  Not bad but one from sub-Saharan Africa would have been OK too! 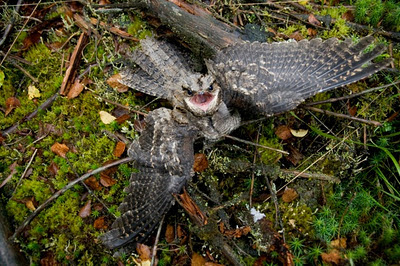 Only 3 birds caught this evening, thankfully they came in the shape of 2 Woodcock and this very smart Jack Snipe!! 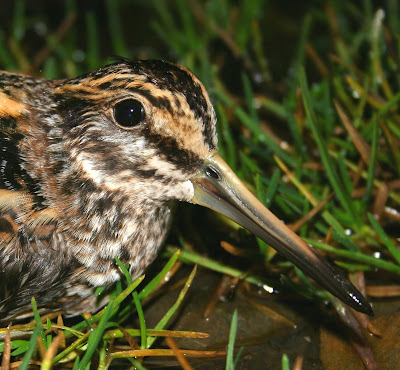 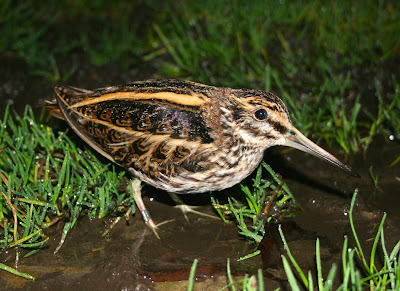 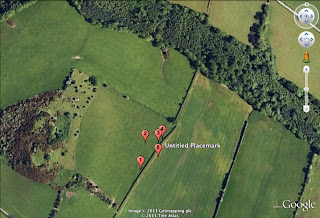 Frustrated by a full moon, I decided to get out early to catch before moonrise at 20.15. Counted 30 but only caught 5 as they were very jumpy. A lot of the birds I saw were in odd places in small groups near to hedges and sheltering out of the wind. It left me wondering if these were migrant flocks unfamiliar with the area. 4 of the 5 were juveniles.
Posted by owen williams at 08:34 No comments:

A steady start to the month!!

With the moon not being very helpful at the moment (other than bringing new birds in), catching has been very few and far between! 3 'visits' to my north monts site have produced only 4 catches - 2 Golden Plovers, 1 Fieldfare and 1 Skylark. Ironically the Skylark was a re-trapped bird that I ringed in the same place 5 weeks ago! What's it still doing there??

Roll on the new moon.
Posted by Paul Leafe at 22:30 No comments: 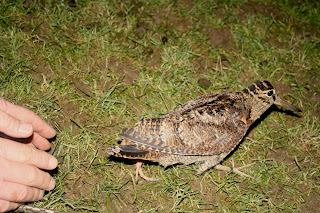 After my last visit to my ringing site on Sunday when I saw only one woodcock I was sure of only one thing... that I would get wet. However my efforts were rewarded with 14 woodcock seen and 9 ringed..... 8 of these were juveniles.

With a moon and calmer weather forecast from the weekend onwards we should see a lot more woodcock arriving soon.
Posted by owen williams at 23:07 No comments:

Generally when you think of going dazzling on the hills, you think about starting mid to late November (usually when the majority of wintering Woodcock are in). But this year myself and Tony decided to give October a try, mainly targeting Golden Plover as not many of these get ringed in Britain!! It started off very slowly, just getting the odd Pipit or Skylark on each 'session', but by the time the full moon was here, birds were dropping in, even Woodcock!! With the moon disappearing for the last week and a half we put in a big effort to try and be out every night mainly concentrating on 2 known 'stop-off sites' for the Plovers as they will not hang around up there for long! Our efforts payed off!

Catches were as follows: 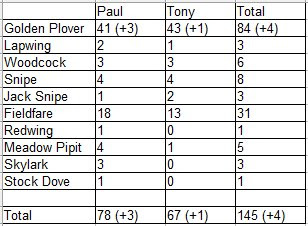 Hopefully now with a good number of Golden Plovers ringed, as they start to head to the coast for winter, the odd bird will get recovered and help us understand more about who goes where, and maybe why?? 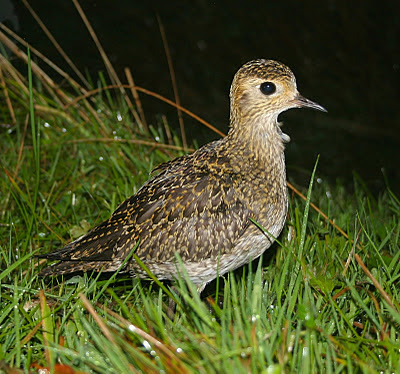