We've recently received another exciting Jack Snipe recovery, this time from RUSSIA!! Unfortunately this one was also found dead, most likely shot but it was found in 'poor condition' so weather could have played a factor?! It certainly seems that Russia is a popular breeding ground for the like of our over wintering Woodcock and Jack Snipe, but getting back and forth to there definitely throws up many obstacles as all of our Russian woodcock recoveries and now this Jack Snipe have all been dead!

With very little known about Jack Snipe migration movement and migrations routes/patterns, this little bit of information could prove to be very valuable as only 1 of 19 British ringed Jack Snipe have been recovered abroad and only the 2nd in Russia.

Hopefully this recovery and the French one earlier in the year as the start of things to come, as we've gone from catching 30 new Jack Snipe back in 2013 to a massive 104 new birds in 2016. This increase has come around from spending a lot more time in the field and finely tweaking our catching skills. As well as all of the news birds, we also re trap 20-30 individuals each year (a mixture of birds from the current years, plus re traps from previous winters) so we may look at starting to fit the with data loggers, but before that we need to find a pot of money. Given some of the stuff we do find in sheep fields at night time, you never know!! 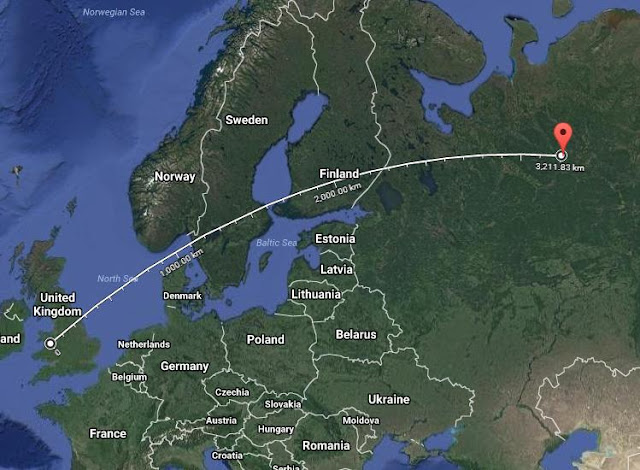 (map showing distance between the ringing and recovery locations)
Posted by Paul Leafe at 14:50 1 comment: