The search for gold begins...

Last night Silvia and I headed up to one of our dazzling sites in Montgomeryshire. With it being one of our furthest sites from home it's always a worry that you might come back empty handed, so going up early in the season was a bit of a gamble. After scan around the first field, there wasn't a lot to be seen. This was no doubt because of the time of year and the fact that the grass was quite long. Despite this we were happy to catch a Snipe and 2 Skylarks, which now made the journey up there worth while. Before heading back we checked another field which looked a lot better straight away. It had recently been topped, which the plovers seem to favour. After lots of Snipe and a couple of Lapwing getting up from long distance I was beginning to think that catching anything else was off the cards. Thankfully that changed when a Lapwing decided to drop back to the ground. Soon after catching it another Snipe was caught. Happy with that I headed back to the car, when a familiar shape appeared in the beam. A very quiet tiptoe walk which seemed to take forever was rewarded with our first Golden Plover of the season. 6 birds dazzled any night is good, let alone mid September! Lets hope it continues. 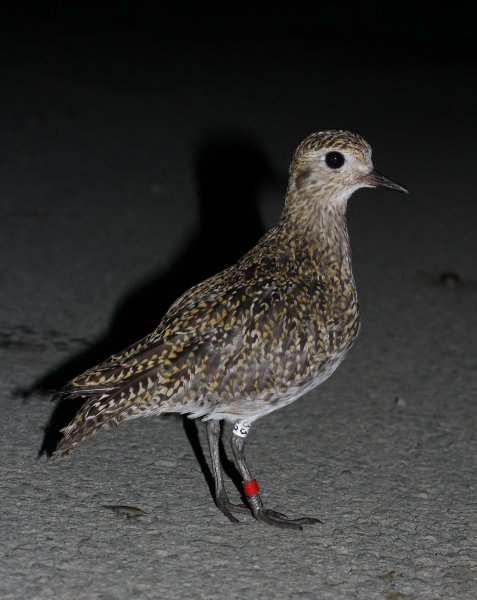 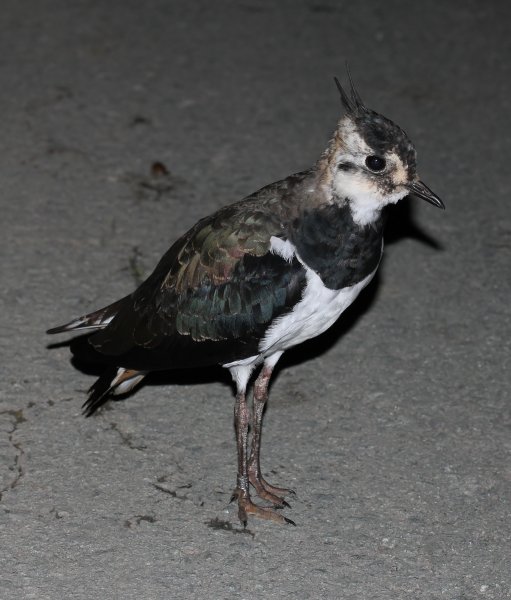 The last 3 nights have seen some good tides for ringing waders and terns and thankfully the weather was kind too, with the wind finally easing to allow mist-netting at Ynyslas on two of the three night-time high tides. The numbers of birds present were not as high as a fortnight ago with many of the terns and waders having already moved through but with the improved weather, Paul, Silvia, Jane and I did manage to colour-ring 13 more Sandwich Terns bringing the total colour-ringed this year to 41 (39 new birds, 1 re-trap and 1 control). 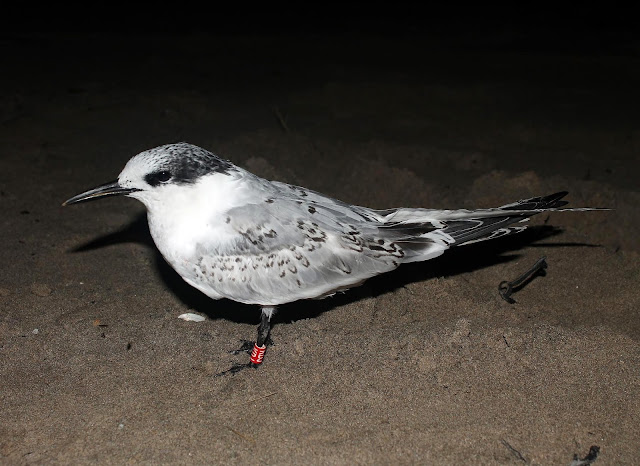 Juvenile Sandwich Tern. Amazingly past ringing returns have shown that some of these birds have come to Ynyslas from the Farne Islands, crossing overland in doing so and whilst still being fed by the adults!

The handful of Sandwich Terns we have managed to colour-ring in the past two years have already provided a good number of resightings (in Devon, North Wales and Northumberland) so this should be a real boost to the project. Last night we caught our only Common Tern of the year too. This is far from a “common” species for us but this year has been a particularly poor one for “smaller “ terns hanging about in the estuary. 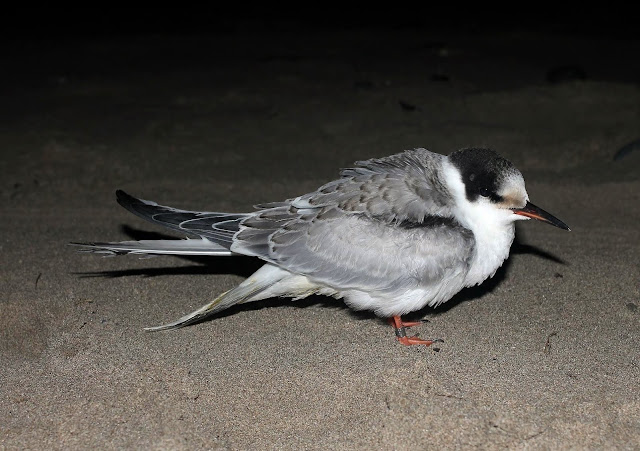 The outstanding feature of these recent catches though were the 21 Knot ringed. The Dyfi is not a particularly important estuary for Knot and most that turn up are brief stayers enroute to elsewhere. All of the 31 Knot ringed so far this autumn have been juveniles and represent the largest number of Knot caught in a single year since I started ringing on the Dyfi back in 1982! 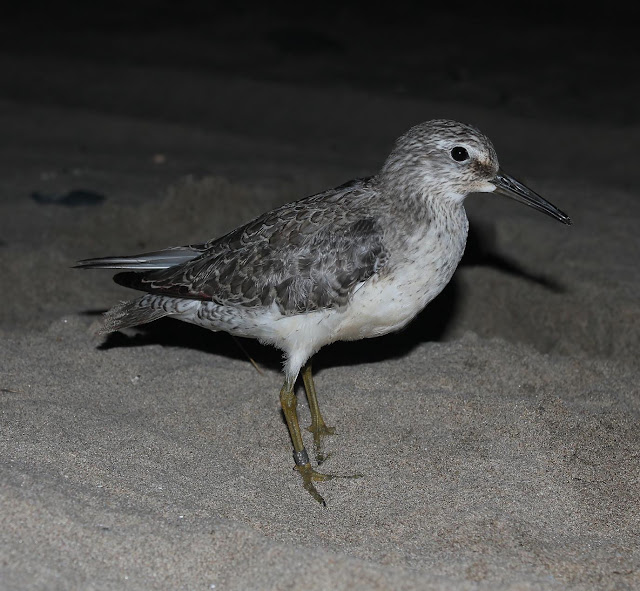 A juvenile Knot, clearly identifiable by the subterminal black bands on the wing coverts

To put things into context, excluding this year, only 94 Knot have been ringed here previously. In contrast nearly 3,000 Dunlin have been ringed in the same time period so the 85 caught this set of tides is a fairly normal showing.

A nice addition to last nights catch was a Liitle Stint, our first since 2012 and only our 20th ever. Last year, surprisingly, there we no Little Stints ringed anywhere in Britain! 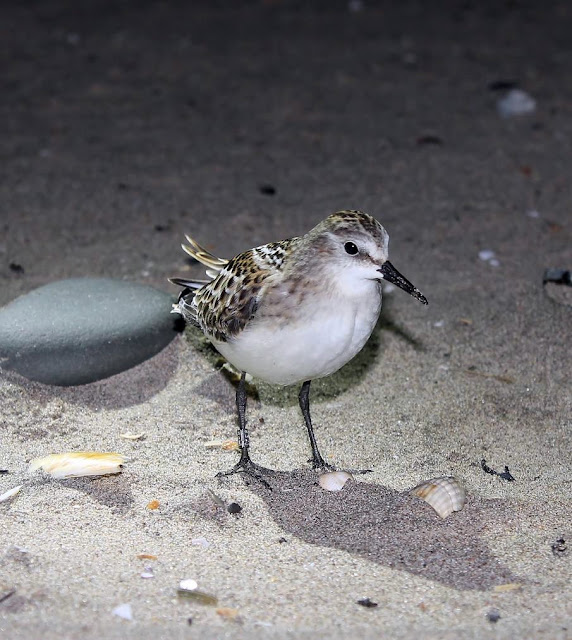 Other birds ringed in the past few nights included 7 Ringed Plover, 5 Turnstone, 2 Redshank, 1 Curlew and 10 Oystercatchers, one of which was a partial albino! 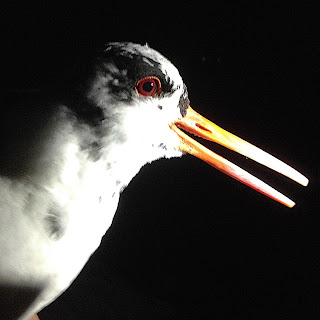 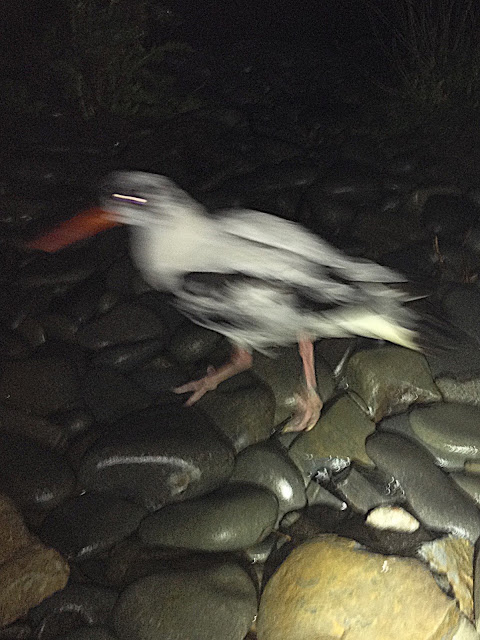 Thanks to Paul for the photos (well apart from the ones of the albino Oystercatcher,  I take full credit for them !!)

After spending 11 weeks in Romania seeing and ringing some great species of bird, I can happily say that I'm pleased to be back home. The winds have been quite calm, which has allowed Silvia and myself to get out and do some mist netting at a couple of our regular sites. The first site we tried was a pine forest where we've had good catches of small passerines during late summer/early autumn in previous years. The forest was very quite and we only managed 30  or so birds. The next few days we tried some mixed willow scrub/conifer re-growth. This was definitely where all of the birds were hanging out. Over the space of 3 days and only about 10 hours netting we managed to trap and ring over 220 birds. Highlights over the 4 days netting were easily Firecrest and Redstart. 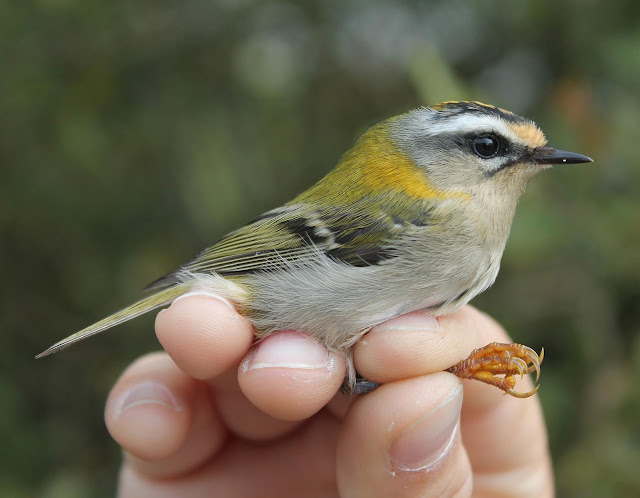 Firecrest (hopefully not the only one for this year!) 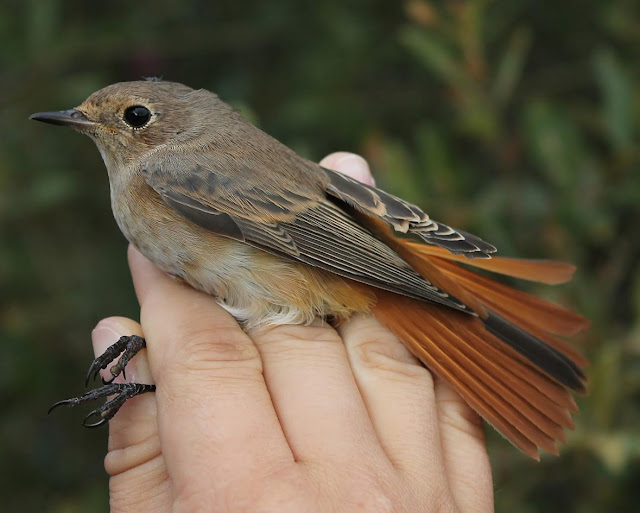 Total number of birds netted in the 4 days!

As well as netting we've also headed out on to the hills dazzling, to see what birds are 'in'. Despite (understandably) very few birds, we've still managed to catch 7 Common Snipe, 6(+1) Skylark, 1 Meadow Pipit and 2 Tawny Owl. Not bad for mid September, roll on the autumn! 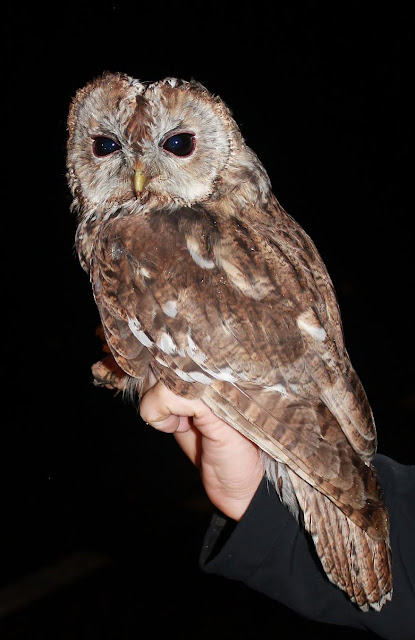 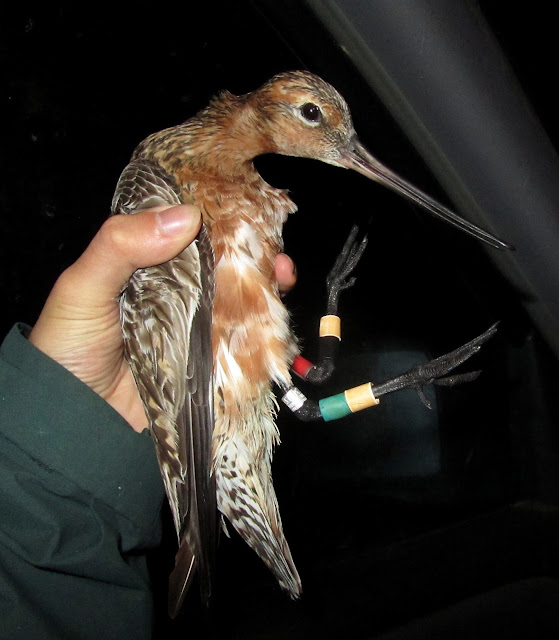 I recently re-submitted details of this Dutch-ringed Bar-tailed Godwit that we controlled at Llanrhystud on 11th May 2014. I have just received the original ringing details from the BTO and it was first caught on 25th May 1994 at Zwinweg, Texel, The Netherlands. 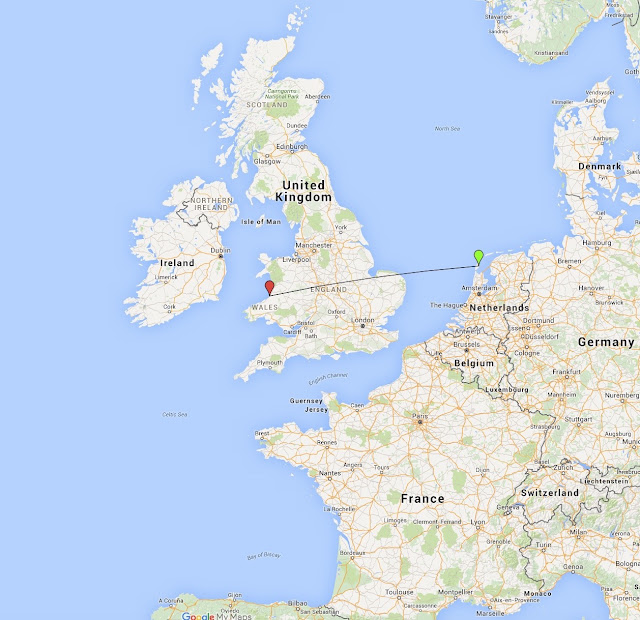 The recovery report shows an elapsed time of 7,291 days and a distance travelled of 617 kms. Whilst the elapsed time is impressive enough how much more impressive would the distance travelled be if we knew how far this bird had actually travelled in the last 20 years? I will be trying to contact the Dutch ringers to see what previous sightings there are of it - someone else must surely have reported it in all that time !

The oldest ringed Bar-tailed Godwit reported through BTO ringing was an amazing 31 years and 4 months between ringing and recovery so by comparison this one hadn't even reached retirement age!
Posted by Tony Cross at 17:03 No comments:

Seeking Sandwiches but Dunlin prove to be the bread and butter

Over the last 3 nights there has been a set of perfect autumn tides for netting terns and waders at Ynyslas. At this site, for a successful catch, the high tides need to coincide with a good passages of birds, calm weather and a new moon or thick cloud. You also need to put the nets in just the right location! 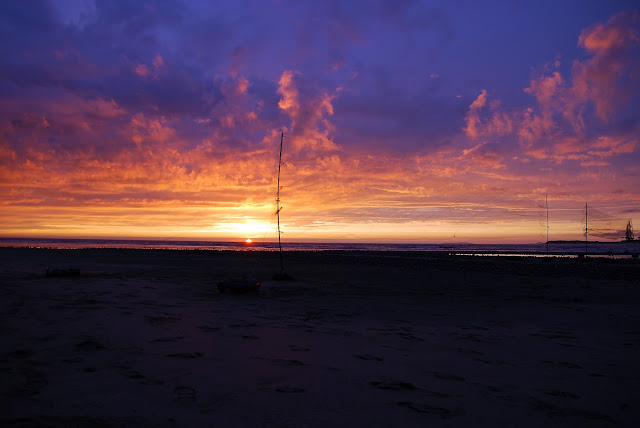 Looking good so far - nets sets at Ynyslas for tern and wader ringing.

Rarely do all of these things combine to give perfect conditions. On Saturday night the tide was a bit too early so it wasn't quite dark enough as the birds gathered and they could see the nets. Then the good folk of Aberdyfi decided to celebrate the Bank Holiday with a big firework display on the beach right on high tide which sent everything scarpering (including my dog!!!).  On Sunday night everything was near perfect.......that is until the good folk of Borth sought a fireworks rematch and tried to outdo Aberdyfi's previous night's exploits!!! Result, more scarpering birds (although at least I'd left the dog at home this time!).  Monday night was noticeably less fireworky but just a few Beaufort scales in excess of ideal and the billowing, whistling, nets proved too noticeable in the bright moonlight. This all sounds like a catalogue of excuses for not catching anything but, despite things being far from perfect, Sunday night in particular was very successful. Relative new boy Jacques and his girlfriend Bethan along with Jane and I had a catch of 94 birds which kept us busy enough! If they had all been Sandwich Terns it would have been amazing and a massive boost to our small colour-ringing scheme but as it turned out only 4 of them were. 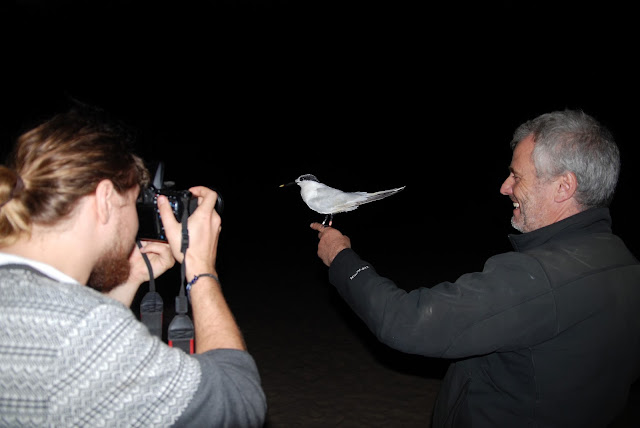 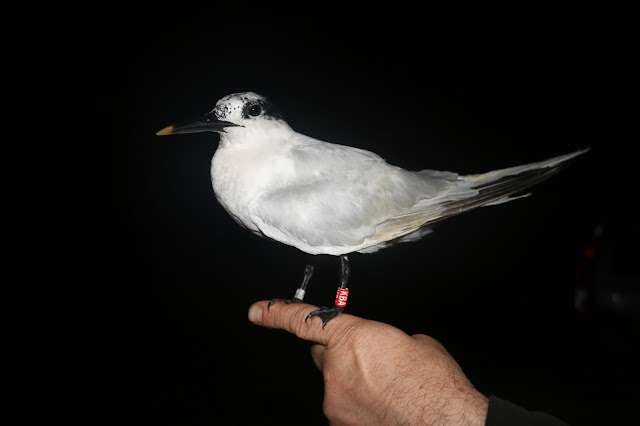 This Sandwich Tern was originally ringed at Ynyslas on passage on 4th August 2011 and hasn't been recorded anywhere else since. This time it got a colour-ring so we are looking forward to more records of it in the future!

The bulk of the catch, as is usually the case though at Ynyslas, were Dunlin.

The total of new birds caught over the three nights was 137 Dunlin, 5 Ringed Plover, 5 Turnstone, 5 Sandwich Tern, 3 Sanderling, 2 Knot and an Oystercatcher. Not too bad given the moon, wind and fireworks but so much less than it could have been with just a little more luck on our side!
Posted by Tony Cross at 13:03 3 comments: