Over the past month or so Adrienne Stratford and I, with help from numerous others, have been out and about all around the coasts, mountains, quarries and cliffs of Mid and North Wales colour-ringing nestling Choughs at well over 50% of all known nest sites. I also colour-ringed all 16 young reared in the five known Cornish nests. With just one site on Anglesey left to go back to I thought it was worth giving a very brief blog update. 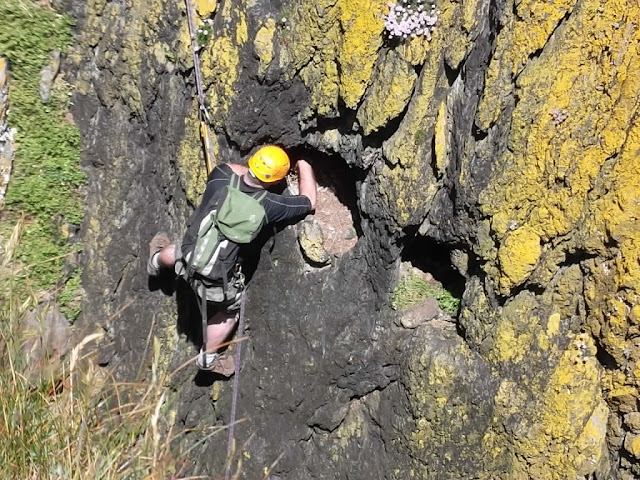 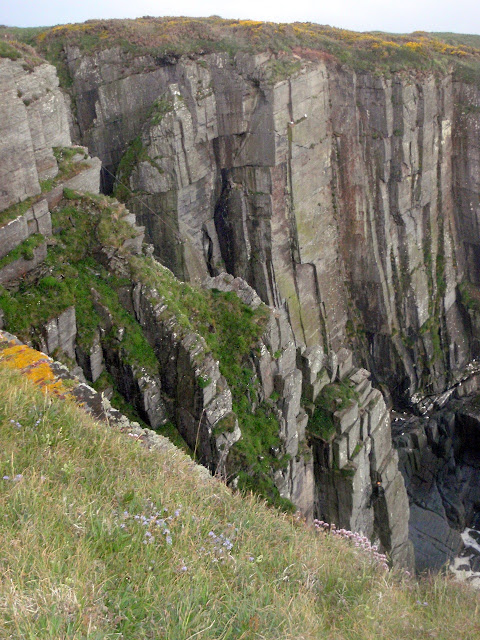 Chough's nest is bottom right - you can just see the orange hard-hat! 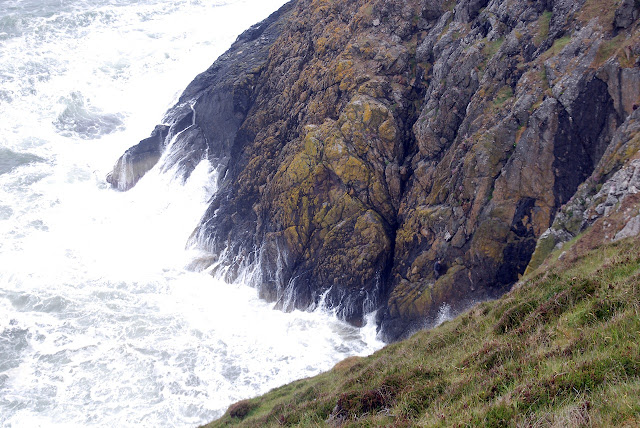 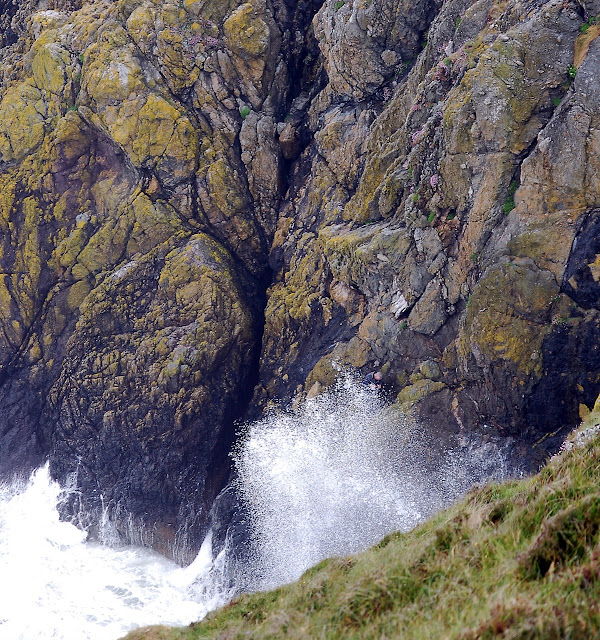 Now you see me, now you don't.  In a mountainous sea, accessing one low site was a bit more exciting (and much wetter) than usual. thankfully the chicks were all nice and dry in the back of the small cave. The photos don't really do it justice!!

2013 will stand out as an exceptionally late year, with nests being started about three weeks later than normal on average. Success rates and productivity have been fairly good though and something over 200 nestling Choughs have been individually colour-ringed as part of the Cross & Stratford Welsh Chough Project. This projects has been running since 1991 and has now individually colour-marked over 4,000 Choughs in order to examine natal dispersal, survival rates and seasonal movements amongst other things. The land-mark of 100 Choughs colour-ringed in Cornwall was also reached, which is absolutely amazing considering they virtually all originate ultimately from the one pioneering pair. 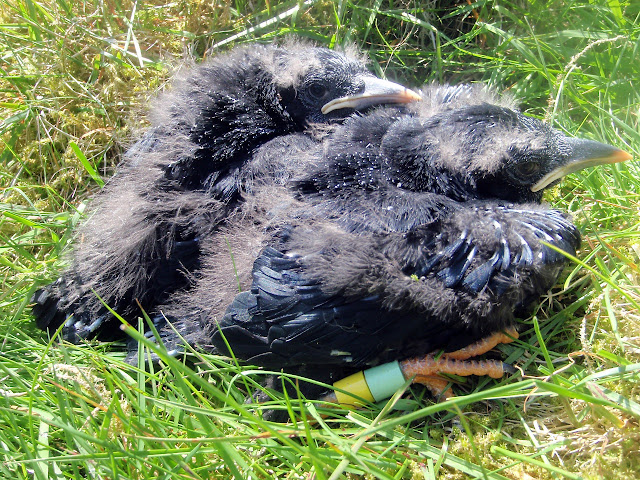 Well over 50% of all breeding adult Choughs in Mid and North Wales are now individually recognisable and great efforts have been made (primarily by Adrienne) to confirm the identity of marked birds at all nest sites not just those that are accessible for ringing. Over 150 breeding adults have been positively id'd at nest sites so far this year including three 18-year old individuals. 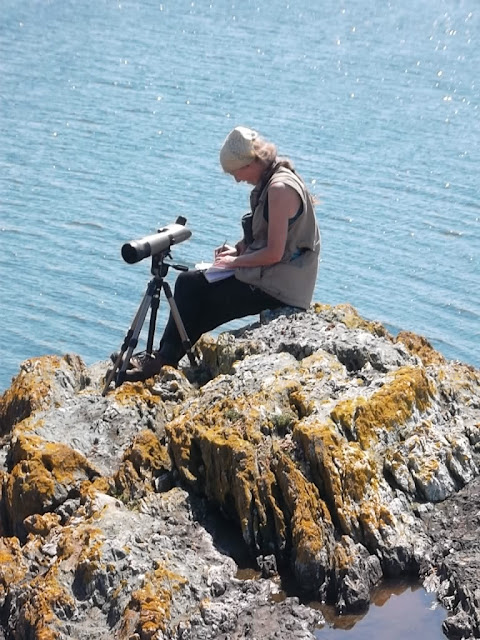 Adrienne confirming the id of the current "Mr "and "Mrs" of a site on Anglesey
Posted by Tony Cross at 19:01 No comments:

Although we went to Mull specifically to help out with the Golden Eagles, it was nice to have some spare time up there to try and find (and then ring) some wader pulli. As is often the case, the car proved to be a very good mobile bird hide. In total, we manged to catch and ring 25 (+ 1 adult) Common Sandpipers, 6 Lapwings and 2 Oystercatchers (we did catch 3 more but they were too small). 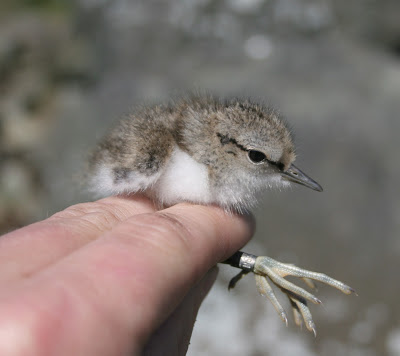 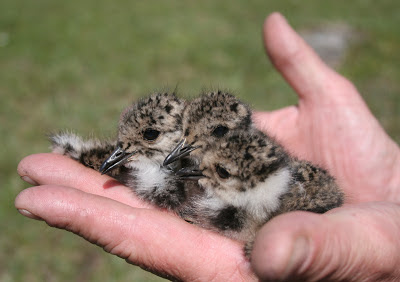 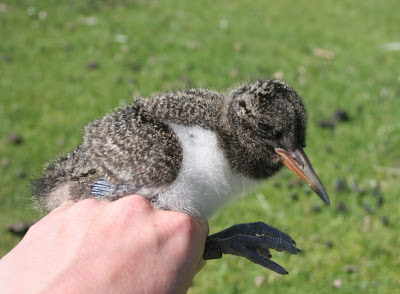 We also managed to find and ring 7 Common Gull chicks! 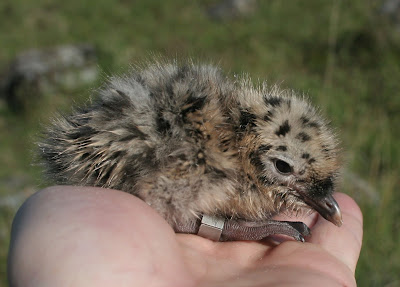 Paul and I have just returned from a 3-day mad rush up to Mull to help a mate of mine, Derek Hayward, ring Golden Eagle chicks. In two days we visited six eagle nests, four of which were occupied, and ringed 5 chicks. 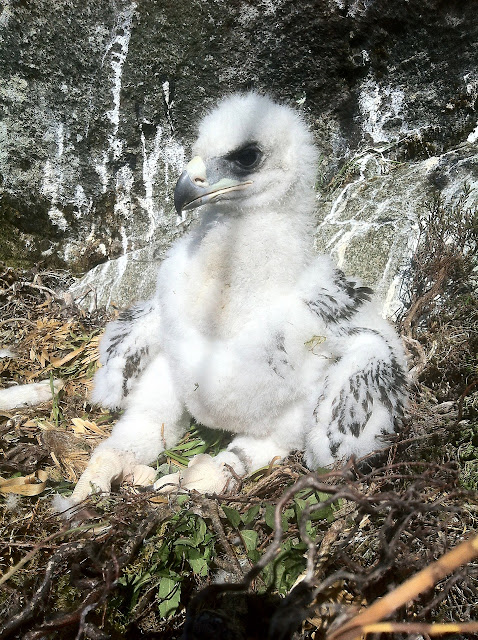 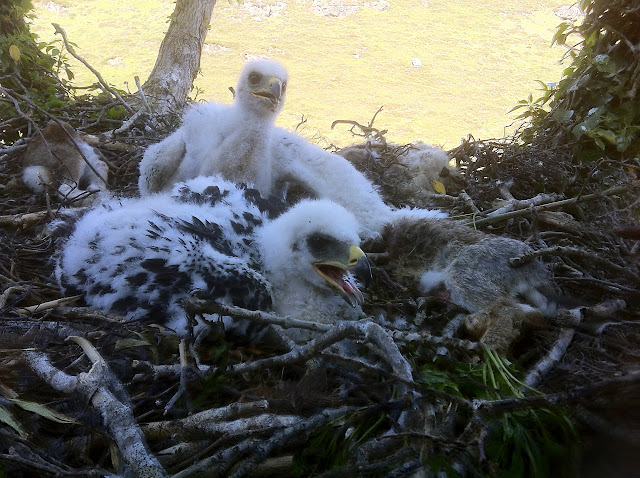 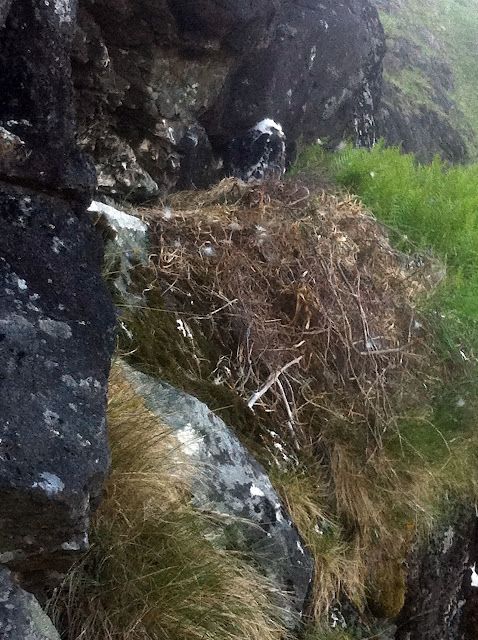 What an amazing experience and great privilege, many thanks indeed Derek. Think we need to find Eddy, the Tregaron eagle, a mate as soon as possible!

Apologies for lack of recent postings but it has been a very busy time one way or another recently.

Over the past few weeks the Hawfinch guru, Dave Smith, has been scouring the woods around Dolgellau looking for Hawfinch nests to help with an RSPB research project on predation rates. He has located at least fifteen nests and I have been up and installed research cameras at  8 of these. Two of the nests were subsequently predated by Jays. 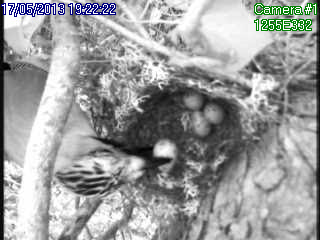 Caught in the act. A Jay renoves an egg from a Hawfinch nest on camera. It later returns for the rest of the clutch.

So far 23 young have been ringed at seven nests, with two more still to do. 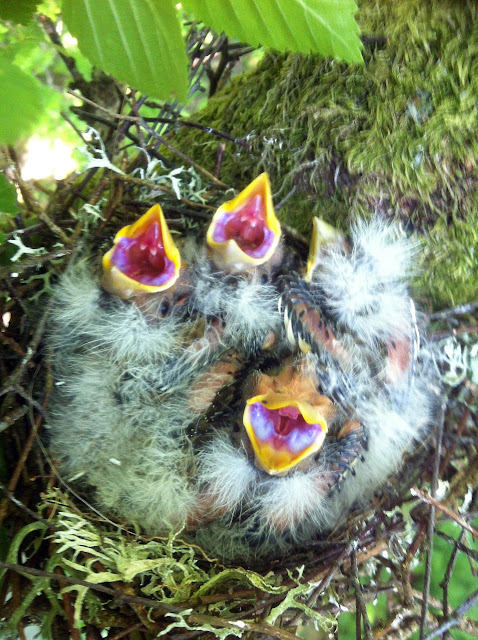 Had no idea Hawfinches had fluorescent purple and yellow gapes. This must presumably help the adults to locate the right place to deposit food in the dense foliage where they frequently nest.


In the end we decided not to colour-ring the chicks because of the risk of them being removed by the adults. Hopefully we may catch some of them at the feeding site next season. At least five of the breeding adults were seen to be wearing colour-rings but reading them proved difficult as the cameras were largely at the wrong angle to see legs and the birds were in and out of the nests fairly quickly. 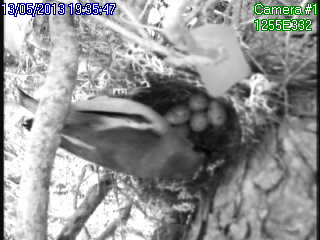 A12 incubating a nest in the main feeding site wood. Unfortunately this is the one shown being nobled by a Jay above.

It may prove easier to identify colour-ringed adults when they are feeding recently fledged young. 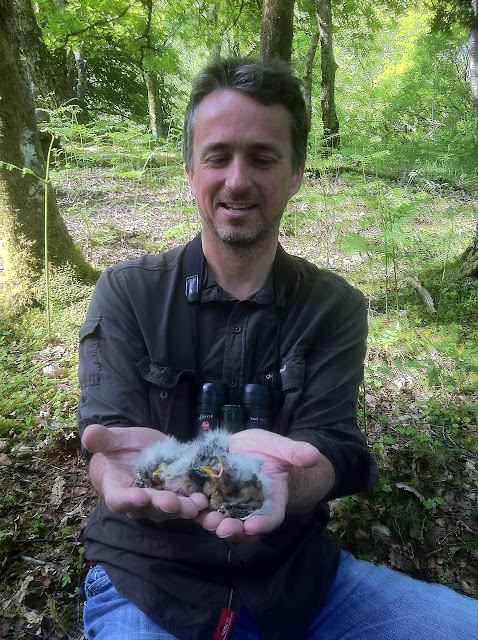 Dave Smith, the happy Hawfinch guru
Posted by Tony Cross at 14:26 No comments: