Over the summer I have once again been busy working on the Curlew Country project trying to reverse population declines of this charismatic wader in the Shropshire Hills and Welsh Marches. Part of this work involves colour-ringing adult Curlews at the Montgomeryshire Wildlife Trust's Dolydd Hafren Reserve on the Severn between Welshpool and Newtown. To date we have colour-ringed 114 adults there along with about 40 at other sites including a coastal site at Llanrhystud, just south of Aberystwyth. Our main focus is to gather information on breeding site fidelity and adult survival rates but long-distance movements are always of great interest. In May, a mate of mine, Clive McKay, emailed to say that whilst he was out doing survey work he came across one of our colour-ringed Curlews on its nesting territory in Lanarkshire. This bird proved to be one of the ones colour-ringed at the winter roost at Llanrhystud. On 4th May 2017, another of the birds from this roost was resighted nearly 2,000km NE on its breeding grounds in Lapua, Finland. These two recoveries show clearly how birds wintering together at a single site may have very different origins. Then, on 11th July 2017 the curlew below, ringed at Dolydd Hafren, was photographed at Petit Port, Jersey, Channel Islands by Mick Dryden- was this a local breeding bird moving south having failed in its nesting attempt? 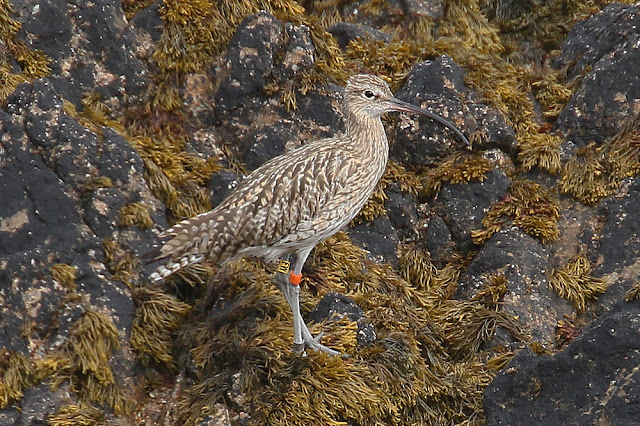 Finally, to cap off a great set of recoveries,  a short while ago, on 24th September I was netting again at Llanrhystud and caught a German-ringed Curlew wearing colour-rings. 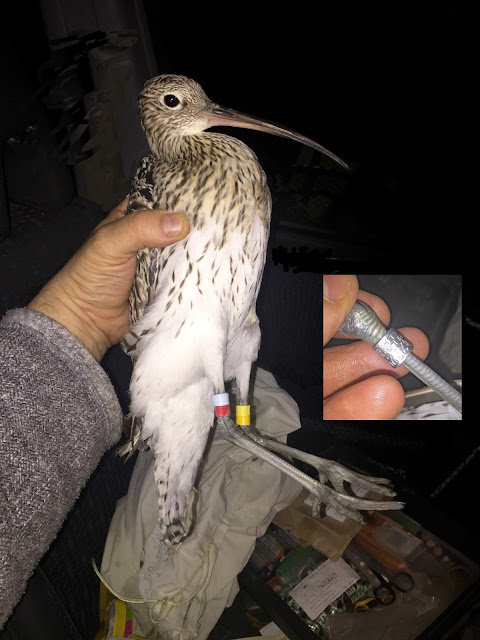 I had hoped that this bird would have been one ringed by Natalie Meyer, with whom we have been working to promote Curlew conservation internationally and had spent some time with recently at the International Wader Study Group conference in Prague but alas it wasn't and I am still awaiting details. 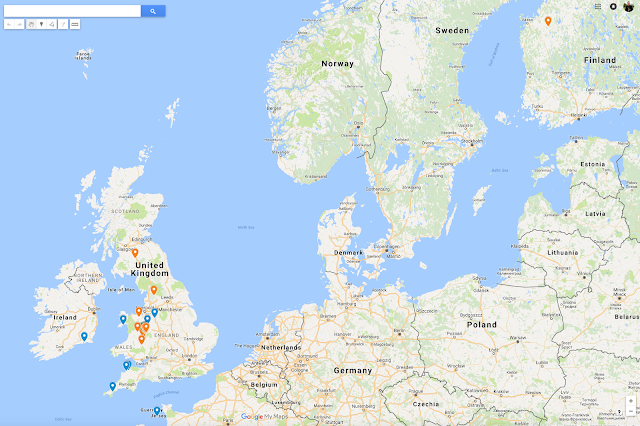 The map above shows all the Curlew colour-ring sightings so far with wintering sites shown as blue markers and breeding season records as orange markers Although a fairly new project the Curlew colour-ringing has already provided a wealth of information and will continue to do so for many more years to come. 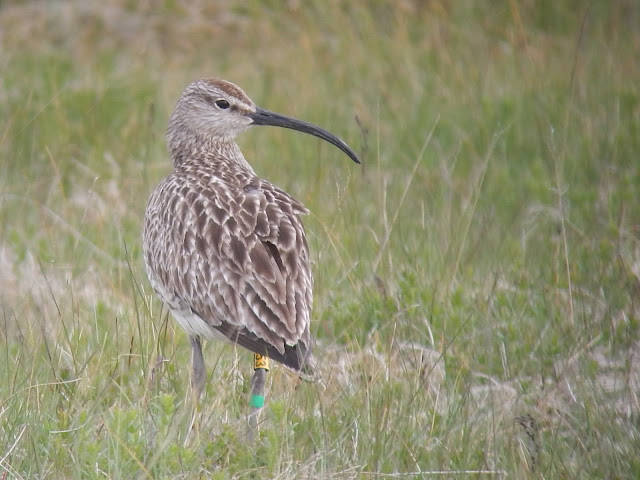 Whilst I'm blogging, here's a great shot of one of the other Numenius we colour-ring! A Whimbrel photographed on its breeding territory in Iceland for the second year running by Camilo Carneiro - ringed at Llanon on 26th April 2012.
Posted by Tony Cross at 11:55 1 comment:

There is a roving Spanish Dunlin..... 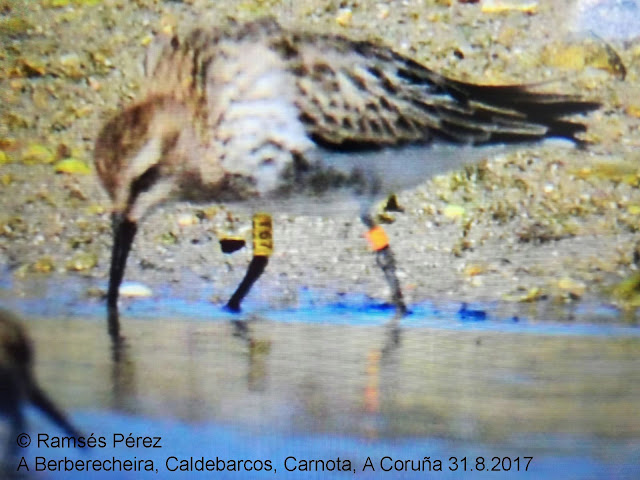 Just received another postcard, this time of YELLOW T67 1,142kms SSW in NW Spain (1,142kms). It was originally ringed just a week earlier at Ynyslas on 24th August.

P.S., for the younger readers out there, a postcard was how we older folk used to piss people off with our holiday adventures before the invention of Facebook!
Posted by Tony Cross at 17:01 5 comments: