The last few weeks have seen various combinations of the team sat around for days on end at our two Hawfinch feeding sites. The results have been pretty rewarding though. 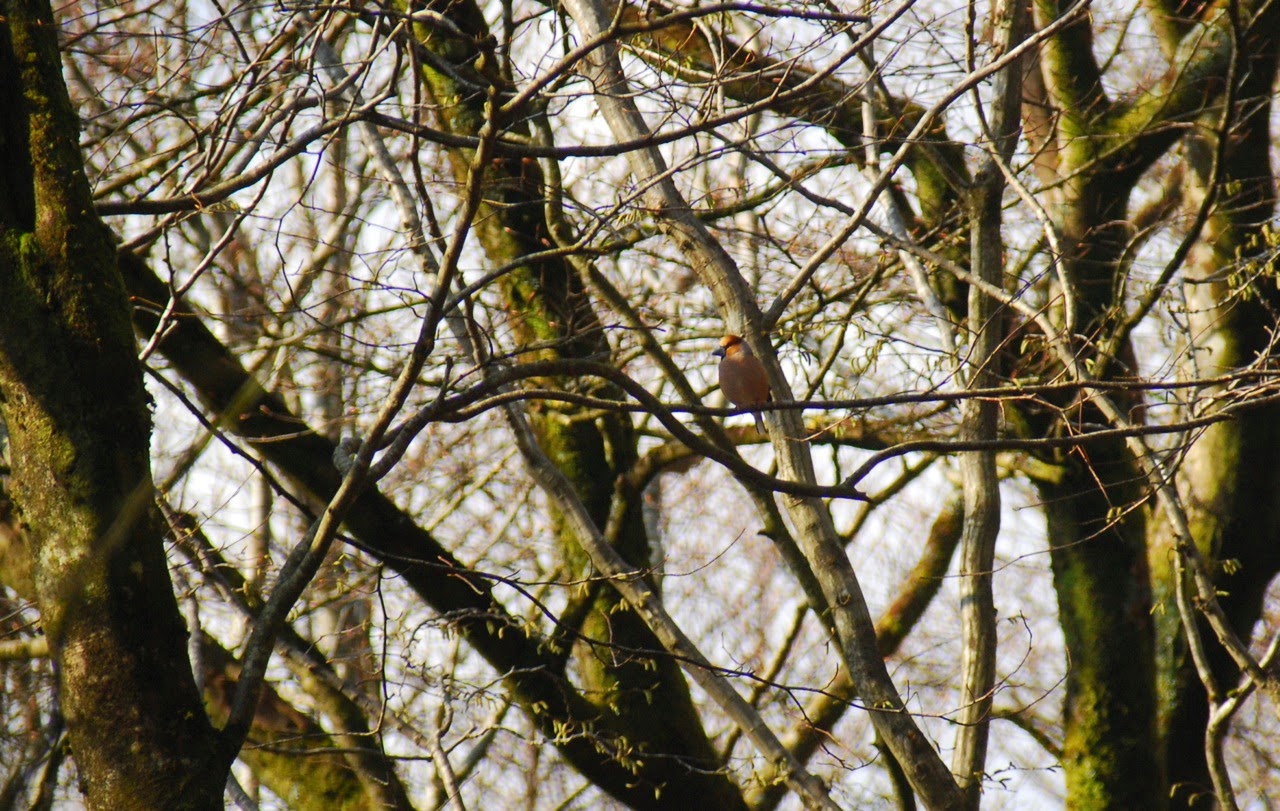 Hawfinch waiting to come down to the feed. They tend to have a good look for quite a while before dropping down and anything that disturbs them in the meantime, such as other birds in a net, squirrels or people passing-by means they just won't drop. Whoosh netting seems to get around this problem......... well two bits of it anyway - no unwanted tits in mist-nets and the current Grey Squirrel whoosh-net total is 7!! Just need to sort the passers-by now. 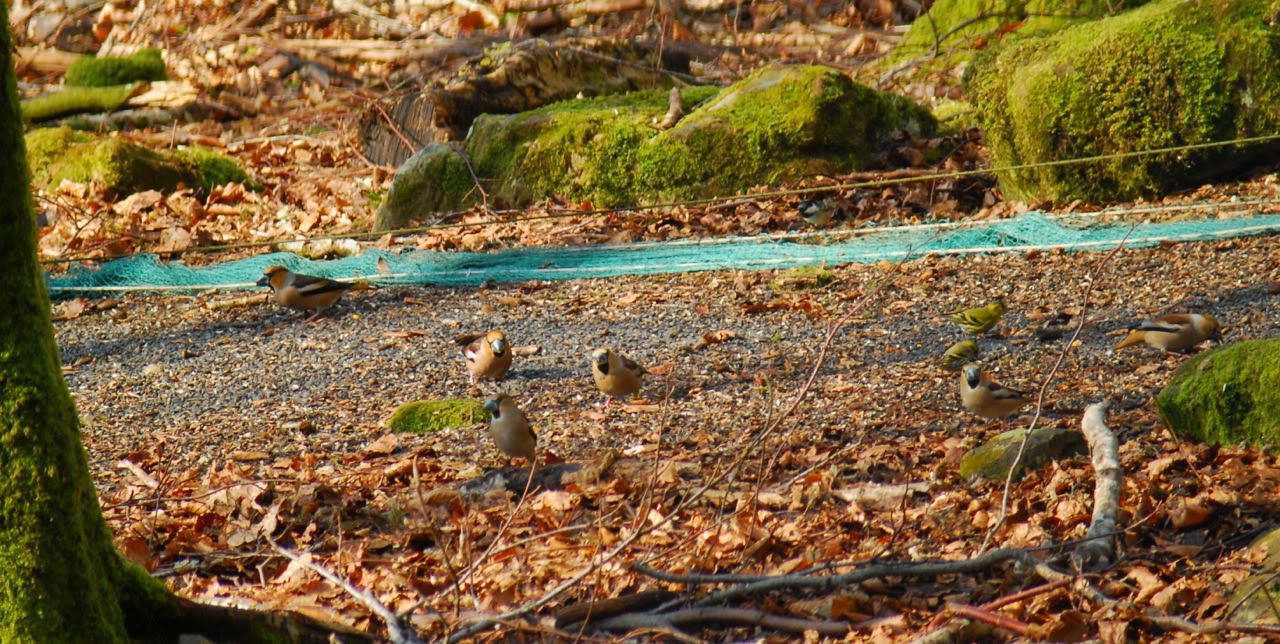 This year we have largely switched to whoosh-netting rather than mist-netting and it is paying great dividends. So far we have caught and ringed 60 new birds along with a dozen or so retraps. We have also managed to catch the Forest of Dean bird (White F3) that was photographed by Trevor Bashford on his garden feeder last summer. 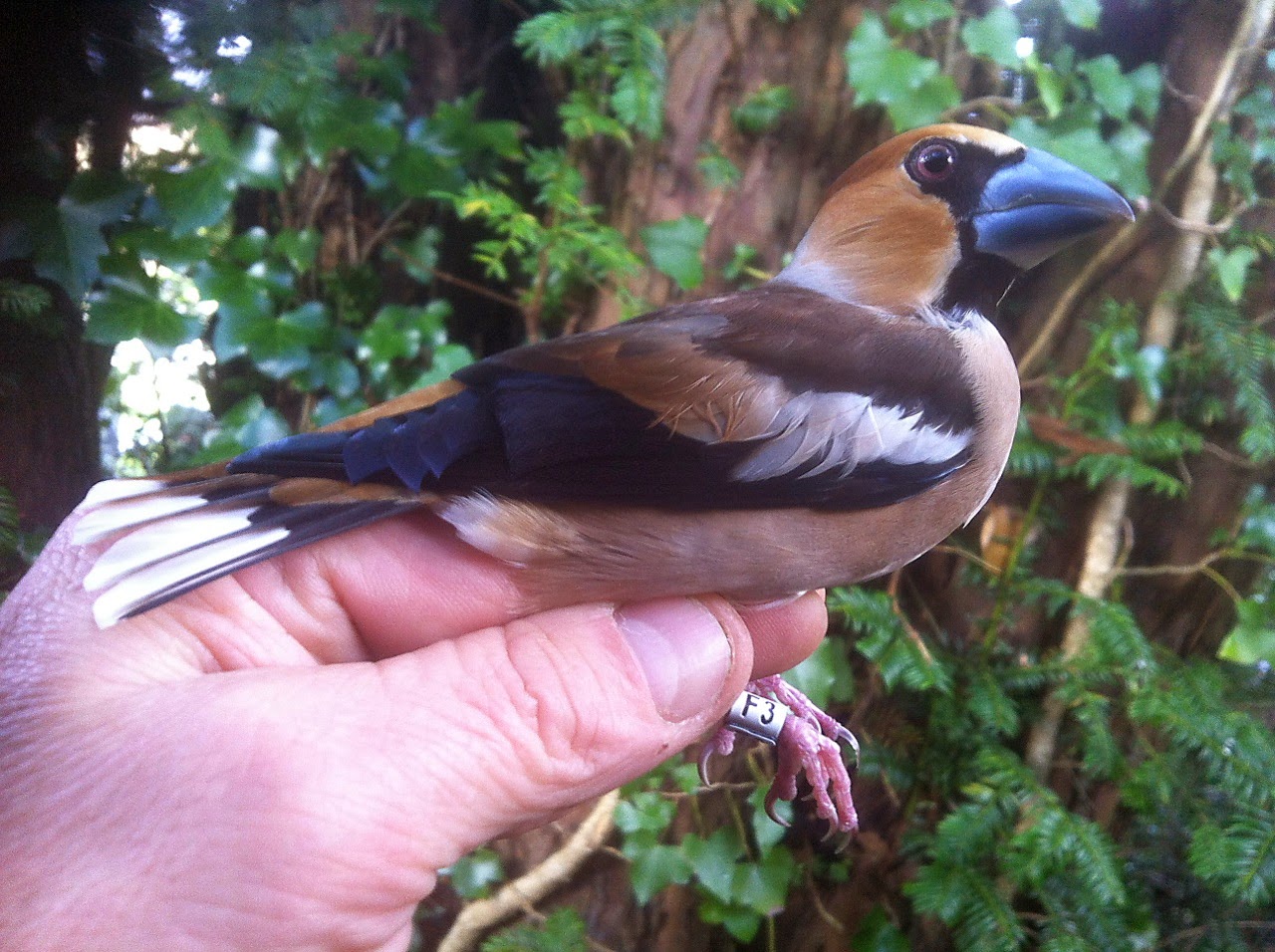 An immigrant from the deep south!

Also of great interest is the trapping of three more of last year's pulli. We have now caught and colour-ringed about 20% of the pulli we ringed last year which shows that post fledging survival in this species must be pretty good locally (given that there are undoubtably others out there that we haven't retrapped yet).

Last year we only managed to ring 64 new birds, but with the best month for catching still to come, I think this year will see a massive increase on last year's figure. 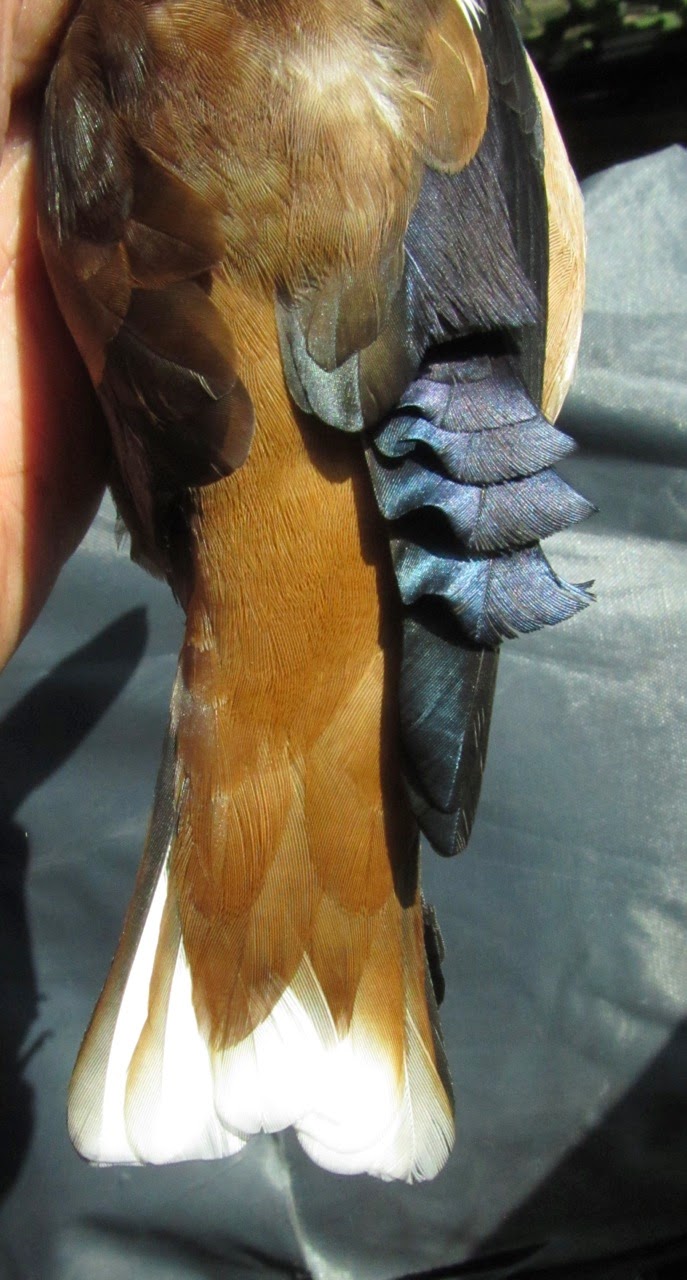 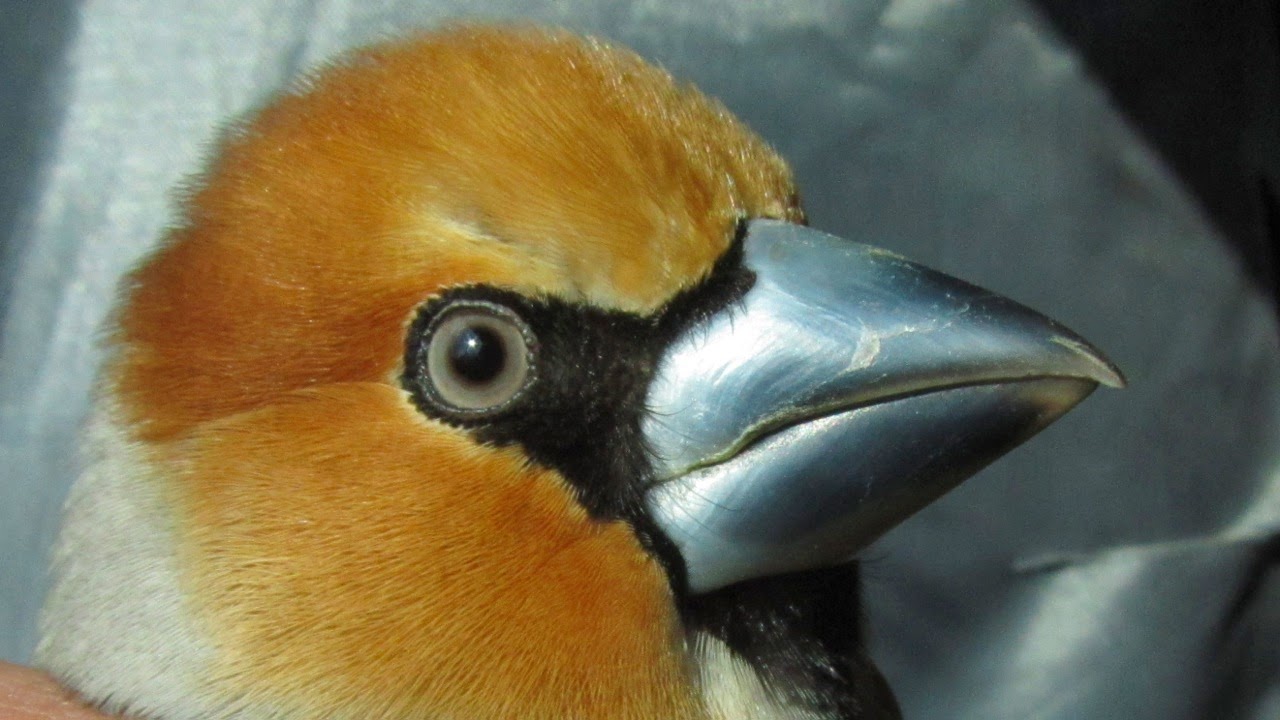 Unlike Opal Fruits (or Starbursts to our younger readers!), these are made to make your eyes water!!

Thanks to Brendan for the photos.
Posted by Tony Cross at 12:59 No comments:

It's been a very busy Woodcock ringing winter for me, with a record of 263 birds caught this winter. Ten days ago I caught and ringed my 1,000th Woodcock since Tony Cross kindly agreed to train me in the dark arts of dazzle and netting back in 2008.

A fortnight ago, assisted by Terence Lambert and Sarah Cookson, I fitted a satellite tag to a Woodcock on my ringing site near Aberystwyth, this and 10 geolocators are part of a long term study of Woodcock being conducted by Dr Andrew Hoodless of the Game and Wildlife Conservation Trust.

So far 24 satellite tags have been fitted to Woodcock in the UK over the past two years, with another 12 this winter. Although it was inevitable that as these tags, which required sunlight to keep batteries charged, would be stretched to give a constant data flow, the knowledge gleaned from this project has been well worth the money and effort. 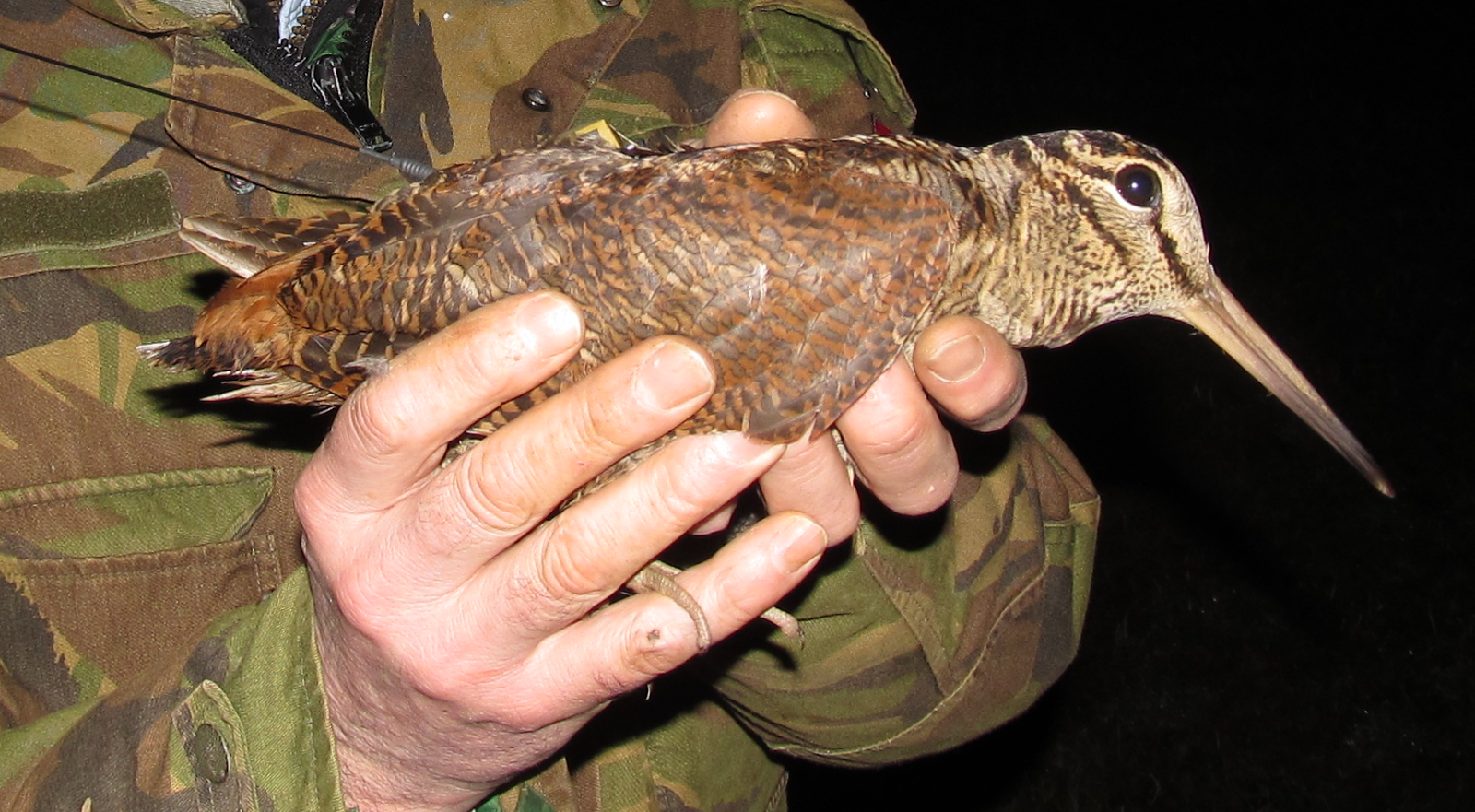 We now know that Woodcock migrate in a series of long stages of up to 1000km before pausing to recover body condition over a period of a week to ten days.

Three of the Woodcock in our study have flown much further east than expected spending the breeding season in Siberia.

The pattern of dispersal from one wintering site such as Cornwall, where several Woodcock have been tagged, has been wide and range from Sweden 2,000km away to Siberia a journey of 6,000km.

Tagging has also allowed us to accurately monitor departure dates. Correlation with weather maps is beginning to reveal just how savy Woodcock are on how and when they migrate. One Woodcock, Busy appears to have made a large U turn in the middle of the English Channel on his spring migration last year. Inspection of weather maps suggest that this was due to him encountering increasing head winds on his final stage to Cornwall, so he diverted to the Isle of Wight.

It has been very exciting to follow some of our Woodcock over several year. Rebecca who I tagged near Llandovery in February 2012 has returned to exactly the same wintering site each year. In the next few days she will set off on a third spring migration. It is amazing to be able to compare the migration routes taken by Rebecca each year and to note that she appears to be very loyal to both wintering and breeding sites.

The work conducted by The Woodcock Network by ringing over 1,200 birds in the UK and Ireland each year is providing data which would have been impossible without the dedication of our ringers who leave the comfort of their arm chairs on cold and wet winter nights in order to catch and ring Woodcock. Although this hi-tech research is very exciting, no clever gadget will ever be able to find out the details that the sustained 'grunt' work of gathering biometrics give us when we are ringing.

A sustained ringing effort on my site near Aberystwyth where I have caught over 700 Woodcock in the past 5 years is now giving us valuable data on such things as wintering site fidelity. In the winter of 2012/13 of the 88 adults I caught 41% were retraps form previous winters! Work is now being done to see if this is the case on other sites in the UK.

I will always be grateful to Tony Cross for so enthusiasticly agreeing to train me to ring Woodcock back in 2008. I guess neither of us realised at the time what would grow from these early few steps out onto a muddy field. The Network now has over 30 ringers, from the North of Scotland to the Channel Isles, infected with a passion for Woodcock ringing, huge thanks are also due for their dedication.

If you indulge in Facebook you can get regular information about Woodcock from enthusiasts who post details from all over the world. just look us up at The Woodcock Network. You can also follow Woodcock migration on the www.woodcockwatch.com website run by the Game and Wildlife Conservation Trust.

With our wintering Woodcock now leaving we will soon be counting down the months until we catch our first Woodcock of winter 2014/15.... but there's a summer to enjoy first... isn't there?
Posted by owen williams at 07:58 No comments: 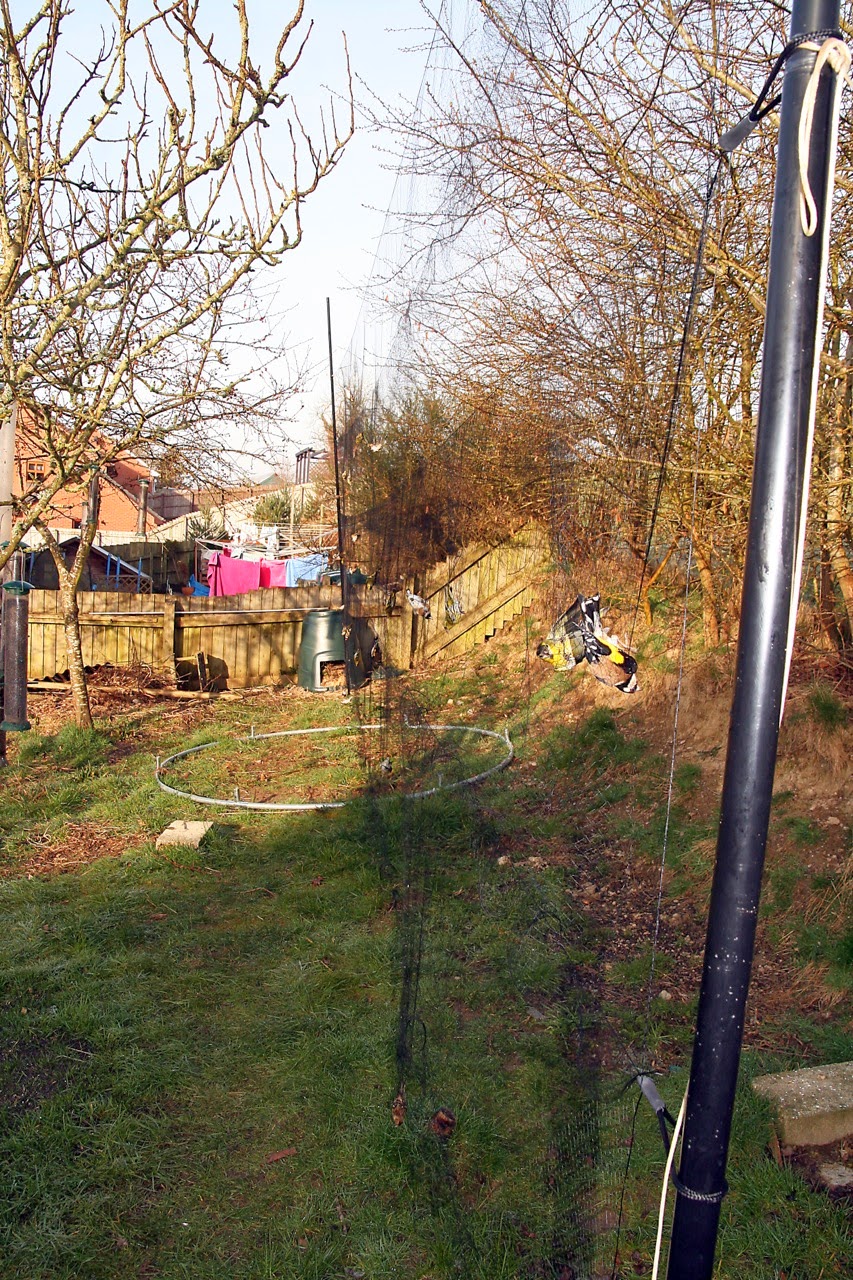 Bamboo is still there and yes, it still looks like it could do with a bit of attention, but what an amazing year so far in the garden ringing wise. Had another catch of 37 new birds today including the first Brambling. So far this year I've managed to ring 228 Siskin, 107 Goldfinch, 76 Lesser Redpoll, 6 Chaffinch and a Brambling. Paul, who is only 6 kms down the road, has had another 210 Siskin, 65 Lesser Redpoll, 2 Common Redpoll, 16 Goldfinch, 12 Chaffinch and 4 Greenfinch. Quite a few birds, including this smart adult male Lesser Redpoll, have visited both gardens and we've also had a couple of control Lesser Redpolls and Siskin. Who said garden ringing was uninteresting? 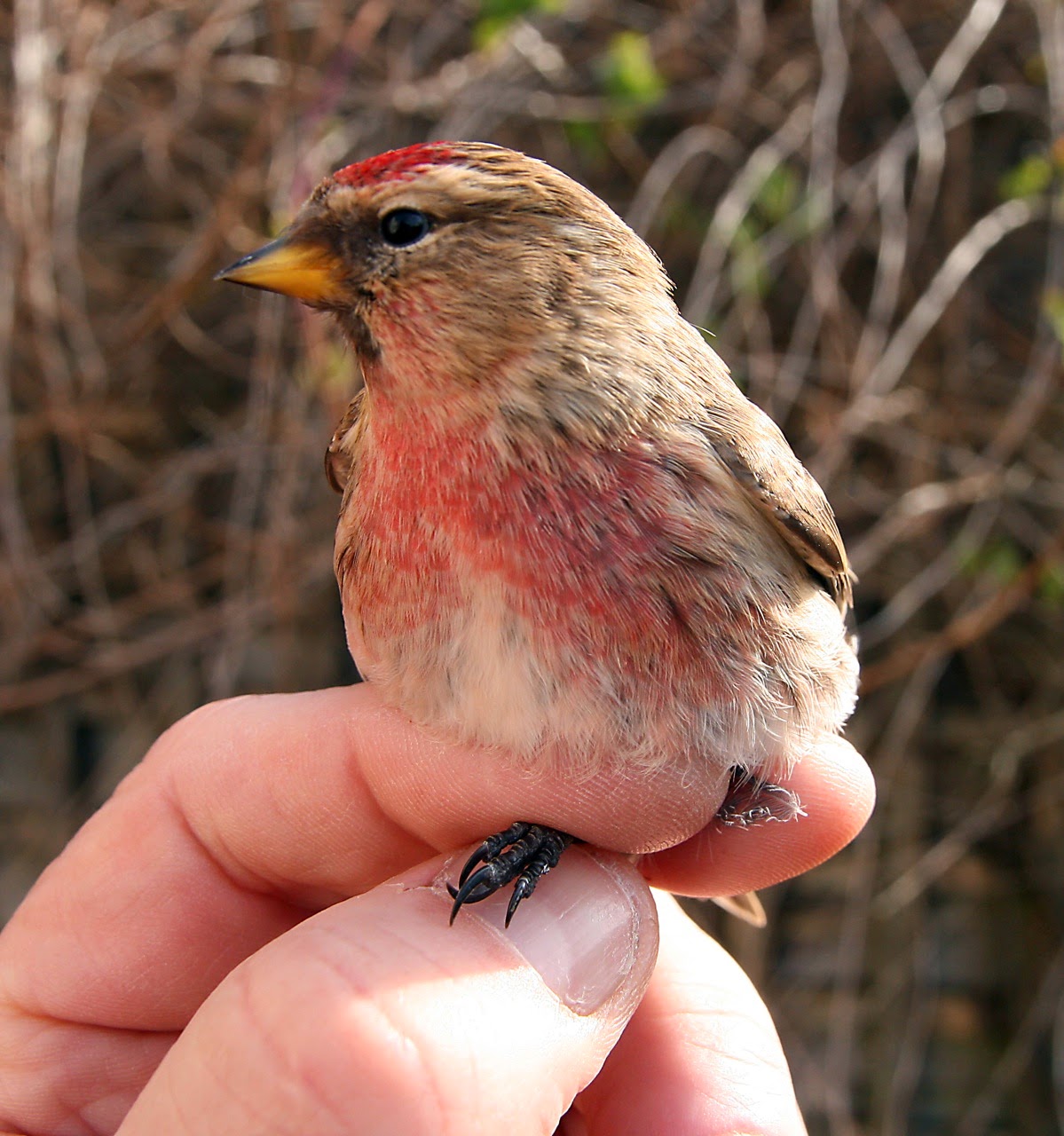