Night-owling - something to grouse about!

Been a while since anything got posted so I thought last night's exploits may warrant a resurgence of the blog.

This time of the year I am usually pretty much nocturnal doing various Nightjar surveys in  Mid, North and South Wales. This year is no exception and along with Ed O'Connor I was out at Clocaenog last night trapping and tracking Nightjars to assess the potential impacts of recent wind-farm development. At one nest, found right in the middle of a horribly dense Sitka Spruce plantation by radio-tracking the female, we managed to catch the male and he turned out to be one of the six birds we had fitted GPS trackers to last autumn to discover more about the migration routes of British Nightjars. Annoyingly, two of the trackers we  recovered earlier in the year proved to have failed to record any locations - truly gutting given the time, effort and expense lavished on them. Fingers crossed it is 3rd time lucky with this one. 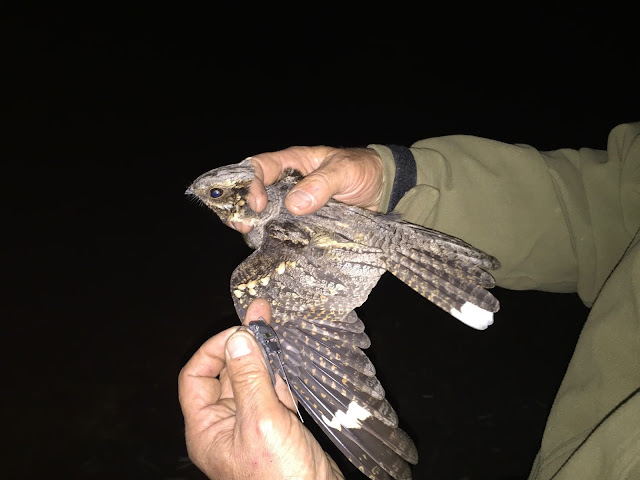 Whilst thrashing through the near impenetrable spruce trees last week searching for this nest I inadvertently flushed a roosting Long-eared Owl. Well last night, armed with a tape-lure forwarded to me by Ewan Weston, I thought we might fill the quiet mid-night period in Nightjar activity not by sleeping, which would have been the sensible thing to do, but by trying to tape-lure the owl. On walking up to the area I had flushed it from we suddenly heard the unmistakable call of a recently-fledged Long-eared Owlet out in some open ground just adjacent to the plantation and soon managed to catch it with a torch and a landing-net. 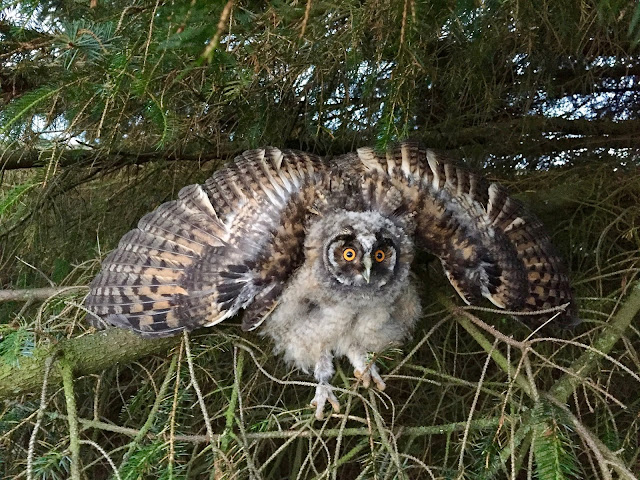 Making itself look as big and frightening as possible is a good defence for this young Long-eared Owl. Was pretty feisty to handle too!

As if all this wasn't exciting enough out from the heather burst a couple of large game birds and quite instinctively I managed to catch one by hand as it flew past. The bird, which turned out to be a half-grown grouse chick caused us some serious soul-searching, mainly because at that time of night, with no internet access and little previous experience neither of us was sure exactly what it was!! I had originally assumed Red Grouse but then realised that Black Grouse was not out of the question either!! If it was a Red Grouse chick it was large enough to take the recommended F size ring - if it was a Black Grouse chick it wasn't big enough to take the larger G size ring recommended for that species. Two of the primary rules of the ringing scheme are that:-

You should only ring a bird if you know what species it is.

The safety of the bird comes first. 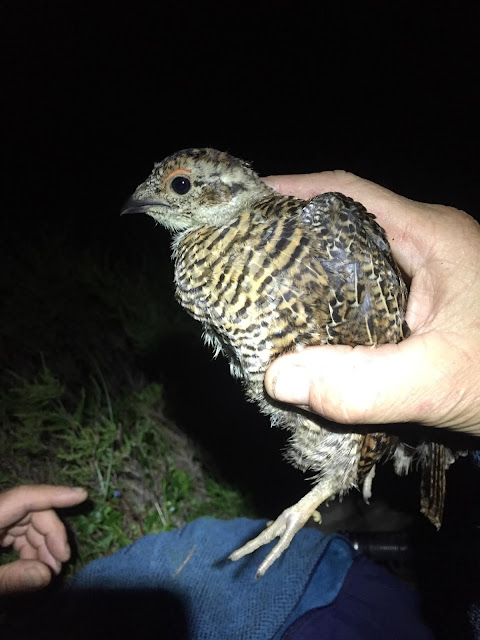 Fitting the wrong size ring to a half-grown chick would be a serious welfare issue so it was released unringed.

I have sent some photos to a Grouse expert for confirmation but think we are coming down on the side of Black Grouse at the moment!
Posted by Tony Cross at 18:20 No comments: