On Monday Silvia and I were trying (unsuccessfully) to ring Waxwings at a site just down the road where there has been a flock building for the past few weeks. During one of the many times I scanned the flock for colour-rings I suddenly caught sight of a bird with an engraved Yellow Darvic! Annoyingly, despite three pretty good scope views over the next few hours, all I could make out was something that looked like U*U. A quick message to Ewan Weston of Grampian Ringing Group confirmed the bird had been ringed in Norway. The following day saw Paul, Silvia and I attempting to see/photograph/catch the bird in question to clinch its identity. Eventually Paul managed to grab a few photos that confirmed the ring code as Yellow ULU.

On Wednesday, with the Norwegian birds identity confirmed, I returned to try and colour-ring a few more to add to the 33 that we have already caught this year. Once again the flock was very mobile with the birds feeding at any one of a vast number of berry trees available. Eventually the flock settled by a net and a passing car flushed them towards it. They all appeared to have flown over the top but on closer look with the binoculars I could see a Waxwing hanging there with its yellow-ringed leg stuck out! What are the chances of that? (well about 1 in 60 actually!). 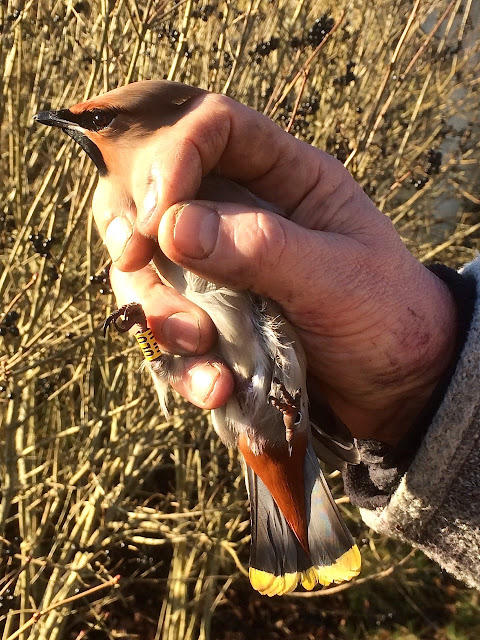 Email confirmation has been received that the bird, a first-winter male, had originally been ringed by Kjell Mork Soot on 15th October 2016 at Grimstadvatnet, Hareid, Møre & Romsdal, Norway 1,264 km NNE of where it was re-trapped. 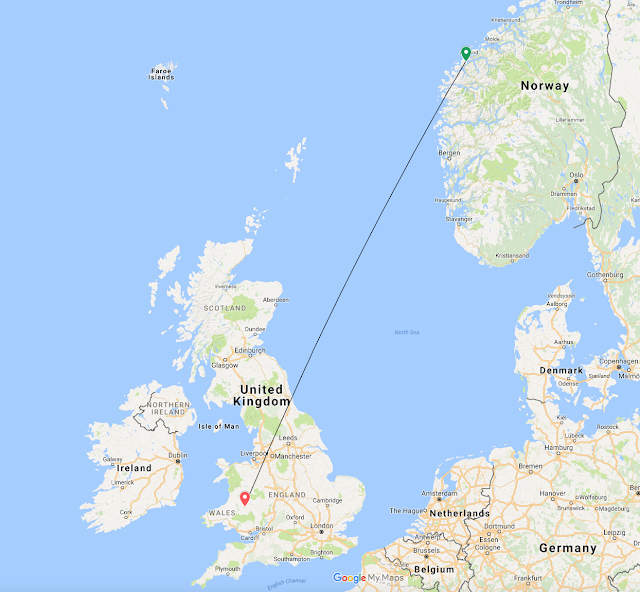 Inputting all the ringing and re-sighting records for our two RAS (Retrapping Adults for Survival) projects is always a bit of a chore but thankfully it is all over and done for another year! The results make interesting reading and show clearly the huge effort that the members of the Mid Wales Ringing Group (and our helpers - particularly Trevor and Chris Bashford) go to to help assess the population health of these two key local species. Our Dipper RAS is one of eight operating nationally on this popular species whereas our Hawfinch RAS is one of just two and the only one currently being used to generate the national trend for this species. Unfortunately, for some unknown reason, the modelling programme failed to produce estimates using the 2015 data. Hopefully this can be investigated and rectified at some point in the future. 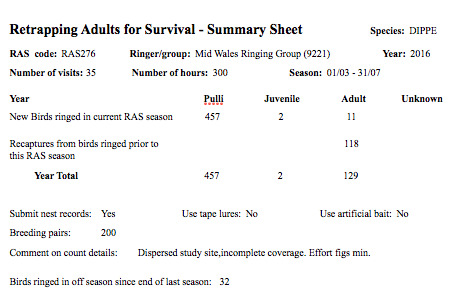 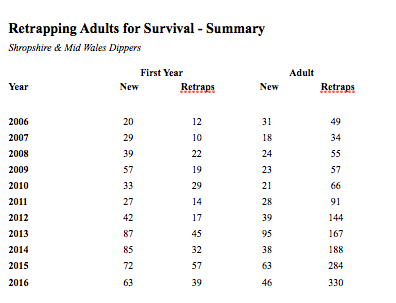 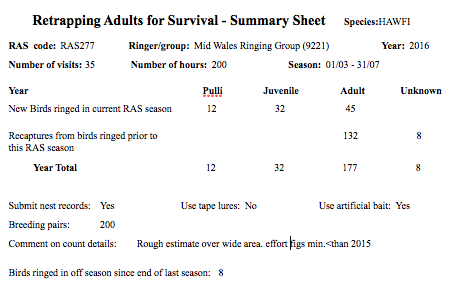 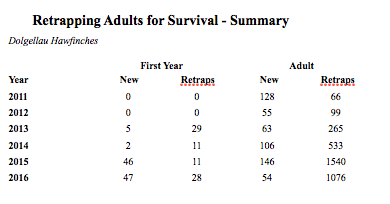 First recovery of the year is a cracker! 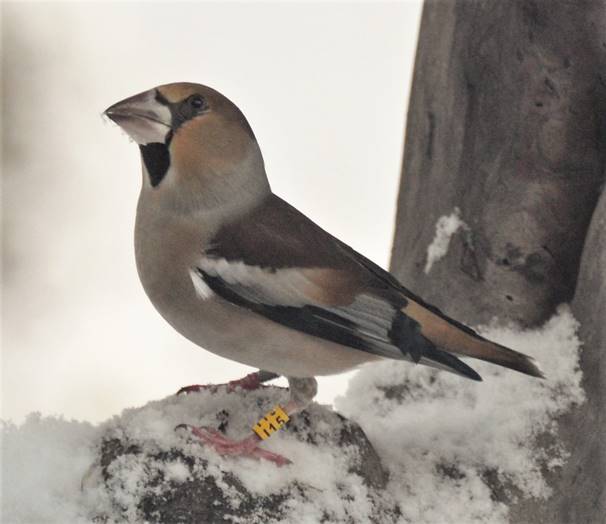 
The photograph above shows one of our colour-ringed Hawfinches on a bird-table in Oddatunet, Trondheim, Sør-Trøndelag, Norway taken by Venke Ivarrud. The bird was ringed as a first-winter female at our feeding site near Dolgellau on 14th March 2015 1452 kms to the SW of where it was photographed. 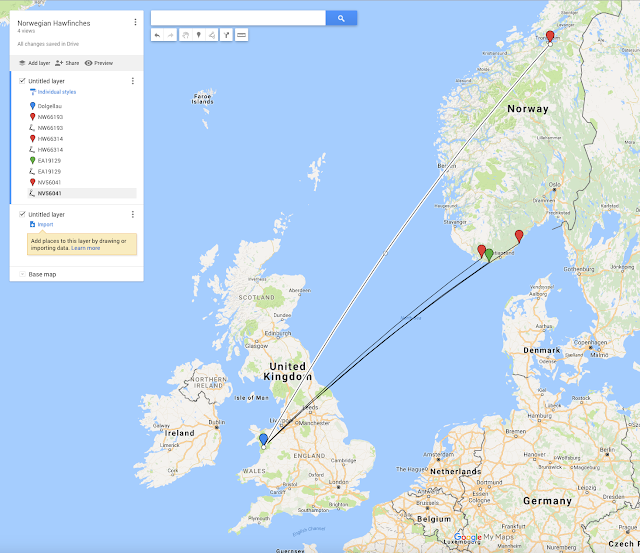 As can be seen from the map above this is our 4th movement of a Hawfinch between Dolgellau and Norway, the furthest north to date, and also the first to be reported there in the winter. Thinking this might be unusual I enquired as to how common Hawfinches were in Norway in the winter and Håvard Husebø of the Norwegian Ringing Scheme replied as follows: -

"The Hawfinch is a relatively common species in Norway, also in the winter. It is a partial migrant and might, as other finches, show irruptive tendencies in their occurence, so the wintering population probably varies between years. But it is a commonplace wintering species especially along our southern and eastern coast, but also in the area where this bird was seen, in the county of Trøndelag."

Many thanks indeed to Venke for reporting her sighting - a brilliant way to kick-start 2017!