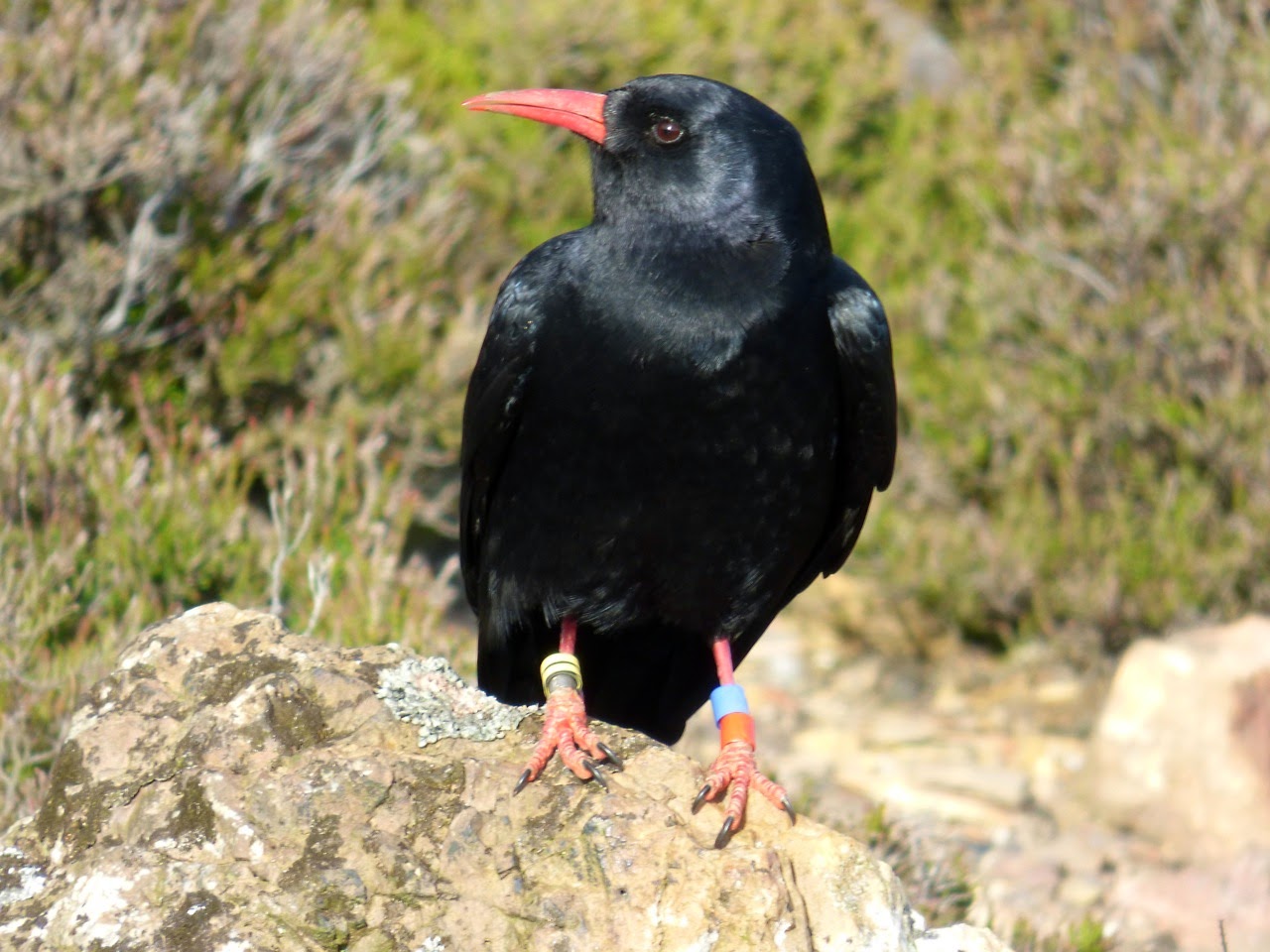 On Tuesday night Adrienne Stratford paid a visit to a Chough roost in Mid Wales and recorded a staggering 60 – 65 birds and she also managed to positively identify at least 47 individuals from their colour-ring combinations. This one visit alone has collected a whole mass of data for the Cross & Stratford Welsh Chough Project that would just not be possible to collect from conventional BTO metal ringing alone and makes the long days of flogging around the coast carrying ladders, ropes and metal spikes well worth the effort.

The data above also shows just how important our nestbox scheme is for this rare and locally important member of the crow family.
Posted by Tony Cross at 12:53 No comments:

The intention was to write an update after every village, but free time was hard to come by and internet access was even harder!! As posted in the previous post some weeks ago, our intentions were to trap and ring birds year after year in a protected area in Romania to prove how important the traditional farming methods are to the wildlife. As well as point counts, mist netting is also being carried out to get more accurate information about population sizes and the health of the birds. With it being the first year, finding suitable site proved to be difficult in some of the villages, but we did get lucky with some of the sites and some good catches were made, with which we will hopefully be able to compare year after year. The bird life out here is pretty much how I imagine the UK’s used to be 100+ years ago (with a few other species thrown in). Intensive farming in the UK really has made a massive dent in the population of many species, let’s hope the work we’re doing out here will stop it from happening to another country.

So, what did we catch? One of the main species we were trying to target was Red-backed Shrike, as these are a good indicator of how rich the area is in insects. In the 5 weeks we managed to trap and ring 95, so a good start. Other highlights included 5 Long-eared Owls, 2 Wrynecks, 4 Barred Warblers and many more. Complete list below (species in no particular order sorry!). 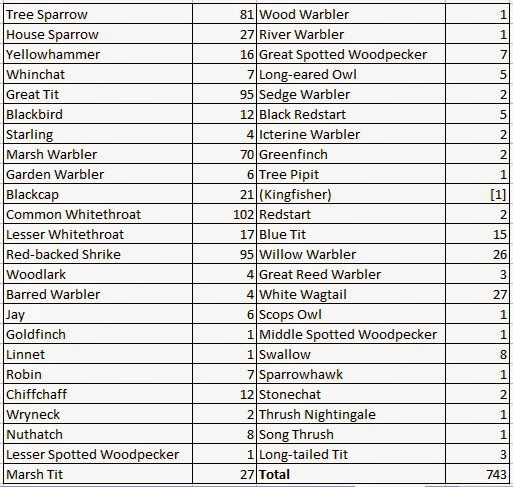 Despite the set back with a few of the villages not producing as much as I'd have liked, it was a pretty successful first year, and one that we can definitely work from. Roll on 2015!! 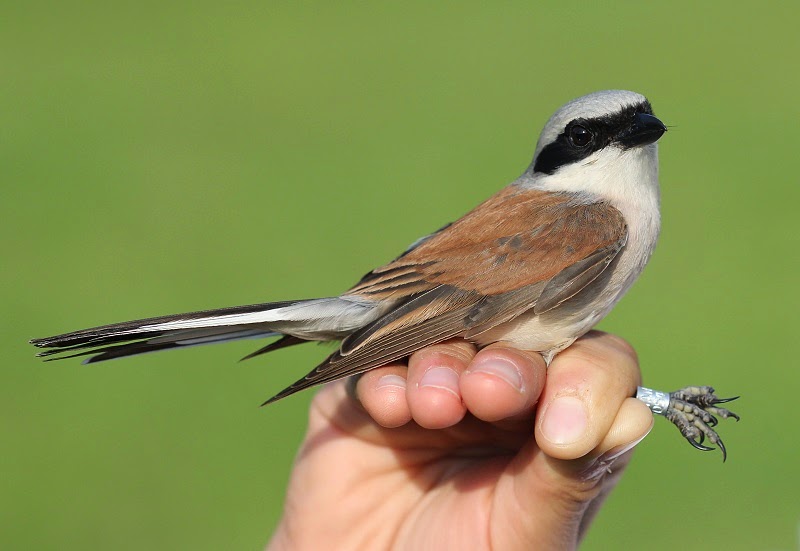 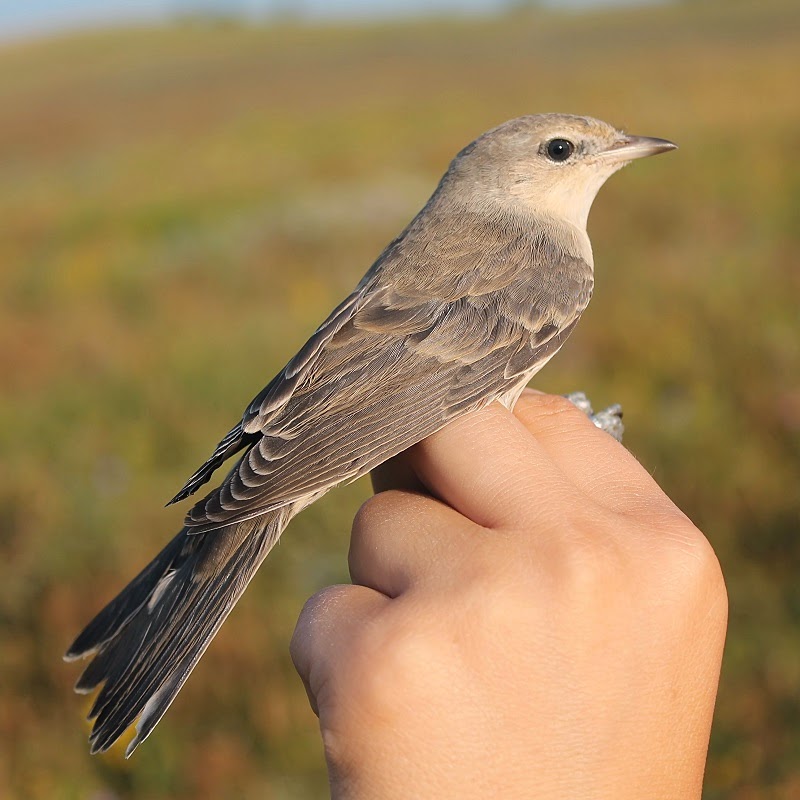 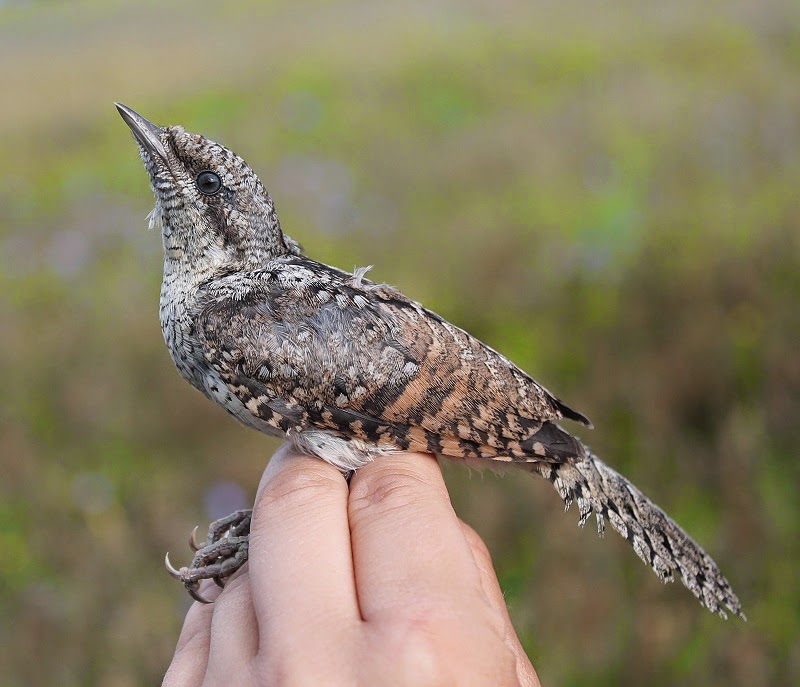 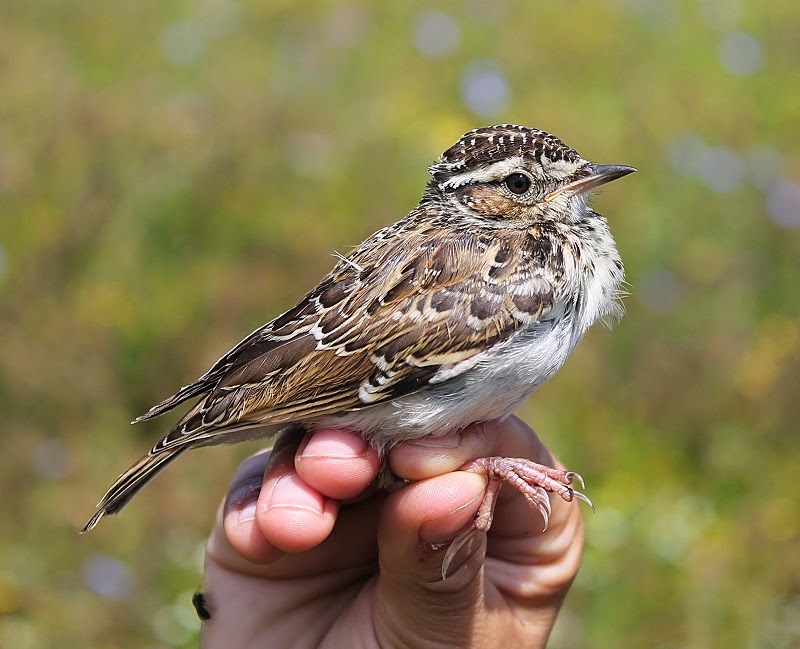 Last night Jane and I paid the first visit of the year to the Dyfi/Aberleri National Nature Reserve behind Borth. The intention was to set some nets, ring some Swallows, furl some nets, sleep, open some nets, ring some warblers. First half of the plan went OK with 87 Swallows and 10 Sand Martins caught but then we got to the 'ring some warblers' part. Inexplicably, in the middle of August, the reed beds were absolutely silent and just 1 Reed Warbler and 2 Sedge Warblers  were caught. 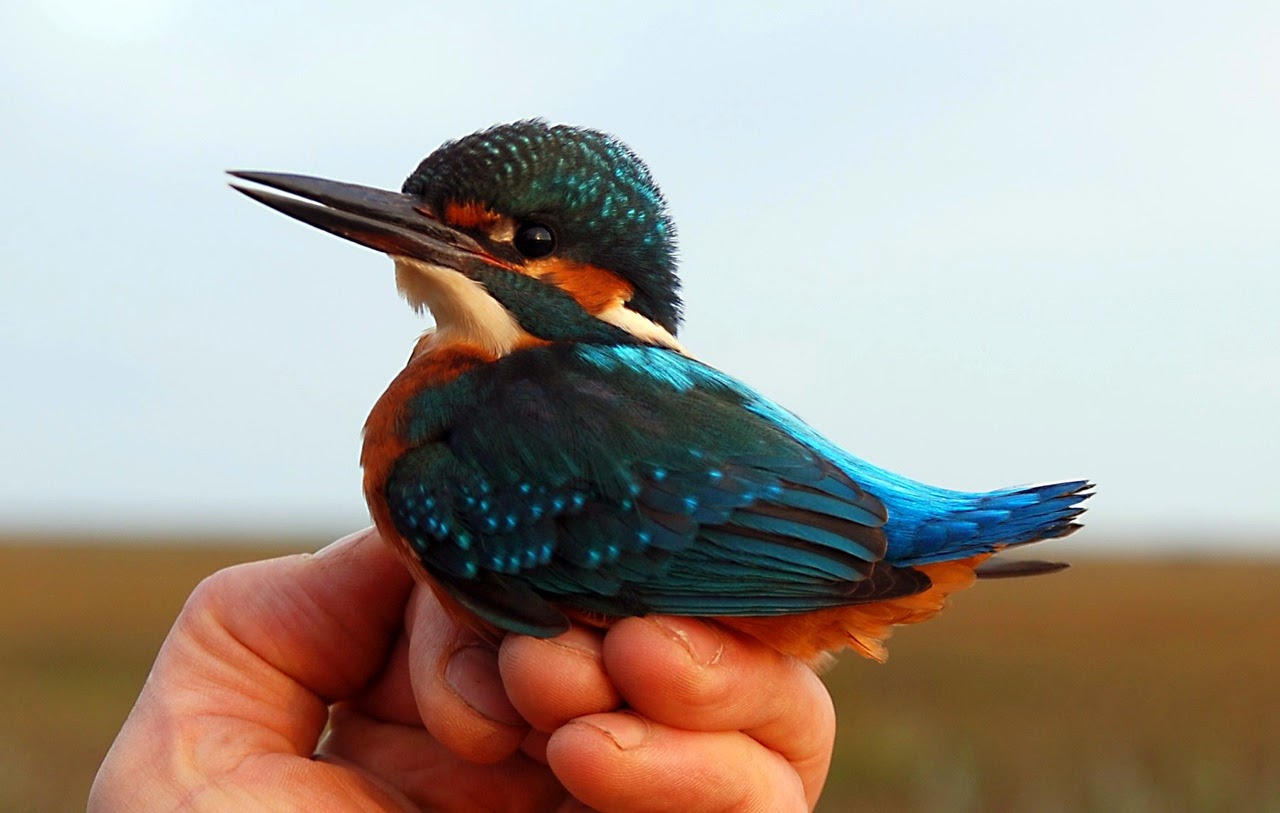 By way of a consolation for the early start and low warbler turn-out a net over the Leri produced this cracking juvenile (male?) Kingfisher (and narrowly missed 2 Greenshank) and we briefly had an interested onlooker in a ring of murky water! 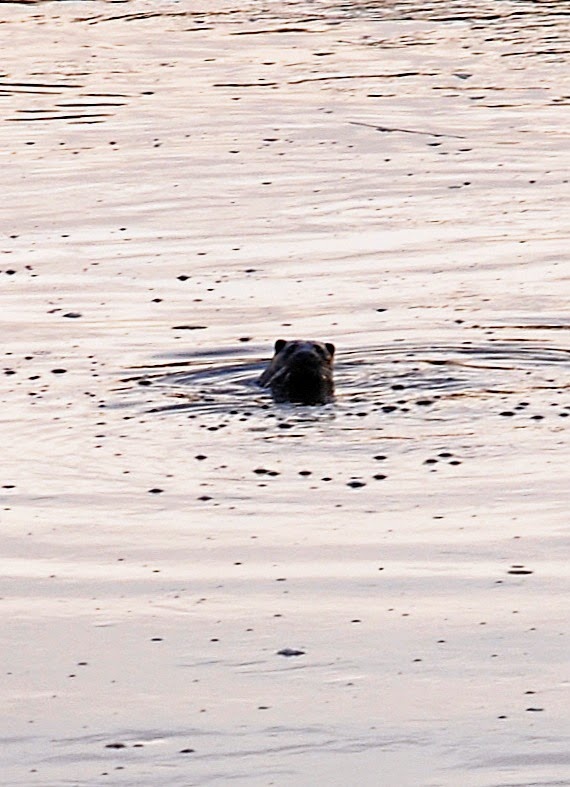 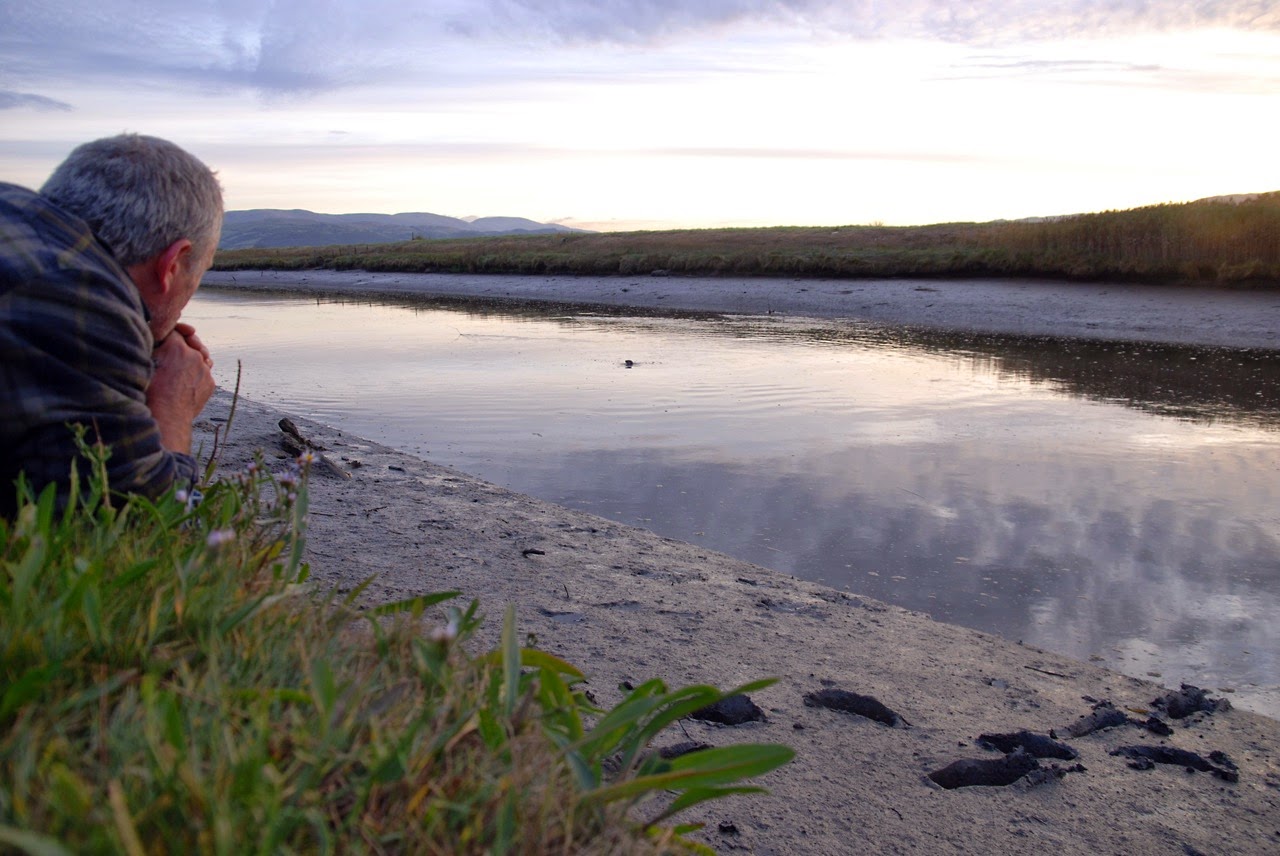 You looking at me?!

Photos by Jane
Posted by Tony Cross at 11:40 No comments:

Just too good a set of photos not to post something about Nightjars again! 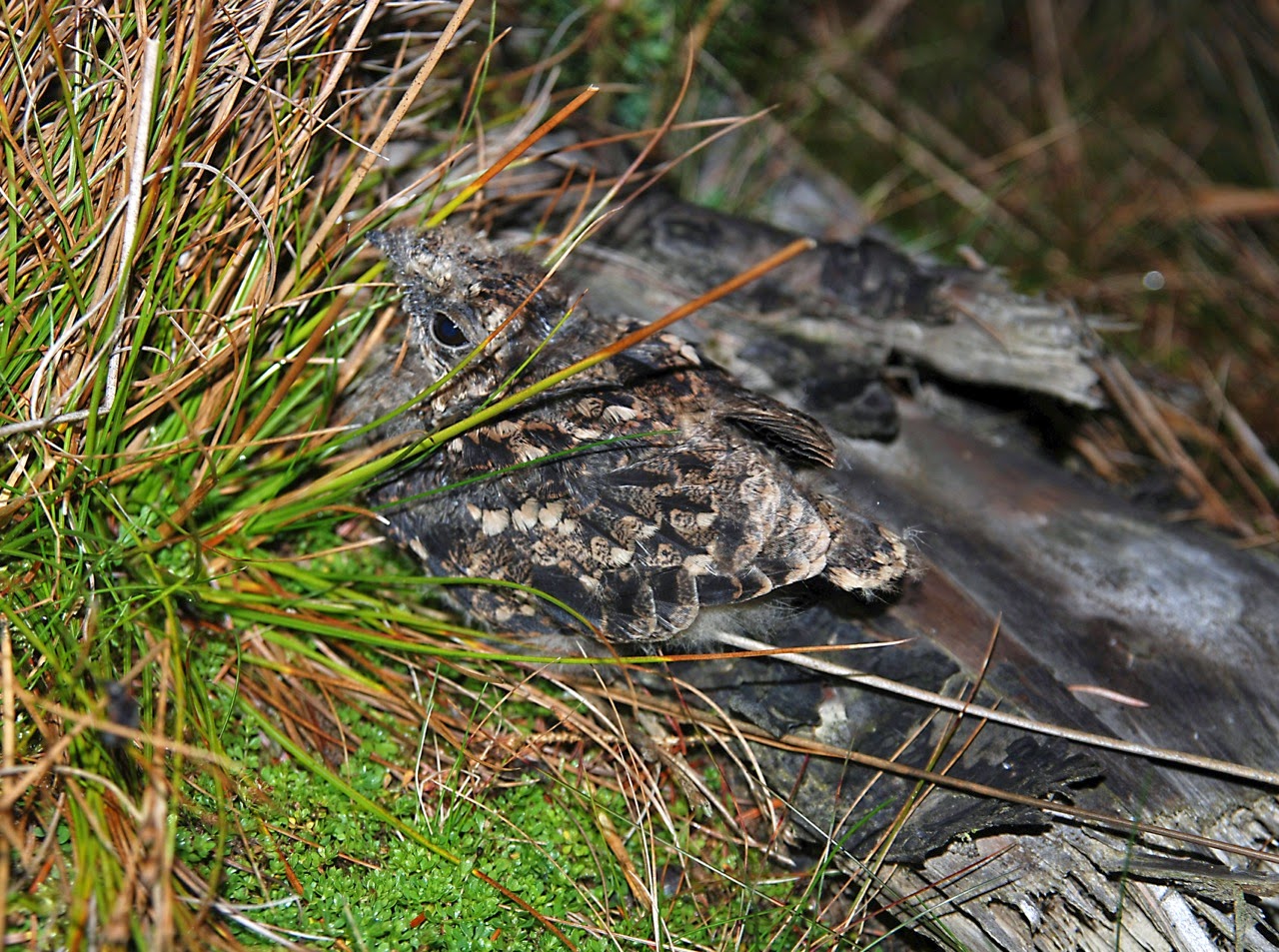 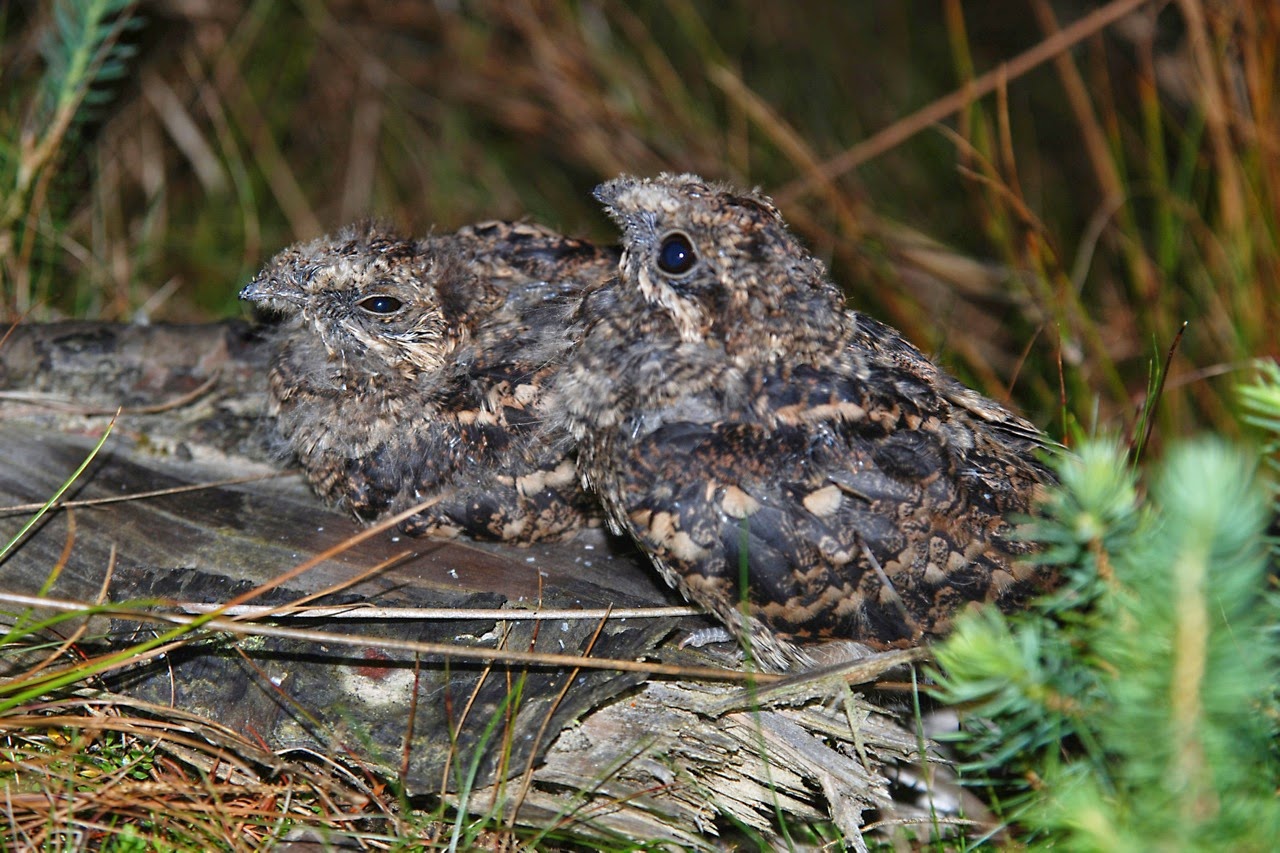 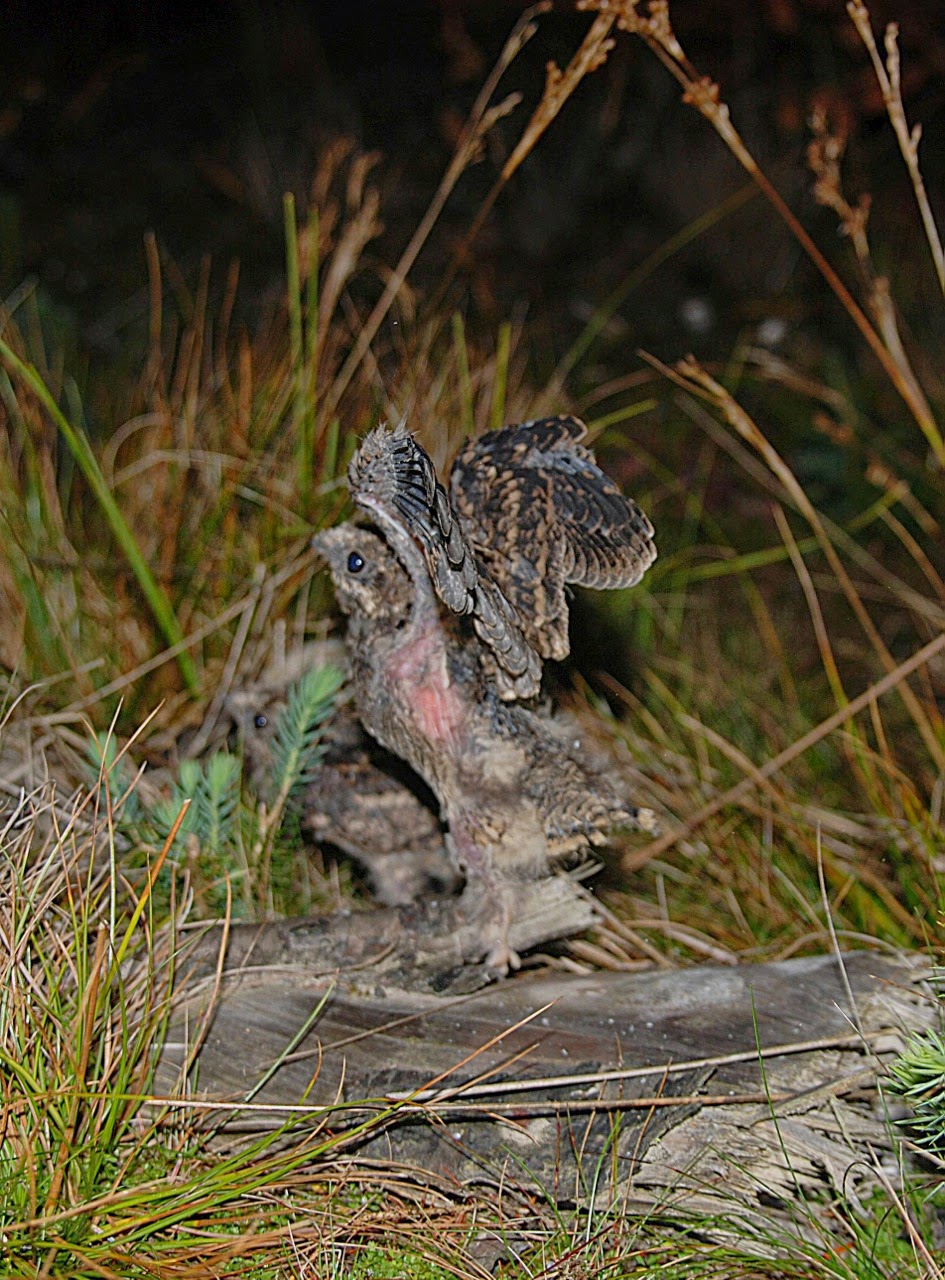 And a few seconds later - Nightjar chicks can fly at a surprisingly early stage (about two weeks old) but, despite a good effort, this one isn't quite there yet!

Pity it isn't in focus, could have been a good candidate for WPY if it had been - actually, it might still make the artistic category ;)

On Thursday night Jane and I found another Nightjar nest in North Wales with two perfect ringing-age pulli and managed to catch mum too. Paddy also managed to catch an unringed juvenile recently so 74 up!!

Last night Mike Shewring and I went to ring a second brood in South Wales but unfortunately the nest had already failed (probably in the recent heavy rains). It was quite a cold night (10C)  and everywhere seemed remarkably quiet. None of the radio-tagged birds were in residence during the middle part of the night so I guess we are pretty much at the end of the nesting season for most Nightjars now, although Paddty still has a nest which should only just have hatched. Fingers crossed for this very late nest which is the female's third clutch of the year - she reared two chicks on the first attempt and then failed at hatching on the second one. 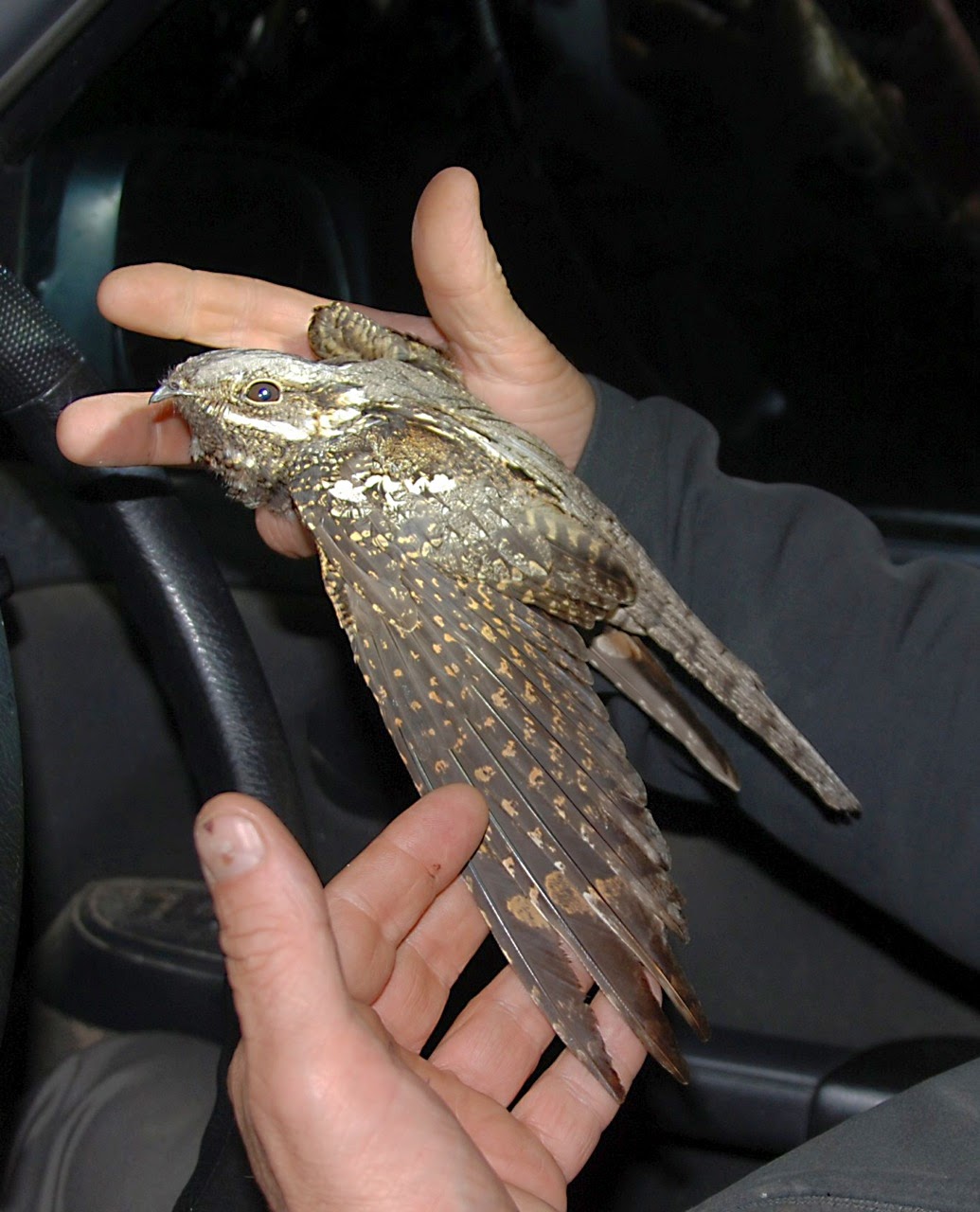 Adult female Nightjar in the hand - a rare beast in North Wales this year!
Posted by Tony Cross at 09:48 No comments: 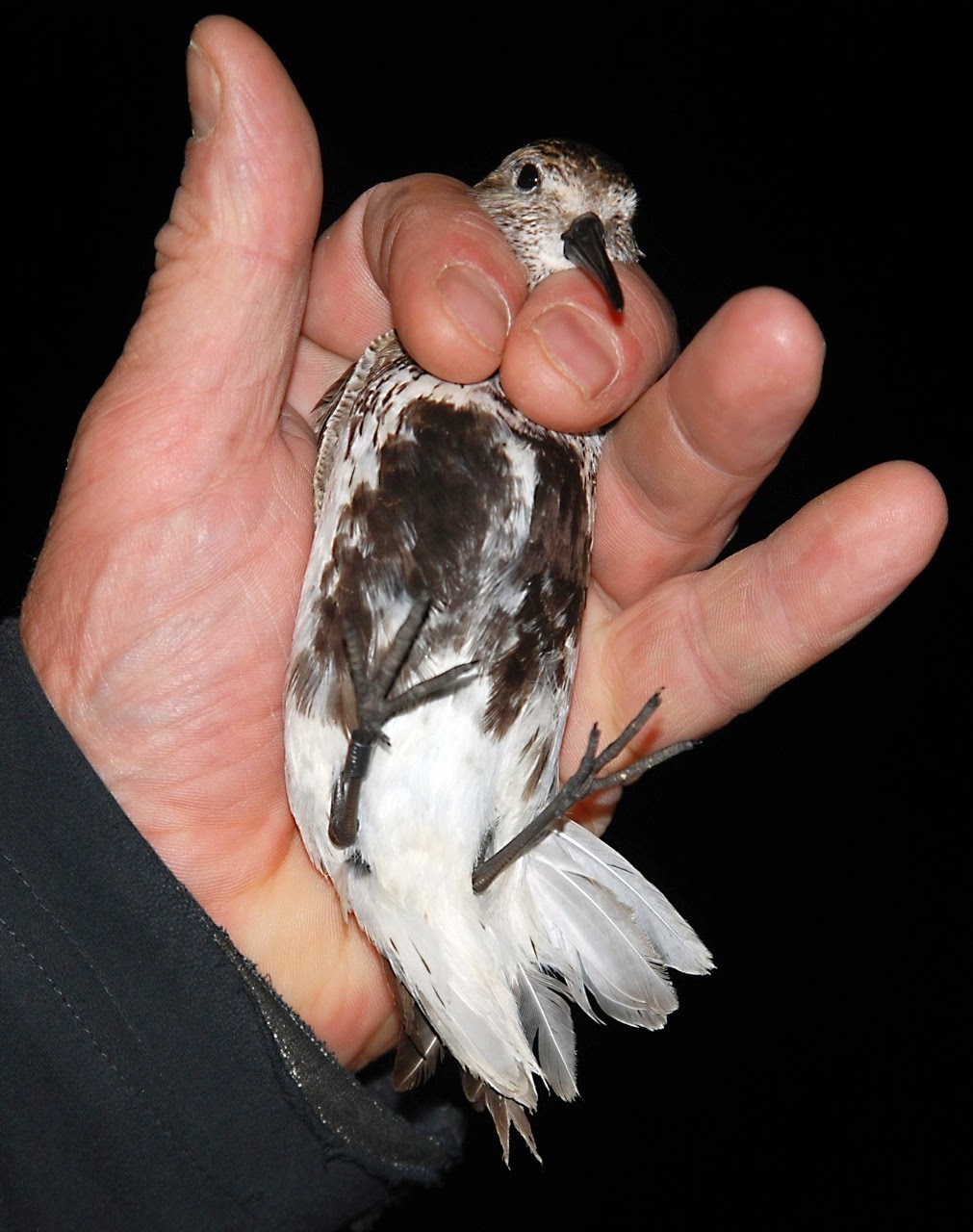 Last night Jane and I braved the massive tide and high winds to have a crack at lamping a few passage waders down at Ynyslas. There were a good number present, mostly Oystercatchers, Ringed Plovers and Dunlin but the wind and bright conditions were never going to favour a massive catch. In the end we managed a respectable 11 Dunlin (including 4 breeding plumage adults - we usually only catch juveniles in the autumn) and 3 Ringed Plovers. Hopefully conditions will be better on the new moon tides in a fortnights time. Made a nice change from Nightjars anyway! 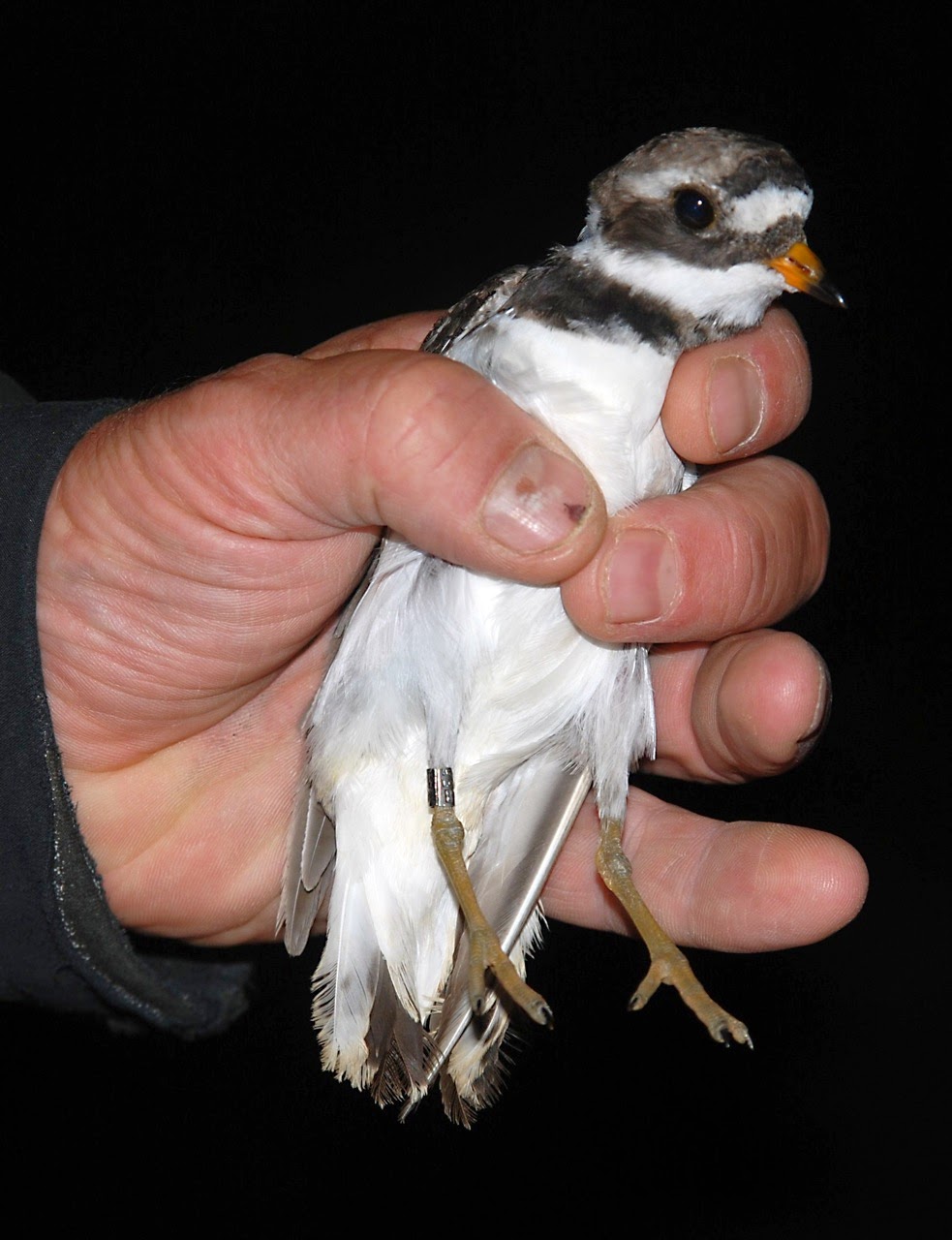 An adult female Ringed Plover showing the (relatively) new bling location on the tibia. Please check any dead Ringed Plovers you may find VERY carefully or you might miss them!! 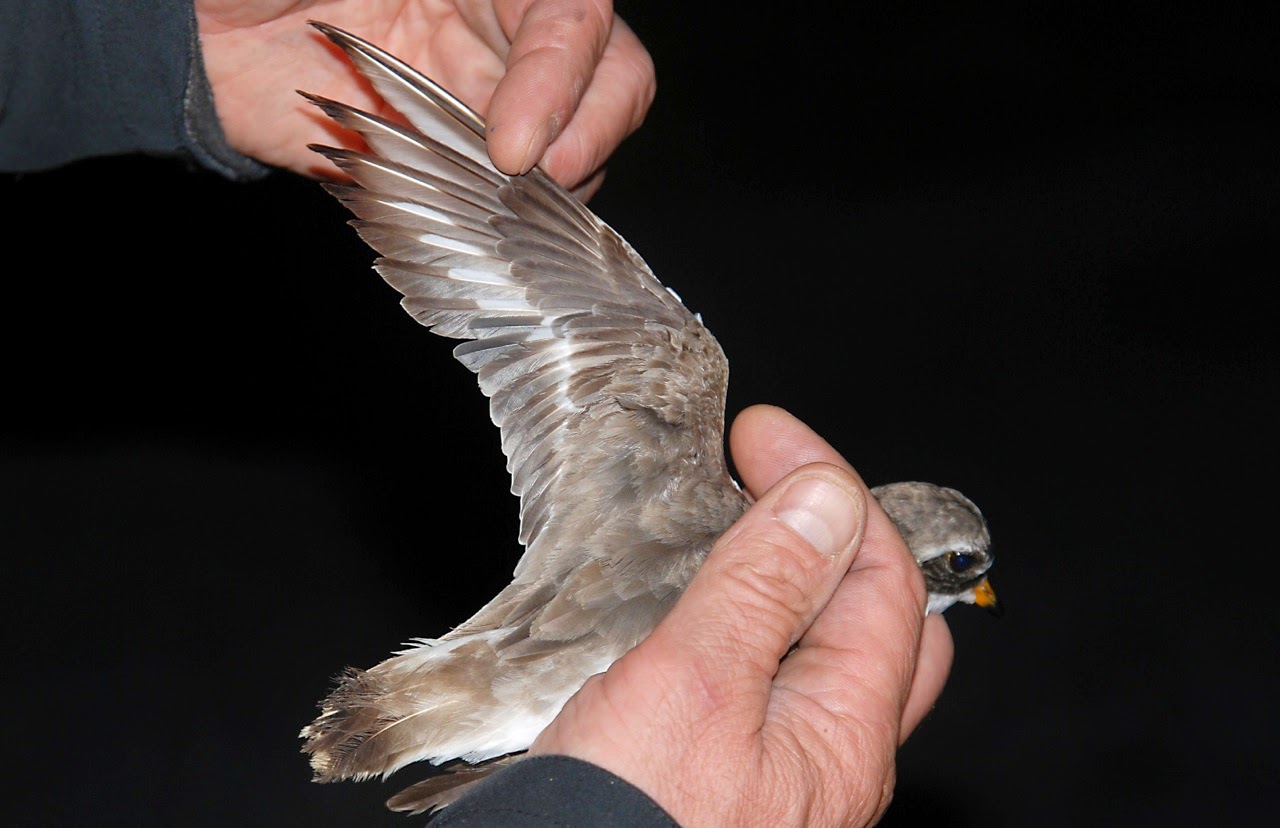 The same adult showing the early stages of wing moult in the inner primaries
Posted by Tony Cross at 16:01 No comments:

Quite amazingly, on Thursday night Dave Smith and I caught the 70th Nightjar of the season. 70!! The most I've ever managed to catch in a season before was less than half that number. The increased success is down to  a number of factors, an increased level of contract work leading to increased effort (I've only spent about 6 nights in a bed in the past 2 months!!), improved weather conditions and Paddy ringing on our rings. None the less it is an astounding achievement and one that I doubt we will ever manage to repeat in the future. 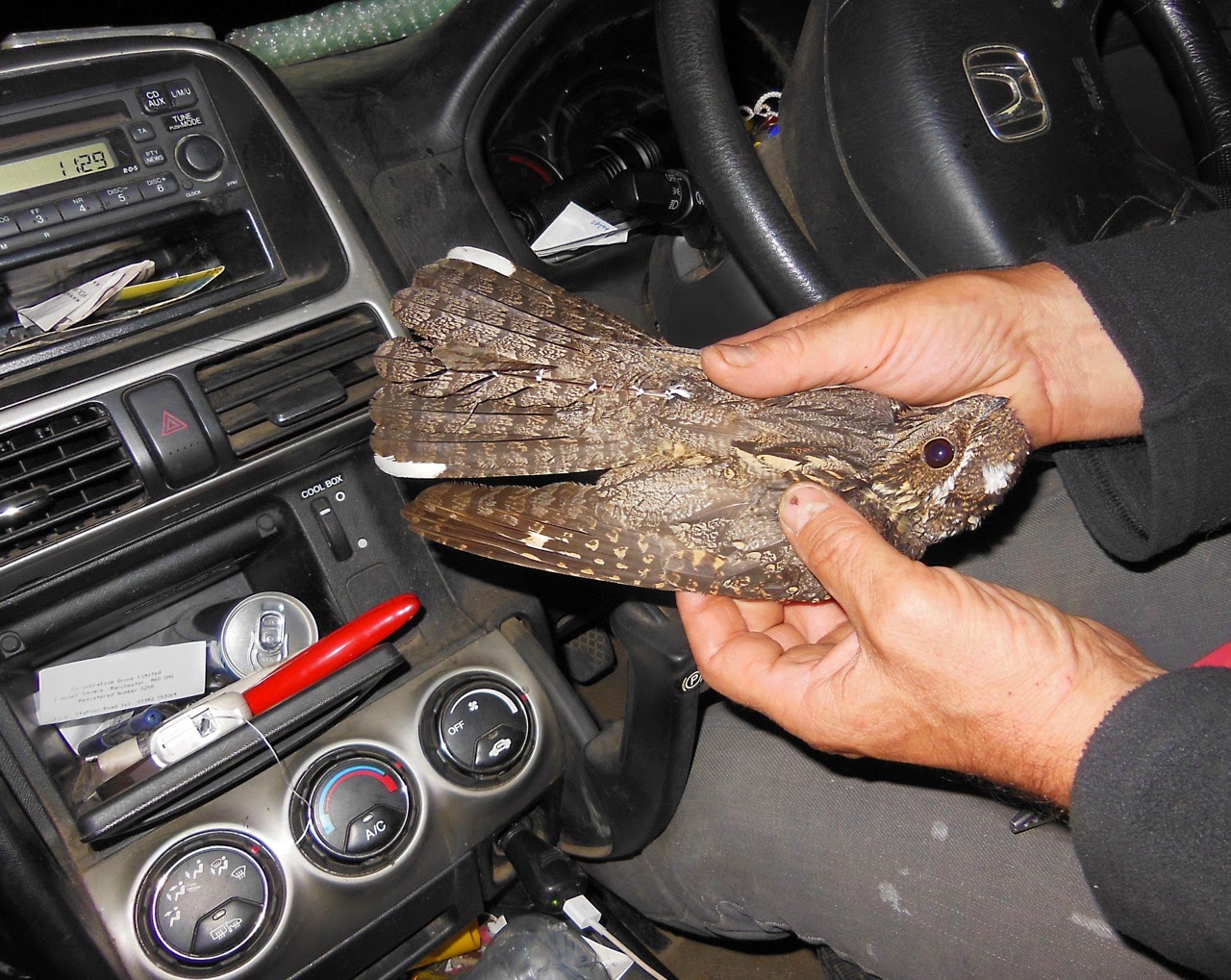 The 70 birds comprised 32 males (27 new and 5 re-traps from previous years), 11 females (10 new and 1 retrap), 8 juveniles and 19 pulli. We still have a couple of nests on the go and the possibility of finding a few more second brood nests or catching a few more second brood juvs still exists so the total may yet rise higher. Whilst getting foreign recoveries was never the main focus of this work let's hope we get one anyway as a fitting reward for all our efforts. 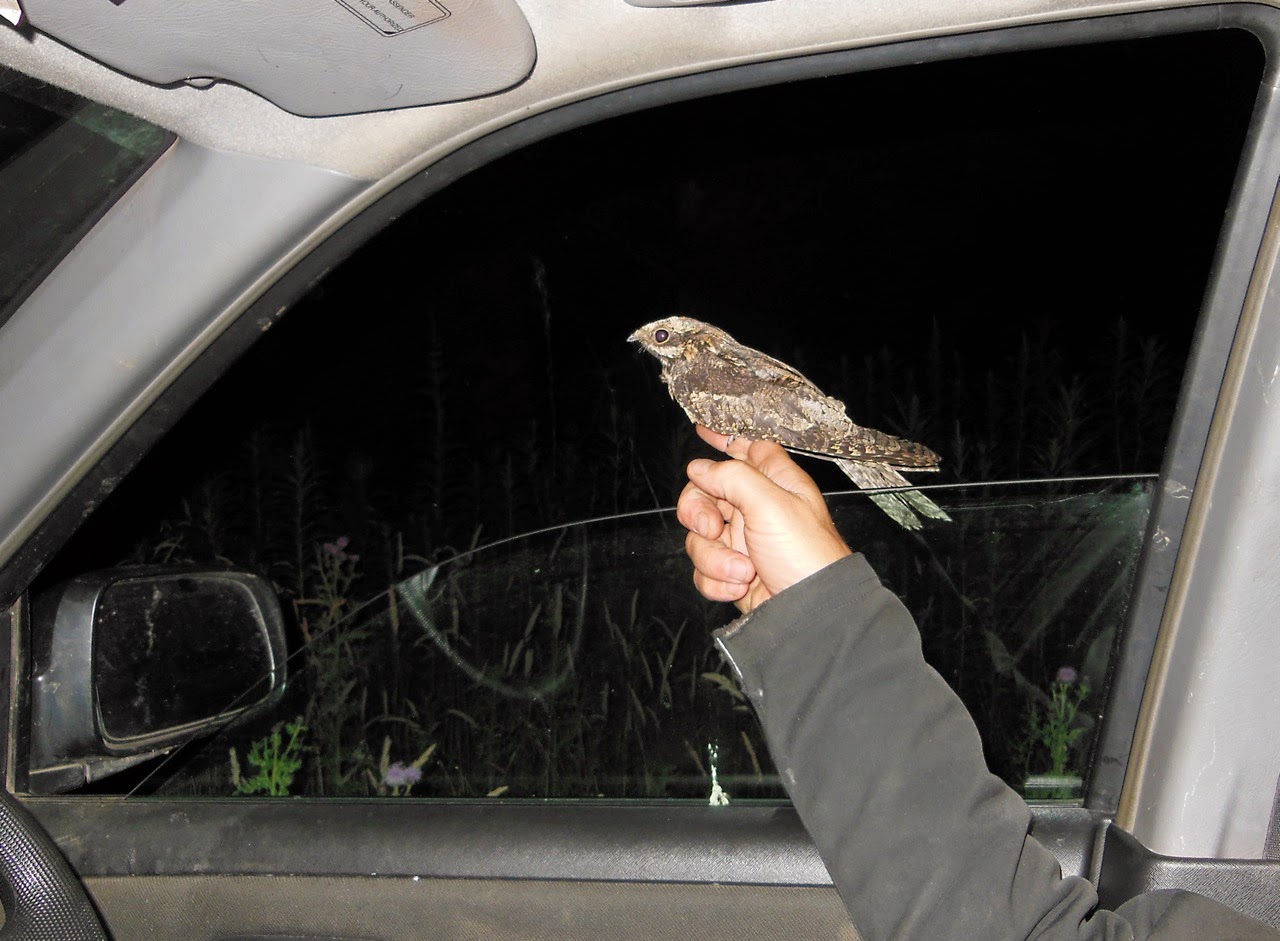 Juvenile Nightjar just prior to release

Nightjar recoveries, of any type, are few and far between though as detailed on the BTO Demog Blog recently so I'm not holding my breath! We have now ringed over 300 and are yet to be notified of our first foreign movement. I am currently investigating the cost and practicality of fitting a number of geolocators to birds in the future to increase the return for effort and to greatly add to our knowledge on their winter destinations.

Thanks to Paddy, Paul, Jane, Dave, Brendan, Damian, Paul Ashworth, Rob Sandham, Zac Hinchcliffe, Henry Cook, Chris Jones, Mike Shewring, Dan the `Eco man and Tansy (and anyone else I may have forgotten) for all their assistance and company in the between crepuscular hours.
Posted by Tony Cross at 23:00 No comments:

A couple of nights ago I got a phone call from my brother who runs a bit of a falconry display outfit called Feather Perfect and also rehabilitates a few wild raptors. They had been out on a call to recover a sick Kestrel from the side of a road in Shropshire and noticed that it had a ring on. 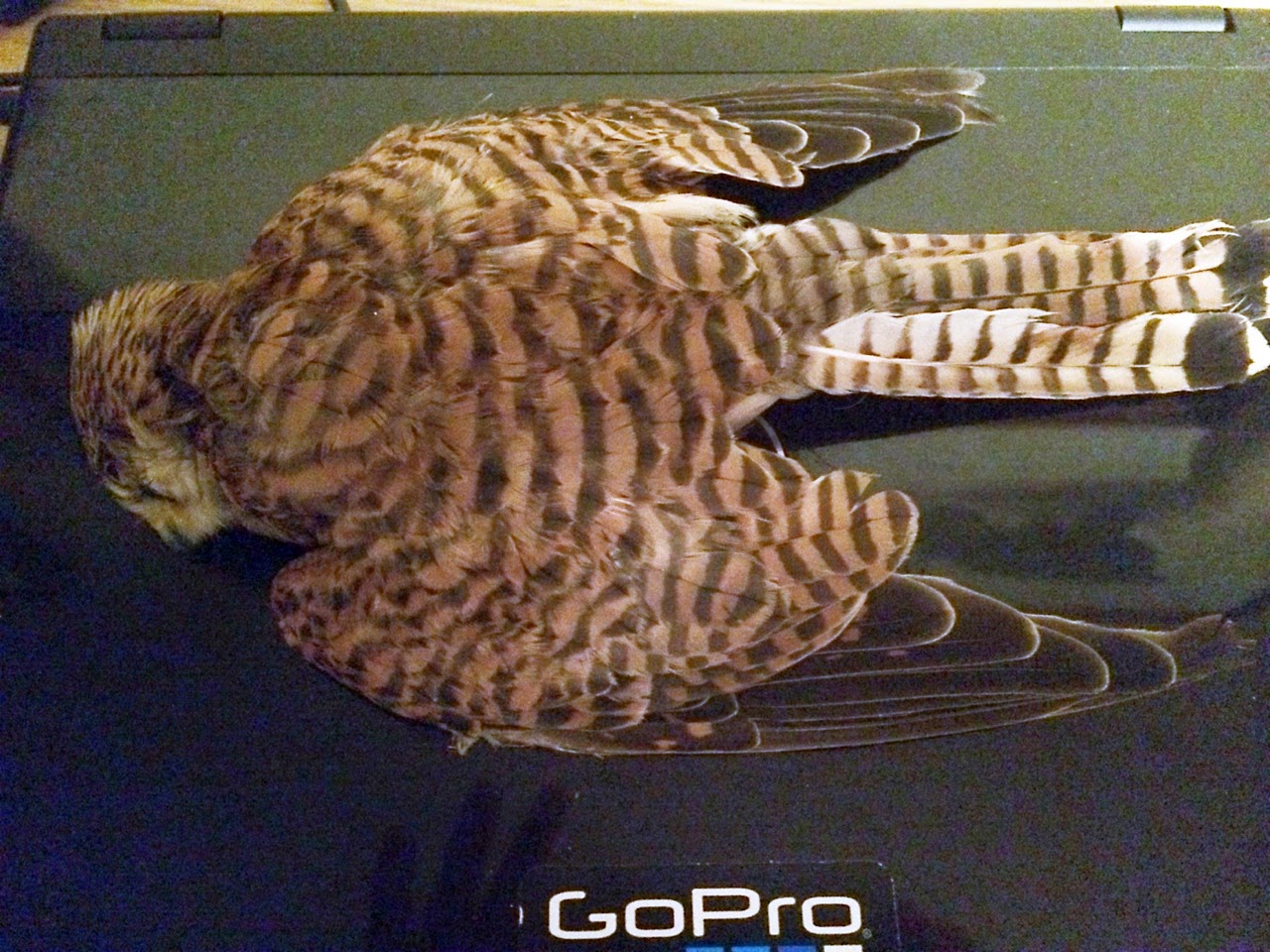 "Has it got a colour ring on as well"?

"No just a silver one"

"I doubt its one of mine then, what's the number?

"Eh? It should start with an E!  You sure its a BTO ring? What's the address"?

Blimey...! It's Swedish - what's that doing in Shropshire in early August!! 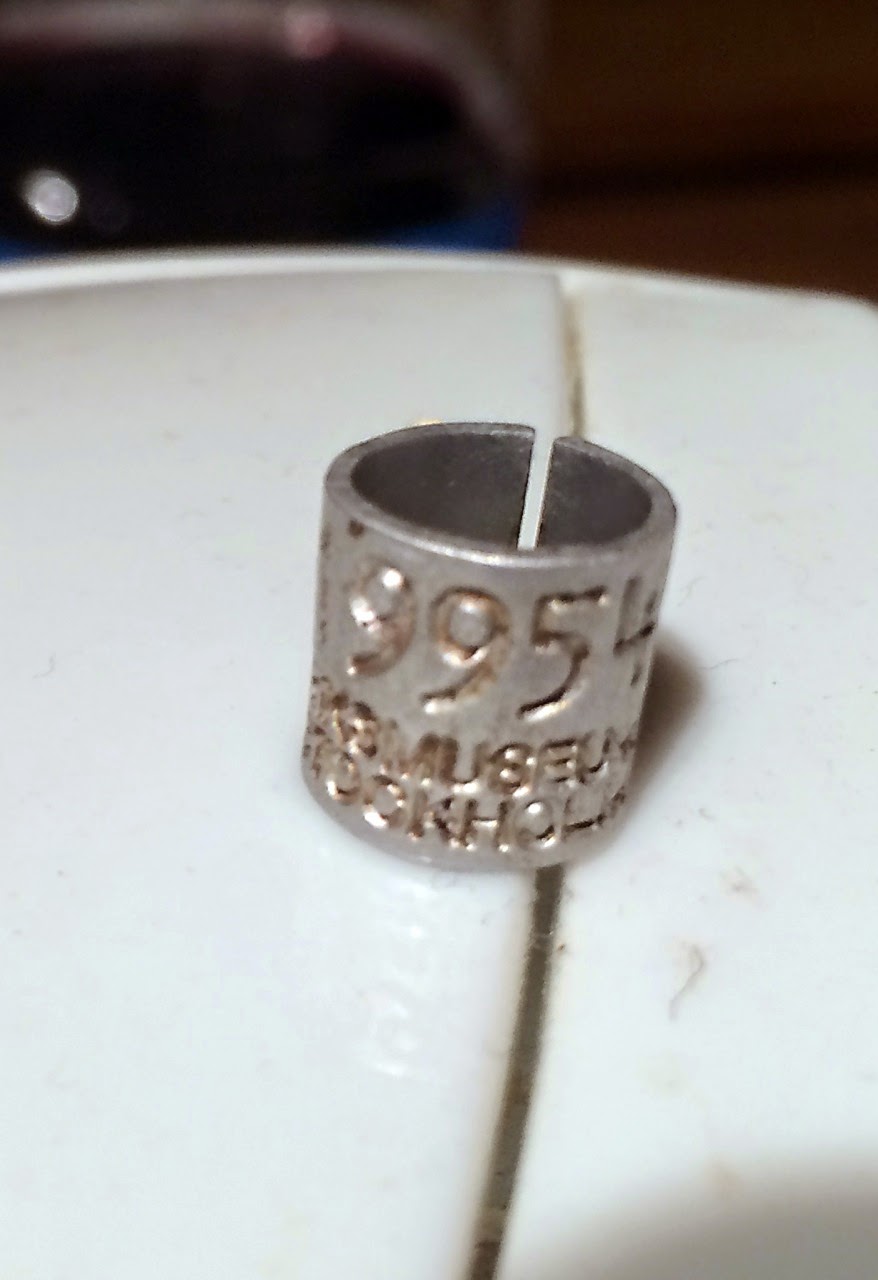 This episode just goes to show that no matter how much you think you might know you can still be wrong-footed by the origins and movements of birds.  Looking at the Online Ringing Reports on the BTO website it turns out that no less than 48 Swedish-ringed Kestrels have been recovered in Britain so far. It will be very interesting to see just where and when this individual was marked originally. Unfortunately it was very thin and in poor condition when found and despite being tube fed with rehydration fluids, died soon after collection.
Posted by Tony Cross at 18:29 No comments: