All this wind had to be good for something! 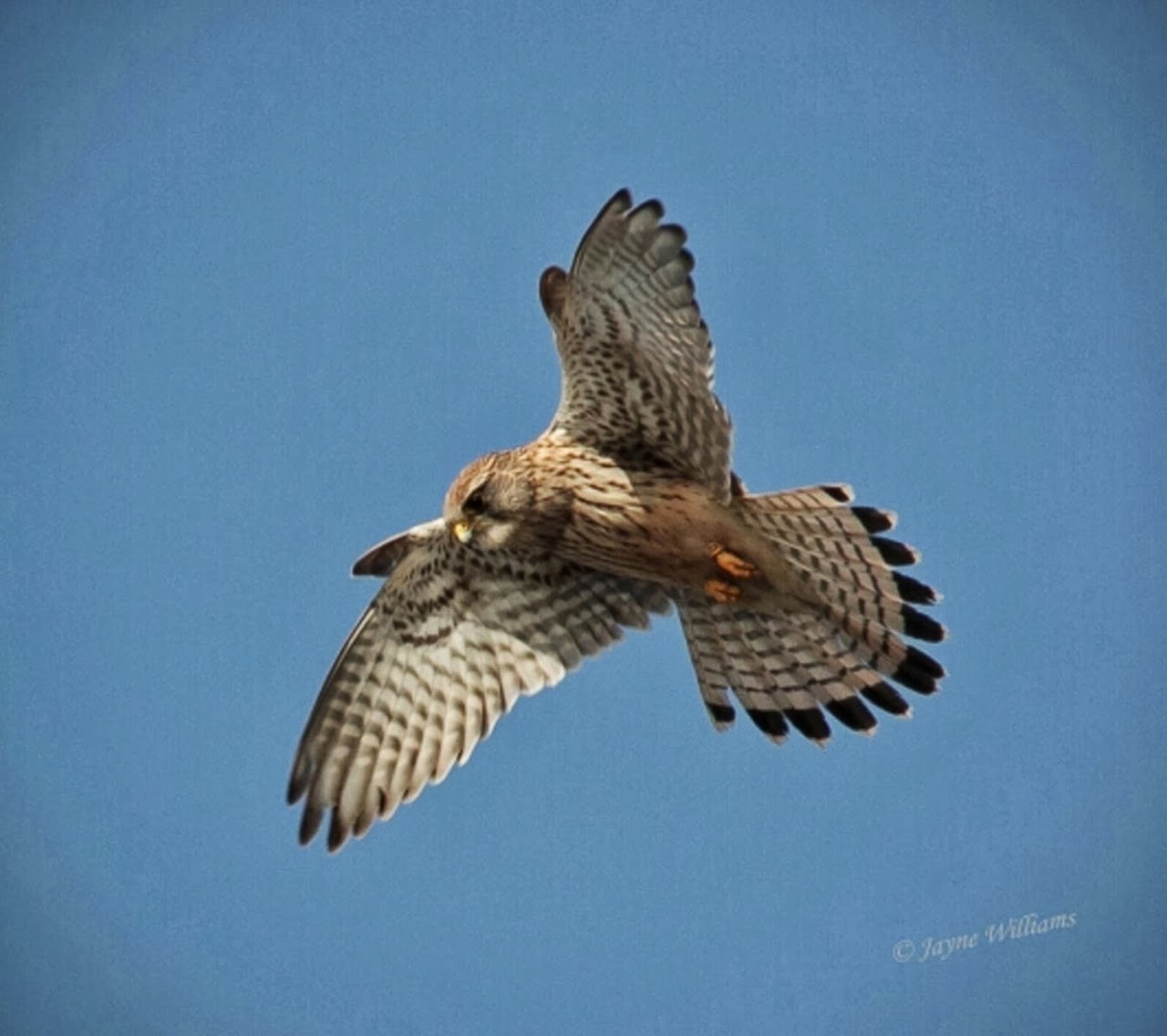 I recently received the above photo showing one of our colour-ringed Kestrels making good use of the windy weather at RSPB's Conwy reserve in North Wales. It was originally ringed on the Great Orme in July 2013 so she's not moved far but good to know she's still going, as, following fairly major declines in the population of this small falcon here in Wales over the past few decades, we need all the Kestrels we can get.
Posted by Tony Cross at 20:49 No comments:

Luck of the Irish with a Swedish beauty!

Last winter we were revelling in the rare opportunity to colour-ring Waxwings at Newtown. Exactly 100 birds were caught including one previously ringed on Fair Isle and then re-trapped in Aberdeen. Subsequent re-sightings of these birds during the same winter came from far and wide in the UK but also included one in Switzerland, the second furthest record ever of a BTO ringed Waxwing.

This winter the blogs have been largely silent on the subject of Waxwings as the mild winter has presumably kept them at more northern wintering locations. Confirmation of this arrived yesterday when Waxwing colour-ring co-ordinator Raymond Duncan forwarded me an email from Hans Petersson with attached photographs clearly showing one of the birds we had colour-ringed feeding on apples in his garden in Holmen Lane-Ryr, Uddevalla, Sweden. 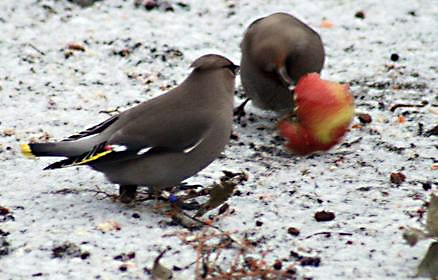 This bird was originally colour-ringed on 9th December at Newtown College and was one of those done by my Irish mate Damian Clarke on a flying visit. Guess there must be something in the old saying after all! 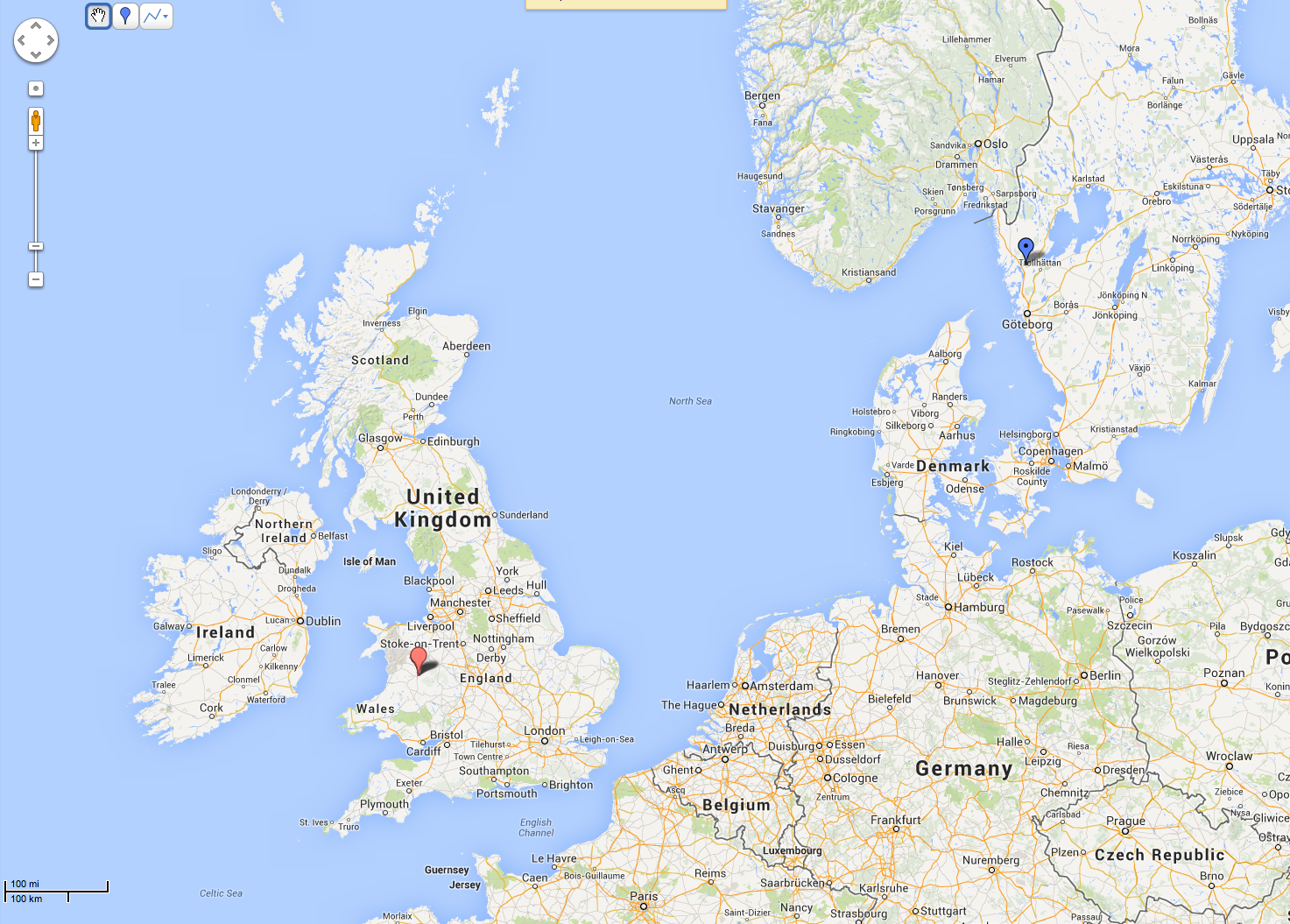 http://grampianringing.blogspot.co.uk/2014/02/waxwings-on-move.html
Posted by Tony Cross at 09:24 No comments:

There was a nice surprise this morning when I noticed this Redpoll feeding on the lawn amongst a flock of Lesser Redpoll, Goldfinch and Siskin. He stood out like a sore thumb, not only in colour but in size too. After rushing outside to open the net, all of the birds seemed to disappear for an age. But only 20 minutes later I noticed a lone bird in the bottom shelf, sure enough it was him.

With nearly 200 Lesser Redpolls ringed by myself and Tony in our gardens over the last 14 months, it was a species that I thought we would eventually catch up with. Hopefully the first of more to come! 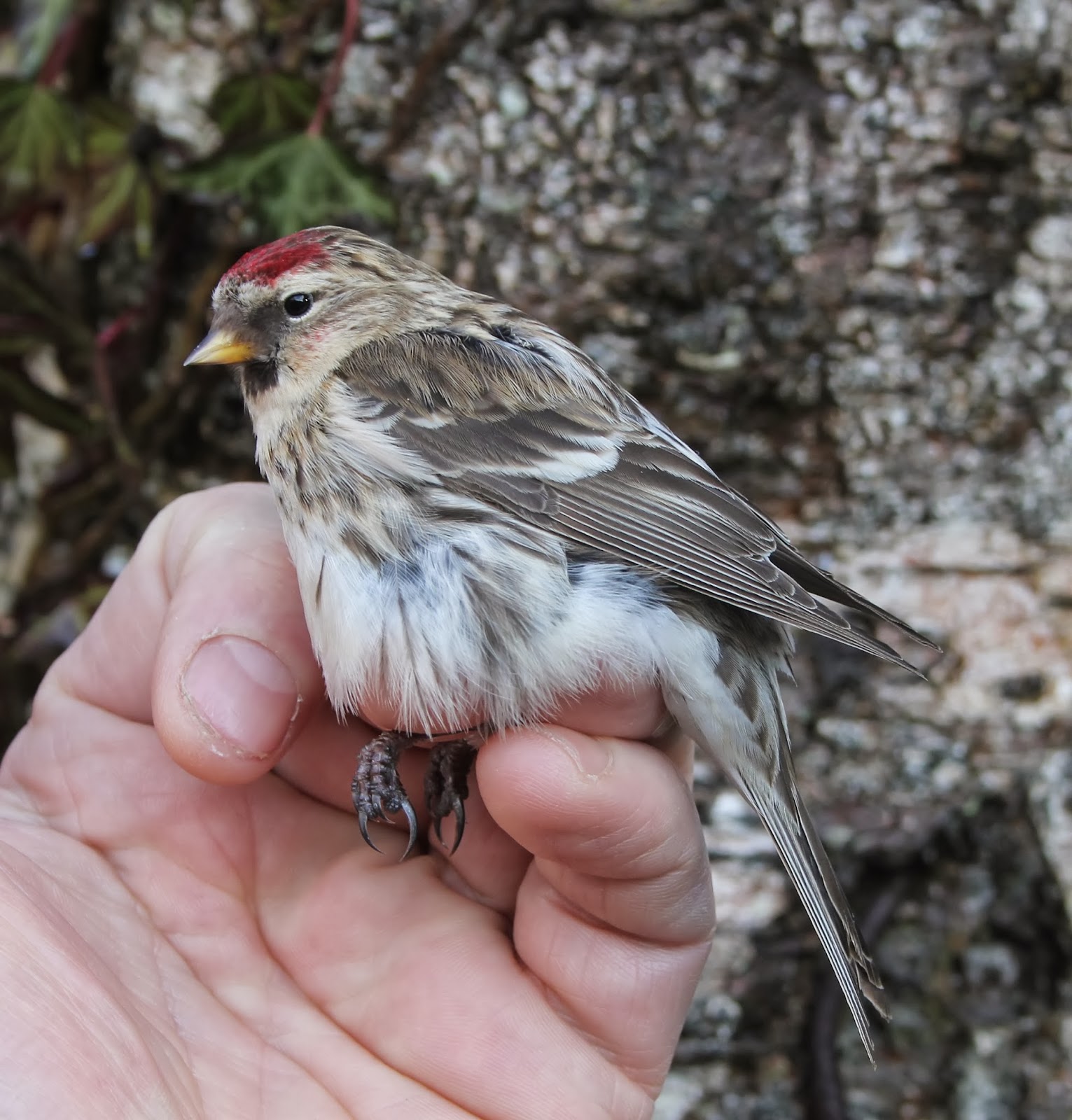 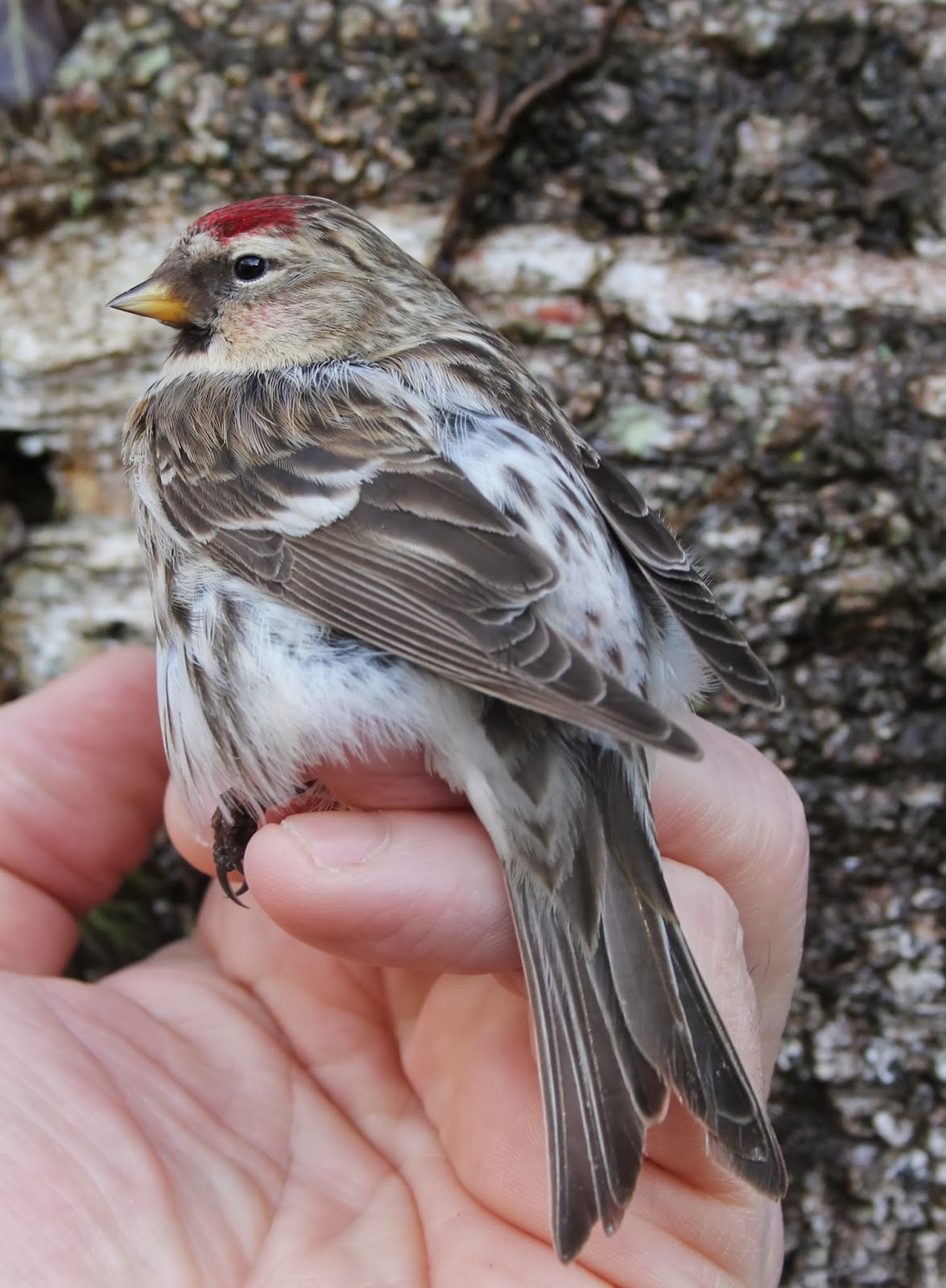 The two photos above show how obviously pale the Redpoll was, and the photo below shows just how much bigger he was than the average Lesser Redpoll! 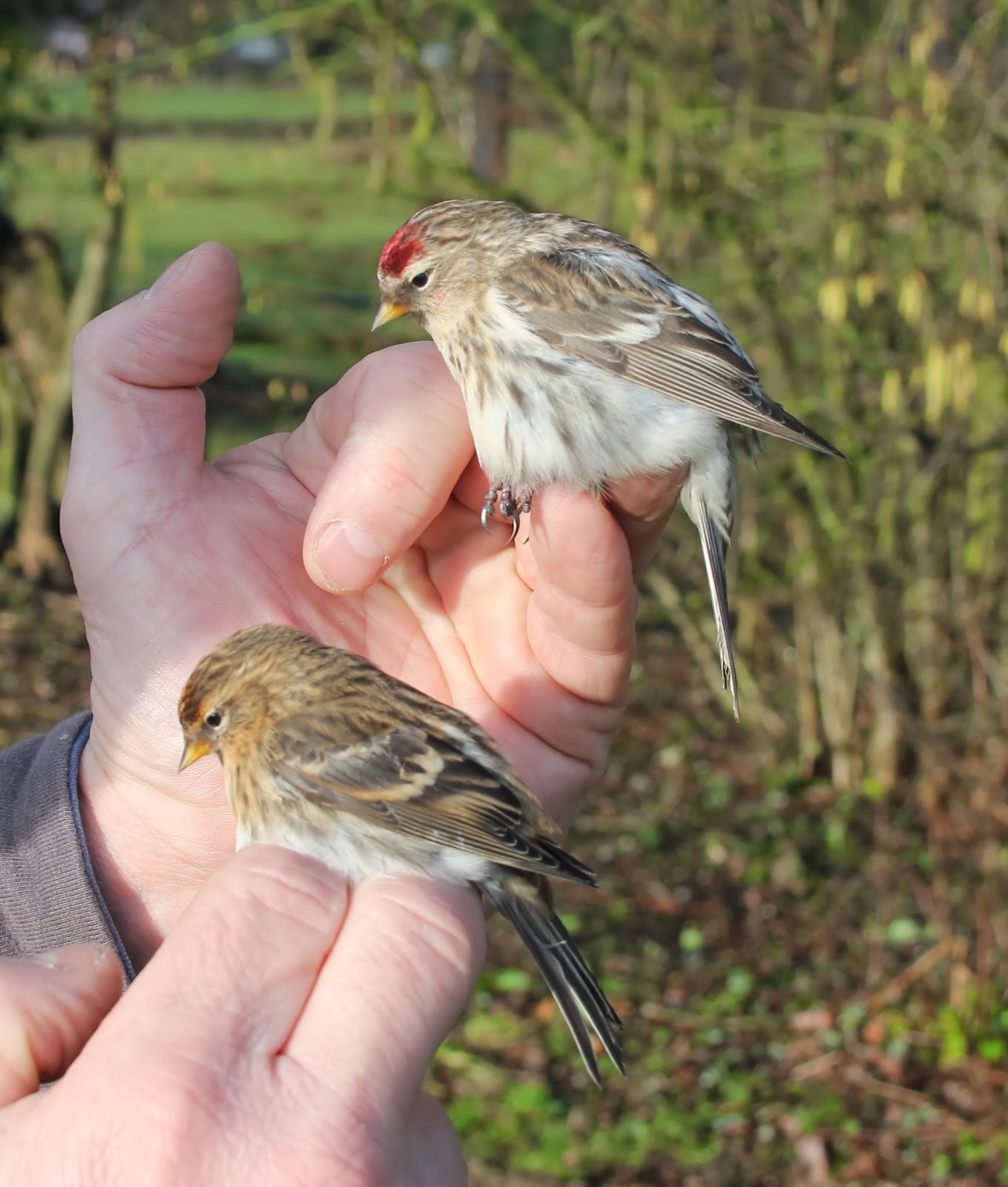 As if that wasn't enough, we also managed to catch some other notable birds today including 22 Bramblings and a Barn Owl!
Posted by Paul Leafe at 20:13 1 comment:

Last night I had planned to go lamping in North Wales with Dave Smith and then try catching Hawfinches first thing in the morning. At about 4 pm Dave text to say the weather was 'dangerous'. Now lamping can be good in wet and windy weather but dodging falling trees and flying roof tiles is a step too far. In an almost unheard of move I decided to cancel the lamping session and travel up first thing. It proved only slightly less dangerous though as I managed to lose control of the car in the snow on one bend which woke me up a bit!!

Since early February Dave has been feeding a traditional Hawfinch feeding site and this morning was our second attempt at whoosh netting some of the birds coming down to feed. 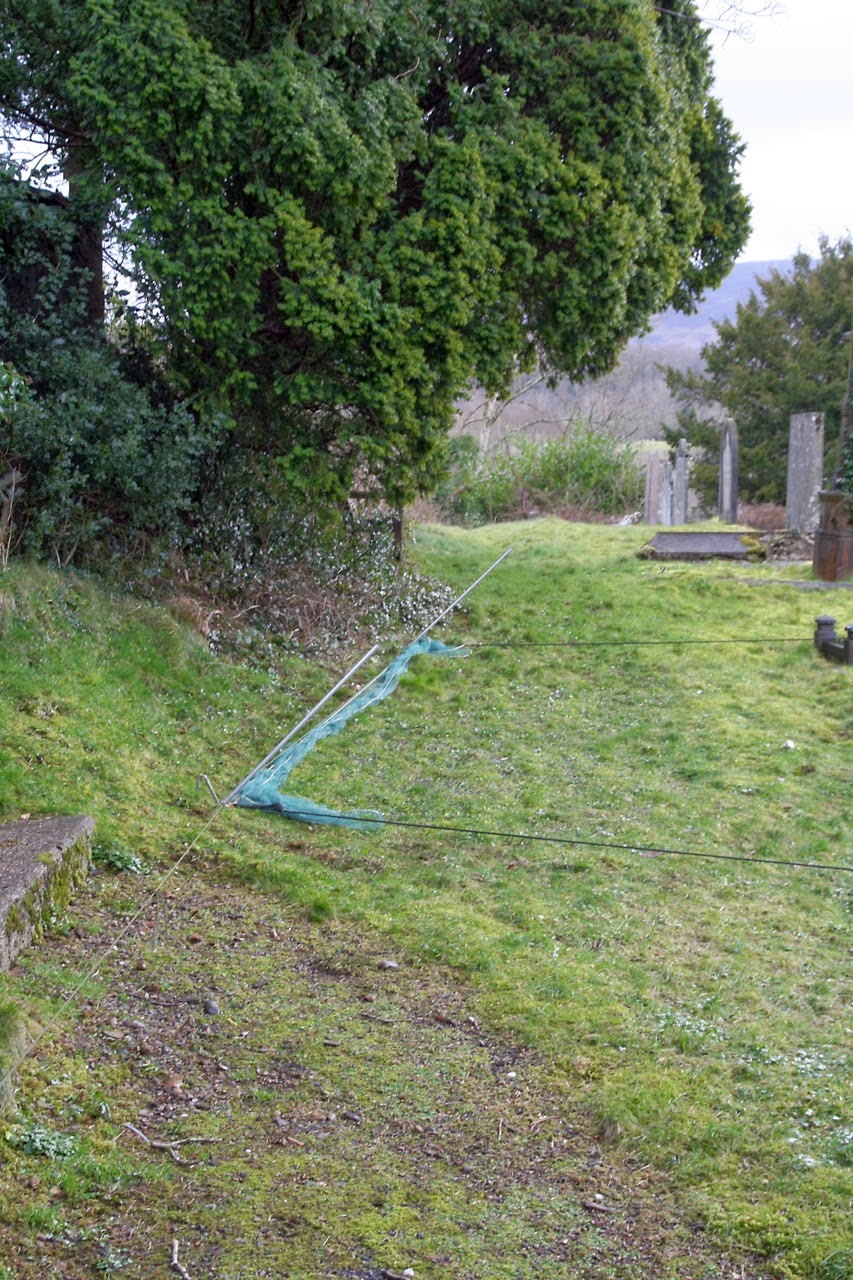 Our first attempt, about a week or so ago, proved fruitless when the net failed to fire, twice, on the only occasions we had birds safely sat in the 'zone'. Todays efforts were more successful and eight Hawfinches were caught comprising six new birds and two retraps from previous years. 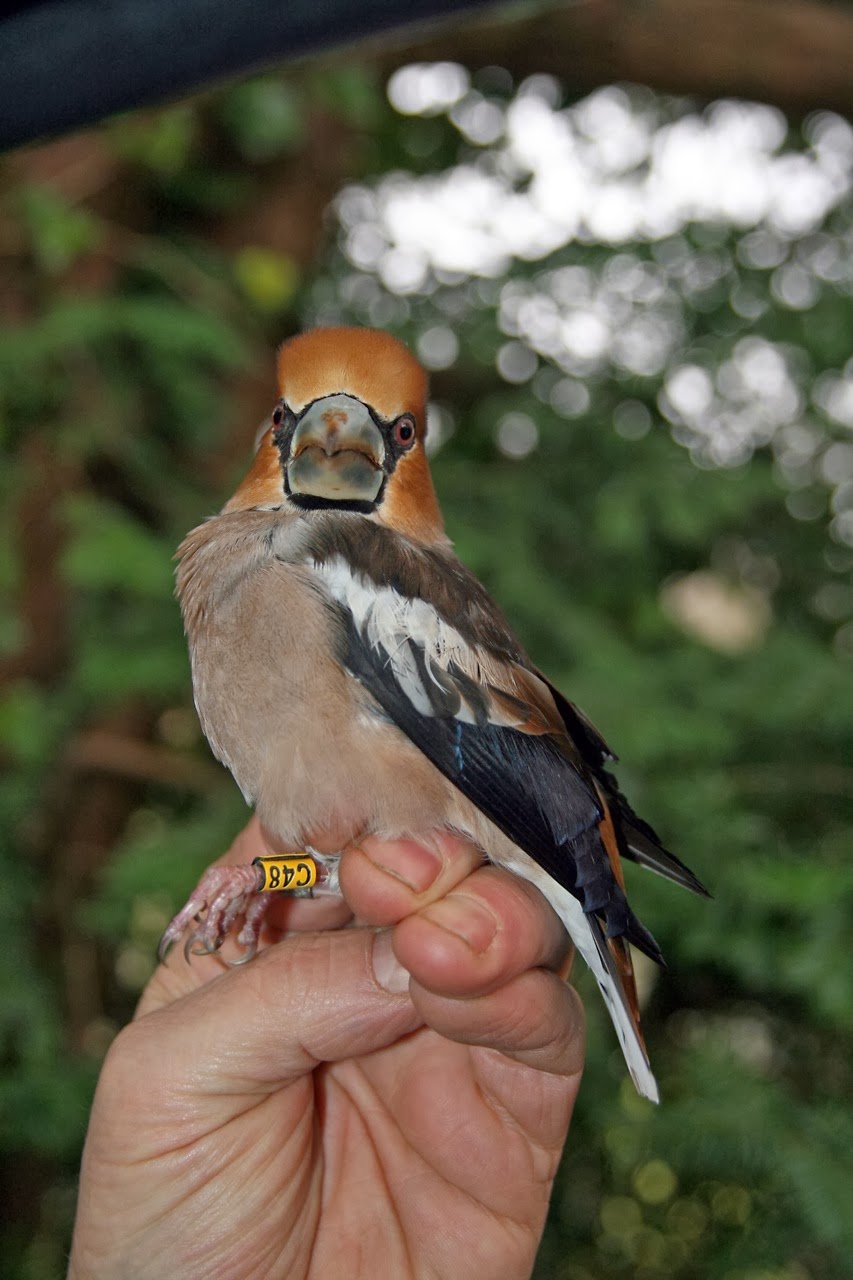 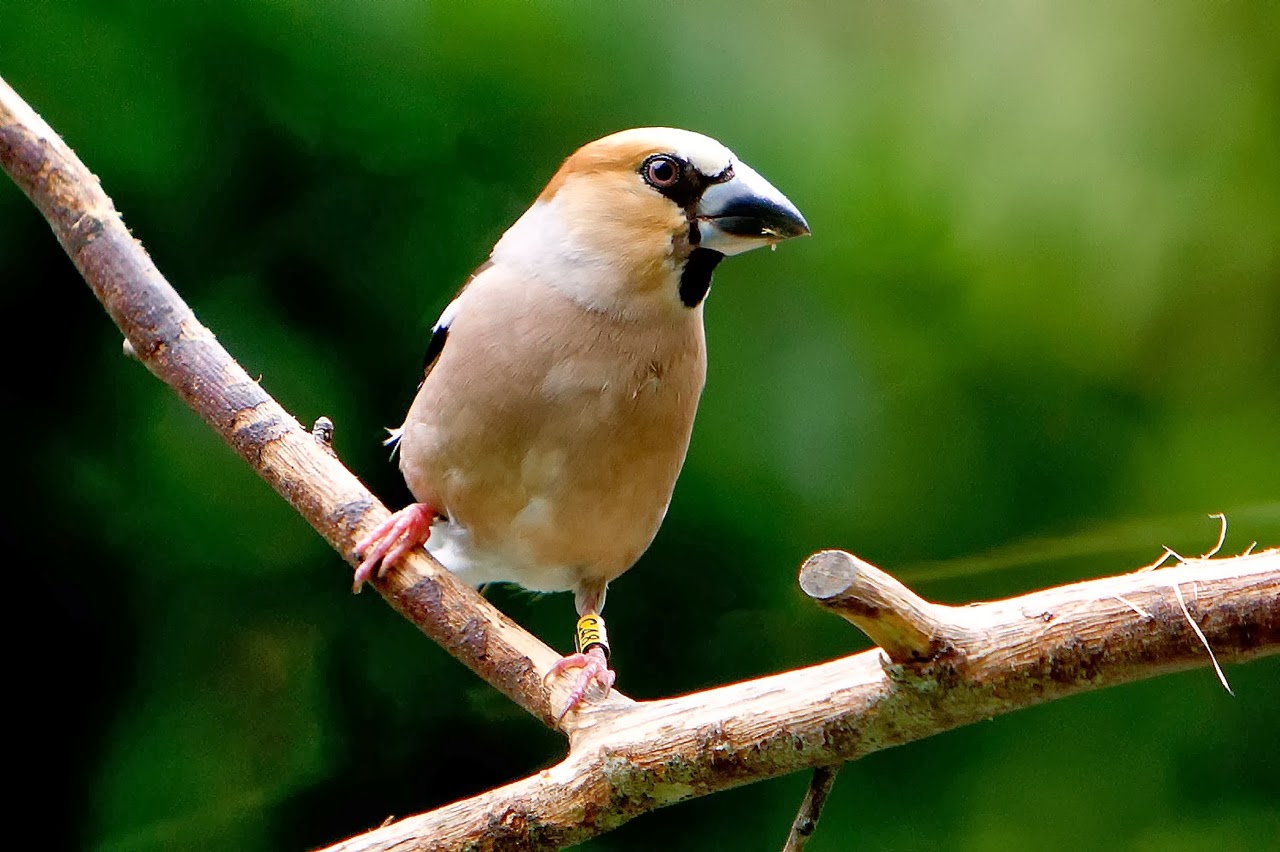 C48 in more relaxed mood, photographed by Suzanne Williams in her garden in Bontddu.

Also caught alongside the Hawfinch were six Chaffinch and five Greenfinch. On the way home I stopped off briefly at one of our Brambling feeding sites and added another six new Bramblings. Meanwhile, back in his garden in Crossgates, Paul managed to catch a few more Siskin, Goldfinch and Lesser Redpoll giving us seven species of finch ringed during the day! Now that doesn't happen too often, shame about the missing Bullfinch!
Posted by Tony Cross at 18:58 1 comment:

With the tail end of the 'beast storm" still hanging on and making it impossible to net the Redpolls, Siskins and Goldfinches in the garden I thought I'd pop over to one of our two Brambling feeding sites to see if the bad weather had made them hungry! Despite there having being lots of Bramblings present at both sites for well over two months now catching has been a bit slow to say the least. They've generally been none too bothered and clearly have other places to feed as frustratingly they'd often turn up, sit around for a while and then fly off again without coming down!  This morning was a bit different. maybe the natural food is running short or maybe it was the bad weather but they certainly seemed a bit keener on coming out of the trees and dropping onto the feeding area. Consequently, in just a couple of hours I managed to catch 51 in three pulls of the net, including 2 retraps and, more excitingly, a German ringed bird!!  A good number of Bramblings are ringed on the continent so we've been expecting a 'foreigner' for a while but this is the first from over 250 Bramblings caught so far this winter. 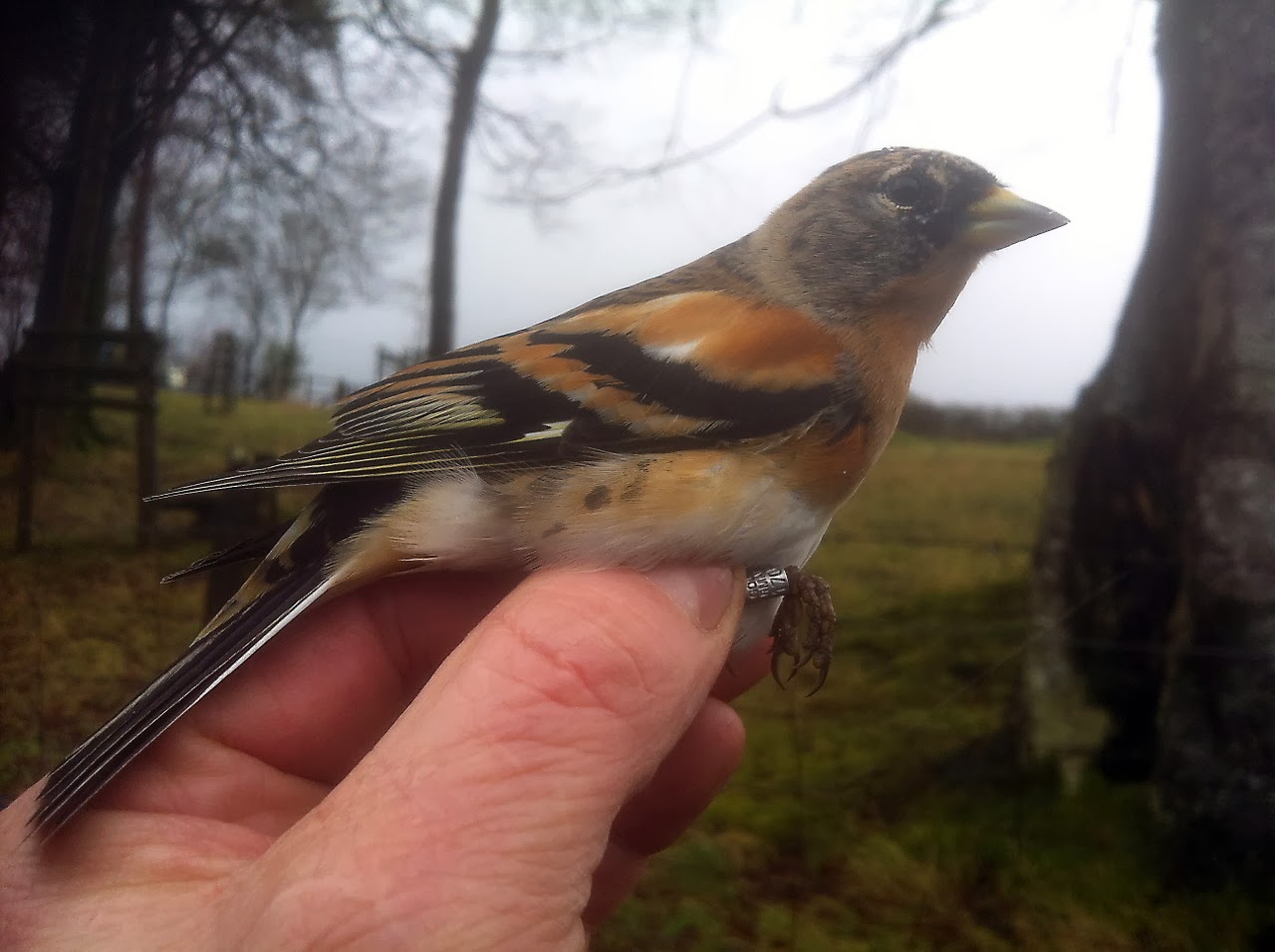 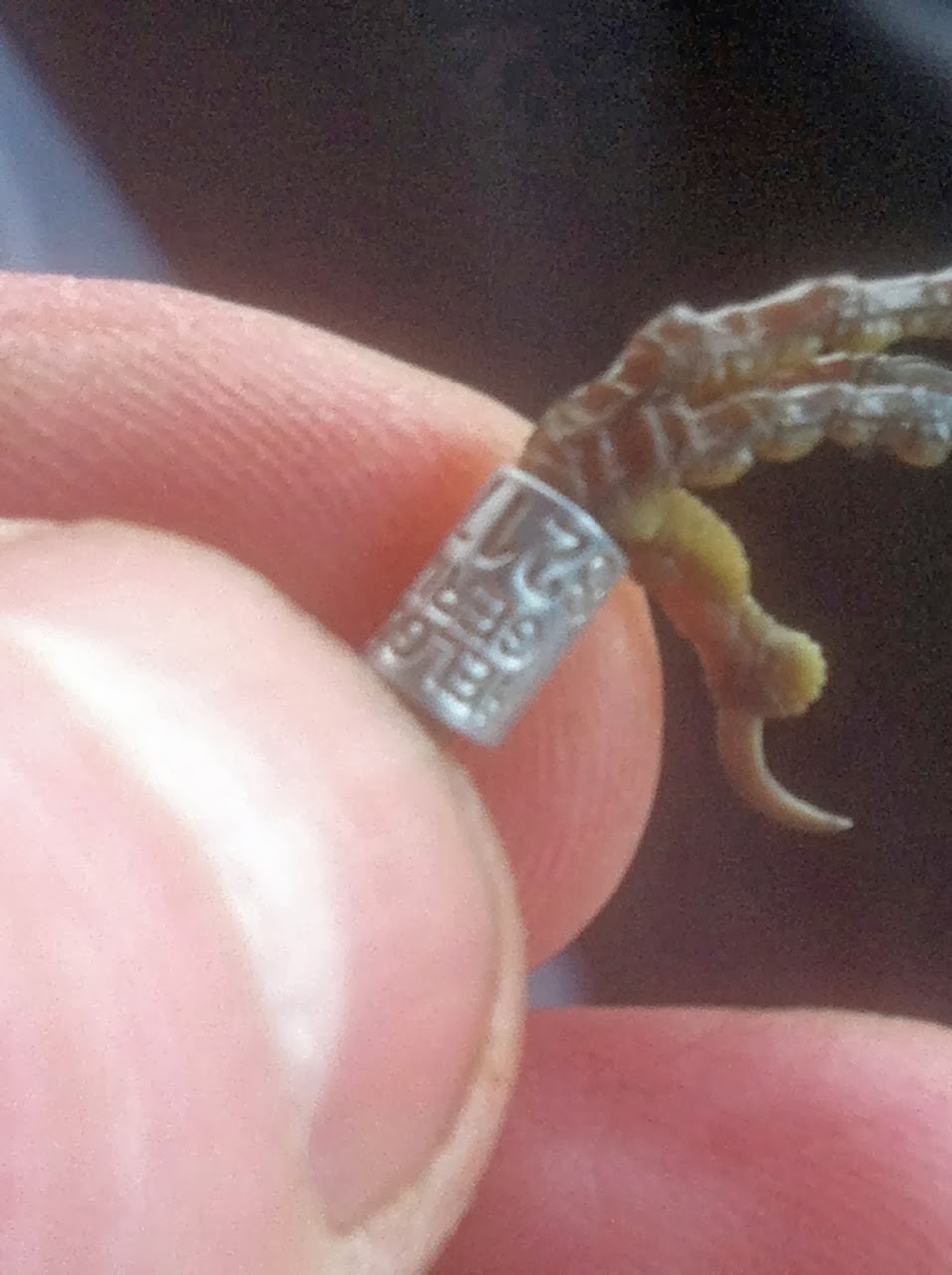 Lets hope we don't have to wait too much longer for the next one!
Posted by Tony Cross at 15:55 No comments:

Last Sunday there was a meeting of the BTO Welsh Regional reps in the Elan Valley. Travelling up for the meeting from Norfolk were Breeding Bird Survey National Organiser Kate Risely and Senior Research Ecologist Dave Leech. As there's not a lot else in these parts to keep visiting birders entertained on a cold, dark and wet January night they had arranged through Kelvin Jones to come lamping.  The night, as it turned out, was very wet and windy and as I made my way around the first site with Dave and Kate shadowing me behind the beam it looked as if it was going to be a bit difficult living up to the standard set on Kate's previous visit when we managed to ring 5 Woodcock, 5 Dippers and a Long-eared Owl!

Returning to the car empty handed having seen just 4 Golden Plovers and a few Snipe things looked a bit grim. Lucklly Paul, who had lamped the other half of the same site, was sat waiting in the car with an unringed Jack Snipe in a bird bag when we got back. 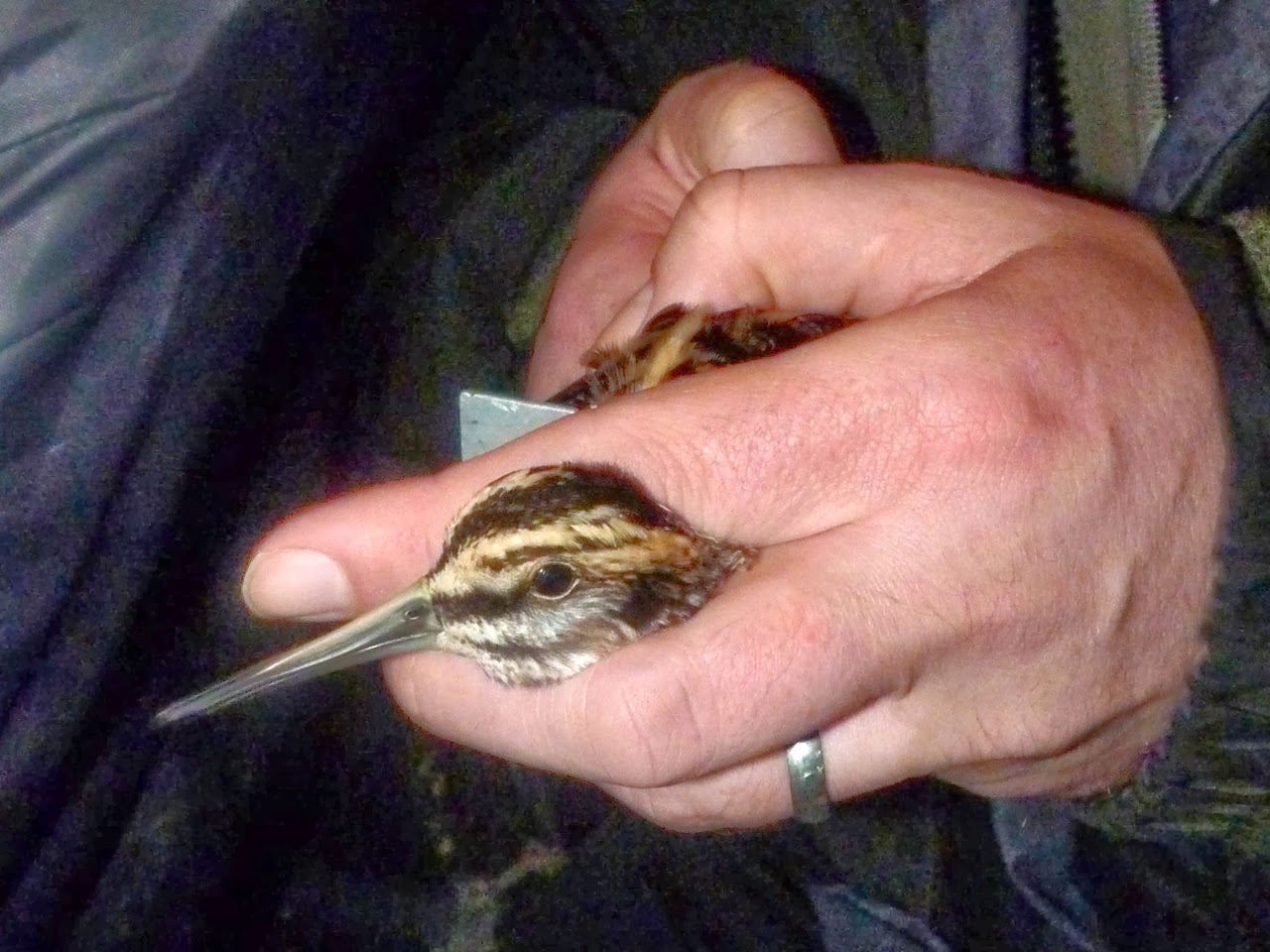 Moving on to another site nearby we again split up. By now the rain was driving pretty hard and there was surprisingly little present. This can happen at any time but particularly if a fox has been round the field just prior to your visit. Despite this we did manage to catch 2 Snipe and a Meadow Pipit between us. 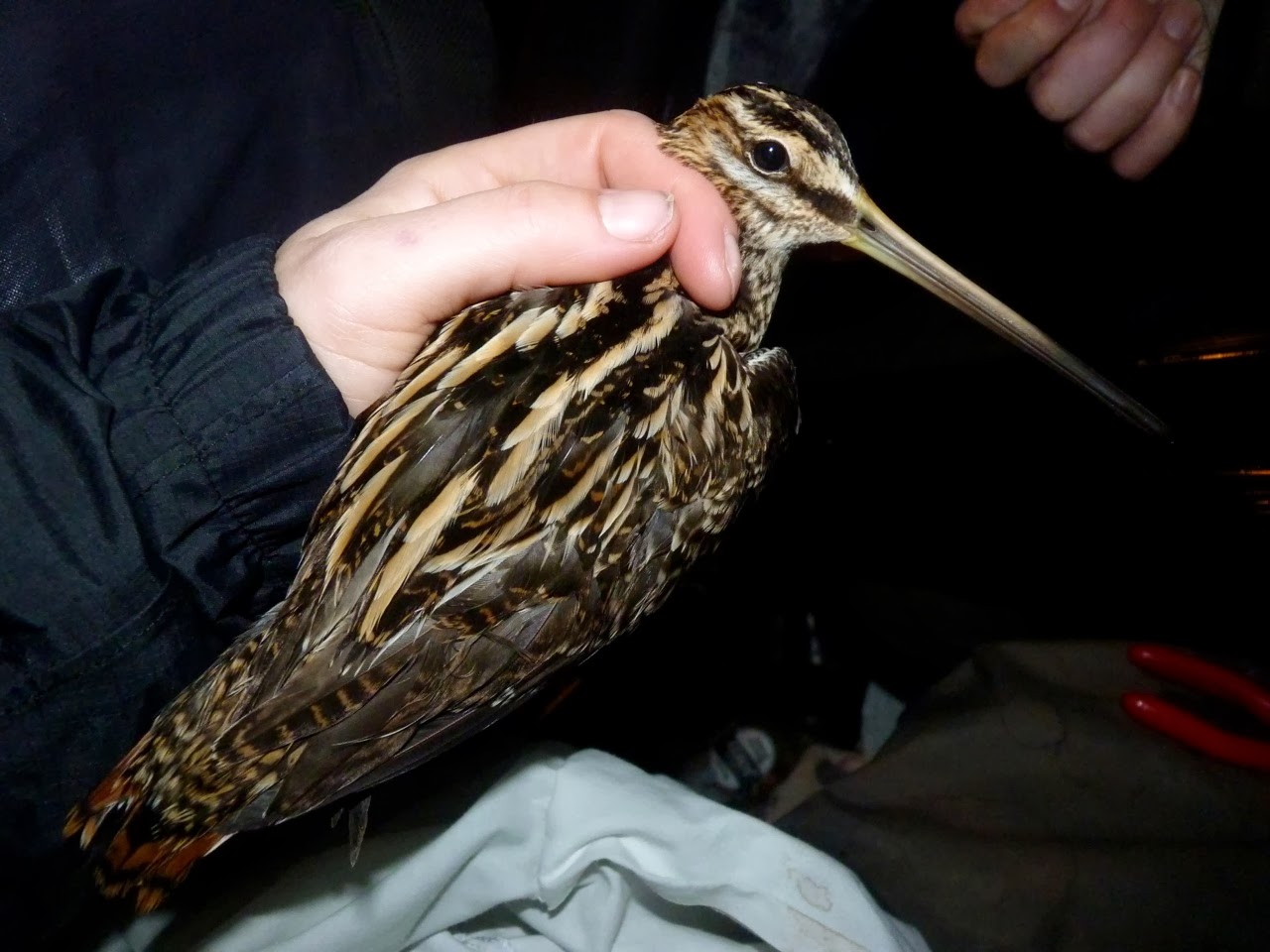 As Paul, Dave and Kate ringed and processed the Snipe and Pipit I had a quick look in another field nearby which doesn't usually have much in it but amazingly 2 Woodcock were sat just a few yards from the car and despite the rowdy shouts of a few, well lubricated, passing youths, were soon being passed through the window to a couple of well satisfied visitors. Hat-tricks are usually pretty hard to come by but this winter they have been arriving thick and fast. 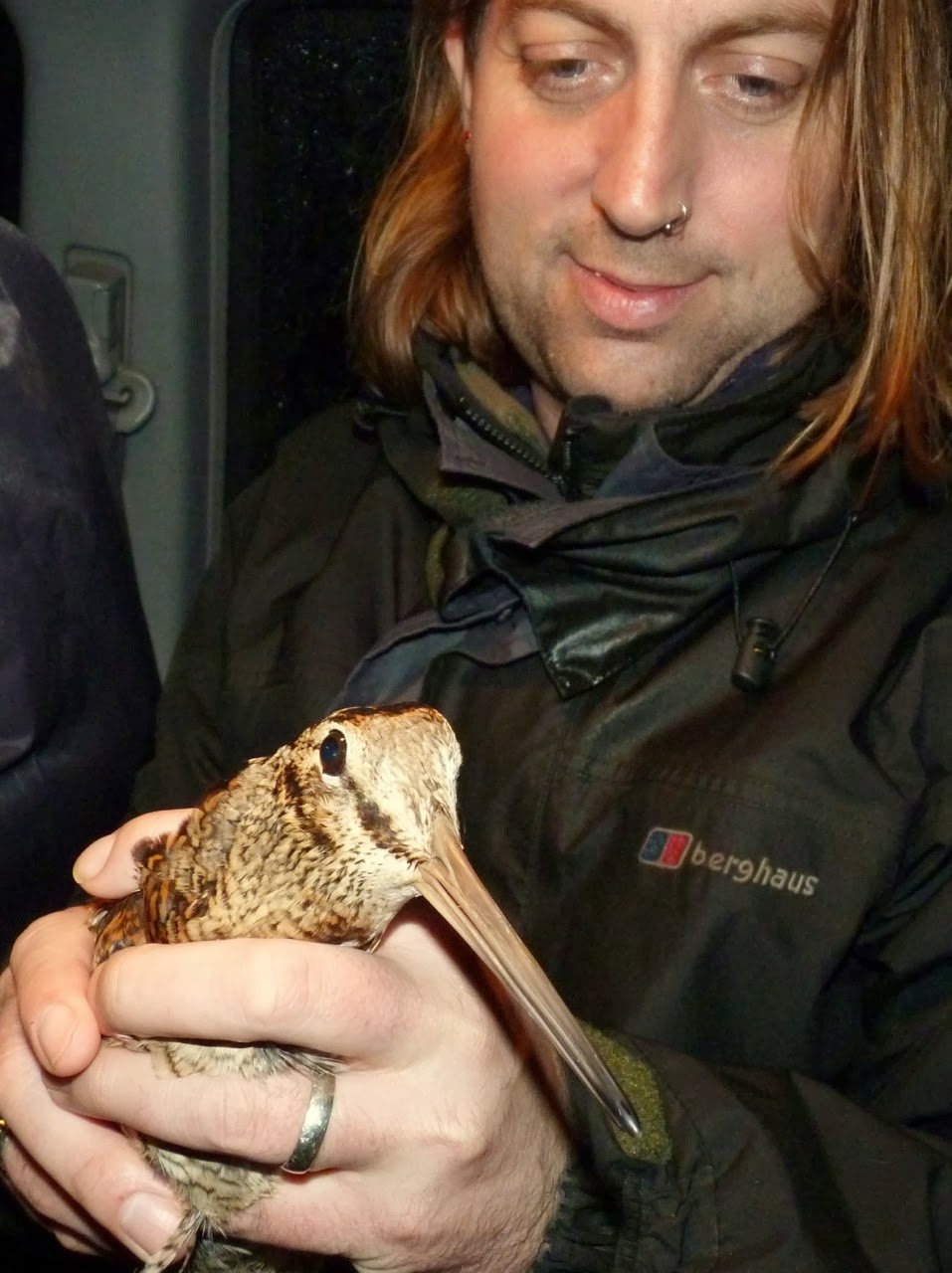 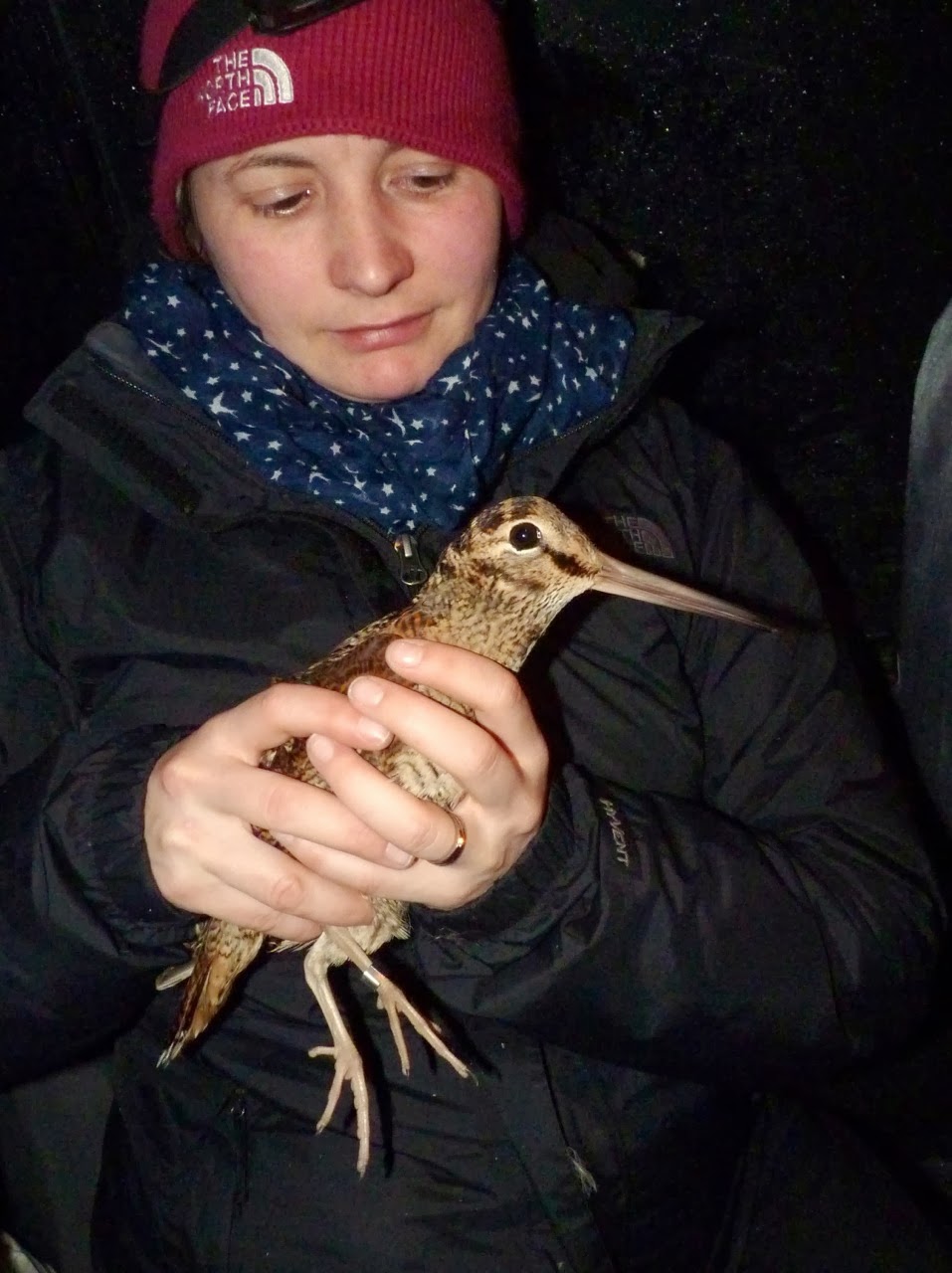 It is always good to meet up with like-minded devotees (even if the target species differ!) and to exchange stories and ideas. Many thanks to Dave and Kate for a great night and for the photos (despite all the well-planned product placement!).
Posted by Tony Cross at 14:56 No comments:

Last night Tony and I headed out lamping, but instead of heading for the hills we went to a small pool where we were hoping to catch some of the 20 odd Little Grebes that spend the winter there, and whatever else we could get our hands on.

Catching them proved to be a little more challenging than previous attempts, and it didn't look like we were going to catch anything for a while, so when we managed to catch 3 Moorhens we felt that the trip was justified. 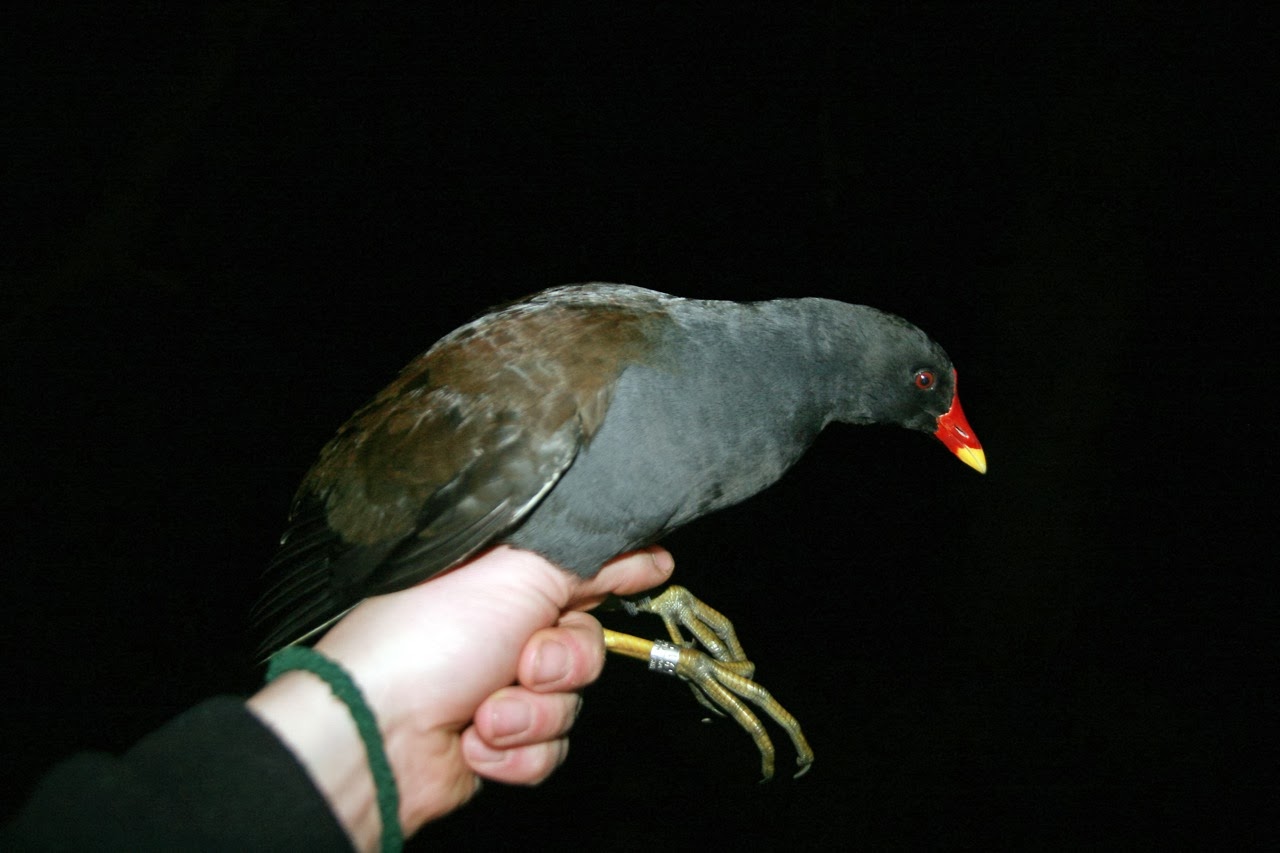 Not ones for giving up, we tried our luck for a while longer and were eventually rewarded with a Little Grebe. Knowing that less than 2,000 of these little beauties have ever been ringed in the UK, made falling in the cold water (twice) seem completely worth it! 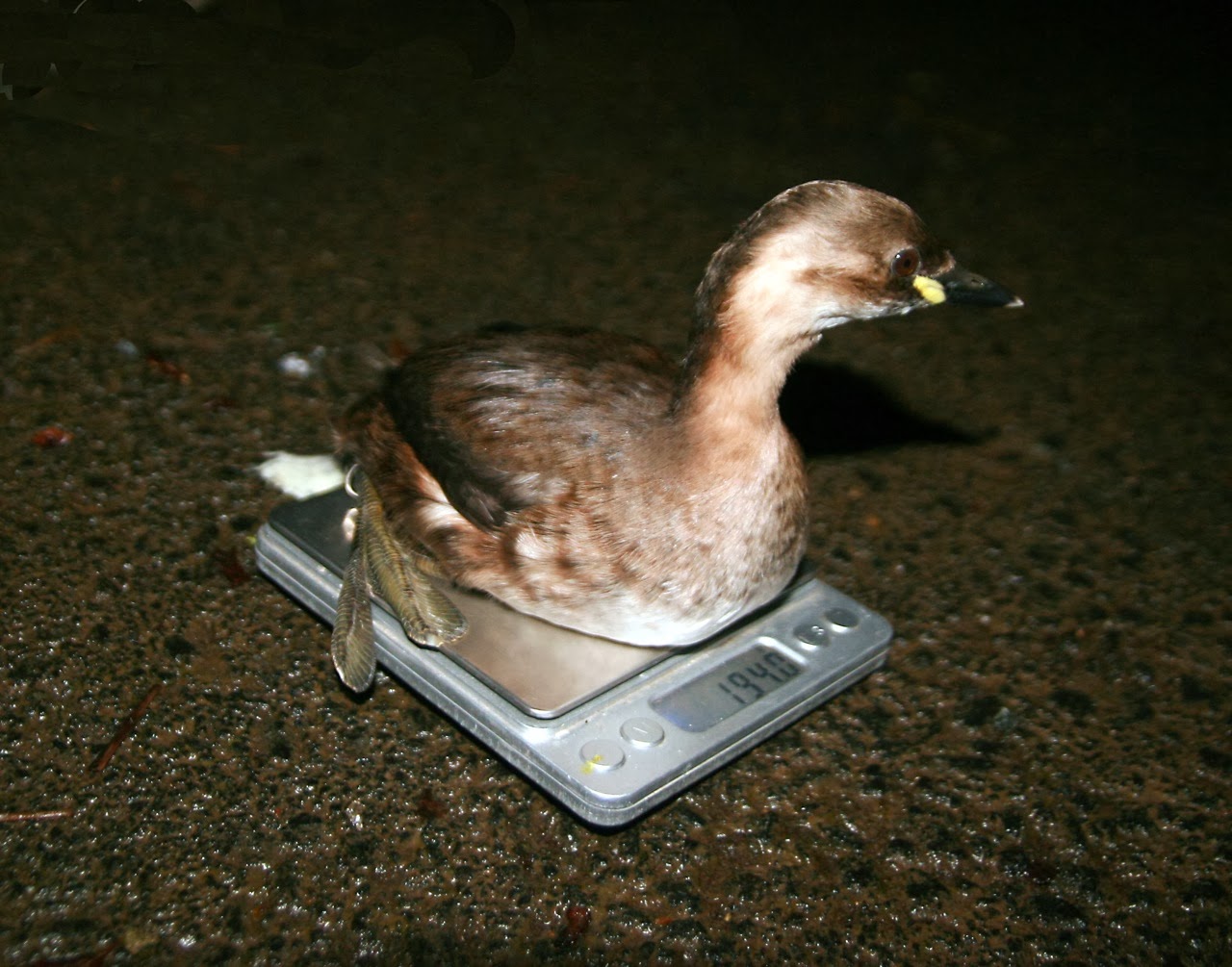 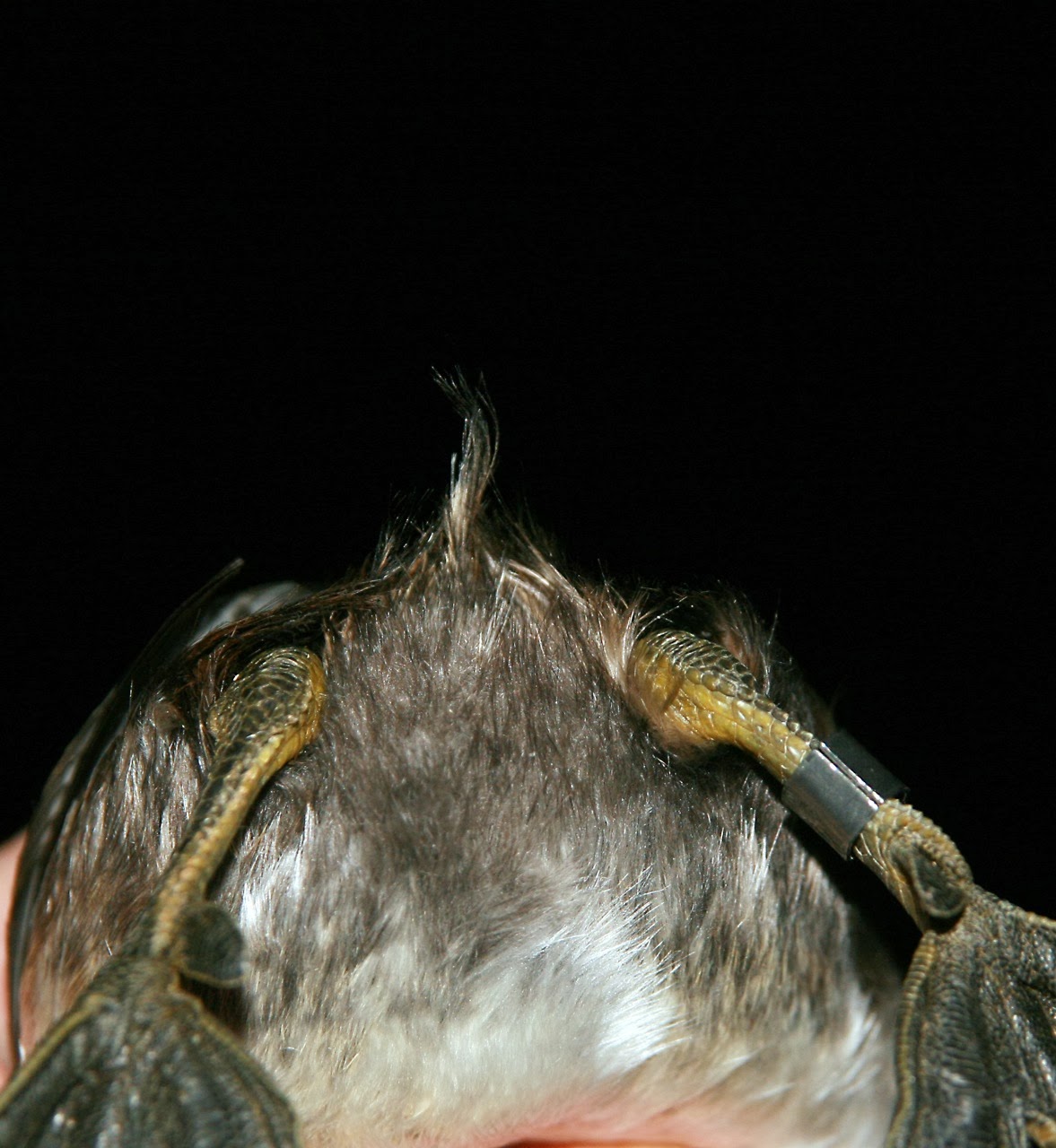 Is there a more pathetic excuse for a tail in the bird world? 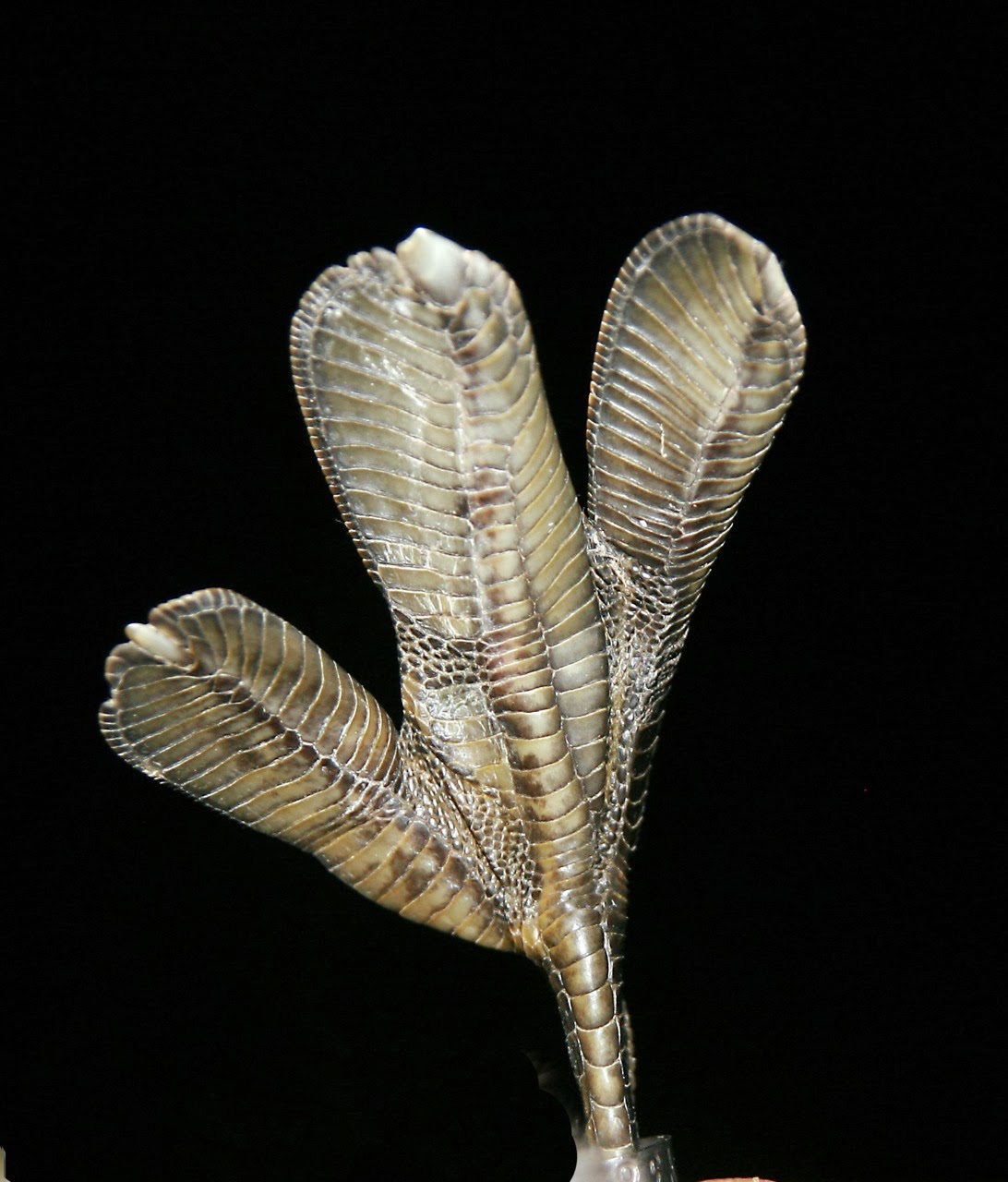 and that's what you call Flat-footed!
Posted by Paul Leafe at 21:13 1 comment: