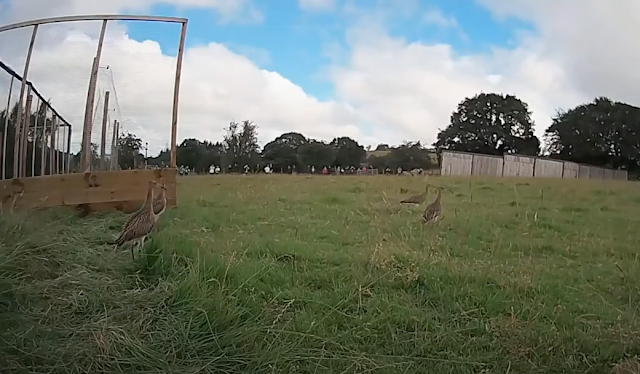 For the past few years I have been working for Curlew Country on the Shropshire/Powys border trying to help maintain the small, remnant, lowland Curlew population there. In the initial years our attention was spent trying to collect information on what exactly were the problems and how we might alleviate them. Quite rapidly it became apparent that the problems were major and that drastic action was needed. In 2017 we pioneered Curlew headstarting, taking eggs from nests with low probability of success, and rearing chicks in captivity to the point of fledge and then releasing into suitable natural habitat. This year, after an enforced break in 2020 due to Covid, we released another 33 young Curlews, making a total of nearly 100 since we began. The link below shows some moving images of the release of the second batch of chicks in 2021

Hopefully some of these birds will return to breed and help keep the iconic bubbling song of the curlew a feature of the Welsh Marches. Please keep yours eyes peeled for colour-rings on any Curlew you may see anywhere and report, it may even be one of those shown in this video!

Over the last 20 odd years records of Hobby in summer have increased in Ceredigion. Tregaron Bog and Borth Bog have been favoured sites as the birds hunt the plentiful supplies of dragonflies. More random sightings in farmland have hinted at breeding birds becoming established and breeding was confirmed for the first time in the county just a few years ago.

A couple of days back, I was contacted by a friend and ex 'C' ringer of mine to say he had a pair of Hobby nesting not far from his house and did I have a schedule 1 licence to ring them? Well, fortunately, I do, so yesterday, having obtained the landowner's permission Silvia and I went over to check the nest and see if it was safely accessible. 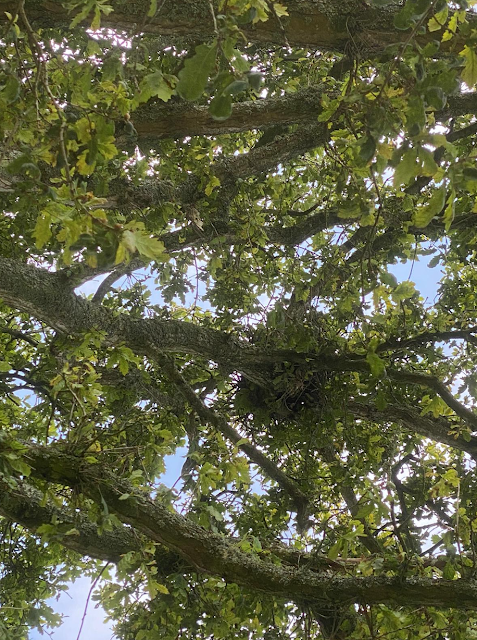 The birds were breeding about 30ft up in an old Carrion Crow's nest in a hedgerow oak, still well within my rapidly diminishing capabilities!  A few throws of the rope and 10 minutes later the chicks were safely on the ground but for one of them the visit was quite literally life-saving. The younger male chick had managed to get his leg badly entangled in the veritable spider's web of baler twine that the crow's had brought in as nest lining. 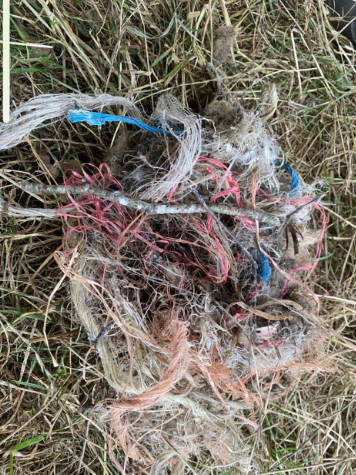 His foot was quite swollen and the leg itself a bit 'pinched' but once the twine had been cut away it rapidly improved with the swelling disappearing almost instantly and the foot becoming a bit more normal in colour. 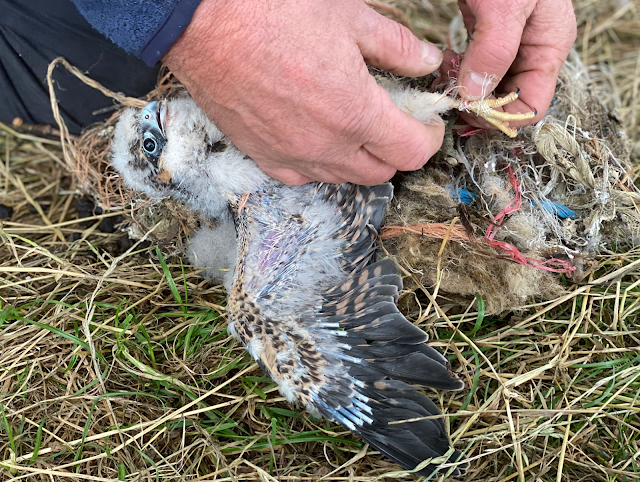 Without our intervention this chick would have died a slow and miserable death as the adults would eventually have been forced to abandon it and it would have starved, unable to leave the nest. As it is it appears that being restricted in movement has led to him developing less quickly than his female brood-mate. 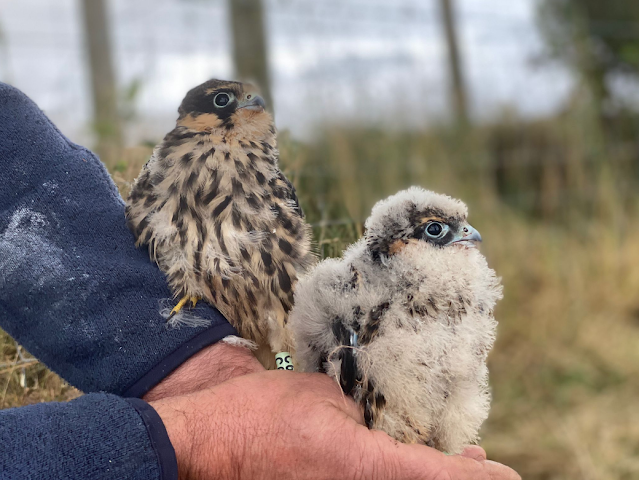 As far as I am aware these are the first two Hobby pulli ever ringed in Ceredigion and they may be only the second and third Hobby ever ringed in the county. We were fortunate enough to catch one "accidentally" on Both Bog a few years ago as it pursued a Cuckoo across the reedbed.

Both chicks were colour-ringed so we look forward to receiving sightings of them in the future, hopefully settling locally and expanding our breeding population of this stunning little falcon.