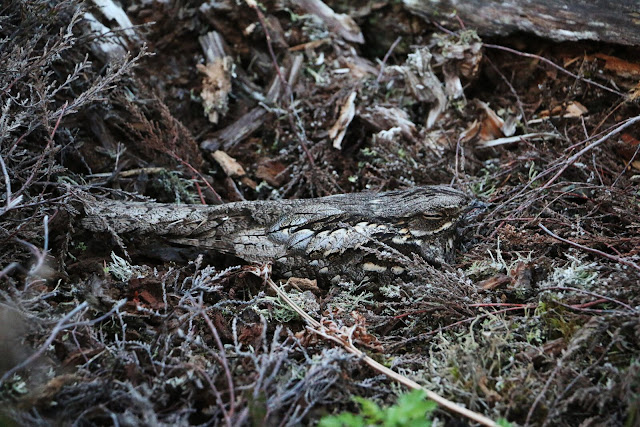 Over the past month and a half I've spent pretty much every night out tagging, tracking or nest-finding Nightjars at two sites at either end of Wales. Both sites are major wind farm developments in the construction stages and the Nightjar monitoring is part of agreed planning conditions aimed at avoiding disturbance to breeding pairs and assessing any effect of the developments on the resident Nightjar populations long-term. Two or three years of pre-construction monitoring at each site will be followed by post construction surveys and the results can then be used to inform any similar future developments.

One of this year's nests in South Wales was very close to a major track upgrade and, whilst I was sure the passing lorries etc wouldn't disturb the birds during the day as long as a suitable buffer zone was instigated, the earthmovers did need to get quite close! As there was a significant cost to any delay Mike Shewring and Dan Carrington (onsite ecologists for Natural Power Limited) and I agreed to install a nest-camera to monitor any disturbance so that operations could be go ahead but be instantly halted if the birds were disturbed. As the above clip shows, all progressed well and the single hatched chick fledged successfully last week.

Another part of the monitoring, being conducted in conjunction with the British Trust for Ornithology and Natural Power Limited, is using state-of-the-art GPS dataloggers to record the Nightjar's location to a high degree of accuracy at frequent intervals in order to study their foraging patterns. We tried this a few years ago using conventional radio-tags and it was almost impossible to keep track of the birds. These new tags record the bird's location to within 10m every 3 minutes!!! 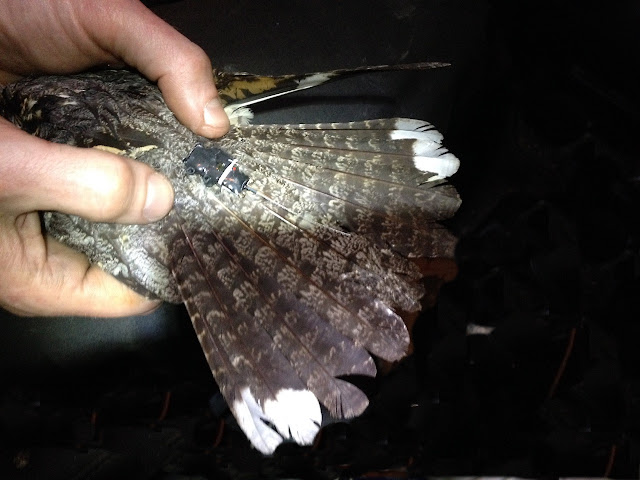 The downside is they cost about £350 each and you need to retrap the bird to get them back so that the data stored onboard can be downloaded. We have so far deployed 4 tags in South Wales and on the night of the 21st/22nd, on one of  my most successful Nightjar trapping sessions ever (7 birds - 4 new and 3 retraps), Mike and I recovered our first tag. 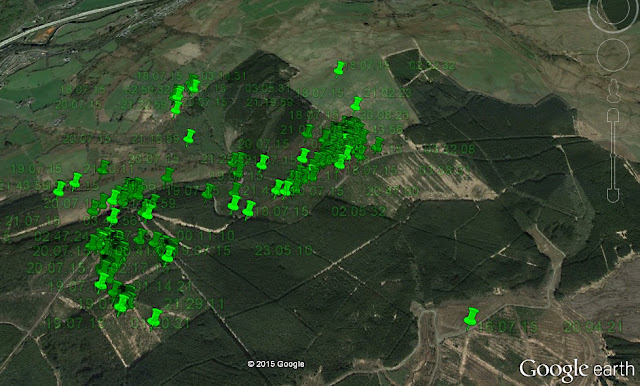 As the map above shows the bird in question didn't move very far in the 5 days the tag was recording but the results are, none-the-less, nothing short of amazing - effectively over 650 retraps in 5 days!!  There is a massive potential here to finally get to grips with exactly how these upland Nightjars cope with the vagaries of the Welsh weather and where exactly they go to find moths when it is doing what it often does in Wales - p***ing it down!! 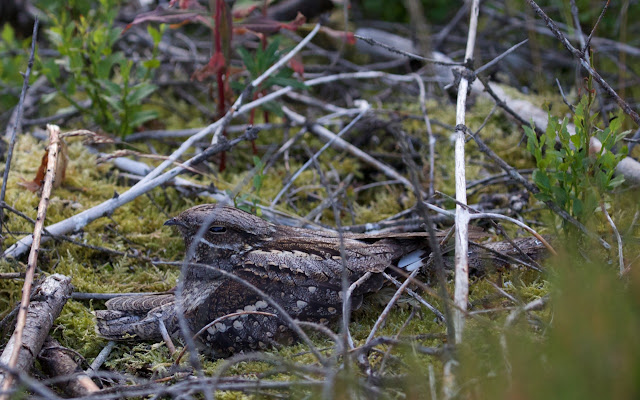 Despite the awful summer we are having the Nightjars seem to be doing rather well. So far 11 chicks have fledged from 7 first brood nests and 4 of the females are currently back down on eggs so hopes are high that we can deploy and retrieve a few more tags yet.
Posted by Tony Cross at 17:20 2 comments:

Once again Silvia and I find ourselves in the heart of Transylvania for 8 weeks surveying the bird life as part of a 5 year pilot project into how beneficial the traditional farming methods are to all the wildlife out here. While Silvia is carrying out point count surveys in the surrounding of each of the 8 villages we are surveying, I am misting netting at 1 sometimes 2 sites in each village to closer monitor individual birds and to get a better idea of population sizes of certain species. Netting always seems to turn up the odd species that tend to hide away in the thickets and avoid being detected during the point count.

With so many awesome species out here it's difficult to choose which photos to post, so below are a small selection of some of the birds that have stood out for me. 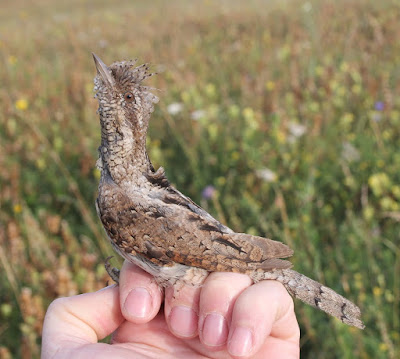 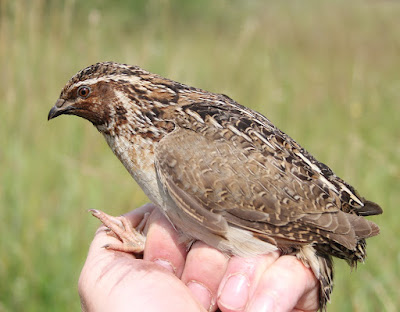 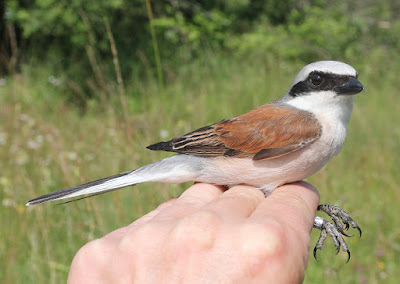 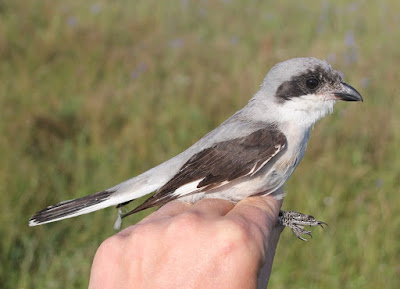 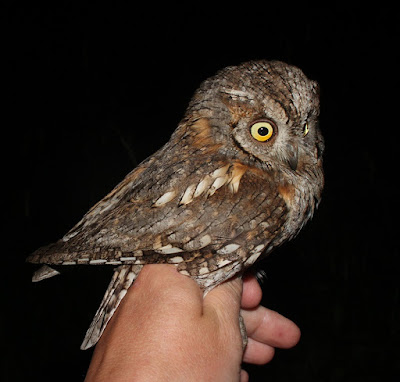 
As nice as it is to catch all of these species, we're also catching lots of species that were once common all over the UK. Species such as Tree Sparrow, Woodlark, Green and Lesser Spotted Woodpecker are still very common here, and hopefully with the work we're doing here with Operation Wallacea and Fundatia Adept they will continue to be common throughout the region. 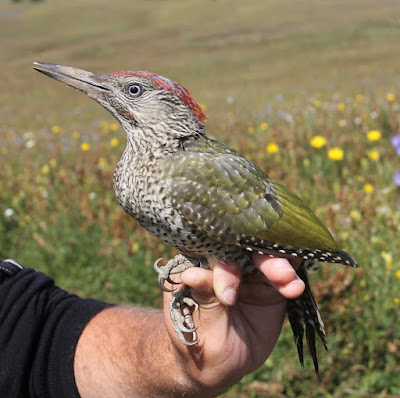 
We are half through the project and so far we've caught just short of 500 birds of 34 species. At the end of the 8 weeks I will post a complete list of the totals. Some of the totals are already standing out. I've ringed more Tree Sparrows in just 4 weeks here than the Mid Wales Ringers have collectively ringed since we started the blog in 2011!!
Posted by Paul Leafe at 19:08 2 comments:

That ain't no Nightjar!!

At the moment I am in the thick of two Nightjar contracts, one in South Wales and one in North Wales. This means that I spend most of my time in a state of near continuous sleep deprivation in midge infested forests or driving from one end of Wales to the other.  I'm not moaning, Nightjar's are one of my favourite birds and I am very lucky to be able to make a living studying them. The problem with Nightjar ringing, if there is one, is that because of the time of day and the places the nets are set that is pretty much all you catch - Nightjars or nothing. Last night in South Wales, Mike Shewring, Dan Carrington and I had a  large and welcome addition to the night's Nightjar catch. Whilst driving from one part of the forest to another I had noticed a couple of birds roosting on a low cliff just above the track. Having previously failed (by the narrowest of margins) to lamp one of them off the ledge I was pleased to see they were back again last night and willing to let me have another go! 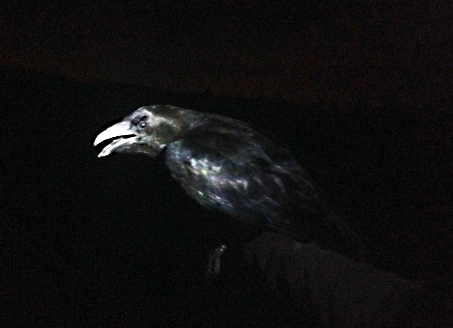 An iPhone record shot just before it ripped a great big gash in my thumb!!

I have ringed plenty of Ravens in my time, having studied them in Wales and Shropshire, but rarely did I manage to catch an adult. They seemed to be able to spot any sort of clap-net or cage trap as something to stay well away from, confirming their status as perhaps the world's most intelligent bird.  A short while later, wrestling one in the dark, it didn't seem like such a good idea after all!!  Ravens are well known for being able to tear flesh off carcasses and it appears you don't have to be dead for them to try! 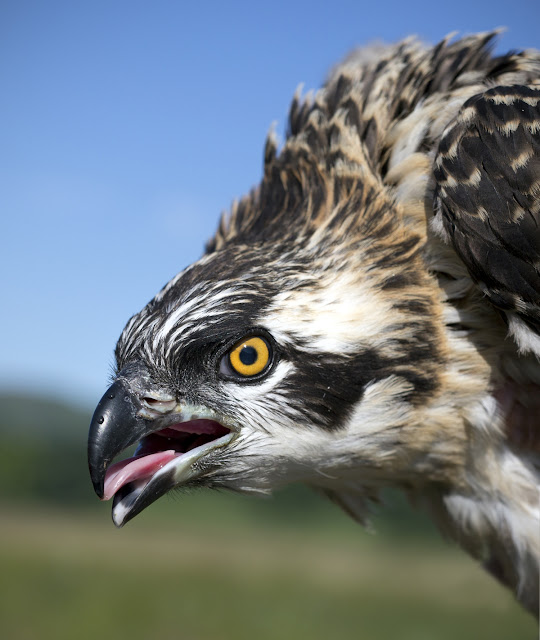 I was going to put a short post up about the Dyfi Osprey ringing this year but why bother when Emyr has already done such a brilliant job? Here's the link - I'm sure you will enjoy the video (and the soundtrack)