A little bit of magic...

After several nights up on the hills trapping and ringing 'our' wintering waders, Silvia and I decided to head to the coast to try for some different waders at another one of our wader ringing sites. The first night we went out we weren't really too sure what would be there so we didn't bother to ask Tony for colour-rings, which was a real shame because we managed to trap and ring 4 Redshank and 2 Oystercatcher - both of which we colour-ring. We also caught 11(+1) Turnstone, which we are hoping to get a similar colour-ringing project on the go as we seem to have found a more effective way of trapping them. Either that or there's just a lot more about, but whichever it is, it would be great to get some re-sightings of them.

The second night, we made sure we had enough of each colour-ring and made the trip down to the coast again. There were still plenty of birds there, but they were proving a lot harder to catch. By the end of the night we were actually a little disappointed having only caught 2 Golden Plover, 1 Redshank and 2 Turnstone (this was a good catch, but we just had our hopes set a little higher after the catch from the night before). Walking back to the car a little deflated, I couldn't believe my eyes when I saw a small bird of prey sat in the field. It was a MERLIN!! After a couple of short flights, I dropped the net on it and slowly came to terms with what had just happened!!!

As Tony was ringing just up the road, I asked if he could quickly drop a colour-ring off for it - this was one of the few we didn't have with us!! By the time we were back at the car, Tony was there with the colour-ring.

Going by the size (wing 213, weight 182) and plumage of the bird it seemed like an obvious juvenile female, but after looking a bit closer at some of the plumage details I wondered if it could possibly be a juvenile Icelandic race Merlin - I'm still waiting to hear back from some people who are more familiar with these birds. 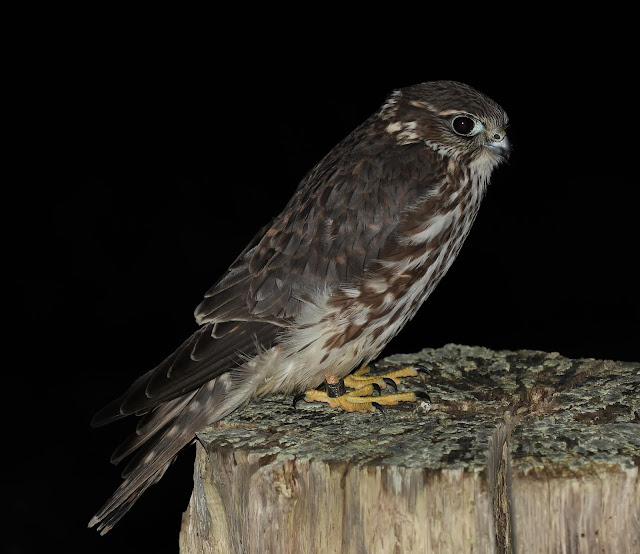 With no trees anywhere near, I placed the bird on a nearby post and waited for it to fly off to find it's own roost place for the night. It's going to take a lot to top that!!
Posted by Paul Leafe at 21:38 1 comment: