A tale of two finches

2018 has been an interesting year for finch ringing here in Mid Wales in very different ways. Our Hawfinch RAS project got off to a brilliant start both in terms of new captures and re-sightings of colour-ringed birds with 125 new birds ringed (bringing the grand total to over 1,000 individuals in just 8 years) and there were also 1,342 recaptures or resightings. 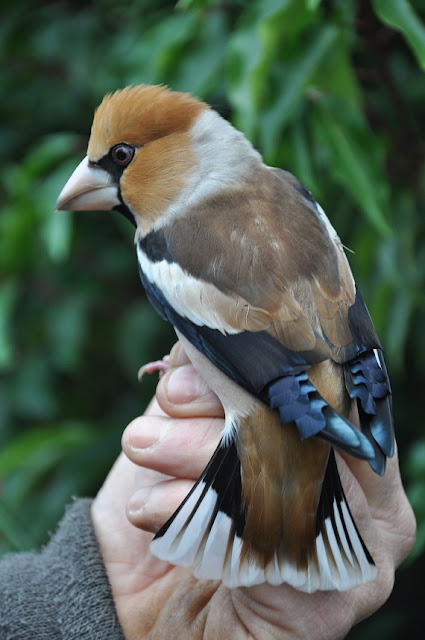 
In late April however the wheels came off when we started to notice an increasing number of birds showing signs of trichomoniasis, a condition cause by the protozoan Trichomonas gallinae. This disease has been well-known to affect Greenfinches but has previously been little reported in Hawfinches, although we have seen the odd sick bird in previous years. In April 2018 Trevor and Chris Bashford, owners of Britain's best Hawfinch garden (over 240 different identifiable individuals in 2018 alone!!), were reporting regular sightings of sick birds despite diligently cleaning and disinfecting their feeders. Numbers were so worryingly high that I asked everyone to stop feeding immediately at all our feed sites and effectively brought our year's ringing activities to an abrupt end. A local press-release by BTO Cymru's Kelvin Jones requesting other local bird-watchers to do the same was well-heeded and many brought their feeders in for a while. Sick birds were continuing to be reported well into June however. It was heart-breaking to see familiar faces (well, familiar legs!) fluffed-up and struggling to swallow. Whilst their is a treatment that can be used, once the condition becomes noticeable in an individual it is too late, the infected bird rarely lasts more than a few days. Early diagnosis would involve opening the birds beak and looking down its throat but that is pretty much impossible, and potentially very painful!!  Some of these birds have been regular attendees over several years with many tens of re-sightings each and then nothing!

Entering all the data for the year from Trevor and Chris's log-book just recently has brought the scale of the problem back into focus and it was devastating to note the inevitable disappearance of old regulars following a few days of them being noted as "sickly".  The potential scale of this problem is demonstrated in the staggering fact that during the whole year, targeting finches in several locations the Group never caught a single Greenfinch!! For the first year ever I cannot remember seeing one in my garden either.

In late June, as is usual, the surviving Hawfinch dispersed into the countryside to take advantage of the rapidly ripening natural bounty of seeds and berries and feeding at garden feeders became a rare event until late December. Hopefully the decreased potential for disease transmission in these feeding conditions and the exceptionally dry summer has reduced the protozoan numbers. This year's Hawfinch RAS project is up and running and, fingers crossed, there have been few signs of a repeat of last year's tragedy and it is heartening to see some very familiar old stagers have made it through. Clearly some birds must be immune, or at least more immune, than others but, none-the-less, if we have a repeat incident this year we will not hesitate to bring proceedings to a halt again. I am not sure how effective our stopping feeding can be with so many others now feeding too but the health and safety of the birds must always come first.

On a much brighter note, this winter's Brambling catching has been record-breaking with Paul and I ringing nearly 1,500 Bramblings between us so far at 3 main catching locations. It is a bit early to expect any recoveries but we have controlled 6 foreign-ringed birds (2 from Sweden, 2 from Norway, 1 from Belgium and 1 from the Netherlands and have had 5 British controls too. An additional Norwegian-ringed bird was id'ed by Kev Joynes, a local bird-photographer. I will post a map showing all the locations of origin as soon as we get them all back. 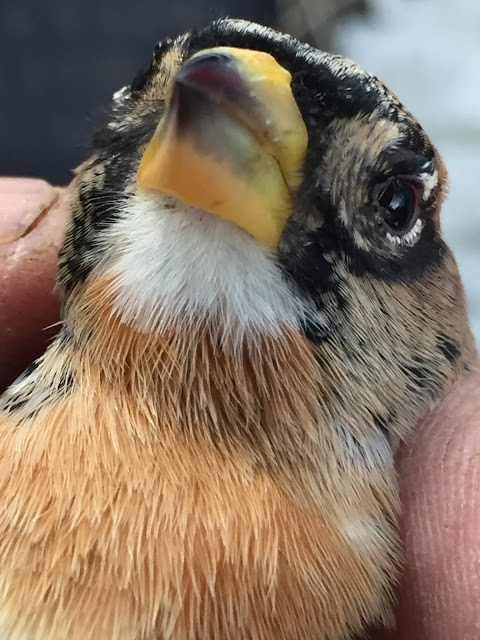 A rare 'pea-throat' male Brambling, one of only two such individuals caught